London-listed but India-focused coalbed methane (CBM) producer, Great Eastern Energy Corporation (GEECL), is expected to start shale gas exploration in its flagship Raniganj (South) block in the eastern Indian state of West Bengal by the middle of 2020, according to the company’s CEO Prashant Modi. 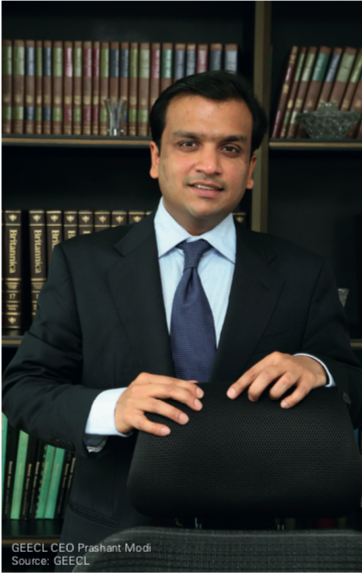 GEECL is expected to invest $2bn for the full development of shale resources over the next five to seven years.

“We are waiting for final government approvals; we hope to get them soon. The West Bengal government has to amend its existing mining leases, so that we can start production of shale gas. I cannot give you a timeline but our estimate is that by middle of 2020 we should start with the coring. The company expects to start initial shale gas exploration work of drilling core wells and depending on the results obtained and analysed from the core wells, we thereafter intend to drill an optimum number of pilot production wells,” Modi said.

Once the approvals are in, the company will start the process of bringing the drilling equipment into India, which should take a couple of months. According to Modi, GEECL is already talking to contractors. “We are already in discussion with contractors; however, I will not name them right now,” he said.

GEECL is the oldest CBM producer in India and has assets in the eastern Indian state of West Bengal and southern Indian state of Tamil Nadu. Its Raniganj (South) block, which is its only operating asset, covers an area of 210 km²; while the Mannargudi licence in Tamil Nadu is the object of an arbitration case with the Indian government. The Ranijganj (South) block holds estimated shale resource of 3.51 trillion ft3 under a best estimate - with high and low estimates of 6.63 trillion ft3 and 1.4 trillion ft3 respectively – according to an independent assessment by ARI.

The company is supplying gas to several industrial customers through its dedicated pipeline and is supplying compressed natural gas (CNG) through a franchise agreement with state owned firms Indian Oil Corporation and Bharat Petroleum Corporation.

In addition to the investment plans for shale gas drilling, GEECL is also planning to invest about rupees 20bn ($280mn) for drilling additional CBM wells over the next four to five years, Modi said. GEECL has 150 wells operating at its Raniganj block and average production stood at 16.6mn ft3/day in the second half of October.

Modi said that revenue was impacted by mild deceleration in industrial growth and the steel sector as a result of the general economic climate; however, he added that things are looking up and the Indian economy is showing signs of uptick.

Reforms initiated by the government

In order to enable the realisation of prospective hydrocarbon reserves in the existing contract areas which otherwise would remain unexplored and unexploited, the government tweaked the rules in 2018. They now permit exploration and exploitation of all types of hydrocarbons including shale gas resources under the existing CBM contracts. Also, the government has ushered in reform in the shape of pricing and marketing freedom and the revenue sharing model.

“First, both are unconventional hydrocarbons and the extraction of shale gas requires huge amounts of water during both drilling and completion. CBM is produced by continuously dewatering the CBM wells in order to extract the gas. Hence, the water produced during CBM production can be used for shale gas exploration.  Moreover, the surface and compression facilities are already in place for CBM being produced and these can be readily used for shale gas as well,” he said.

Despite having one of the largest coal reserves in the world, India’s CBM sector has suffered from the lack of a policy framework, which the government has tried to correct to some extent in recent years. However, more steps are needed if Indian CBM sector is to perform to its potential. The government has so far awarded 33 blocks for extracting CBM but only a handful are operational. Modi said that the Indian government should look at re-auctioning these relinquished blocks as this would enable more CBM production.

“Of the 33 blocks that were initially offered, only four to six are still operational. All these blocks that have been relinquished for whatever reason should be put up for auction again. The advantage is that the blocks have been already carved out and the data package is also ready,” Modi said.

He further stated that GEECL would be open to bidding for these blocks if it makes sense for the company. “If these blocks come up for auction again, we will definitely evaluate. There are some blocks in which we maybe be interested in. However, I would not like to go into details at the moment,” Modi said.

The present Indian government has been focusing on growing gas demand and it has set a target of raising the share of natural gas from 6-7% in the overall energy mix today to 15% by 2030. Modi believes that this growth in demand for gas will come from the transport, city gas distribution, industry and power sectors.

“I believe that a variety of sectors will drive the demand for growth in India. At today’s price natural gas is very economical for India. Also, the government’s focus on building infrastructure such as pipelines will help in creating demand,” Modi said.

State-owned Gail is working on the 2,650-km Jagdishpur – Haldia & Bokaro – Dhamra Natural Gas Pipeline, also known as the Pradhan Mantri Urja Ganga. The ambitious project is presently under construction and likely to be completed by the end of 2020. It will pass through the eastern Indian states of Uttar Pradesh, Bihar, Jharkhand, West Bengal and Odisha. The pipeline is being further extended from Barauni in Bihar to Guwahati in the northeastern state of Assam through a 729-km pipeline.

Modi said the pipeline will give GEECL access to the huge market of Kolkata – the capital of West Bengal – and also to other parts of the state.

“The demand is there and now the government has been streamlining the policies as well as focusing on building the infrastructure. We are very bullish about the gas sector in India,” Modi said.