UK-listed Great Eastern Energy Corporation (GEECL) is the oldest coalbed methane (CBM) producer in India and has assets in the eastern Indian state of West Bengal and southern Indian state of Tamil Nadu. Its Raniganj South block, which is its only operating asset, covers an area of 210 km²;while the Mannargudi licence in Tamil Nadu is under arbitration with the Indian government. 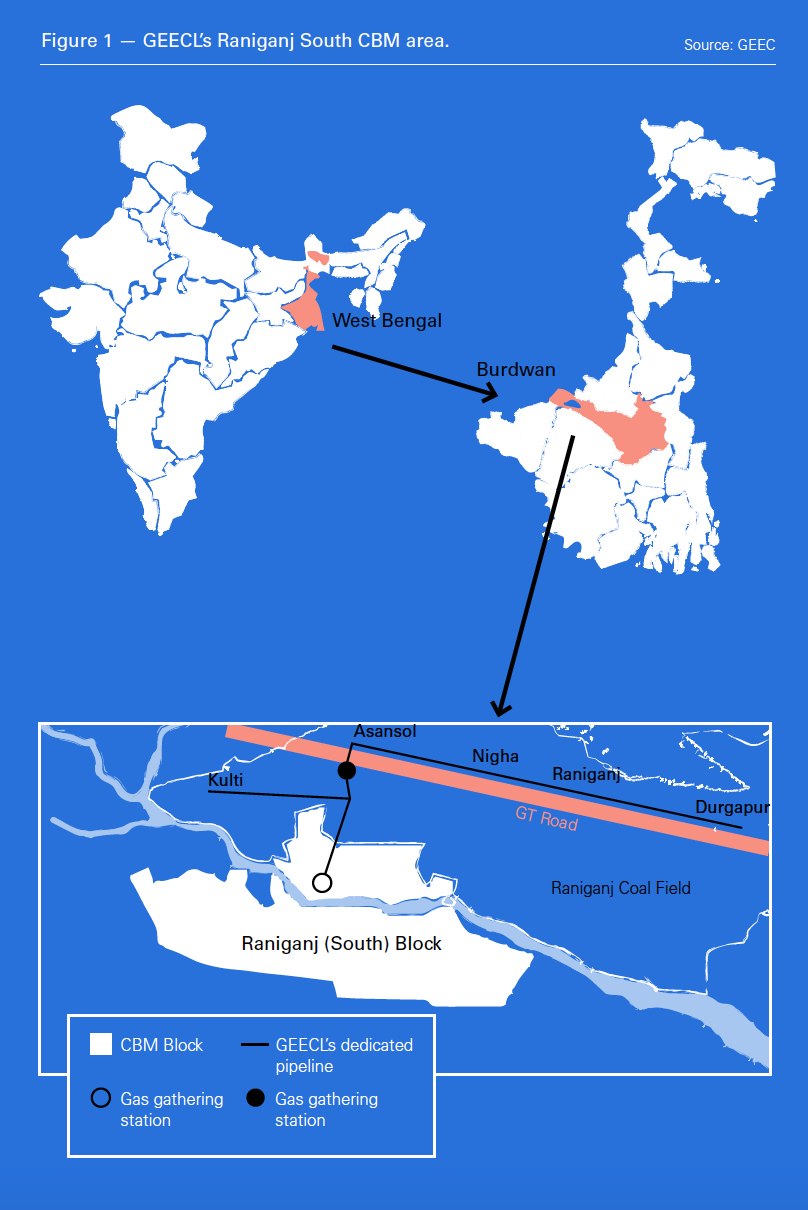 GEECL’s production for the year April 1, 2017-March 31, 2018 was up by almost a fifth – 19.5% – on the previous year, to 19.61mn ft3/d. Sales rose almost a quarter – 23.4% – to 10.69mn ft3/d. The company is supplying gas to several industrial customers through its dedicated pipeline and is supplying compressed natural gas (CNG) through a franchise agreement with state owned firms Indian Oil Corporation and Bharat Petroleum Corporation.

Despite having one of the largest coal reserves in the world, India’s CBM sector has been suffering from the lack of a policy framework. The government has so far awarded 33 blocks for extracting CBM; but only a handful are operational. India’s overall CBM production remains minuscule despite showing a growth in the last fiscal year. The three CBM-producing states in India – Jharkhand, Madhya Pradesh and West Bengal – produced 735mn m3 then, which was up 30% year on year, according to India’s oil ministry data.

In addition to GEECL, only two other private sector companies, Reliance Industries and Essar Oil, are commercially producing CBM in India. But the government has undertaken some significant policy reforms to boost production, last year allowing CBM producers to market and price the gas freely in the domestic market. CBM producers have also been permitted to sell the gas to any affiliate, in the event a contractor cannot identify any buyer.

Pick up in investment

Investment in the sector is likely to get a fillip, with producers now free to sell gas at market prices. GEECL is looking to go on a substantial investment drive in its Raniganj South block over the next few years. “We plan to invest another rupees 20bn ($280mn) for drilling an additional 144 CBM wells over the next four to five years,” said GEECL CEO Prashant Modi, without saying how much the output will go up by as a result.

Like GEECL, Essar Oil is looking to produce more from its Raniganj East block. The company said it plans to double output from the block, which is also in West Bengal. Essar has five CBM blocks in its portfolio but Raniganj East is the only operational one. The other four are Rajmahal in the state of Jharkhand, Talcher and Ib Valley in the state of Odisha and Sohagpur in the state of Madhya Pradesh.

The reform in the shape of pricing and marketing freedom that was announced last year has been followed up with another major decision that will provide an additional boost to unconventional hydrocarbon exploration in India. In August 2018, the government allowed oil and gas exploration companies to explore for unconventional hydrocarbons such as shale gas and CBM under their existing contracts.

Under the old regime of production-sharing contracts (PSCs), contractors were not allowed to explore and exploit CBM or other unconventional hydrocarbons in already allotted licensed/leased areas. Similarly, CBM contractors are not allowed to exploit any other hydrocarbon except CBM. Acreages held at present by various contractors in PSCs and CBM blocks and national oil companies (NOCs) in the nomination regime constitute a significant part of India’s sedimentary basin. The government is of the view that this policy will enable the realisation of prospective hydrocarbon reserves in the existing contract areas which otherwise would remain unexplored and unexploited. 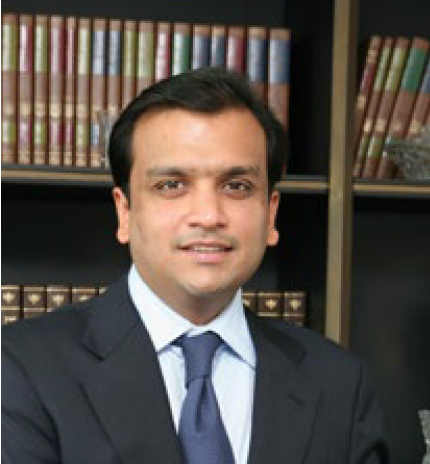 “This is a welcome move as it will enable companies to explore all hydrocarbons in their respective blocks, thereby increasing the domestic production of untapped resources and help in reducing hydrocarbon imports,” Modi said. “Yes, we will look into the feasibility of exploring shale gas in our block.”

Modi believes there are some synergies between CBM and shale gas exploration. “First, both are unconventional hydrocarbons and the extraction of shale gas requires huge amounts of water during both drilling and completion. CBM is produced by continuously dewatering the CBM wells in order to extract the gas. Hence, the water produced during CBM production can be used for shale gas exploration,” he said. “Moreover, the surface and compression facilities are already in place for CBM being produced and these can be readily used for shale gas as well.”

A number of the reforms that the present Indian government has undertaken are to boost domestic gas production. India is looking to reduce its reliance on imports as well as working on increasing the share of gas in the overall energy mix. According to Modi, if the share of gas in the energy mix is to double to 15% over next five years, the government will need to take some more critical steps.

“First, the inclusion of natural gas under the ambit of goods and services tax (GST) is crucial as it will enhance domestic exploration and production of natural gas, thereby increasing India’s energy security and reducing our dependency on imports. Further, GST will benefit both the producers and consumers as the offset will be available to both, and it will help to increase the share of natural gas in the energy mix,” said Modi.

Another issue that the government will need to address is insufficient pipeline capacity, if it wants the economy to use more gas. There has been some progress on this front. Recently, state-owned Gail said it plans to boost its gas pipeline capacity by over 50% in the next three years. It will add 5,500 km of pipeline in phases over the said period. Gail is moving ahead with the ambitious $2bn Jagadishpur-Haldia-Bokaro-Dhamra Natural Gas Pipeline (JHBDPL) also known as Pradhan Mantri Urja Ganga. This 2,539-km pipeline is expected to be fully completed by December 2020. The first phase of the pipeline will be complete by end-2018 and the second phase by end-2019.

“A nationwide pipeline network, which is in the making, will provide easy access to gas to various consumers,” he said.

India’s gas demand will grow more or less strongly according to the price of other fuels, according to the director of marketing at Gail (India) Gajendra Singh. That could include new policies to promote it over coal.

He told NGW Septembr 20 that there might be the need to buy some 30mn metric tons/year LNG equivalent to supply India’s almost 25 GW of connected and commissioned, but currently idle, gas-fired power capacity; but for now, coal and renewables are cheaper. “We are pursuing this with the government,” he said. “Thermal [gas] power should have an advantage so it can compete. We are pushing for some cost advantage for the cleaner fuel,” he added, which could include carbon pricing that would hit coal harder than gas.

It is unknowns such as this that make it difficult to work out how much gas Gail – an aggregator for India’s city gas distributors – needs to buy. However, there is the need for at least some more because demand for domestic heating and cooking, for transport and for the power sector is growing in aggregate at 14%/yr as the low-pressure grid is expanding rapidly.

But Gail’s own customers do not want to buy for more than five or six years out as they cannot foresee their own demand as competition from other fuels rises. Gail’s own long-term purchase contracts might be for three or four times that length.

Gail at the moment offers its customers contracts linked to US gas prices, oil prices or a mix of the two, or of other liquid fuels.

According to some industry observers, Asian spot LNG prices for the winter are at parity with long-term LNG purchase agreement linked to dated Brent; but in the past few years its own customers have complained that the oil-indexed LNG price had – after the oil price collapse of 2014 – no relation with the LNG market.

Gail had some success in negotiating with three of its major long-term suppliers – RasGas in Qatar, ExxonMobil (Gorgon LNG) and Gazprom, all of which sell on oil-indexed terms – but Singh stressed it was achieved on a “win-win” basis. So price reductions or lower take-or-pay commitments than the original 100% would be matched with contract extensions or carry- over of take-or-pay gas. “I have to say it is a complete package,” he said.

Gail is also in talks, so far inconclusive, about the possibility of renegotiating its US LNG contracts: one is with Cheniere and one with Dominion. Both are indexed to the most liquid US gas hub, the Henry Hub. “If one link in the supply chain breaks, the whole chain collapses,” he said, explaining the benefit of collaboration. But for now he said those US prices are fine.

While US Permian Basin gas is attractively priced - it is often incidental to oil production, priced off the Waha gas hub, and thus cheaper than Henry Hub – Singh said also that domestic Indian production is due to grow, assuming that the plans submitted to the government materialise. He said that Indian domestic gas is the cheapest: “By 2021 there will be an extra 15mn mt/yr equivalent of domestic gas production.” At the moment, wellhead prices are reset at six-month intervals, output from the high pressure high temperature fields being sold at $6.70/mn Btu and other gas at $3.06/mn Btu, he added.

So US gas at $3.50/mn Btu such as Tellurian is offering – along with an equity stake – would compete with the former, but not the latter. But it depends on the price of Indian gas production, and on the power-generation market some years into the future, these being among the many known unknowns that Gail has to handle.