Update with new independent data from the European Environment Agency at end....

Increased use of natural gas by power plants, homes and vehicles can significantly reduce air pollution – a direct cause of around 400,000 deaths* across the EU in 2012 – according to an International Gas Union report, Case Studies in Improving Urban Air Quality, published November 23.

It cites new research highlighting the correlation between reducing air pollutants and the greenhouse gas (GHGs) that contribute to climate change. Citing case studies in four European cities where GHGs and air quality have been improved by displacing coal and fostering gas use, the study examines policies -- such as fuel switching initiatives -- that have led, or are leading to, improvements in air quality without sacrificing economic growth.

"Air pollution is a significant threat to the environment and human health. Action taken in Berlin, Dublin, Krakow and Rotterdam demonstrates the central role of gas in improving air quality in urban areas,” said IGU president David Carroll. He added that switching from coal to gas-fired power is often the fastest and most cost-effective approach to improve air quality and reduce GHG emissions. 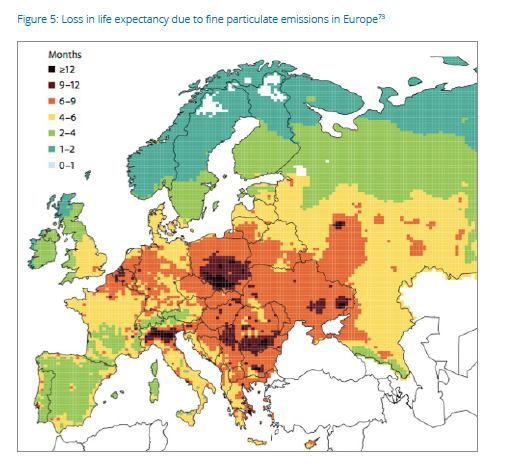 In Berlin, the report finds that, since the Wall came down in 1989, sulphur oxide (SOx) emissions have fallen by 95%, Nitrous Oxide (NOx) emissions by 76%, and Particulates (PM10) by 83%, with the city actively promoting compressed natural gas (CNG) as a vehicle fuel.

In Dublin, it found that benzene, carbon monoxide, SOx and smog levels had fallen steeply since 1990.

In Krakow, which had the worst air pollution of any European city larger than 500,000 people, a city-wide coal ban was introduced in January 2016, with a deadline of 2019 to completely phase out coal stoves from home heating, with grants available to switch to gas heating.

A Rotterdam resident’s lifespan in 2014 was on average three years shorter than the average Dutch citizen; switching to LNG in the port should reduce its NOx emissions by up to 90% and SOx and PM by up to 100%.

The report comes a day after US President-elect Donald Trump appeared with coalminers in the US on television, saying his administration would promote the fuel, and might roll back climate action policies initiated under Obama. Paradoxically Trump also conceded that human activity may be to blame for the increase in global warming, after a campaign in which he largely characterised it as a lie.

Gas producers have identified coal's impact on GHGs in the past but often focused less on the impact of pollutants on urban air quality and premature deaths, sometimes because they and European utilities included coal production or generation among their businesses, or for fear that oil might also be targeted. In recent years though, firms like BP, EDF, Engie, Gas Natural, Total and Sweden's Vattenfall have scaled back or divested from coal activities.

* The IGU report was released prior to publication November 23 of a separate independent study by the EU's European Environment Agency.

Based on 400 cities, this EEA study says that air pollution remains the single largest environmental health hazard in Europe, causing an estimated 467,000 premature deaths per year (2013 estimates) across Europe, of which 436,000 in the EU-28. "EEA report on air quality reminds us that we need to keep this subject high on the political agenda," said EU environment commissioner Karmenu Vella.