The International Energy Agency (IEA) sees the present length in the global gas market – as evidenced by spot prices lower than oil-indexed prices would be – continuing, with "heavy oversupply" until 2018. But upstream investments will remain low, setting the course for higher prices by the early to mid-2020s, its latest Medium-Term Market Report for gas says.

“We see massive quantities of LNG exports coming on line while, despite lower gas prices, demand continues to soften in traditional markets,” said IEA CEO Fatih Birol. These contradictory trends will both impact trade and keep spot gas prices under pressure.” He added that the combined factors of cheaper coal and continued strong renewables growth were blocking gas from expanding more rapidly in the power sector.

Net imports to Europe are projected to increase by roughly 40bn m³/yr over the next five years as demand growth, albeit very slow, and falling production push import requirements to record highs. Some of this will come as LNG, as Japan, China and Korea move from short to long positions; although Europe’s ability to absorb additional LNG is limited by cheap coal and increasingly competitive Russian supplies.

The report also dwells on how Russian gas will reach Europe, in particular the relative merits of Ukraine and Nord Stream. Ukraine now transits 63bn m³ – or 40% of total Russian pipeline exports to Europe (including Moldova).

Gazprom is determined to minimise flows through Ukraine – although the report says that flows have been very reliable for a few years, especially given all the problems the country has to deal with – and yet expanding Nord Stream is also problematic contractually and physically, not to mention politically. This last is an area the report steers clear of.

Gazprom is the major stakeholder of the project, with a 50% share, while the remaining stake is split among Engie, BASF, Shell, E.ON and OMV, who do not own any capacity but collect on transit fees. If this 55bn m³/yr expansion is realised, total transit capacity through Nord Stream would be 110bn m³/yr, more than enough to displace all gas transiting Ukraine to the EU.

But gas flows would need some reconfiguring. Gas today is contracted to delivery to Eni, Austrian Econgas and generally south/south-east companies at Baumgarten – the border point from Slovakia into Austria. But shifting the contractual delivery point for all that gas, as Gazprom has proposed, to the Nord Stream landfall at Greifswald instead would require complex capacity bookings between north Germany and Baumgarten, leading to price renegotiations, and more pipeline links having to be built, it says.

Given the above bottlenecks, even with an expansion of Nord Stream, it is likely that Turkey’s fast growing Istanbul region, Moldova and probably Hungary, Bulgaria, Greece, the Balkans and parts of Italy would still need to be supplied via Ukraine. This could amount to about 40-45bn m³/yr, about 25bn m³/yr less than was shipped through Ukraine in 2015.

It is also questionable if 110bn m³/yr supplied via one route would improve gas transportation security. Disruption of any serious kind to the Nord Stream pipeline system could affect up to 60% of Russian gas exports to Europe if the Yamal route, Nord Stream 1’s, precursor, is full. If Ukraine transit falls significantly, today’s large and flexible capacity is unlikely to be kept in working order.

For Ukraine, Russian gas transit is worth about $1.6bn/yr, used not only are used to cover the operational and investment costs of the system, but also help reduce Naftogaz’s deficit. Operating the Ukrainian gas transmission system effectively is significantly different depending on whether it handles 70bn m³/yr or 30bn m³/yr.

Gazprom’s success in launching Nord Stream 2 remains subject to resolution of a number of issues, the IEA says, including new supply terms with its European buyers such as outspoken opponent Eni; and how will Gazprom address the regulatory issues related to third-party access and the current limitations on the use of OPAL. 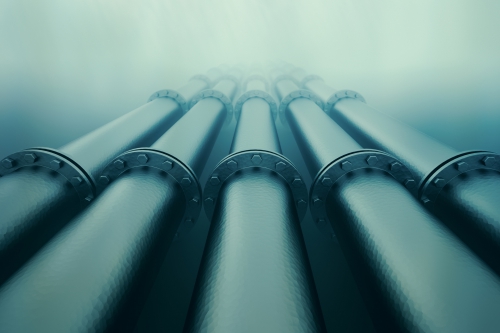 Overall, global projected demand growth of around 140bn m³/yr is not enough to absorb the 190bn m³/yr of new liquefaction capacity projected to come on stream between 2015 and 2021 and the supply side will need to do its part to keep the market in balance, including low use of export facilities.

However by 2021, the report expects demand and supply to have returned more into alignment. For new projects in particular, this suggests that returns on investments will be low for some years.

Similarly, the sharp compression of price differential among regions reflects a tendency for prices to move towards (and in some cases below) marginal costs of transportation – a natural development in an oversupplied market with no region needing to attract extra cargoes. Slower demand and converging prices have resulted in a trading environment less conducive to growth in spot and short-term transactions. It is not surprising, therefore, that after a long period of growth, spot and short-term transactions as a share of total trade declined last year.

But while persistent oversupply and compressed regional spreads are set to remain a drag on the growth in spot trading, there are more sellers and buyers entering the LNG market, meaning a longer chain of potential transactions. And the more flexible contract model governing US exports will naturally trigger growth in short-term and spot trading. How lucrative those transactions are seems to be the key question rather than whether they will occur at all.

In aggregate, the three top Asian LNG importers are likely to see their imports-to-contract ratio moving from a short position of around 40bn m³/yr in 2011 to a long position of around 20bn m³/yr in 2017-18. Korea, Japan and China all tapped heavily into the spot market until last year, to meet robust demand growth. The outlook for 2015-18 is remarkably different, as all three countries will likely have to enter the spot market on the selling side. Sellers will therefore be forced to chase new markets and new buyers.

Potential customers previously shunned as too risky or too challenging to trade with, often due to their low credit-worthiness or their small volume requirements, are now attracting the attention of LNG sellers. Lower prices make purchases financially more accessible thus lowering counterparty risks while sellers who sit on long-unsold positions are happy to take on more risk.

Pressure to renegotiate contracts will intensify and the sellers look likely to lose. Petronet took only about 70% of its contracted 10bn m³/yr from Qatar over a period of time, falling below minimal contractual obligations. But anxious to retain business, last year Qatar waived $1bn of penalties and they rewrote the formula to bring contract prices more in line with the level of spot prices.