The mammoth Fit-for-55 package presented by the European Commission on July 14, a set of policy proposals and legislative initiatives to ensure that the EU will reach its climate objectives, does not specifically target hydrogen or natural gas. A full-scale hydrogen and gas decarbonisation package is not expected from the Commission until December this year. However, various proposals and initiatives contain references to hydrogen – both “renewable” or “green” hydrogen (derived from renewable electricity through electrolysis) and “low-carbon” or “blue” hydrogen (derived from natural gas in combination with carbon capture and storage, or CCS).

Thus, the revision of the alternative fuels infrastructure directive (AFID) envisages one hydrogen refuelling station for every 150 km of Trans European Network for Transport (TEN-T) core network, as well as refuelling stations in every urban node. The amendment of the regulation setting CO2 emission standards for cars and vans mentions hydrogen as a decarbonisation option for heavy-duty vehicles in pursuit of emission reductions. The new FuelEU Maritime proposal covers all renewable and low carbon fuels, including decarbonised hydrogen and derived fuels.  Under the revised ETS electrolysers will now be eligible for free credits and the revised Energy Taxation Directive (ETD) will set preferential tax rates for the use of renewable and low carbon hydrogen.

The European Commission proposes a 50% target for “renewable fuels of non-biological origins” – essentially green hydrogen – in the share of hydrogen fuels used in European industry by 2030, whether as a feedstock or in final energy consumption, writes Euractiv. “Such a target can clearly help boost the share of renewable hydrogen in the European hydrogen market – currently 96% fossil-gas based – and drive its cost down, making it competitive with fossil-based alternatives,” said François Paquet from the coalition.

In addition, the Commission proposes a 2.6% target for “renewable fuels of non-biological origin” used in transport. Both proposals were welcomed by industry body Hydrogen Europe. “By putting targets on the use of hydrogen in industry and transport, the EU stands a real chance to achieve climate objectives, create thousands of jobs and protect its industry,” said Jorgo Chatzimarkakis, secretary general of Hydrogen Europe.

“Hijacking the recovery through hydrogen”

The proposed targets refer exclusively to renewable or “green” hydrogen. Yet this does not mean the European Commission has given up on the blue variant. To achieve the 2030 targets, “we will need also low-carbon hydrogen, not only renewables,” said Kadri Simson, the EU Commissioner for Energy, during the presentation of the package.

This is precisely what environmentalist NGOs in Brussels are objecting to. They want Europe to divest entirely from fossil fuels and reject any public support for blue hydrogen. For example, NGO Global Witness, “expressed concern that the European Commission had undermined climate ambition by promoting low-carbon hydrogen in parts of its (Fit-for-55) package.”

Energy consultant Mike Parr warned in Euractiv that “Northern Europe is in danger of locking itself into a subsidy-dependent blue hydrogen system where all the risks sit with the governments and all the profits with oil and gas companies.” According to Parr, “the only element keeping blue hydrogen projects alive are subsidies and as green hydrogen declines in cost more government subsidies will be needed. This might be good for Shell and Exxon but is unlikely to be popular with voters.”

NGO Corporate Europe Observatory (CEO), a “research and campaign group”, produced a report on July 8, a week before the release of the Fit-for-55 package, charging that fossil fuel companies are “hi-jacking the recovery through hydrogen”. The report notes that several EU countries are spending a considerable part of their “recovery funds” on hydrogen projects, including blue hydrogen. According to CEO, this is the result of “a concerted lobbying effort from the fossil fuel industry, who see hydrogen as a lifeline for their business models, as well as one of their main products: fossil gas.” 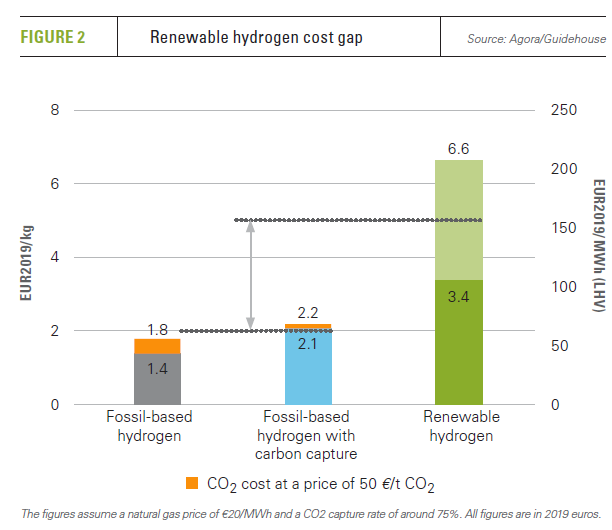 For example, CEO notes that in Italy “the government is spending more than €4.5 billion of EU funds on hydrogen and biomethane but only €4 billion on improving ICUs [intensive-care units} and medical equipment.” In Spain, The Renewable Hydrogen Roadmap has €1.6bn dedicated to it, 50% more than the budget for improving the national health system. But overall a pot of €17.8bn could be available to hydrogen projects.” In France, “the fossil fuels industry is playing a major role in France’s recovery plans and is strongly behind hydrogen, thanks to the government creating numerous public-private partnerships such as the all-industry National Hydrogen Council,” according to CEO.

At the EU level in Brussels, “Fossil fuel lobby groups in Brussels are making extensive use of the revolving door, hiring staff previously with the European Commission, European Parliament and EU Permanent Representations. The industry has been pushing the Commission to adopt a ‘technology neutral’ approach to recovery fund spending so their pet projects, like CCS and ‘blue’ fossil hydrogen, can receive public money,” charges CEO.

The question of course is whether the EU can meet its ambitious climate objectives and hydrogen targets with green hydrogen alone – or at what cost. According to Johannes Trüby, Director at Deloitte, who authored a report for industry association Hydrogen4Europe, All colours of hydrogen are needed in the transition.

“Our pathways show that hydrogen produced from renewables and low-carbon hydrogen – produced from natural gas with CCS or via pyrolysis – complement each other in establishing the hydrogen economy,” said Trüby. “The results of the study suggest that greater technology diversity helps to lower the cost of the transition and reduce the risk of missing the climate neutrality objective in 2050. On the supply side, a technology diverse pathway to climate neutrality shows potential savings of €1 trillion for society over the next 30 years.”

Trüby notes that “all technologies which contribute to lowering emissions should be given a chance to compete – including nuclear, natural gas and CCS. In fact, our study finds that the development of a fully operational CCS value chain is indispensable for the success of the energy transition as it allows, in combination with biomass, to achieve negative emissions. Moreover, enabled by CCS, low-carbon hydrogen can provide sufficiently large volumes of hydrogen early in the transition to support the development of infrastructure that enables the deployment of both low-carbon and renewable hydrogen.”

Deloitte’s assessment is confirmed by another recent report, this one from the influential Berlin-based think tank Agora Energiewende – which represents multiple stakeholders from government, NGOs, labour unions and business – and consultancy Guidehouse: Making Renewable Hydrogen Cost-Competitive.

The Agora/Guidehouse report concludes that green hydrogen will remain uncompetitive until at least the 2030s. “There is currently no natural market demand for fully decarbonised hydrogen, nor is such demand anticipated to materialise prior to the end of this decade,” the authors note. “Even at CO2 prices of €100 to 200/tonne [the current market price is around €50], the EU ETS will not sufficiently incentivise renewable hydrogen production, making additional policy support necessary for a considerable period of time,” they warn. 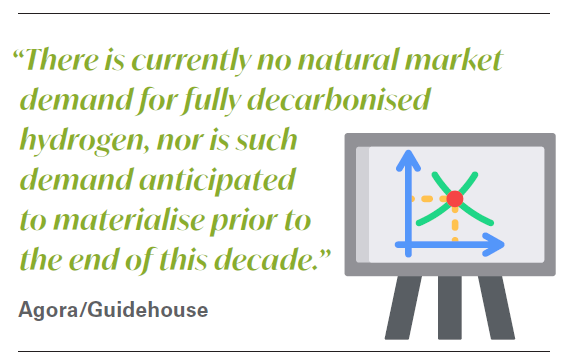 The calculations in the report are based on dedicated renewable energy plants that ensure optimal use of electrolysers. If electrolysers use grid electricity and operate based on market prices for hydrogen and electricity, things get worse: “operating costs would increase disproportionately at more than 5,000 operating hours”.

The authors give a number of recommendations for policies to stimulate the development of green hydrogen. Interestingly, they write that “among potential policy options, a general usage quota for renewable hydrogen would not be sufficiently targeted to induce adoption in the most important applications.” This implies that the measures in the EU Fit-for-55 package, in the revised Renewable Energy Directive, will not suffice to make green hydrogen happen in Europe.

Instead, they recommend that “several policy instruments should be deployed in concert to achieve this aim – namely, carbon contracts for difference in industry; a quota for aviation; auctions to support combined heat and power plants; measures to encourage markets for decarbonised materials; and hydrogen supply contracts. These instruments will also need to be complemented by regulations that ensure sustainability, appropriate infrastructure investment, system integration, and rapid renewables growth.”

Hydrogen bridge from MENA to Europe

Independent energy analyst Cyril Widdershoven puts the findings of Agora Energiewende and Guidehouse in even blunter terms in a post on LinkedIn: “The immense and costly green hydrogen plans and projects presented by European Union member countries and the UK aiming to set up a “hydrogen-economy” are not realistic at present,” he wrote. “The unavailability of space, resources and investments, combined with a lack of technically feasible infrastructure and water resources, are putting plans and strategies at risk while politicians and green hydrogen proponents are making headlines.”

To Widdershoven, who holds several advisory positions with international think tanks across the world and is also global head, strategy & risk at Berry Commodities Fund, this presents an opportunity to the gas industry. He suggests that the creation of a “hydrogen bridge” (blue and green) between Europe on the one hand and the MENA (Middle East North Africa) region on the other could kill several birds with one stone. It could help Europe reach its climate targets while it would support economic growth, diversification and emission reductions in a currently unstable neighbouring region. It would “pave a more smooth transition of hydrocarbon exporting and producing countries to a non-carbon based situation, without confronting the latter with huge financial constraints, political and economic instability or outright conflict.”

Widdershoven notes that already several hydrogen projects are being undertaken in the MENA region, both blue and green. For example, Italian oil major ENI is assessing the options of setting up blue hydrogen projects in Egypt and Algeria. Egypt has ambitious renewable energy goals (42% share in 2035) and is investing heavily in green hydrogen projects. ENI, he adds, is buying up natural gas assets in Algeria and elsewhere from rivals such as BP. Algeria of course has extensive gas pipeline connections with Europe.

A blue hydrogen bridge might also be used to develop gas resources in the Eastern Mediterranean and the Middle east. “Europe’s still growing energy needs, which are mainly related to electricity, can be met by including East Med gas into a blue hydrogen supra-regional approach,” Widdershoven suggests. “Changing East Med gas from LNG/pipeline targets to a blue hydrogen opportunity will not only be very attractive for Europe but also support ongoing energy transition and economic diversification in North Africa and East Med.”

As to the Middle East, most Gulf-based oil exporters are investing heavily in blue and green hydrogen and could become major exporters to Europe, Widdershoven notes. He suggests that linking “the appetite” of Arab governments, oil majors and sovereign wealth funds to Europe’s energy and hydrogen needs would be advantageous to all concerned. “At present most parties are still living in silos….Somebody needs to take the first step and cross the bridge.”