Hydrogen: the great energy hope, or a whole lot of hype? [GasTransitions]

It’s very likely that every Asian country will want to be as energy independent as possible. Locally produced wind and solar offers energy independence, but for many Asian countries the land mass or population density does not suit the mass deployment of solar or wind in the way we are rolling it out in Australia. Hence some hydrogen hype.

However, offshore wind, and particularly, offshore floating wind is likely to represent a very competitive threat. Right now, hypothetically, exported hydrogen would require about A$280/MWh (US$196/MWh) to earn its cost of capital as electricity in Japan. By contrast, by 2030 offshore floating wind may be around US$60/MWh – less than one-third of the hydrogen price.

It’s true that there will still be a need for firming, but again, people who don’t understand renewable energy tend to overestimate the amount of energy required for firming. Lots of power is needed for firming but the energy and hence fuel requirement is much smaller.

The following sets out salient points from some of the studies we have been looking at.

Note that hydrogen may well have an important role in process heating applications such as steel making. There is also a long history of “fuel cells” for transport. However, in the market the car companies are not betting on fuel cells the way they are on electric vehicles. I also wonder about the sense in Australia pursuing both a fuel cell transport network and an EV charging network, but perhaps that is a “game” best played out in the market. In any event, this note is concerned with electricity.

Is hydrogen the hope of those who missed the renewables/lithium take-off?

Australia and the world’s exciting rush into renewable energy has seen the cost of wind and solar fall very dramatically. What wind and solar can and can’t do is now well understood. Thoroughly and appropriately integrating these technologies into today’s electricity grids presents plenty of work for system planners and developers.

In the car industry, electric vehicles, despite starting many years behind fuel cells, are dominating the race to non-fossil fuel light transport. The Tesla story is well known, but major global manufacturers like VW have bet the company’s future on lithium and others like Hyundai and Ford are putting very significant capital into electric cars.

But there are many, many losers. Indeed in stock markets, historically, it’s been way easier to find losers than winners. That is changing now as some winners – Tesla, NextEra and Orsted – become more obvious. Still, the losers represent a big piece of global capital. If they can’t be winners in wind, solar or lithium, what can they do?

Perhaps the answer is to get behind another new technology where the winners and even the future of technology are yet to be determined?

And that technology is hydrogen. One might think that Australia has enough to do with wind and solar and lithium and that the federal government could get behind Australia’s fantastic position in these industries. But no, that work is left to the states, while the federal government enthusiastically backs coal, gas, and as a sideline out-of-the-picture technologies like nuclear and carbon capture. And also hydrogen.

One of the most insightful presentations ITK has seen this year came from an ANU (Australian National University) paper (lead Cheng Cheng) presented at the ANU 100% renewables conference in March 2020. This paper looked at 100% renewable energy in Japan.

Three slides copied from that presentation are: 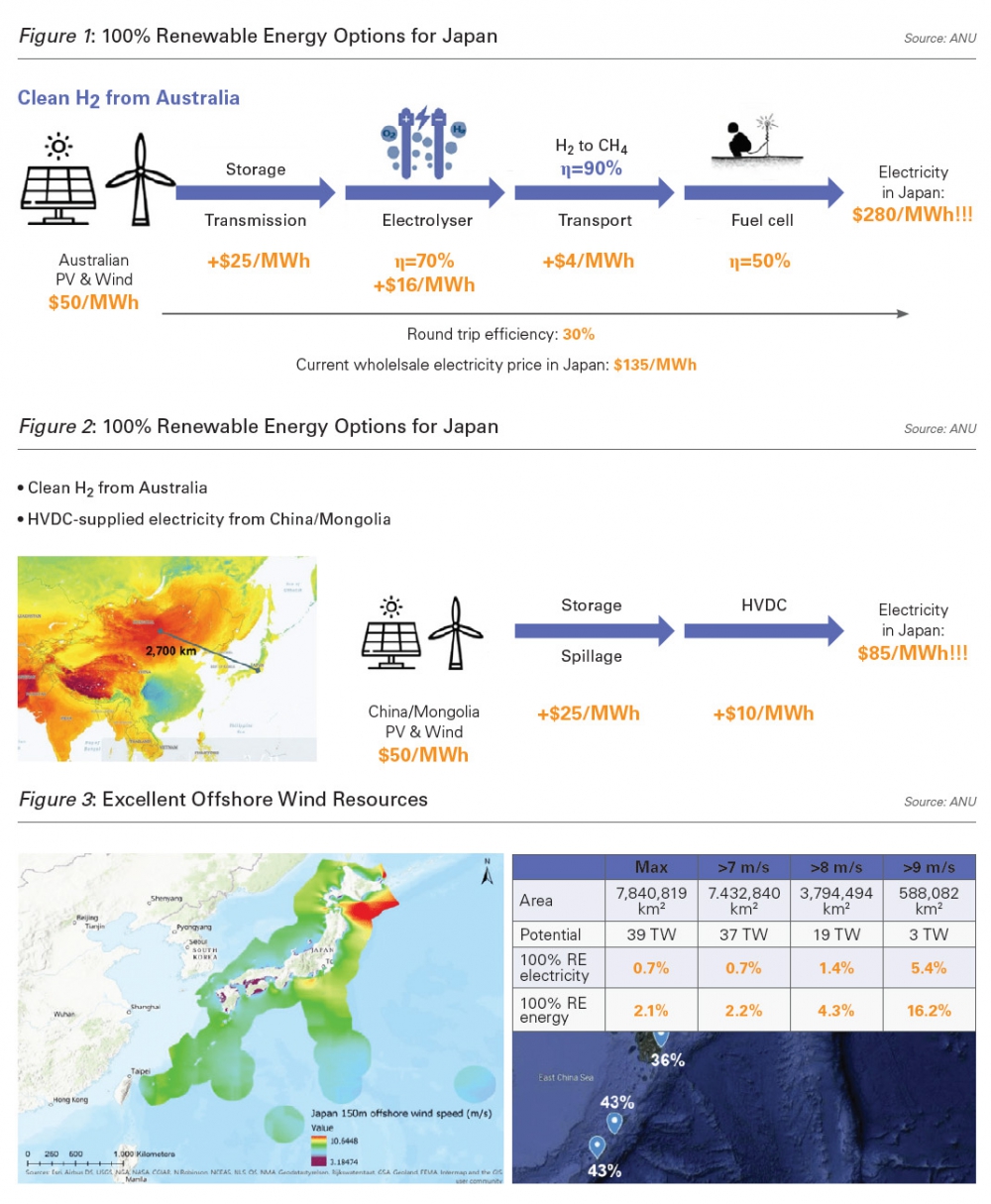 The key point is that there is close to 100,000GW of offshore wind potential. Japan’s electricity consumption is pretty close to 1 PWh (1,000 TWh) and assuming a capacity factor of 40% would require about 300 GW of wind to serve 100%. So if the cost was right there would clearly be lots of potential for offshore wind in Japan.

However, the fly in the ointment is the water depth, 150 metres. This requires floating offshore wind, a technology still very much in its infancy.

One of the first places ITK goes for global cost information is the National Renewable Energy Laboratory (NREL) in the US. Sure enough, they have a recent study on offshore floating wind costs, even if for Maine, USA. 90% of Maine’s offshore wind is >9 m/s. The study’s authors report that at the end of 2018 there were only seven offshore floating wind projects in the world totaling just 44 MW with another 203 MW under construction. Commercial-scale offshore wind is expected around 2025. 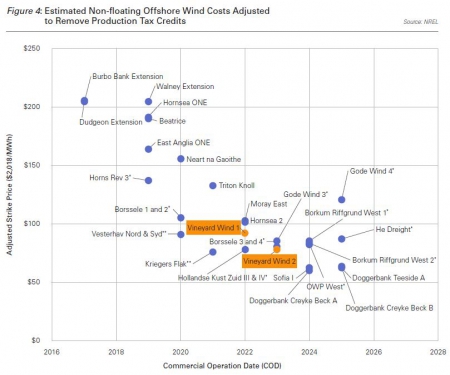 We see a price of around US$75/MWh from this chart, maybe US$ 70/MWh for sites with first production in 2024 or later.

Floating offshore has different costs for substructure and foundation and for dynamic array cables, and different installation and maintenance. Turbine development and project management, grid connection, capacity factor and operations are identical to fixed offshore wind. ITK believes the cost of capital will be higher for the first few projects but once these have been proved up, particularly under severe weather conditions, the weighted average cost of capital (WACC) should drop to the same level as fixed offshore.

Increasing turbine size will help to lower costs by increasing energy output. Looking at the following figure it’s probably best to focus on the 7-10 (m/s) section and not the very high wind speed best case. Even so, over 10 years power output can probably double but turbine costs per MW of rated capacity decline by 1/3. 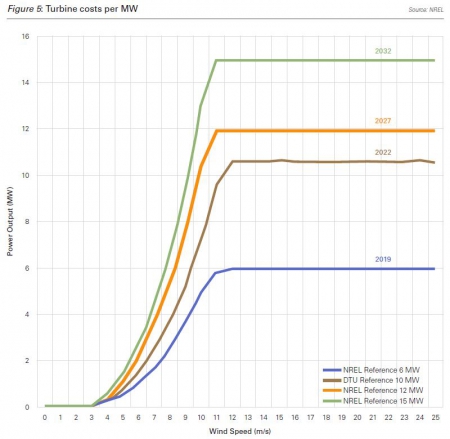 Plugging these numbers into a “Levelised cost of energy [LCOE]” model NREL finds that by 2032 offshore floating wind in Maine can be US$57/MWh.

Perhaps it should be hydra gen rather than hydrogen?

Globally one of the main pushers of hydrogen is the “Hydrogen Council”. The Hydrogen Council originated at Davos and has the laudable aim of promoting hydrogen.

Recently it commissioned McKinsey to do a major report, released in late January 2020,  on the outlook for hydrogen costs. The Hydrogen Council steering group for that report looks as follows:

What I see in that list is a group of global car companies, and oil companies with a Japan and perhaps China cluster. What Boeing is doing there is not obvious but I guess it’s a pleasant distraction from worrying about other issues. 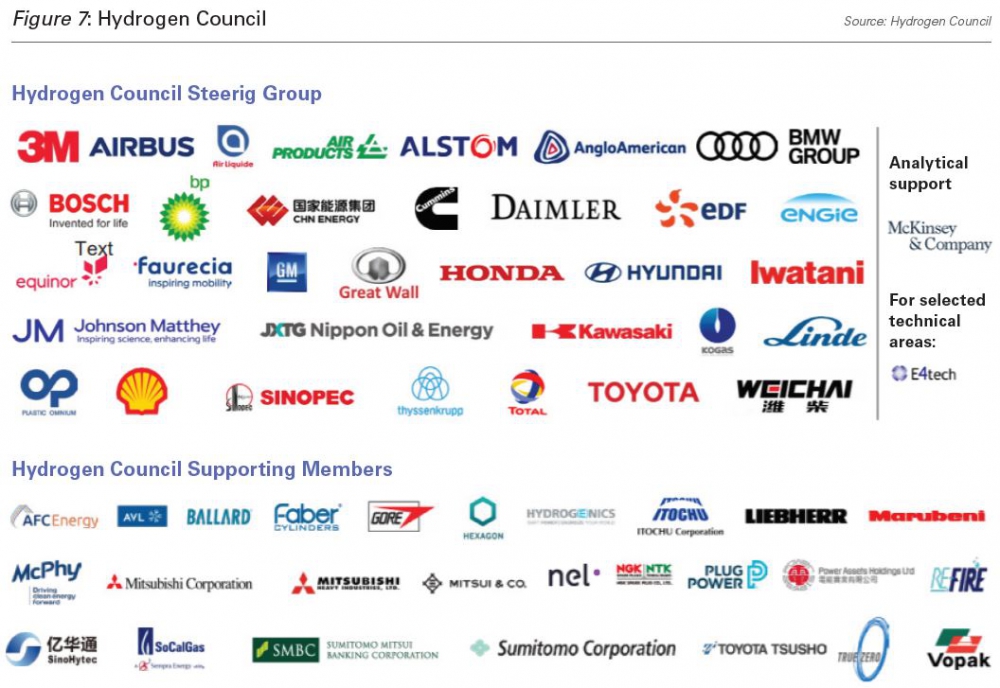 Roses are red but hydrogen is green, not blue

There are some successful CCS projects, in the sense that the carbon is captured, stored, and does not leak, but in general it’s been hard work. The famous Gorgon plant offshore in West Australia started up a decade late. The Global CCS Institute in Australia has been working on an Otway Basin project for years. 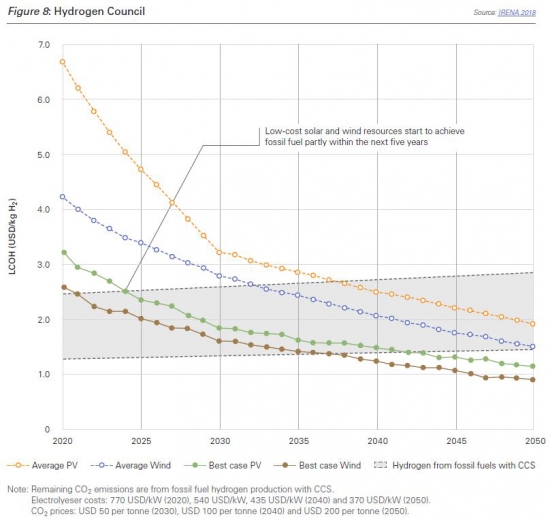 There is an increasingly large number of cost estimates for hydrogen production from sources such as McKinsey for the Hydrogen Council and by various hydrogen groups in Australia and Europe. IRENA produced one graph which gives a reasonable indication. However, their estimate of “blue” hydrogen production cost is likely conservative as it sees no cost reduction from scaling up.

Prices in $/KG are hard to translate but broadly it takes 8 kg of hydrogen to have the same energy content as 1 GJ of gas. So even a price of US$1/kg corresponds to about US$8/GJ of gas, and then there is the transport cost.

Hydrogen transport losses likely to be over 40%

IRENA noted that hydrogen shipping can be done in at least three ways, via ammonia with energy losses of 45% (hydrogen compression 19%, electrolysers 16%, power converter efficiency 10%); via methyl cyclohexane (whatever that is) losses of around 43% and via liquefaction (same as LNG) with losses of 20%-45%.

So for IRENA – and IRENA may be quite conservative – the 2050 delivered cost of hydrogen at a port in Japan is around $US2/kg or $US16/GJ. It’s hard to see that as providing a competitive future for Japan’s electricity sector. 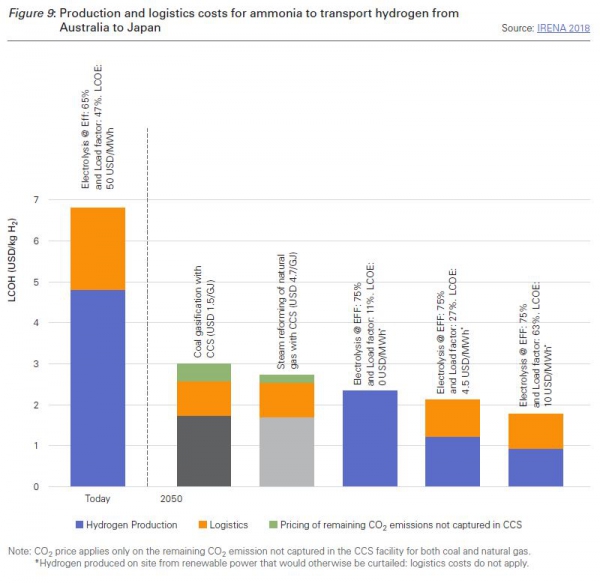