China – now the largest LNG buyer after overtaking Japan this year – will continue to require significant volumes going forward as it leans on gas to fuel an energy transition away from coal. But just how much LNG the Chinese gas market can absorb in the coming decades will determine to a large extent how many export projects get sanctioned in the next few years.

China is the fastest-growing major gas market in the world, with domestic gas demand driven by urbanisation, industrialisation and low carbon-clean air policies that are incentivising coal-to-gas switching in polluting industries. Consumption is expected to grow from 370bn m³ this year to 600bn m³ by the end of this decade on the back of government policies that aim to lift gas to 15% of the energy mix by 2030, from around 8% last year.

Experts say this implies annual demand growth of 8% through to 2025, which will then slow to 5% in 2025-2030. Domestic gas production on the other hand – which accounts for 55% of China’s total gas supply – is unlikely to match this.

State oil and gas giants PetroChina, Sinopec and CNOOC are expected to expand local gas production by around 7% annually over the 14th Five Year Plan period from 2021-2025 based on long-term production growth targets provided by the three NOCs, which is insufficient to meet demand growth. Furthermore, beyond 2025, output growth is seen slowing to just 4% annually as production in the main basins of Ordos, Sichuan and Xinjiang reach maturity.

Given that demand will continue to outpace domestic production growth, China’s gas imports via pipelines and seaborne LNG shipments will need to continue to grow to meet expanding gas needs.

How much LNG does China need?

How much LNG China needs in the long run, though, mainly depends on a combination of three factors: demand growth, domestic gas supply growth, and the development of pipeline gas projects. China’s LNG inflows of 64.5mn metric tons in the first 10 months were not far off the 67.1mn mt imported for all of 2020 and put this year’s volumes on course to top 80mn mt, which would be equivalent to one-fifth of estimated global demand.

China will continue to expand LNG imports over the next decade at least, which will require contracting additional LNG volumes. Chinese importers currently have around 61mn mt/yr of long-term contracts active, which rises to a peak of 78mn mt/yr by 2025, according to company announcements, media reports and proprietary data compiled by NGW. This is less than this year’s expected imports of 80mn mt.

On top of this, other major suppliers include Qatar, Indonesia, Malaysia as well as from portfolio players like Shell, BP and Total. Some Chinese independents – spearheaded by ENN Group, which signed a 13-year deal for 0.9mn mt/yr with Cheniere in October – have increased LNG imports too, bypassing the Chinese oil majors.

In the next few years, additional contracted volumes will come from the US and Russia. In the US, these extra supplies will come from new capacity belonging to Cheniere, and the Calcasieu Pass and Plaquemines projects under development by Venture Global LNG.

LNG has benefited the most from the rapid expansion in China’s gas demand over the past 15 years, but more moderate demand is expected going forward. The view among researchers at the Development Research Center, a think tank under China’s State Council, is that LNG demand growth is set to slow to 3% CAGR over the coming decade to reach a total of 103mn mt/yr by 2030.

Given CNPC’s expectations that China's long-term contracted volumes will peak at 78mn mt/yr by 2025 and then inch down to 75mn mt/yr by the end of this decade, this implies an additional 25-28mn mt/yr is still to be contracted.

US LNG back in

All in all, 75mn mt/yr of new global LNG supply capacity is needed before 2030 to meet future demand, which suggests 15-20mn mt/yr needs to be sanctioned every year for the next four to five years, for start-up before the end of this decade, according to analysts at Bernstein Research.

China will account for about 40% of the incremental demand, which will be split mainly between the US and Qatar. Sinopec’s recent blockbuster LNG contracts with Venture Global, along with a raft of smaller deals between Cheniere and second-tier players, are a strong hint that Chinese importers have been given the nod from Beijing to buy from the US.

China has already emerged this year as the second-largest recipient of US cargoes just behind South Korea, while the US has climbed to become the third-largest supplier to China after Australia and Qatar. This is a far cry from 2018-2019, when LNG trade between the two countries plunged to zero amid acrimony between the former Trump administration and Beijing. 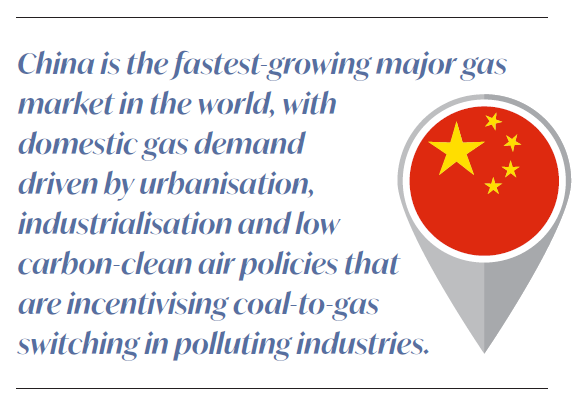 “Our clients have gradually realised that US long-term contracts are more stable in terms of pricing,” Maggie Jia, Cheniere’s chief China officer, said at an online energy conference in China at the start of December.

Jia said Chinese buyers had come to appreciate the transparency of Henry Hub pricing, as it is based on visible supply-demand fundamentals in the US – unlike crude oil prices, which can be influenced by geopolitics.

The projections for a marked slowdown in China’s LNG import growth over the coming decade are contingent on the fourth trunk line of the Central Asia-China gas pipeline – known as Line D – starting up by 2025, which is uncertain.

Geopolitics and costs have complicated pipeline gas imports, although the sense among CNPC researchers is that pipeline imports are on track to double by 2030. Despite plentiful gas resources in Central Asia and Russia, growth in pipeline gas exports to China has so far underwhelmed compared with LNG.

Gazprom has ramped up transmission along the 38bn m³/yr Power of Siberia pipeline to China in the second half of this year, which will contribute to more sustained growth in China’s pipeline imports going forward. Line D and a second pipeline by Gazprom from West Siberia remain under discussion – the speculation among industry insiders in Beijing is that Line D has a better chance of moving ahead than a second pipeline from Russia, but this is no guarantee.

The absence of a new pipeline would present considerable upside for LNG imports as it would open up a supply gap of up to 30bn m³/yr that would need to be balanced by even more LNG. The present base scenario is that China has 25-28mn mt/yr of uncontracted LNG demand up to 2030, but the lack of a new pipeline would see this swell by another 20-25mn mt/yr – raising potential total LNG import demand to a massive 120-125mn mt/yr in the second half of this decade, or double China’s current imports.

If China delays contracting more LNG volumes, then the country may face higher gas volume and price volatility as well as risks to achieving its national targets for gas to supply 15% of the energy mix.

On the other hand, there is downside risk for LNG imports too. If China can grow domestic gas production more quickly – not impossible given the government’s focus on accelerating domestic exploration and production – this could add 15-20bn m³/yr of supply that would shrink the need for more imported volumes. LNG imports could plateau at 90mn mt/yr if domestic production rises more than expected.

Some projects set for disappointment

The multiple uncertainties over China’s long-term LNG demand mean some contenders among the record number of export projects vying for a final investment decision (FID) will miss out.

The pace of sanctioning has already picked up markedly from last year’s solitary FID, after Qatar Petroleum approved the four-train North Field East (NFE) project and Woodside and BHP Group gave the green light to the 8mn mt/yr Scarborough development.

These FIDs leave less room for other projects to go ahead, as otherwise the market may face the risk of another period of oversupply. The most probable FID coming up is the fourth train expansion being pursued by Freeport LNG – which delayed approval from this year to mid-2022 due to costs and LNG contracting – and Venture Global’s Plaquemines LNG. But Qatar is also preparing tenders for NFE’s fifth and sixth trains, and may look to steal in.

Trailing this leading pack are other US projects such as NextDecade’s Rio Grande LNG and Tellurian’s Driftwood LNG. The two facilities have a combined capacity of 45.2mn mt/yr, but have had FIDs postponed multiple times and do not seem likely to be approved before 2024 – by which time they could be pre-empted by rival developments in Papua New Guinea and East Africa.

While economics and project development are key drivers for US LNG exports to China, another important factor is US-China trade policies. Under the phase one agreement of the US-China trade deal signed in January 2020, China needs to increase its imports of US goods and services to $387.5bn by the end of this year to reach the specified target.

This is effectively a doubling of existing procurement and will not be easy for China. Energy-related purchases are on track to reach $30bn of the $50bn stipulated under the phase one agreement, and additional LNG deals could help close the gap further.