How Africa maximises its oil and gas riches [GGP]

The energy crisis has underlined the global economy’s dependence on fossil fuels, and the call for more oil and gas supply has gone out. Africa stands ready to deliver. Last week at Africa Oil Week in Cape Town, Mansur Mohammed, Head of West Africa Upstream Content, and I scoped out the opportunity and the challenges for Africa’s upstream industry.

First, Africa has huge undeveloped resource, and no doubt more yet-to-find volumes. In the decade to 2020, 61 billion boe of conventional resource was discovered in Africa, almost twice as much as any other upstream region. Natural gas accounted for the bulk of these resources, much of it yet to be commercialised.

Exploration success has continued big time into the new decade with major deep water oil discoveries. Baleine (Eni) in 2021 is Côte d’Ivoire’s biggest ever and is already under development; Venus (TotalEnergies) and Graff (Shell), both this year, open up a new play entirely in Namibia. These three giant discoveries hold the type of low cost, low carbon-intensive barrels that the world needs.

Namibia could prove to be very extensive indeed. WoodMac’s current estimate for total reserves is 6 billion barrels; but the upside could be more than twice that dependent on future appraisal. TotalEnergies’ second well on Venus is planned for next year.

Second, upstream investment in Africa is on a strong upward trend. These big new discoveries feed into a healthy existing development pipeline which could drive a doubling of spend by 2025 from the regional lows of two years ago. With global spend showing little sign of growth, Africa is outperforming other upstream regions.

Moreover, investment is no longer dominated by Nigeria, Angola and the Congo. Much of the future spend will be in Uganda, South Africa, Senegal, Cote d’Ivoire, Mozambique and in all likelihood Namibia.

Almost half of projected spend beyond 2025 is slated for pre-FID projects. Uncommitted investment cannot be taken for granted. Allocation of capital is as ever vulnerable to the vicissitudes of commodity markets; while IOCs are sticking rigidly to tight capital discipline so far in this upcycle, preferring to return surplus cash to shareholders rather than invest in growth.

Above all, investors want to maximise the value of projects. A big part of that is process: minimising the lapse of time from discovery to first production and cash flow generation.

Third, governments have every motivation to expedite process. It’s not just the investment that can flow their way but the governments’ share of revenues. Upstream fiscal revenues in 2022 into the coffers of African producing nations will reach the highest level for a decade. Governments should be aiming to sustain and grow that income. 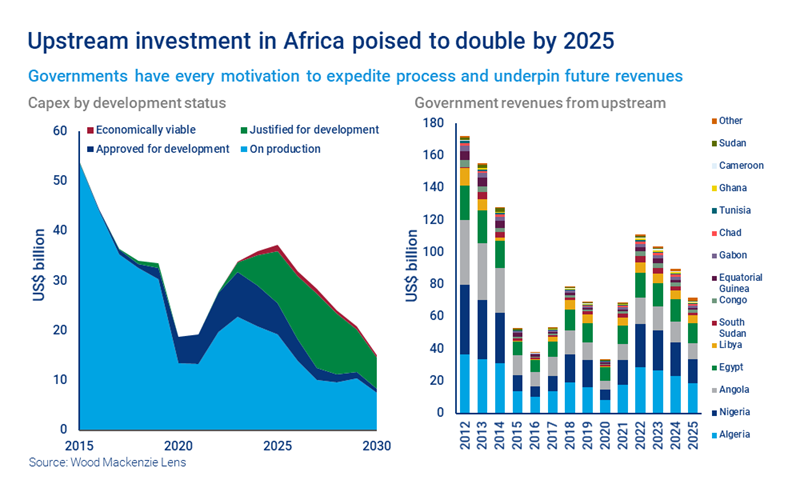 That’s about minimising bureaucracy to speed the process of permitting, licences and approvals; ensuring the supply chain and service industry are fit for purpose; building investor confidence through transparency, reputation and good governance; and incentivising investors with fiscal stability and clarity of terms.

Fourth, the corporate landscape in Africa is changing. The Majors continue to focus their global portfolios around advantaged assets – low cost, low carbon assets typically early in their life cycle - and selling mature, higher cost assets including legacy positions in Africa. This is a structural shift that’s been happening for a decade and will be ongoing. The good news is that there are buyers, mainly independents and indigenous players.

The ‘changing of the guard’ needn’t be seen as a bad thing - we’d argue that it’s better that the opportunities are in the hands of those that want to make the most of them. The resurgence in upstream investment suggests it isn’t holding Africa back.

Last, how do the bullish prospects for Africa’s upstream growth sit with net zero goals? The question is timely with COP27 taking place in a fortnight’s time on the continent at Sharm El-Sheikh in Egypt. We expect African countries, which together are responsible for just 4% of global annual emissions, will be adamant that their priorities are to develop fossil fuel resources to drive economic prosperity and bring affordable energy access to over 500 million people currently without electricity.

There is surely a win-win outcome. IOCs and other providers of finance can help develop Africa’s oil and gas resources, though most will only invest in projects that are aligned with their own net zero targets. That helps Africa to deliver the low cost, lower carbon oil and gas the world wants. Nor should projects be just about exports – developing domestic gas and power markets has to be part of national strategies and those of IOCs.

The longer-term future is all about low carbon energy. Many African countries have enormous solar and wind resource, some have plentiful hydro potential and nature-based solutions such as forests and soil farming too. There’s an opportunity for Africa to build a low carbon future around renewables, hydrogen, geothermal and CCUS, in parallel with the decarbonisation of fossil fuel developments.

Winter could soon rear its ugly head, pushing prices up despite healthy storage