The Haynesville shale may be overshadowed by the Appalachian and Permian basins, but a recently announced midstream deal in the play illustrates that hopes for it remain high. DTE Midstream, a unit of DTE Energy, said on October 18 that it had agreed to buy Haynesville assets from Momentum Midstream and Indigo Natural Resources. DTE will pay $2.25bn in cash for the system of gathering lines and pipelines.

Included in the acquisition are an existing gathering system with 1.2bn ft³/day capacity – which can be expanded to 2bn ft³/day – and a 150-mile, 36-in a gathering pipeline that is due to enter service in the second half of 2020. DTE will pay an additional $400mn milestone payment upon its completion.

Commenting on the transactions, DTE Energy’s president and CEO, Jerry Norcia, described the Haynesville as “one of the fastest-growing and best-positioned US shale formations”. He added that DTE believed the assets had “excellent access to large markets”, and were still in the early- to mid-cycle phase of their development.

The transaction, which is due to close later this quarter, marks DTE’s entry into a new market. It illustrates expectations that Haynesville production will continue to grow, despite persistently low commodity prices and a US-wide slowdown in the pace of shale drilling.

Such expectations are backed up by the rise in demand for feedstock gas for new LNG facilities on the US Gulf Coast – with more capacity coming online over the next few months and years. The four LNG export terminals that have entered service on the Gulf Coast in the last few years are all set to bring new trains online between now and 2021. Meanwhile, additional facilities that are part of the second wave of US LNG construction are under development, boosting future demand expectations. This demand growth is a boon to the Haynesville, but producers in the play will compete with those in the Permian Basin – which has become the second largest source of shale gas supply in the US after the Appalachian Basin. However, in the Permian, gas is a by-product of drilling for oil, whereas in the Haynesville, drillers are targeting gas. 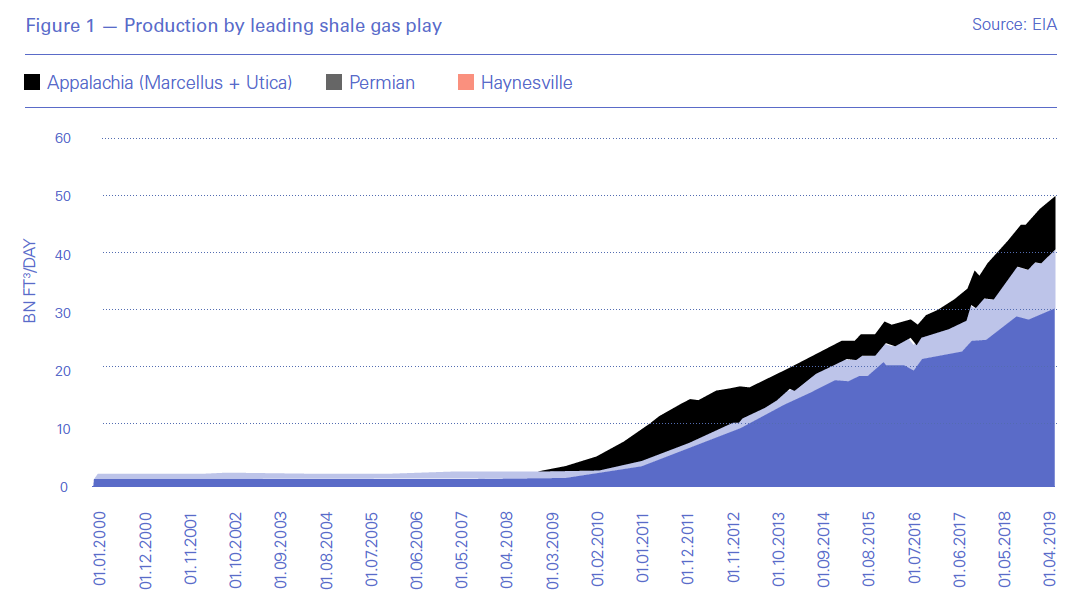 “Haynesville has a lot going for it – good rock, lots of pipeline capacity, in addition having the good fortune of being located very close to the largest sector of demand growth – LNG exports from the Gulf Coast,” IHS Markit’s senior director for North American natural gas, Charles Nevle, told NGW. “The challenge is that Haynesville is dry gas and must compete with the essentially ‘free’ gas from the associated gas plays as well as with gas pushing down from the north from the Marcellus and Utica. LNG export growth certainly provides a support mechanism for gas prices helping to counteract the downward price pressure exerted by the growth in associated gas.”

According to IHS Markit, the US is approaching 7bn ft³/day of LNG exports, and the analyst expects this to average nearly 10 bn ft³/day by 2022. “Given the growing incursion of associated gas, without the growth in LNG exports US gas prices would be much lower and the environment for dry gas production, including Haynesville, would be much worse,” Nevle noted.

Considerably lower natural gas prices is a worrying proposition for an industry that is already struggling with price trends. Henry Hub spot prices rose above $4/mn British thermal units (Btu) at the end of 2018, but have averaged $2.6/mn Btu over the first nine months of 2019 according to data from the US Energy Information Administration (EIA).

US gas producers have been cautious and some have scaled back activity in response to the lower price environment. The overall gas-focused rig count in the country has fallen to 133 in the week up to October 25, according to oilfield services firm Baker Hughes. This marks a decline from 193 active gas rigs in late October 2018. The Haynesville, however, has fared well compared with other shale gas plays. Baker Hughes data show that there were 51 gas rigs drilling in the Haynesville at the end of October – with that number unchanged from a year ago. It is also the largest number of gas-focused rigs currently drilling in any shale basin. By contrast, gas rig counts have fallen in prolific regions such as the Appalachian Basin’s Marcellus and Utica shale plays – down to 42 and 11 respectively.

Nonetheless, despite doing better than other shale regions in terms of activity, the Haynesville could be facing some difficult times. “The inventory of existing, low break-even wells is critically low, and the second-tier assets will not be economic at the prices IHS Markit expects in the coming few years,” Nevle said. “Many of these operators are private and will be able to turn down activity, helping mitigate the pain.”

Shale drillers – oil and gas alike – have continually defied expectations, and while activity slowed down during the worst of the commodity price slump it has since picked up and broken new records but looks set to lose momentum now. This applies to the Haynesville too, with the play rebounding from a slowdown in 2012-13 and undergoing a resurgence in the last year or so before facing more turbulent times recently.

“Production from the Haynesville now exceeds the previous peak in 2011, and of course much has changed since that time with massive volumes of gas now moving into the region from Appalachia as well as gas pushing over from the [US Midcontinent] region,” Nevle said. “Although we don’t foresee significant production growth from the Haynesville owing primarily to competition with associated gas and more economic Appalachian gas, in addition to best resource constraints in the play, if Haynesville were to grow significantly beyond current production levels new gathering and takeaway infrastructure would almost certainly be necessary.

However, Nevle noted that if US oil production levels are lower than expected, this would lead to lower associated gas output volumes. In turn, this could result in a higher gas price and thus a stronger incentive to grow Haynesville production.

“The US gas market growth potential right now is like a see-saw,” Nevle said. “On one side is associated gas, primarily form the Permian, and the other is dry gas, primarily from Appalachia and Haynesville. If oil-directed drilling growth, driven in large measure by the global supply-demand balance for crude, stays strong, then gas prices, and dry gas-directed drilling is negatively impacted and vice-versa.”

Meanwhile, LNG exports are expected to remain the primary driver on the demand side. The Haynesville is well-positioned to meet that demand, but remains vulnerable to price trends.

"Let's not vilify any form of energy": Tellurian CEO