I’ve written previously on what I see as the key issues regarding green versus blue hydrogen. As most readers know, the green label is applied to hydrogen produced by electrolysis of water using renewable energy, while blue is applied to hydrogen produced by steam reforming of hydrocarbons with integrated carbon capture and storage (CCS) . My position has been that if hydrogen is to play a major role in a decarbonised energy economy, it will initially have to be blue hydrogen. Production of green hydrogen is vastly more energy intensive, and the energy used to produce it must be zero-carbon. Green hydrogen production can’t realistically be scaled until our energy economy has already been successfully decarbonized by other means. Blue hydrogen is the logical candidate for the “other means”. It can be used in building out the distribution, storage, and power generation infrastructure that green hydrogen will require, once a transition to green hydrogen becomes feasible. 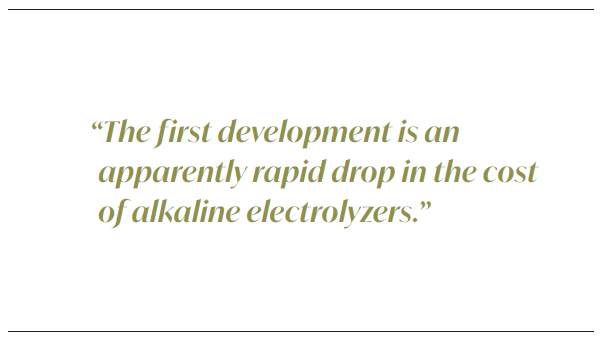 That remains my position. We can’t afford the sharp increase in land use, resource extraction, and total energy consumption that a commitment to green hydrogen would necessarily entail. And we especially can’t afford the sharp increase in carbon emissions that a premature commitment would entail. A premature transition would be great for parties whose real interest in green hydrogen is corporate growth and profits, but it would be bad for climate change and the environment.

Two recent developments in water electrolysis, however, force me to temper my position. They do not immediately change anything, but they have implications for the future. It may become feasible to start the transition to green hydrogen sooner than I had expected.

The first development is an apparently rapid drop in the cost of alkaline electrolyzers. PV Magazine covered Solar Power International’s recent RE+ conference in Las Vegas earlier this year. Their reporter at the conference interviewed representatives of the Chinese company Longi. According to his report, Longi – already the largest manufacturer of solar panels – is now aiming to become the largest manufacturer of electrolyzers for green hydrogen. They recently launched three electrolyzer models. The largest and most efficient is the 5 MW LHy-A1000 alkaline electrolyzer (see figure 1). It produces approximately 90 kg of hydrogen/hour, for ~55 kWh/kg of H2. Asked about cost, the representatives at the show said that it would be “below $500 per kW”. They declined to be more specific. However, in another report, Bloomberg NEF states that Chinese alkaline electrolysis systems now cost “about $343/kWh.” That’s less than a third of the $1,200 that Bloomberg cites as the cost per kilowatt in the West. 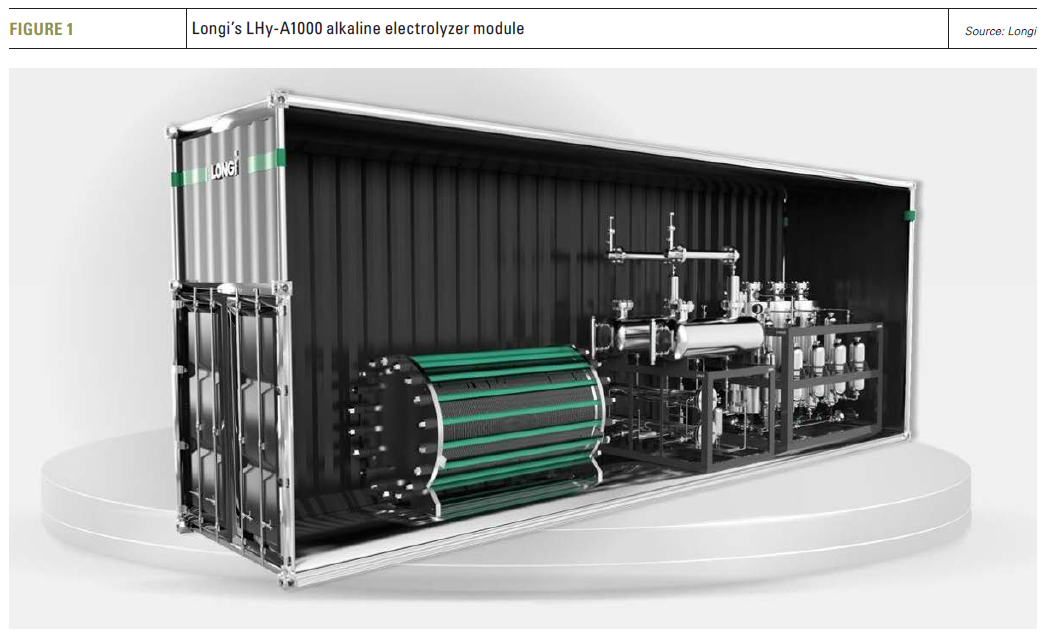 Of course, there’s a lot more to a large-scale electrolysis plant than the electrolyzer modules themselves. Alkaline electrolyzers take up a lot of plant floor space. They need cooling systems for waste heat management, external compressors to boost the pressure of hydrogen output, deionizers to condition feedwater, and more. Also, their electrodes are subject to corrosion, and different models of electrolyzers can vary widely in operation and maintenance costs. In some cases, units may need to be disassembled and their electrodes refurbished every couple of years. Without knowing details of O&M and balance of system costs, the price of the modules alone does not mean much.

What’s clear is that Chinese manufacturers are taking the green hydrogen market seriously. They will be driving to lower the cost of electrolysis just as they did with solar PV cells and panels. I’d be surprised if the capex for a complete electrolysis plant, outside of China perhaps, can be driven below $1000/kW any time soon. But surprises happen. The pricing trend for electrolysis capacity clearly is downward. That makes it only a matter of time before green hydrogen will become competitive with gasoline and diesel.

The second development is the work reported in this research article on catalyzation of the oxygen evolution revolution in electrolysis cells. A summary of the work was published on the SciTechDaily web site under the title Oxygen Evolution Reaction Breakthrough for Efficient Hydrogen Generation. I don’t know if the “breakthrough” label is truly warranted; it may be premature. The researchers themselves stress that the catalyst they investigated was not a commercial product and would not be suitable for commercial deployment. It was a lab sample that was difficult to fabricate and degraded quickly upon use.  But the work was significant nonetheless. It provided new insight into catalysis of the oxygen evolution reaction (OER). That’s important, because the OER has always been the bane of efficiency in water electrolysis. Its converse, the oxygen reduction reaction (ORR) has been a similar thorn in the side for fuel cell efficiency. 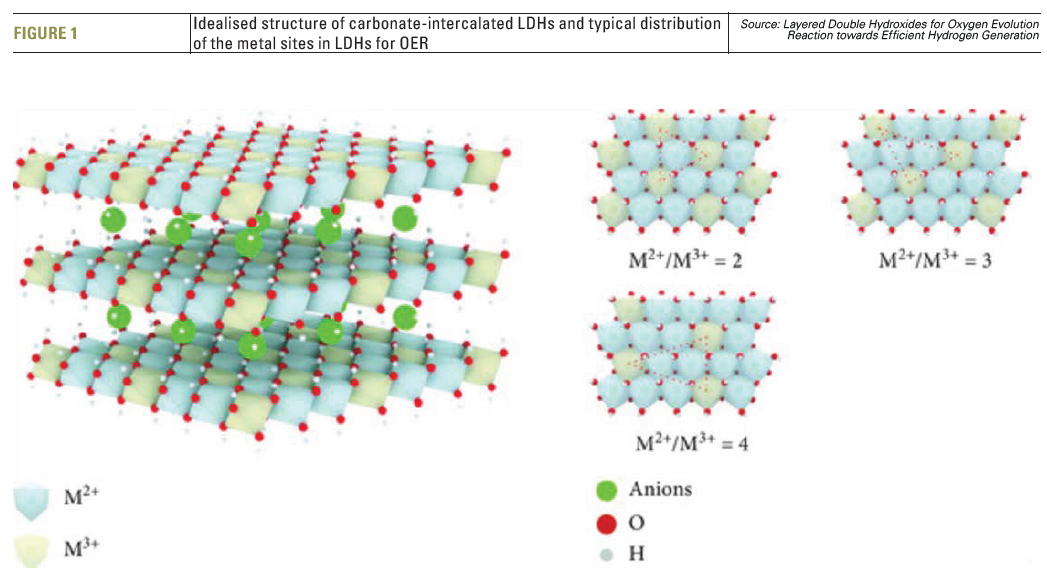 Over the years, a lot of funding has been put into the hunt for better catalysts for electrolyzers and fuel cells. Most of that hunt, however, has been aimed at finding catalysts that work as well as platinum (or platinum group metals) but use metals that are less precious. The goal is cost reduction with no loss of performance. This new work is the first (to my knowledge) that hints at the feasibility of catalysts that could significantly outperform platinum group metals for catalysis of the OER. The material the researchers tested was clearly able to reduce the overpotential needed to drive the OER at practical rates. That translates to higher electrochemical efficiency for water electrolysis cells. The same or similar catalysts would likely improve the efficiency of hydrogen fuel cells as well.

The source of the exceptional catalytic performance of the test material and the reason it would be challenging to commercialise are the same. The test material’s active surface comprised stacked layers of different 2-D lattice materials (similar to graphene) that had to be built up layer by layer. The researchers most likely used precisely controlled atomic vapour deposition methods borrowed from the semiconductor industry. Different metal atoms were embedded in the stacked 2-D lattices at regular points. Quantum interactions between the metal atoms in adjacent layers created a surface electrical environment that was unusually favourable for the four-electron OER.

That’s gobbledegook to most of us. The point though is that the research is tied to an ongoing nanotech revolution, and that it opens up whole new vistas in catalytic chemistry. It’s certain to be quickly followed up and expanded upon.

It is speculation to say how fast the total systems cost of electrolysis capacity will come down, or what the actual efficiency improvement from new electrolysis and fuel cell catalysts might be. But we can posit credible targets and ask what the implications of achieving those would be.

As a forecasting exercise, I’ll posit an all-up systems cost for electrolysis of $500/kW in five years’ time (versus ~$2,000 today), with a net AC to AC round-trip efficiency for energy storage in hydrogen of 60% (versus 40% today). Those, I believe, are conservative numbers that stand a good chance of being achieved. What do they imply for the future of green hydrogen?

To begin with, they do not relieve electrolytic hydrogen production of the requirement to run only when there is a surplus of zero-carbon electricity available on the grid, if the hydrogen is to qualify as truly green. The higher net round trip efficiency (60% versus 40%) certainly reduces the carbon penalty for operating when marginal load is being served by unmitigated fossil-fueled backing generators. It reduces conversion losses from 1.5 kWh wasted per kWh delivered from storage to 0.67 kWh wasted/kWh delivered. However, the carbon footprint for generating 1.67 kWh from backing generation in order to later deliver 1.0 kWh from storage is still greater than if the 1.0 kWh were simply delivered from unmitigated backing generation.

What the improvements do accomplish is to create a more favourable investment climate for new clean energy projects. Every kWh that the green hydrogen facility consumes yields 50% more hydrogen from a plant that costs a quarter as much. That means the operation can contract for surplus clean electricity from suppliers at a low but still positive price. The plant no longer depends on zero or negative wholesale electricity auction prices for feasibility. The price that green hydrogen plants can afford to pay for electricity sets a floor on the price of electricity that suppliers can count on. That renders new investment in what would otherwise look like an oversupplied market much more attractive. The spectre of forced curtailments is banished.

What would this mean for investment in blue hydrogen production? I don’t think it would mean much in most cases. However, that would depend on regional circumstances and hedging policies. Where natural gas and/or coal are available at low cost, and where reasonable means to sequester captured CO2 are available, blue hydrogen will be substantially cheaper than green for a long time to come. But in regions where natural gas must be imported by LNG tankers at high cost, and there is no political will to develop blue hydrogen production from coal, green hydrogen production will be attractive. But the requirement that it be produced only from surplus renewable energy is a problem.