Green hydrogen: Europe is still pretty much on its own [GasTransitions]

The report, called Great Expectations, written by Yong-Liang Por, provides an inventory of all the new hydrogen projects going on in the world and their current status, as well as of national hydrogen policies.

It draws two major conclusions. One, the projects fall far short of the targets, particularly given the likelihood that many will be delayed or not built at all. Two, Europe is far ahead of the rest of the world when it comes to green hydrogen ambitions, with Australia, South Korea and the Middle East following behind. China and the U.S. have no green hydrogen policies and Japan only to a very limited extent.

Under the EU plan, hydrogen is to cover 24% of total energy demand by 2050. South Korea has a target of 20%, China 10%. Heavy transport is expected to constitute the largest proportion of demand, both in South Korea and the EU, followed by heating for buildings. (Figure 1) 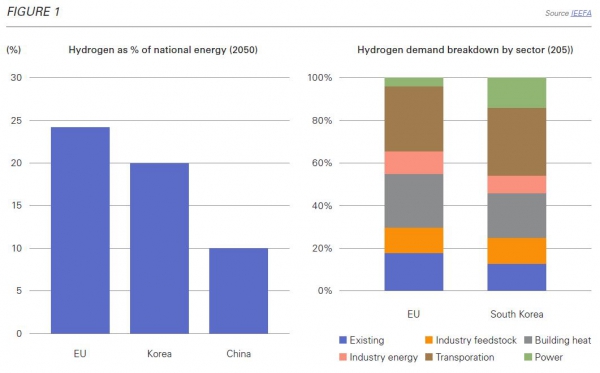 The EU plan, however, is the only one with a strong focus on green hydrogen. IEEFA notes that:

The EU is also the only region in the world that views green hydrogen in terms of a major industrial policy aiming to “ensure a future” for a broad range of European industrial manufacturers, with investment going into renewable power generation, electrolysers, storage, pipelines, fuel cell vehicles and buildings (Table 1). 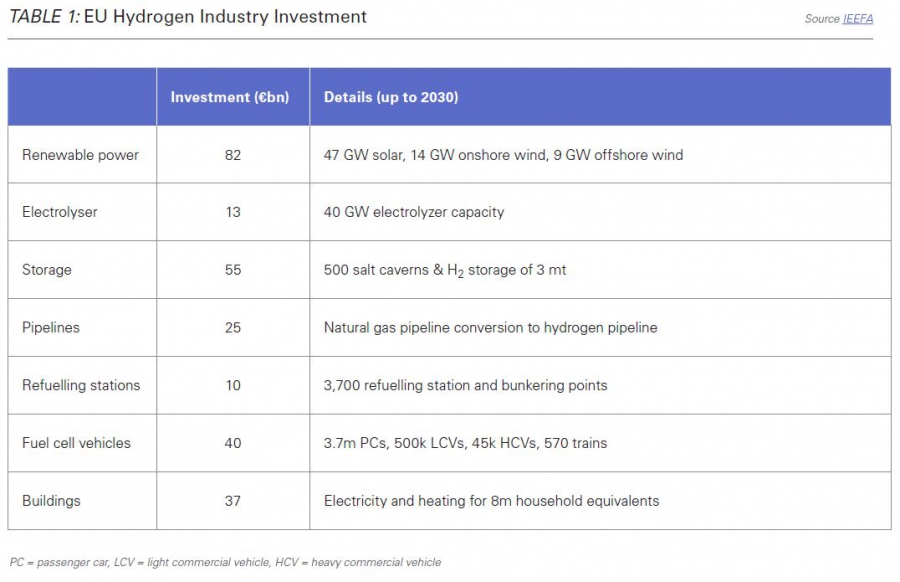 The buildout of the new hydrogen economy in Europe will require a significant expansion of industrial capability, notes IEEFA:

IEEFA managed to compile a database of 50 “viable large-scale hydrogen projects announced so far, primarily in Asia, Europe, Australia.” They estimate these projects to have a total hydrogen production capacity of 4 Mtpa, renewable power capacity of 50 GW, electrolyser capacity of 11 GW and requiring a total investment of US$75bn. (Figure 2)

The report notes that “most of these 50 projects are at an early stage, with just 14 having started construction and 34 at a study or memorandum of understanding (MOU) stage. Only two plants are operational in Asia, and they are pilot plants with less than 1,000 tonnes a year of hydrogen production capacity. The biggest projects are being planned for Australia and the Middle East, as economies of scale are required for export-oriented plants.” (Figure 3)

IEEFA notes that there is “serious risk that some of these projects may not be undertaken because of still-unfavourable economics and/or a lack of financing.” As a result, its risk-weighted analysis indicates “that only 2.9 million tonnes a year of hydrogen capacity is likely to materialise by 2030, compared to a theoretical capacity of 4 Mtpa.”

Considering that Europe alone targets 10 Mt of hydrogen production by 2030, the current plans fall far short of what will be needed.

IEEFA draws a number of other conclusions:

The report further contains an overview and assessment of 10 major hydrogen projects, a list of the major producers of electrolysers and an analysis of hydrogen production and transport costs.