North America was the epicentre of the renewal, with 80% of global deal spend attributable to this region. Europe came in at second place. Elsewhere, deal flow increased in all regions except Africa and Latin America.

What’s driving the market? And can we expect more of the same in the second half? 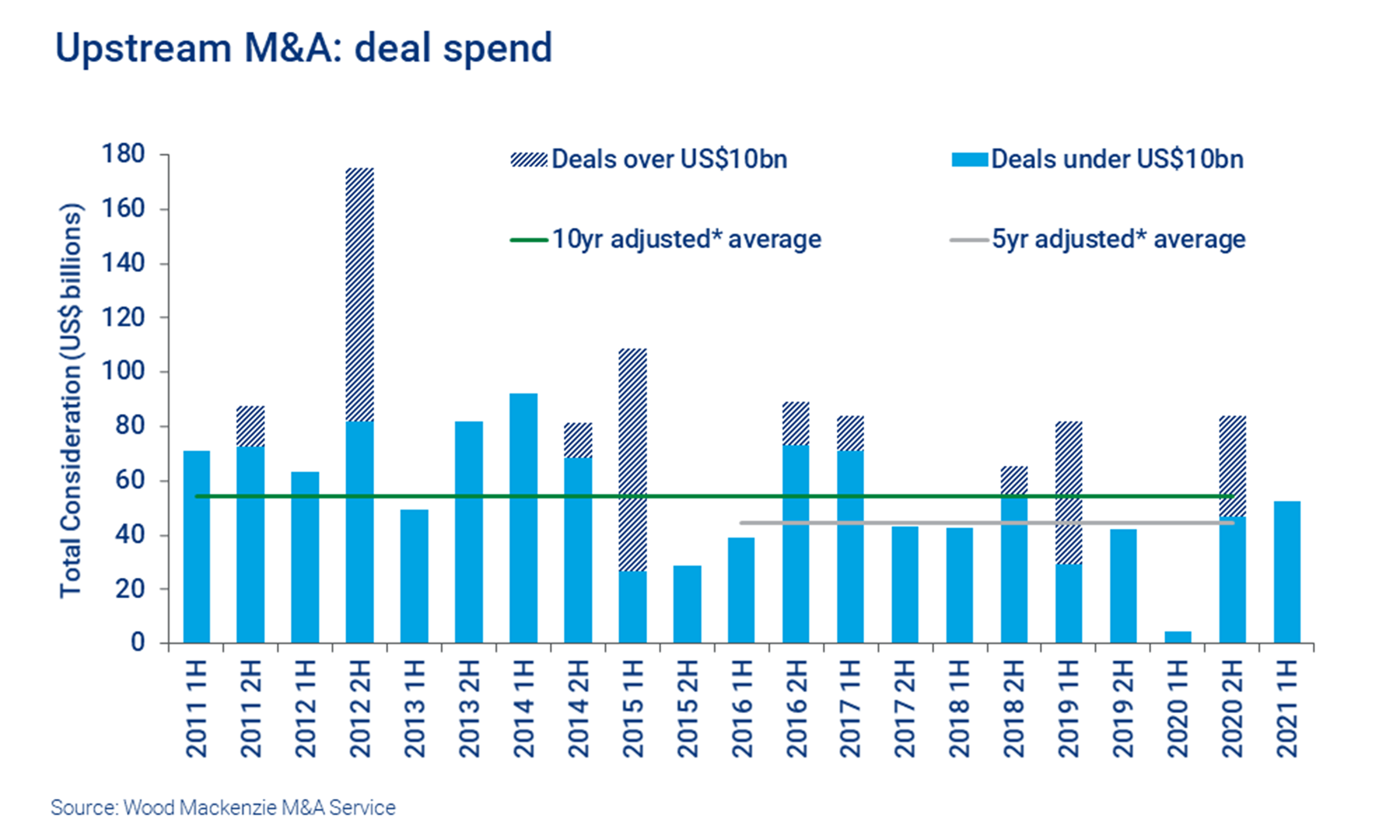 When consolidation began to sweep the industry in 2020, oil and gas companies were in a tough spot. Low commodity prices and battered share prices were powerful forces driving companies to combine.

And while the near-term business environment has completely changed this year, consolidation has continued.

North America has been the undoubted focus of this corporate revolution. This half’s ten largest corporate takeovers all took place in this region.

Of these, the biggest surprise was Cabot’s $17bn multi-basin merger with Cimarex. The deal was unusual in bringing together a gas player with a gas and oil player, just as Pioneer and others were extolling the virtues of single basin scale.

The multi-basin merger was soon followed by other diversifying transactions. From in-basin scale-ups to multi-basin mash-ups, companies combined at an incredible rate.

Disclosed deal spend fell 38%: though that should be understood against the slew of big corporate transactions that took place in the second half of 2020.

And the $52bn – around 10% below the five-year average spend – was relatively robust.

Deal spend was weighted towards corporate transactions, which isn’t unusual. However, it is rare for this to happen without any US$10 billion-plus megadeals skewing the numbers.

There were $11bn+ transactions during the period (based on disclosed consideration only). All but three of these large deals were corporate takeovers, with both public and private companies in the crosshairs.

Despite surging oil prices, deal valuations have picked up only slightly. We calculate that deals announced in H1 2021 need a long-term oil price of $50/barrel in order to break even, versus $47/b in FY20. Weak valuations will persist until more buyers emerge to create competition for assets.

More of the same for the rest of the year?

Corporate consolidation should continue to make headlines. As the energy transition progresses, we expect a lot more consolidation over the long-term.

In the short-term, for as long as investors continue to push North American companies to exercise restraint and focus on shareholder returns, corporate-level acquisitions are going to be a core route to efficient cash flow growth.

Majors' disclosed spend on upstream transactions was the lowest on record, at less than US$30 million.

The Majors' focus is clearly elsewhere – they spent over $8bn on renewable and new energy deals during the period. But in upstream, transactions only went one way: disposals totalled $7bn across 14 deals.