International gas prices, led by the Asian spot benchmark assessment the Japan Korea Marker, devised by S&P Global, are rising. Supply outages, high freight rates and high winter demand all play a part. But US domestic prices remained subdued – leading to sharply improved margins for US LNG exports, which are back up at record levels. Despite this, tight supply elsewhere and strong northeast Asian demand have reduced LNG availability for buyers in south Asia – and Europe, where storage stocks are now below 2019 levels.

The JKM was assessed at a six-year high of $12.40/mn Btu December 15, the last day of front-month January assessments, with some cargoes reportedly trading as high as $13/mn Btu for second half January deliveries. These prices are well above most winter price expectations of around $7/mn Btu and over six times the summer’s record lows of around $2/mn Btu.

The rise in Asian prices has pulled European prices up, but by far less, with the Dutch gas hub, the Title Transfer Facility (TTF), rising to $6/mn Btu mid-December; while US Henry Hub remains relatively weak at around $2.60/mn Btu on milder than expected temperatures and signs of rising supply as higher oil prices encourage shale production. 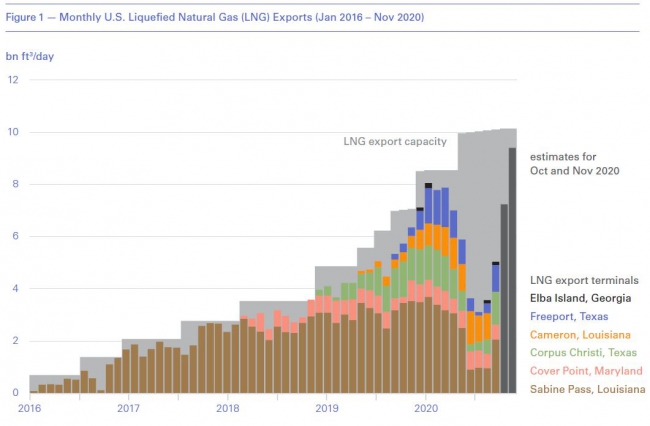 The widening spread between US and Asian prices means higher margins for US exporters, leading to a rapid run up in liquefaction capacity use rates from the summer’s lows to record levels (93% of capacity) in November (Figure 1).

However, capacity limits at the Panama Canal, and high freight rates have constrained the volume of US LNG that can be shipped from the Atlantic basin to Asia, exacerbating the rise in Asian prices. “Global supply logistics means that US LNG production, when needed due to supply glitches elsewhere, is constrained as a marginal gas supplier to Asia at this time of the year,” said S&P Global’s Ira Joseph in a recent webinar. The Panama Canal constraints mean a wait of several days, leading some vessels to go around the cape of Good Hope or via Suez. This adds to journey times. This could help drive forward North American Pacific coast LNG projects, such as Mexico’s Costa Azul, which Total announced was going ahead in mid-December.

However, some analysts did not expect the situation to last long – certainly not beyond late winter –as some supply outages end, fresh production capacity comes onstream and demand eases. In a December 16 report, Goldman Sachs said the spike in the Asian benchmark “seems too much too soon,” and prices above $12/mn Btu would not be sustainable – an oversupplied market had been expected to last for a couple of years after supply additions overwhelmed additional demand in 2019 and earlier in 2020. Platts suggested the unexpected price spike meant the market would adapt next year, offsetting the likelihood of a repeat performance – helped by an expansion in the number of Panama Canal slots, and reduced supply outages in Asia (see below), which would mean buyers could seek closer outlets, including plenty of earlier cargoes.

The US is increasingly acting as the incremental supplier to the market during the peak demand season, helped by another 2.7bn ft3/d of new US LNG export capacity in 2020, including the third train at Corpus Christi, which started up mid-December. From December 4 to mid-month, combined gas feedstock flow to the six US LNG plants topped 11bn ft3/d. As the new Corpus train comes onstream, this could rise by another 700mn ft3/d to almost 12bn ft3/d. Stronger oil prices are supporting US gas output, after falls in the autumn, which is likely to keep downward pressure on US prices and maintain availability and profitability of exports.

The underlying cause of Asian tightness is regional supply outages, including in Malaysia, Indonesia and Australia, but also among regular suppliers in Trinidad & Tobago, Norway – the Hammerfest liquefaction plant is out of action following a fire – Nigeria and Egypt. The situation was made worse in late November, when a mega-train in Qatar shut because of a compressor problem and there were constraints at several of the other plants.

The supply tightness has combined with firm demand in northeast Asia – near the top end of the five-year average according to S&P Global – where cold weather in China, South Korea and Japan has pushed local gas, coal and power prices up sharply, with limited nuclear capacity making Japan particularly vulnerable.

In China, industrial activity was back at pre-coronavirus growth levels in November, driving up power use by 9.4% year-on-year to 646.7bn kWh, according to the National Energy Administration. Domestic LNG prices in China have surged, and imports into China in December are set to hit a record high. Overall, global LNG trade in November rebounded to record levels, despite the impact of Covid-19.

Helped by above-nameplate output at Gladstone LNG, Japan and China both took 2.6mn metric tons of Australian LNG in November, higher than the same time last year, and the most since April. But this has not been enough to make up for regional outages, and Asian buyers have had to look further afield, soaking up supply and driving up prices worldwide.

The spot prices are well above oil indexed term supply, leading buyers to maximise term deliveries, which is further reducing spot availability as export plants max out. Low hydro and an inability to move domestic output to market are also pulling some US LNG into Brazil.

“It’s going to take three to four weeks before the cavalry arrives with enough supply from Qatar, Nigeria, and the US, so if you’re a buyer with immediate needs, it’s going to be costly,” said Joseph.

The spread between Asia and Europe has also widened, exceeding $6/mn Btu in mid-December – the highest since 2014 – which has slashed LNG deliveries to Europe, while some traders are turning to reloads as they seek to work the arbitrage. This is leading to a run down in stocks – in contrast to last spring/summer when surplus LNG came to Europe and storage absorbed it – highlighting the region’s increasing role in market stabilisation. Ukrainian storage is helping by acting as a backup for the rest of Europe, boosted by recent liberalisation of the capacity rules and favourable short-term transportation tariffs to and from the European Union borders. The draws have brought what were record high storage levels down close to the five-year average.

The situation is pushing up European prices. In the UK, day-ahead delivery reached 47.50 p/th in mid-December (compared with the equivalent of 80 p/th in Asia), with power trading above £50.00/MWh. Price spikes could occur here and at the Dutch TTF if temperatures drop below seasonal levels – which were forecast for western Europe from late December – and at time of press it was already leading to some upward pressure.

Looking ahead, the TTF benchmark has risen to $6/7mn Btu for next summer, and analysts say that with many buyers and sellers locking in deals/margins at these levels in the paper market, large physical LNG volumes will flow to Europe as the international market swings into oversupply in Q2/Q3 - even if TTF prices slump next spring/summer as expected. S&P Global is forecasting European storage to be full again by late August next year.

In Europe, carbon prices have also risen to new record highs of around €32/mt, adding to upward pressure on power prices. This is mainly due to progress toward a tougher 2030 carbon reduction target, alongside hopes of economic recovery linked to emerging Covid-19 vaccines. In mid-December, the UK confirmed it would establish an emissions trading scheme (UK ETS) from January 1 as it leaves the EU, to replace the EU regime. It said the scheme would be more ambitious than the EU system, reducing the cap on emissions allowed within the system by 5% from day one. It may link to international schemes in future.

The strong northeast Asian demand and multiple supply outages has priced some LNG buyers out of the market. These include Pakistan, which did not award an emergency January delivery tender after it received high prices. The situation has led to frustration that earlier lower priced LNG supply offers in 2020 were not accepted. Leading Pakistani daily, Dawn, quoted one official comparing an offer from Trafigura at $3.7/mn Btu to supply LNG for one year from April 2020 – which was not accepted – with the latest much higher offers of $15.28/mn Btu and $12.95mn Btu. Power plants may opt to burn dirtier but cheaper fuel oil instead, and the situation has given shelved plans for new coal-fired plants a boost. Thermal coal prices in Asia have also risen sharply in the past months.

In India, Gujarat State Petroleum Corp (GSPC) and Indian Oil Corp did not award tenders for January to February delivery, according to Reuters reports, while in Bangladesh, gas shortages are already evident. Even in China, some buyers are pulling back due to the high prices. PetroChina and CNOOC did not award recent tenders posted on the Shanghai Exchange, while the latest tenders form Guangzhou Gas and Guangdong Energy were also not awarded – cutting the capacity use at some of the Chinese import terminals.