Published in August, the International Gas Union’s Global Gas Report 2020 reviews last year in gas, but also assesses the effect of Covid-19 on the industry in the first half of 2020 and analyses the drivers for recovery in the next few years.

It also includes a special section on the role hydrogen might play in the gas industry in the low-carbon transition, from the point of view of its market potential and the technological options available for – and the costs of – its production, storage and transport.

Its main conclusion is that the disruption caused by Covid-19 is on course to reduce gas demand and LNG trade by 4% in 2020. This and over-supply have kept prices at historic lows.

But on the positive side, GGR points out that “abundant supply and continued cost-competitiveness, aided by a push for cleaner air, can lead to a recovery in demand to pre-Covid-19 levels in the next two years, as the global economy regains momentum.”

This will be critically dependent on continuing gas infrastructure investment, supported by technological innovation to raise efficiency and keep prices low. These are key to ensuring a role for gas during the energy transition. This includes scaling up of low-carbon gas technologies, such as biomethane and carbon capture and storage (CCS), the necessary enabler of blue hydrogen.

GGR concludes that technological innovation and policy support can help the gas industry to bounce back strongly over the next few years.

The IGU president, Joe Kang, said: "This pandemic crisis comes at great cost to the industry, the economy and society at large. It also reminded the world about the value of clean air and healthy environment for well-being, providing a unique opportunity to rebuild better.”

He said gas was not only a cleaner alternative to coal and oil in the short term but also the infrastructure could be used to transport ever larger quantities of clean gas.

GGR sees a long-term role for gas in the global energy sector driven by sustainability, competitiveness and supply security. Its key findings are:

However, investment and policy support are needed to scale up these solutions. GGR expects that through these and continuing low gas prices the industry will rebound quickly in 2021 and beyond. It may though be too early to gauge the full impact.

In the longer term, the industrial sector is expected to become more important for the gas industry, as switching from coal, fuel oil and diesel means more gas is needed. Industrial natural gas demand is expected to grow by 2.3% a year to 2040.

In the power sector, gas demand can also continue to grow as gas displaces coal and complements renewables. Appropriately priced carbon pricing schemes can be very effective in encouraging coal-to-gas switching. This has proved to be quite effective in north-west Europe, although the UK government felt it could be more effective still and added a supplementary tax to tip the scales towards gas. Low gas prices – expected to persist long into the future – have been driving coal-to-gas switching since 2018 (Figure 1).

However, Covid-19 could push back the start of carbon market schemes elsewhere in the world.

GGR states that LNG demand might also go up for heavy-duty vehicles and shipping. However, gas demand in buildings is likely to remain relatively flat. 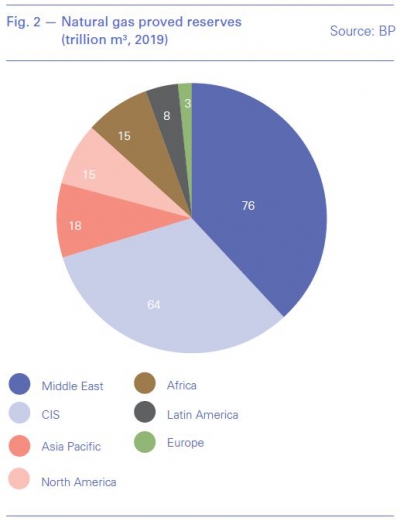 There are abundant natural gas resources to support demand growth (Figure 2). About a quarter of global natural gas production comes from unconventional sources of gas, largely from the US. According to the IEA, by 2040 this share is projected to grow to 32%.

However, more investment in infrastructure, including transmission and distribution networks and storage, as well as new technologies and innovation, will be required to bring gas to consumers.

The GGR says that “establishment of trading hubs and financial derivatives will contribute to enhanced competitiveness and liquidity in the market through transparent price discovery and risk management.”

Cost-competitiveness, enabling policy and the speed of infrastructure build-out are key to drive the recovery in natural gas demand in emerging markets after the Covid-19 pandemic. This is particularly so in the Asia-Pacific region which is most likely to be the largest growth centre with 28% of the total by 2040. China is on the way to grow its gas network by about 60% by 2025.

According to the International Energy Agency (IEA) global gas demand is expected to fall by 4% this year versus last year but then to recover, resulting in average gas demand growth of 1.5%/yr from 2019 to 2025 – lower than the pre-Covid-19 forecast of 1.8% average annual growth for the same period.

According to IEA’s ‘stated policies scenario’, in the longer-term, natural gas is expected to grow at a compound annual growth rate of 1.4%, to reach a quarter of global primary energy demand by 2040, becoming the world’s second-largest energy source despite the rapid growth of renewables. On the other hand, IEA’s ‘sustainable development scenario – based on achieving Paris Agreement goals – states that, if governments embrace stronger climate policies, global gas use could go into decline. 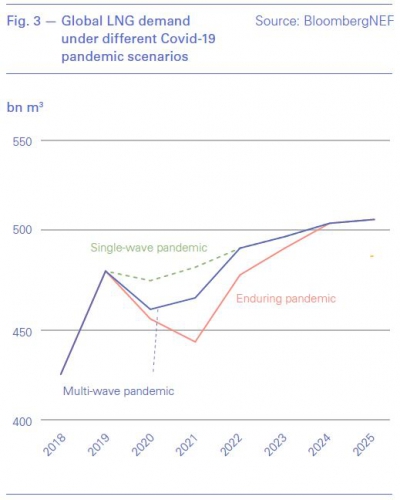 The future of natural gas depends greatly on China and India, whose immediate plans for recovery will shape global gas demand projections in the near term.

According to BNEF, global LNG demand could fall 4.2% in 2020 (Figure 3), before recovering in 2021. The market is expected to begin re-balancing as producers curb supply and the pandemic delays commissioning of new LNG projects.

However, if the pandemic stretches well into 2021 there will be knock-on implications for critical gas infrastructure build-out in emerging Asia – creating bottlenecks for gas demand growth. That may have greater implications on demand recovery post-2021. Nevertheless, post-2021 to 2022 global LNG demand growth will return driven by low prices and the long-term emission reduction policies, albeit at lower growth rates than pre-Covid-19.

In the longer-term, after a major year of final investment decisions (FID) on LNG supply projects in 2019, based on BNEF’s latest supply-demand balance forecast the global LNG market is not expected to need new supplies until after 2030 (Figure 4).

Continuing oversupply of LNG is expected to keep prices low until at least 2030. Abundant supplies and low prices can make LNG more accessible to new importers. And with increasing commoditisation and new market developments, LNG can remain a cost-competitive energy supply option in the long-run. 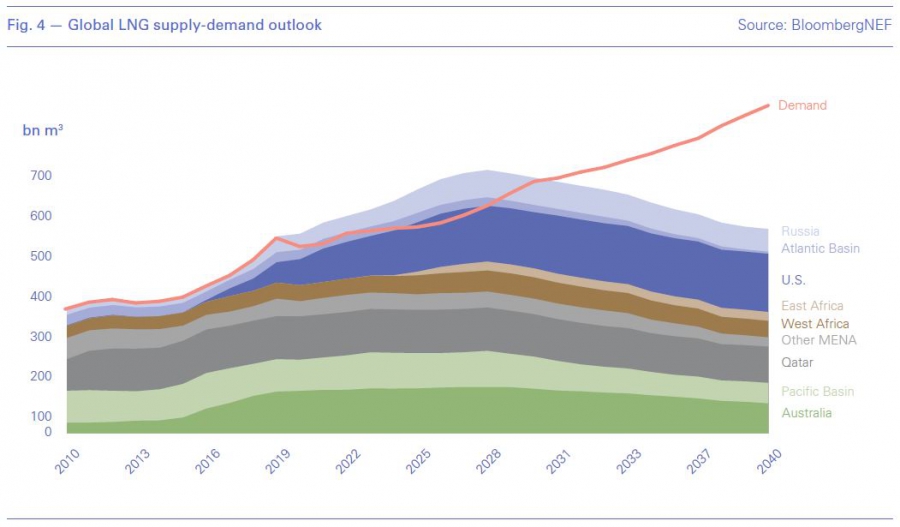 What happens beyond 2030 depends greatly on the extent at which decarbonisation policies are implemented globally.

Decarbonisation: what it means for gas

As the world recovers from the Covid-19 pandemic, economic recovery will require global energy supply to grow, but its environmental impact will need to be abated. According to the IEA, “in 2018 natural gas use resulted in 50% fewer carbon dioxide emissions than coal per unit of electricity generated by the power sector, and 33% fewer carbon dioxide emissions on average per unit of heat used in the industry and buildings sectors, than coal.”

However, BNEF’s CEO, Jon Moore, said: “It is increasingly clear that the goals of the Paris Agreement cannot be met without a substantial scale-up of clean gas technologies, such as hydrogen.”

In its report Gas Technology and Innovation for a Sustainable Future, published in July, IGU shows that low-carbon “gas technologies could abate up to 12 gigatons, or 30%, of energy-related greenhouse gas emissions by 2040 (Figure 5). These technologies include a spectrum of end use, distributed, and low-carbon gas production technologies, such as carbon capture use and storage, and hydrogen.”

Hydrogen presents a major opportunity to decarbonise gas, but it is not yet cost-competitive. IGU states that “a policy-driven scale-up could reduce delivered costs down from around $4/kg today to around $2/kg in 2030, and $1/kg in 2050, opening up possibilities in a variety of commercial applications,” especially in hard-to-abate sectors, where direct electrification with renewable power is difficult.

With strong policy support, including stronger carbon emission pricing at a global scale, by 2050 hydrogen has the potential to meet up to 15% of final energy consumption based on current policies. The marginal abatement costs from using $1/kg hydrogen for emission reductions versus low-cost fossil fuels are shown by sector in 2050 in Figure 5.

GGR recommends that “for hydrogen to achieve its potential, not only will strong policy action be needed to drive scale, but there will also be a significant need for infrastructure investment. Large-scale hydrogen networks will be necessary to connect high quality production and storage resources to users, which can help lower supply costs, increase security, enable competitive markets and facilitate international trade.”

EU’s hydrogen strategy, released in July, should give a boost to clean hydrogen production in Europe. Its priority is “to develop clean, renewable hydrogen, produced using mainly wind and solar energy as the most compatible option with the EU’s climate neutrality goal by 2050.” But it recognises that in the short and medium term other forms of low-carbon hydrogen will be needed to rapidly reduce emissions from existing hydrogen production and support the development of a viable market at a significant scale. This includes ‘blue’ hydrogen produced by decarbonising natural gas.

Snam’s CEO, Marco Alvera, suggests: “A smart way to scale up hydrogen production is blending it with natural gas in existing gas pipelines, something Snam has been testing for two years. We envision a future where clean hydrogen produced in southern Italy or north Africa can be transported through our pipelines to serve central and northern European needs. While matching supply and demand in the most efficient way, the infrastructure is expected to play a central role in supporting the penetration of hydrogen in the energy mix."

The oil price collapse in early 2020, while supporting the competitive economics of natural gas, could end-up increasing uncertainty for future investments in the energy sector, particularly in upstream oil and gas development, which may eventually impact the gas sector.

The growth in global gas supply hinges on shale production from the US, which could be challenged under an outlook of prolonged low oil prices. Similarly, there are downside supply risks for a ramp-up in conventional natural gas production across the Middle East and Russia, if the oil price slump persists for longer.

Another challenge to the future of natural gas is methane emissions. The gas industry must prioritise management, mitigation and elimination of any losses along its production and delivery value chain. This is a key factor if the part gas can play in the energy transition is not to be undermined.

In emerging countries, especially in Asia, the challenge for gas-fired generation will be its cost-competitiveness against other technologies. In most places, given the absence of low-cost domestic gas and lack of pricing on emissions or weaker pollution controls, coal-fired generation remains cheaper, especially in India and China.

The EU Green Deal sets the very ambitious target of 2050 for carbon neutrality in Europe. In the medium-term, there is some potential for emissions reduction by further coal-to-gas switching. But in the longer-term increasing decarbonisation targets will be posing challenges to gas. In contrast to GGR which sees a modest growth of 0.5%/yr, studies by the European Commission show EU natural gas demand decreasing towards 2030 and beyond.

End-user access to natural gas in various key markets remains a challenge to growth. For this reason, infrastructure build-out remains a key success factor for long-term gas demand projections, especially in Asia. Infrastructure developments, such as gas transmission and distribution pipelines, will play a critical role in unlocking gas demand in China, India and emerging Asia. Simply put, without more infrastructure build-out, gas will not be able to flow to and reach its potential consumers.

Recently published outlooks by IEA, BP, IGU and BNEF show divergence in gas demand forecasts, highlighting both the risks and the opportunities for the global gas sector during energy transition. Actions taken by both industry and governments will be crucial in seizing new opportunities and mitigating future risks.

Overall, natural gas can retain a pivotal role in a low-carbon world but it needs to remain cost-competitive. Abundance of gas supplies and low prices can continue stimulating demand growth as the global economy recovers.