The 40,000-km so-called European Hydrogen Backbone would be “an attractive and cost-effective option for long-distance hydrogen transport”, according to a study by 23 transmission system operators (TSOs) from 21 European countries coordinated by consultancy Guidehouse. Co-author Daan Peters, a director at Guidehouse, is very positive about the outcome of the study. “What we have shown is that long-distance transport of hydrogen in Europe can be done relatively cheaply, thanks to the excellent existing gas infrastructure network,” he tells NGW.

The new report, Extending the European Hydrogen Backbone, is an expanded version of a study issued last year, in which 11 gas TSOs were involved. The new study involves 21 countries and presents a full-scale hydrogen transmission network with a length of 39,700 km running from Finland to Spain and from the UK to Italy and Greece, which could be ready by 2040. 69% of the hydrogen backbone would consist of repurposed natural gas pipelines and 31% would be newly built.

Total investment cost would be between €43bn and €81bn ($52-98bn), the researchers estimate. Transport costs are estimated to be €0.11-0.21/kg/’000 km, which the report describes as “attractive and cost-effective, taking into account an estimated future production cost of €1.00-2.00 per kg of hydrogen.”

The comparatively limited costs owe much to the fact that over two-thirds of the network will be based on existing gas pipelines. “Building new hydrogen pipelines is much more expensive than converting them,” notes Peters, who managed the production of the study for the consortium. The study shows that the capital investment for new hydrogen pipelines is roughly five times as high as for converting natural gas pipelines to hydrogen.

The network’s development would have quite a limited impact on natural gas transport capacity and flows in Europe, according to Peters.

“Our plan assumes that most of the repurposed pipelines will be parallel ones which will not be in use by the time they are converted.” 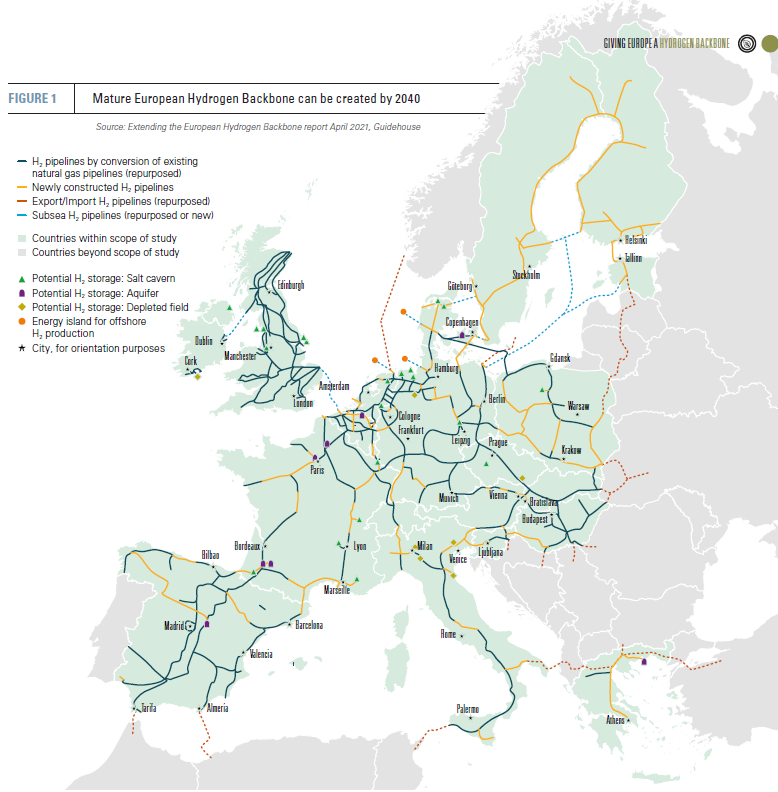 He explains that there is parallel capacity on many transmission routes. “From Tunisia to Italy there are five import lines of which only two or three are in use. From Ukraine via Slovakia and the Czech Republic to Germany there are also several routes, which are already being used less since Nord Stream 1 was built, and will see further reduction in use after Nord Stream 2 will be ready.”

In Hungary, some of the transmission capacity is also used much less after the LNG terminal in Croatia came into operation, notes Peters. However, creating a route from Spain, where large-scale solar-based hydrogen production is planned, to France and Germany, will require quite a few new stretches, by 2035 when it is expected to come into operation.

The researchers took into account existing long-term contracts, which they assume will be fulfilled completely, says Peters. “There are only some places where a choice will have to be made between natural gas and hydrogen, where market players or policymakers will need to make an active decision to phase out natural gas or to build new hydrogen pipelines.”

Peters notes the 2040 hydrogen backbone is modest in size compared to the 200,000 km of natural gas transmission capacity available in Europe today. “We analysed the amount of hydrogen that will be needed in 2040 to serve industrial hubs, heavy transport and electricity generation. That amounted to 1,100 TWh or just over 100bn m3. By 2050, the requirement may be around 1,700 TWh or 180bn m3. So the backbone will still need to be extended considerably after 2040.”Modest size

The researchers did not take into account the possible need for distribution networks to serve homes and buildings. “We are not certain as yet how this segment will evolve.”

What is needed next, says Peters, “is a good flow simulation study, to give us more insight into the dimensioning of the pipelines and the pathway.” The initial plan, presented last year, included only cost estimates for 48-inch pipelines. The new version assumes that a large part of the network will consist of smaller 24- or 36-inch pipelines. These are cheaper to repurpose, leading to lower investment costs, but more expensive to operate.

There are no major technical obstacles that the researchers encountered. “Pipelines will need to be inspected. If they contain cracks, they may need to be given a coating on the inside. Otherwise, simple cleaning with nitrogen will suffice. New pipelines will probably need to be built with higher quality grade steel that’s 10% to 20% more expensive than is used now.”

Peters notes that the amount of hydrogen that is expected to be transported through a pipeline is substantially less than that of natural gas. “Hydrogen has one-third the density of natural gas, although it flows faster. Hydrogen capacity is around 80% of natural gas capacity in the same pipeline. However, we have calculated that it’s most cost-effective to use around 60% of the capacity. This has to do with the costs of compression, which are higher for hydrogen. So this means that we assume a hydrogen pipeline will transport 60% of 80%, i.e. around half, of the amount the same natural gas pipeline would transport.”

The researchers did not consider the possibility of blending hydrogen into the natural gas system. “Blending is possible, but we don’t see it as a long-term solution.”

Peters is in favour of scaling up the supply of “blue hydrogen”, based on natural gas with CCS, if the remaining greenhouse gas emissions associated with this technology are compensated. However, he adds that blue hydrogen is likely to be only a medium-term solution. “What we see now is that by 2040, green hydrogen will become cheaper than blue. At a certain point, green will overwhelm blue with gigantic volumes, although remaining SMR and ATR units may continue to operate.”

Guidehouse will publish new research on the supply side of the European hydrogen market in June, says Peters. These will include import figures.

Some environmental organisations are critical of the hydrogen pipeline plans. They argue that there is a risk that Europe’s hydrogen strategy is used as “an excuse to prop up the gas industry and subsidise obsolete gas pipelines,” as one critic put it.

But Peters believes this is misguided. “Our analyses show that if you want to be climate neutral by 2050, you can’t do it without hydrogen. You need it to balance the grid, for your heavy transport and for high-temperature industrial processes.”

Daan Peters is a director in Guidehouse’s energy, sustainability, and infrastructure segment. He provides strategic advice on the future role of gas and gas infrastructure both in Europe and the US. He worked at the Dutch infrastructure and environment ministry and as policy advisor in the European Parliament for the rapporteur on the Fuel Quality Directive (FQD). In 2011, he joined Dutch energy consultancy Ecofys, which was later acquired by US-based international consultancy Navigant, which last year changed its name to Guidehouse.