[GGP] The US’ hidden methane problem

Across the US, a major, uncontrolled leak of a potent greenhouse gas is going unregulated and largely unnoticed.

Climate Home News analysis of government data has identified roughly 300 active and 200 abandoned coal mines, which are the source of almost one-tenth of US methane pollution.

Methane has 34 times the long-term warming effect of carbon dioxide and accounts for 10% of US greenhouse gas emissions. Its emissions from the oil and gas industry and the efforts of the Trump administration to roll back regulations on them have been widely publicised.

Meanwhile, US coal mines released 60.5 MMTCO2e of methane in 2016, with roughly the same warming impact as 13 million cars. Efforts to control the problem are being hampered despite those with the technical expertise claiming a whole industry could be built on capturing these emissions and turning them into electricity.

Data collected by the Mine Safety and Health Administration (MSHA), shows Warrior Met Coal Mining’s No 7 Mine in Alabama emits the most methane of any mine in the US.

“The coal seams Warrior Met Coal mine contain high levels of methane gas. Much of the gas is captured prior to, during and after active mining operations and distributed into commercial pipelines,” Warrior spokesperson Bill Stanhouse said in an emailed statement. Even with these efforts, the mine emits at least 262,700m3 of methane into the atmosphere per day.

Besides Warrior, none of these companies replied to requests for comment.

The data shows many of the most gaseous abandoned mines are in Kentucky and West Virginia and belonged to large operators such as Alpha Natural Resources, which also did not respond to requests for comment, and Alliance Resource Partners. Sealing shafts and allowing abandoned mines to flood can significantly decrease methane emissions.

The owner of the third-highest emitting coal mine, ERP Compliant Fuels, is part of the Virginia Conservation Legacy Fund network, a nonprofit group that claims to be operating coal mines in order to reclaim them.

Even as US coal production has plummeted over the past decade, and the number of active mines halved, coal mine methane emissions fell at a much slower pace, EPA data published in April shows. This indicates mines are not being fully sealed as they shut down.

“I don’t think our federal government should be in the business of selling fossil fuels any more given how urgent the climate problem we’re facing is, but, at a minimum, they should be taking meaningful, realistic, reasonable steps to reduce the climate impacts of the projects they approve,” said Nathaniel Shoaff, a senior attorney with the Sierra Club.

The Trump Administration has attacked rules meant to mitigate methane emissions from other sectors, such as oil and gas wells on federal land, but there are very few coal-specific rules on the books for the federal government to dismantle.

In 2010, conservation groups petitioned the EPA to regulate coal mines under the Clean Air Act. However, the EPA declined the petition, and the NGOs lost a 2014 court appeal. There have otherwise been only sporadic attempts to regulate coal mine methane, which is mainly dealt with as a worker safety, not environmental, issue.

In response to questions, an EPA spokesperson provided text that largely was a copy of the agency’s website and pointed to the Coalbed Methane Outreach Program and Global Methane Initiative as examples of the agency’s efforts to mitigate emissions.

With minimal federal action, states are deciding the future of coal mine methane mitigation. A major test case is underway in Colorado’s gaseous North Fork Valley at Arch Coal’s underground West Elk Mine, the state’s largest industrial emitter of methane.

When Arch asked the government for a royalties reduction and a mine expansion in 2017, environmentalists jumped on these requests to make the case that the government should ask Arch, in return, to handle its methane emissions.
A study commissioned by a conservation group but conducted by the mine methane consulting firm Raven Ridge Resources found that “it is technically and economically feasible to safely gather and destroy the drained gas” and that Arch could turn a profit on the project.

Shoaff argued that West Elk is the best test case for methane capture because “the government is giving Arch the ability to mine taxpayer owned coal on publicly owned land in ways that are a significant harm to all of us. But they’re not paying for it. There’s no externality associated with the methane pollution that West Elk is putting into the air”.

Estimates show the government will lose out on $8 million in granting the royalty reduction, the same amount Arch gave its executives in bonuses one business day before filing for bankruptcy in 2016. Colorado Governor John Hickenlooper supported the reduction on the condition that Arch work to capture methane it would otherwise vent, and the Bureau of Land Management granted the reduction in December.

So far, Arch’s efforts in return amount to participation in a public-private working group that is in the early stages of discussing the valley’s coal mine methane problem.

“We’re going to have some difficult discussions because economic feasibility is a giant hurdle. Markets are a giant hurdle. Investing in the infrastructure to do it is a giant hurdle. Some of the technological needs are going to be a big hurdle,” said John Messner, a county commissioner in Gunnison County who helps lead the working group, the first such effort in the country.

“But it couldn’t be a more win-win situation.”

However, several environmental groups declined to sign onto the group’s memorandum of understanding, due to its lack of implementation goals.

“[The working group] was a cover to make it seem like the governor was interested in doing something, but, at the end of the day, it doesn’t seem to be leading to any meaningful solution or action,” said Jeremy Nichols, climate and energy program director at WildEarth Guardians.

Neither Hickenlooper’s office nor Arch responded to questions about West Elk.

Two miles down the highway from West Elk, a closed mine offers an example of methane capture and reuse.
Vessels Coal Gas, Inc. operates a small-scale electricity generation project, which collects and burns methane from mine workings. It produces three megawatts of electricity while flaring excess emissions.

Tom Vessels, the company’s CEO, argues for a regulated price on carbon. He said his generation price is about three times the average wholesale level, so his project is possible mainly because an environmentally-conscious buyer – Holy Cross Energy, which provides Aspen Skiing Company’s electricity – was willing to guarantee the investment.

“Nowhere on the planet do you get people buying waste methane unless there’s a policy supporting it. If you’re competing with large power plants that are making 50 megawatts plus, you can’t compete on price, so it has to be based on policy,” Vessels said, pointing to successes in China and Germany.

Most of China’s coal mines are state controlled, and the volume of coal mine methane captured and used increased six-fold between 2005 and 2012. According to the Global Methane Initiative International Coal Mine Methane Projects Database, Germany, with its relatively strong green party, is operating 43 coal mine methane capture or conversion projects, two more than the US, which has a coal industry more than four times as large as Germany’s.
The success of these projects elsewhere is important, especially in China.

The EPA estimates that by 2020 coal mines will release methane with the equivalent warming impact of 166 coal-fired power plants. China, the world’s largest emitter, will account for nearly 53% of these emissions, while US mines will release the second most at 10.5%.

Eric Ripley is the programme manager at the American Carbon Registry, a non-profit that oversees verification and issuance of carbon offsets in California’s cap and trade program, and he expects an increase in methane capture projects.

“The environmental markets have emerged and evolved, and there are opportunities here to generate revenue from methane mitigation,” Ripley said. “There certainly have been and will continue to be mine closures, and I think we’re likely to see additional abandoned mine projects as a function of that.” 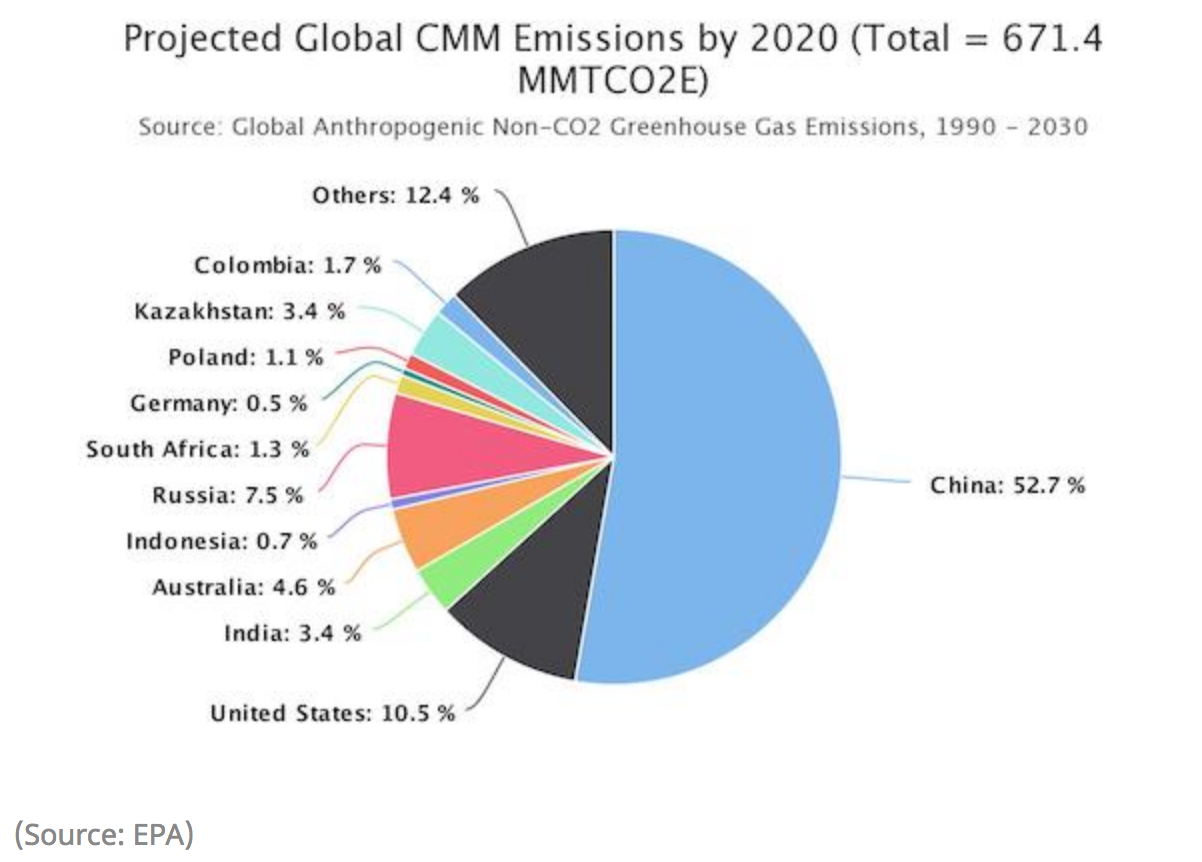 The EPA released a report in January that identified 25 underground coal mines across eight states that have a high potential for methane capture. Together, these sites account for 78% of methane emissions from underground coal mines in the country. At many of these sites, there has been no effort made to deal with methane emissions, meaning new projects would have a significant impact.

Last July, California voted to extend its cap and trade program through 2030, effectively guaranteeing a market for coal mine methane for the near future, and the American Carbon Registry is rewriting carbon offset rules to encourage new capture projects.

“[These projects] eliminate a highly potent greenhouse gas, and there’s a revenue stream associated with it. There’s a business case for these that goes beyond the politicisation of the sector,” Ripley said