Technology: Getting LNG on the rails [LNG Condensed]

A combination of lower operating costs and reduced emissions is encouraging rail companies to use LNG as a locomotive fuel. Operators estimate the reduction in fuel costs at 20-40%, with about the same saving in carbon emissions in comparison with diesel engines, although the benefits in comparison with electric locomotives obviously depend on the technology used to generate the electricity. Proponents of LNG technology also argue that it eliminates emissions of sulphur oxide and particulate matter, while greatly reducing nitrogen oxide emissions as air quality standards become more stringent in many countries.

Florida East Coast Railway (FECR) introduced its first LNG-powered locomotive in 2015 and had converted all 24 of its locomotives to LNG by 2017. Each locomotive is linked to a  container containing a cryogenic tank on a rail car, which was developed by Chart Industries. The tank is surrounded by a steel frame to protect it in the event of collision, derailment or other incidents. The tank itself consists of a further two steel layers separated by a thermal insulation layer.

Submerged pumps force the LNG out of the top of the tank and into the locomotive, where engine heat regasifies it. The locomotives had travelled 15mn km by this March, using 2mn gallons of LNG in the process. A full tank allows a return journey of 1,448km at speeds of up to 96km/hour. FECR’s road haulage subsidiary is now also dual fuel, so its trucks can use either LNG or diesel. The speed of adoption seems to be quicker for rail than for road in part because rail involves transport between fixed points where the fuel can be stored. Road haulage is rarely so rigid.

In Europe, a consortium of European companies and institutions led by Spain’s Enagas has set up the CORE LNG project to develop LNG-fuelled cargo vessels and locomotives, as well as a logistics network for transporting LNG by road and rail. A pilot project has been set up to test the fuel in rail services at the port of Tarragona using a variation of the Adif 310 diesel locomotive. GPO Engineering is currently assessing the modifications that need to be made, including in weight distribution and maintaining the centre of gravity in a stable operating position, as well as assessing maintenance needs and costs.

A total of 23 other studies are being undertaken by the consortium partners on different aspects of the technology required, including on the logistics and bunkering side, plus 14 on software requirements. The tests are centred on the Iberian Peninsula, partly because it possesses eight LNG terminals that can supply the fuel, while Spain has 40% of European LNG storage capacity. The results are due at the end of next year. The European Commission is providing €16.5mn ($18.4mn) of the €33mn total project costs.

The LNG is stored in a standard sized container for transport by road, rail and sea where applicable. CORE LNGas said that it “can be easily handled from one means of transport to another, allowing the gas to travel long distances in a faster and safer manner.” The consortium estimates the reduction in carbon emissions at 30% in comparison with “traditional fuels”, presumably diesel.

In March, Hitachi Rail and Italian gas supply firm Snam signed a memorandum of understanding with rail utility FS Group to set up a pilot project to operate two LNG-powered locomotives to be deployed on popular tourist routes. FS Group estimates that deploying 100 locomotives fuelled by LNG would reduce its fuel costs by €2.5mn/year, as well as cutting its carbon emissions by 20%.

Meanwhile, in India, Indian Railways has announced plans to develop its own LNG- powered locomotives, taking advantage of India’s growing LNG imports. The company currently accounts for 3% of all Indian diesel oil consumption and 1.8% of national power consumption. It introduced a policy of reducing its emissions wherever feasible in 2015, including through developing its own solar and wind power projects. The company completed trials of CNG and LNG-powered locomotives last year, but favours the latter because it takes up to three times less space per unit of energy and will reduce fuel costs by 40%, although it calculates installation costs will be 30% higher than for CNG.

Russia’s Sinara Transport Machines (STM) has signed a contract to supply Gazpromtrans with 24 LNG-powered locomotives between this year and 2024; 14 have 2,000 horsepower capacity and ten have 1,200 horsepower. The engines are being manufactured at STM’s Lyudinovsk Diesel Locomotive plant and will be deployed on the 572km Obskaya to Karskaya railway, which links to the Yamal LNG project at Sabetta, which is already in operation. 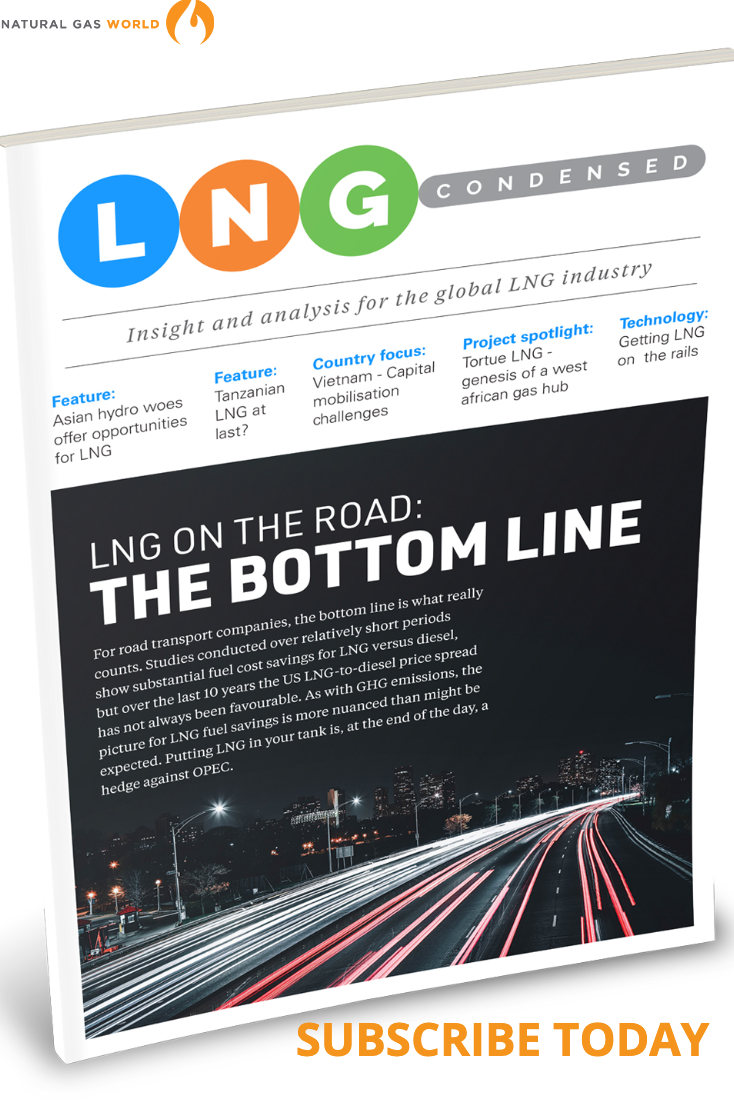 Gaspromtrans has yet to reveal the source of supply, but it seems likely that Yamal will provide the LNG for the trains. Statements by the two companies suggest that the main motivation is financial, as the new locomotives are expected to save 30-40% in fuel costs. Gazpromtrans and Gazprom Gazomotornoye Toplivo signed an agreement in October 2017 to promote the use of LNG as a rail fuel. Gazprom Gazomotornoye Toplivo was set up to encourage the use of natural gas to power vehicles in Russia.

The Yamal deal follows a separate contract between STM, Gazprom, Russian Railways and Transmashholding signed in 2016 to operate LNG-fuelled trains on the non-electrified sections of the Sverdlovsk railway, which is part of the Trans-Siberian railway. Two refuelling depots are being built at Tobolsk and Surgut, while Transmashholding is developing a new model of gas-powered locomotive to operate on the line.

Russia’s interest in LNG-powered locomotives goes back as far as 2005, when Russian Railways started work on developing its own gas-powered engines. It tested – apparently successfully – a 15,200 ton freight train in 2009, but the decision to bring STM and Transmashholding on board suggests they will take the lead on locomotive development. Transmashholding, which is registered in the Netherlands, is the biggest locomotive manufacturer in Russia.

Russian Railways also tested STM’s GT1h- 002 prototype 8.3 MW LNG turbine-electric locomotive on the 636km Surgut–Korotchaevo line in western Siberia last year, hauling a gross weight of 9,000 tons. It completed the journey without refuelling. The GT1h-002, which operates at 100km an hour, has been developed by STM at its Lyudinovsky plant. Russian Railways plans to begin using the train by 2022 and says that it complies with EU Stage V emissions standards.

You can find this article in full and much more by subscribing to our monthly complimentary publication LNG Condensed today. It's FREE!