Getting by, with a little help from their friends [Gas in Transition]

The commercial world has undergone a major turnaround in the past year, much to the benefit of the companies fuelling it. Vaccines developed since last November and extreme temperatures have contributed to the recovery in demand, especially in Asia.

Global gross domestic product is back to pre-pandemic levels. Demand for energy is soaring, and prices for gas have rocketed the most, with LNG arbitrage levelling out the regional differences.

LNG now is higher than Brent crude: at $15/mn Btu on the spot markets in Asia and Europe as of August 6, it is equivalent to over $100/barrel assuming a slope of under 15%. This has had a knock-on effect on gas storage injections which are well behind the average for August; and hence the growing risk of prices peaking even higher in this coming winter’s prompt market. 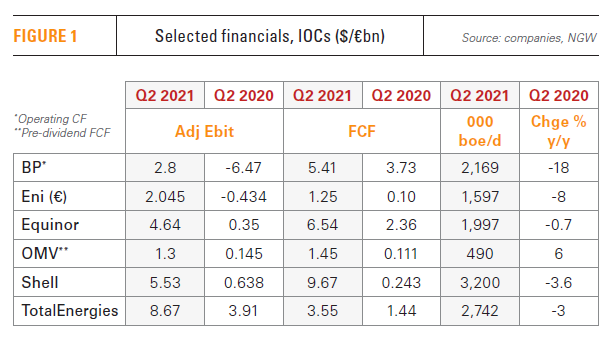 LNG buyers with long-term contracts will be reversing last year’s practice and seeing how many more cargos they are entitled to take rather than defer. This has had consequences for demand in the US, where the Henry Hub price has gone above $4/mn Btu, compared with projections last year of a stable $3/mn Btu almost indefinitely.

On the oil side, just as the trigger for the collapse was beyond the international oil companies’ (IOCs’) control, so too has been the recovery in demand. There are still pockets of resistance: European refining margins are stubbornly low – although not universally so, witness MOL – with the continuing low demand for middle distillates.

Drastic cost-cutting measures, the maturing of past upstream investments – and to a very great extent the unexpected discipline of the OPEC+ group which has consistently refused to open the taps – have put a spring in the step of many IOC CEOs, if not Rosneft’s. Low inventories are keeping the floor under prices, despite the cartel members’ temptation to ramp up production.

Companies who took upstream FIDs in the recent past are now bringing oil and natural gas to market at what at the time must have been unimaginably high prices. But conversely energy suppliers – on the retail or the wholesale side – without an upstream hedge will be in for a difficult time.

Eni has made acquisitions in energy retailing in Spain and extended its position in Italy, backed by renegotiated LNG and pipeline gas contracts with Algeria’s Sonatrach. Its retail arm earned €71mn before tax and interest, up €48mn, thanks to effective marketing activities, a growing customer base and better margins. Its wholesale business suffered year on year as the premium to the Dutch Title Transfer Facility was crunched but overall the factors were positive. This year saw the start of gas flowing from Azerbaijan to Italy. Eni is not a partner in the Southern Gas Corridor. But new contract terms with Sonatrach and Egypt and better LNG returns more than offset this.

France’s TotalEnergies, an even bigger LNG trader and generator, saw its Q2 2021 sales of both gas and electricity rise on the previous year, by 17% and 35% respectively. It also managed a 73% increase in generation output to 5.1 TWh. It now has over 5mn retail customers in France. Its sales were helped by the purchase of four combined-cycle gas turbines there and in Spain late last year.

But in the UK where pure-play utilities proliferate in the household sector, more bankruptcies are possible. Energy market regulator Ofgem said in a blog in July, since confirmed, that it will allow suppliers to charge more from this October, raising the maximum for the majority of UK households. “Since we last updated the level of the cap in February, the wholesale electricity and gas prices it tracks have increased by over 50%,” it said. “Rising gas prices increases the cost of heating homes and also pushes up electricity prices.”

This is not the best background to be arguing the case for gas as an affordable commodity: much more of this, and nuclear starts to look a competitive source of even lower-carbon energy. However, wholesale European gas prices are assessed much lower from next summer.

The assumptions underpinning the IOCs’ short-term dividend and buyback plans would have seemed optimistic a year ago but now are merely conservative. Financial discipline remains tight when it comes to upstream and caution remains the watchword. BP CEO Bernard Looney made clear that the price revival was supply and not demand-led and he suggested more tightness was to come in the wake of the expected under-spending in many projects.

Already 6,000 staff lighter, the company has also realised its cost savings plan for the year six months ahead of time while bringing on stream another 200,000 boe/d from four major projects, paying down debt and promising 4% dividend growth. Investor loyalty is important after the share price took a battering last year.

Nevertheless, like Eni’s CEO Claudio Descalzi, Looney felt confident enough to announce the reversal of earlier impairments leading to a balance-sheet gain for BP of $3bn. Norway’s Equinor went even further and reversed upstream costs too, although Shell reversed neither.

This year though it has adjusted the crude price curve so while it stays around $55/b to 2050, the front end of the curve is higher at $60/b reflecting supply constraints and the back is lower as the energy transition accelerates. So it has restored $3bn. This fits in with its divestment plans, as it aims to reduce production by 1mn boe/d by the end of the decade.

However, that does not mean only divestments for BP from now on. Looney told analysts August 3 there were also grounds for asset acquisitions, as long as the result was a more efficient and profitable upstream business. A case in point are assets in the Gulf of Mexico owned by BHP, some of which BP operates.

Margins and values – the pursuit of the most resilient hydrocarbons – are what drive BP’s decisions, he said, referring in that connection also to advanced plans to merge its Angolan assets with those of partner Eni, and the value that had been created by merging with Aker offshore Norway.

On the other hand, the series of floods and fires this year have also been used as a stick with which to goad oil and gas producers into a quicker abandonment of what is now a very profitable business. These calls can only grow louder as the COP26 summit in Glasgow draws nearer. 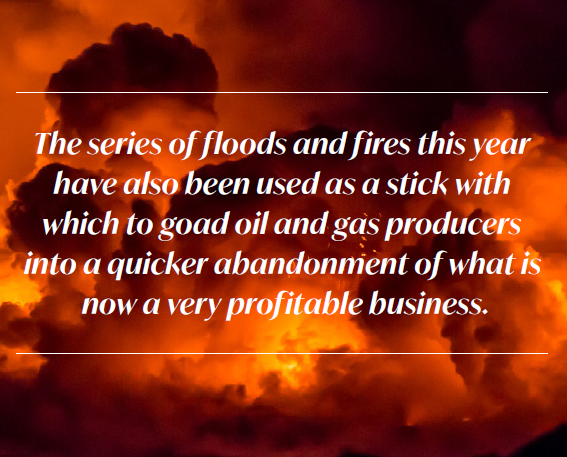 But given the resurgence in the oil prices and the sense the world is coming back to normal by fits and starts, the CEOs have had to play up – and at the same time play down – their green agenda. Oil and gas are vitally important today: but that is a hard message to sell while activist investors must be kept on board.

Thus it was that when asked about development plans for the Cambo oilfield offshore Scotland, Shell’s CEO Ben van Beurden told journalists that the UK will need oil and gas for decades to come. For the UK to block the project on the government’s own ‘net zero carbon’ grounds would be mere virtue-signalling, he said. Local jobs and the economy would go down and energy imports rise, with a bigger carbon footprint. And carbon footprints are global.

On a brighter note, Shell’s Whale oil and gas project in the Gulf of Mexico, which will save money by replicating technology used for Vito, offers a rate of return above 25%, the company says. Renewables by contrast offer only utility rates, and need long-term, government-backed assurances even to achieve those.

Looney trumped that with his reference to BP’s expected 80% rate of return from its Haynesville, US production – and that is at a Henry Hub price of $3/mn Btu. September had broken through the $4/mn Btu mark as of early August.

He also rejected the suggestion from an analyst that BP was investing ahead of the curve, boasting of 50 GW of potential renewable projects the company had rejected in Q2 alone. And he said that by 2030, BP’s ambition was to have no more than 1-3% of the global renewables supply, which is commensurate with its ambitions for oil and gas.