Germany will be unable to meet its net zero target by 2045 if it pursues an all-renewables, electric-focused approach to decarbonisation, according to a new research paper published by the Oxford Institute for Energy Studies (OIES). What is more, this approach will jeopardise reliable energy supply, the report’s author, senior visiting research fellow Ralf Dickel writes, urging the country to embrace blue hydrogen and carbon capture and storage (CCS) as additional tools for reaching its climate goals.

“The inclusion of CCS from power plants and blue hydrogen from autothermal reforming is essential for achieving Germany’s decarbonisation goals,” Dickel explains. “It will open a challenging but feasible way to reach net zero by 2045 and keep the high reliability of energy supply.”

Germany’s coalition government must develop a concept for CCUS and seek to foster its development, he continues. But because of political and geological restrictions for CO2 sequestration in Germany – a 2012 law makes it defacto impossible – the government should reach out to Norway, and make use of its significant offshore storage potential. Norway has a raft of CCUS projects underway, including the Equinior-led Northern Lights initiative. Indeed, the Norwegian government estimates that as much as 80bn metric tons of CO2 emissions could be stored off the country’s coast. At the current level, this is equivalent to Germany’s emissions over 100 years. Norway has limited need for CO2 sequestration of its own compared with many other European countries, as its power supply is 100% renewable. Its government is therefore seeking CO2 sequestration customers across Europe.

In its coalition agreement, the German government has committed to cutting the country’s greenhouse gas emissions by 65% versus the 1990 level, and a reduction of 40% has already been achieved. To deliver further progress, the government wants to phase out lignite and hard coal power production by the end of the decade, expand renewables, and continue relying on gas as a stabilising factor. Meanwhile, its remaining nuclear plants are due to be closed at the end of this year. It also envisages power demand growing as a result of increased use of heat pumps. 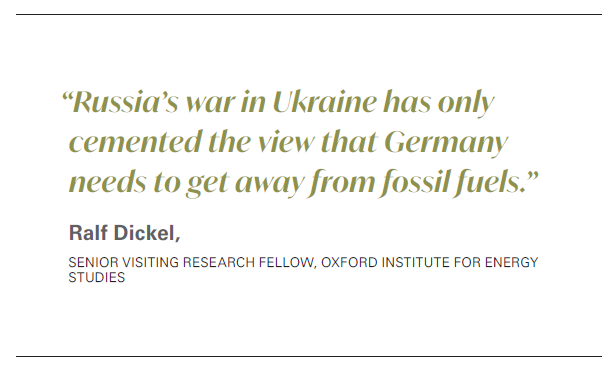 Gross electricity production is expected to rise 20-32% by 2030 to 680-750 TWh, according to the government, while renewables should come to account for 80% of total supply. However, CCUS is notably absent from the strategy, with CO2 sequestration mentioned only implicitly with a vague reference to “technical negative emissions.” The government also rules out any use of infrastructure for fossil fuels by 2045.

“This strongly suggests an underlying model of an all-renewables world by 2045, where the necessary input of energy-rich molecules comes from green hydrogen from renewable electricity via electrolysis,” Dickel writes. “This concept of an all-renewable energy supply implied by the [coalition agreement] depends on uncertain technology developments followed by large-scale deployment, which are not addressed in any substantive way.”

Russia’s war in Ukraine has only cemented the view that Germany needs to get away from fossil fuels, he says, and the public discussion erroneously suggests that intermittent renewables can simply replace dispatchable, on-demand oil and gas. To illustrate this point, he notes that on November 7, 2021, renewables output peaked at 43.9 GW at midday, only to drop to 4.0 GW by 00:00 on November 9. In the first half of last year, renewables production was 15.1 TWh lower than in the same period of 2020.

For its energy supply to be reliable, a country must be able to cover its entire peak load with dispatchable power sources such as gas, or with imports. But Germany will find it increasingly difficult to rely on imports, as neighbouring countries also expand the use of renewables, especially as low wind levels in winter often occur across several countries in northwest Europe at once.

And in any case, Dickel argues that the speed at which Germany is looking to expand its renewables is highly ambitious based on past performance. Meanwhile, the conversion of renewable power into hydrogen via electrolysis is still at a very early stage of development globally, while in Germany, the development of storage facilities for hydrogen is still at the conceptual discussion phase. And because it relies on renewable energy, green hydrogen supply is also intermittent. Even making very optimistic assumptions about how quickly Germany can reduce final energy demand efficiently, he estimates that the country will miss its 2045 net-zero target by some decades if it continues to pursue an all-renewables approach.

The solution is therefore for Germany to continue its pursuit of renewables, but at the same time embrace CCS to make fossil fuel consumption as clean as possible, when it is needed to fill in gaps in intermittent renewable and green hydrogen supply, Dickel writes.  This means either converting natural gas into blue hydrogen, with CCS involved, or simply using the technology at fossil fuel-burning power plants. This creates sources of low-carbon electrical and molecular energy that is dispatchable.

“Adding CO2 sequestration to Germany’s decarbonisation strategy is an essential element in order to achieve net zero by 2045 and guarantee reliable supply of power and energy-rich molecules without CO2 emissions,” he states. “With the political support required, which may well be comparable with that given to renewables, adding CO2 sequestration to the renewable and energy efficiency policies offers a good chance of achieving net zero by 2045 while maintaining reliability of energy supply.”

Consumers will pay extra to support CCS deployment, but they will pay more in emissions trading system (ETS) prices and other emissions penalties without the technology. Indeed, the recent climb in ETS prices means that, increasingly, CCS projects can rely on the carbon market alone to be viable, rather than depending on other types of support and incentives. What is more, Dickel argues that if Germany fails to adopt CCS, its industry will be disadvantaged compared with those in countries with a more pragmatic approach to the technology, such as the UK and the US.

Germany should work on developing CO2 pipeline infrastructure, to carry the waste gas to transfer points at the North Sea, for delivery to Norway, develop the necessary concept for CCS, and fill in missing pieces of legislation, to ensure the technology’s speedy deployment, Dickel notes.

Meanwhile, blue hydrogen production can enable Germany to decarbonise the non-electric energy sector in parallel with the power sector, and help create a market ready for when green hydrogen costs are lower.

“A global H2 market is not in sight anytime soon,” the expert says. “Germany should do its own homework with a speedy rollout of renewables and a swift design of CO2 collection and sequestration in cooperation with Norway. Outsourcing the challenges of producing CO2-free hydrogen to other countries would in any case take achieving its decarbonisation targets out of Germany’s hands.”