Last year saw Gazprom’s exports start off slowly relative to the year before; and the summer was particularly weak as the warm weather and the Covid-19 restrictions coincided. But they regained their composure in the autumn and almost caught up for the rest of the year (Figure 1). 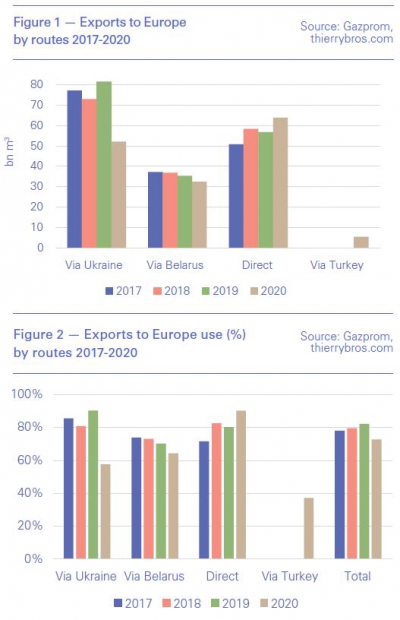 Among the commercial blows was the payment for what turned out to be unnecessary transit capacity through Ukraine for most of the months, while the requirement for extra capacity in October had to be covered by a separate payment. And as NGW went to press, the Gas Transmission System Operator of Ukraine (GTSOU) was offering to sell Gazprom additional capacity to take advantage of the soaring Dutch gas hub price.

In 2020, Gazprom transited just 52bn m³ through Ukraine, against its 65bn m³ ship-or-pay contract. On January 1, 2021, Gazprom began supplying gas to Serbia and Bosnia and Herzegovina through the new route across Turkey and Bulgaria after flowing through the subsea Turk Stream pipeline.

This pipeline could further reduce transit flow via Ukraine but it does not change Gazprom’s overall  export data. We should therefore expect Gazprom to transit about 50bn m³ via Ukraine this year. European data in this article refers to all of continental Europe – inclusive of the EU and the UK – but excludes Turkey.

Belarus is in the news as democratic peaceful protests are seeking regime change. It is also an important transit country as 21% (32bn m³/yr) of Russian pipeline exports to Europe need to cross it. There have always been at least 2.1bn m³/month transiting, through the Gazprom-owned network. A pricing procedure for deliveries in 2021 was finally agreed December 24. But transit issues could pop up any moment if the political situation deteriorates further. 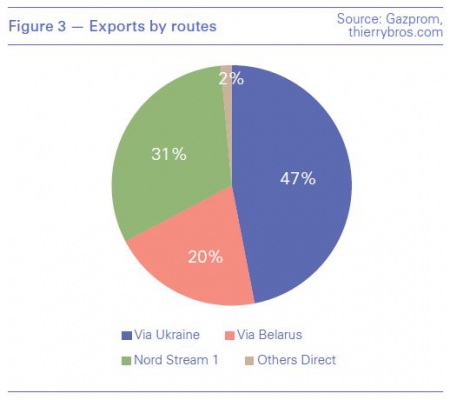 Ukraine’s transmission system needs now to be scaled down as it is unlikely Gazprom will ever need to transit more than 90bn m³/yr and, as shown in Figure 2, most of the routes try, for efficiency reasons, to operate at a high load factor. On the other hand, we expect the dedicated TurkStream line for Europe to operate more in 2021 after the recent connections to Serbia and Bosnia and Herzegovina.

After both the US House of Representatives and Senate overrode in a bipartisan way the veto by president Donald Trump of the National Defense Authorization Act (NDAA) 2021 with additional sanctions related to Nord Stream 2, this became law on January 1. This triggers a 30-day period for non-US persons to wind down participation in the project.

Foreign entities providing insurance for the pipe-laying vessels and testing/inspection/certification of the pipeline are expected to walk away. DNV – which lost the GL part of its name earlier in January -- which was in charge of the certification, ceased work for Nord Stream 2 in November 2020 and confirmed it will no longer provide that service to this project. Now it is for Zurich Insurance Group to make up its mind on its willingness to continue to provide insurance for it. The saga continues and the delays are becoming more obvious making it more probable that the line will not be finished this year or perhaps any year, as posited in August 2020. 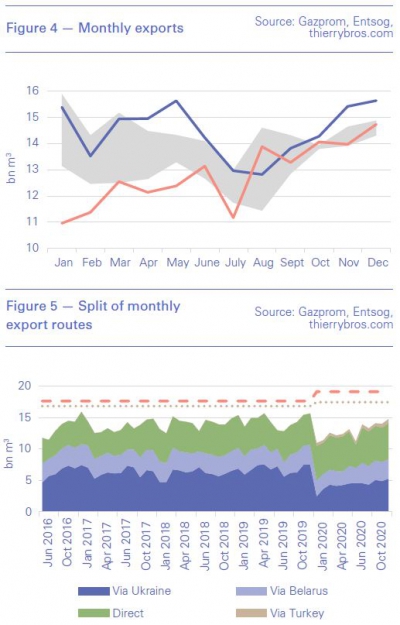 Gazprom CEO Alexei Miller said in his New Year’s Eve speech last month that “by the end of this year, Gazprom will have produced more than 452bn [Russian] m³ of gas. It should be noted that our production capacities exceed the annual production volumes by almost 100bn m³ of gas.” In my model published earlier we had then estimated Gazprom at this exact level with 61% of the total spare capacity.

My analysis shows that Gazprom exported 153.7bn m³, using European metering standards, down 20bn m³ or 11.5% compared with 2019. “In fact, this amount ranks fifth in our ‘ranking table’ for gas export totals,” Miller said. And in its presentation to analysts on December 22, Gazprom said it expected exports for Europe (including Turkey) to grow by 7% in 2021. The most important element of this presentation was the price change, from $125/’000 m³ in 2020 to $170/’000 m³. This is not only a 36% growth showing that gas suppliers have erased the Covid-19-related demand cut thanks to their flexibility but most importantly, the difference between a loss making and a profitable business. It is worth remembering that the production of gas is a rent-seeking business; ie profitability sky-rockets when the price moves up.

December exports up on month, down on year

Gazprom used all routes (Figure 5) more in December in order to push 5.5% more gas than it had in November. But the drop was 5.8% compared with the year prior figure as Gazprom then had to deliver as much gas as possible before the December 29 deadline. Until that date, as the availability and cost of 2020 transit via Ukraine was unknown, the only mitigation strategy was to fill EU storage by maximising all import routes. 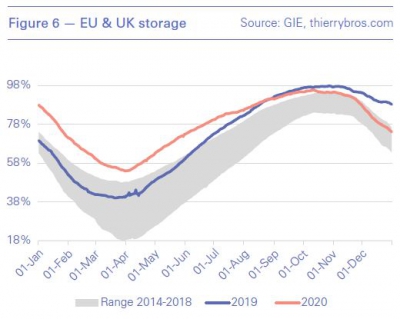 Storage (Figure 6) reached its peak October 11 last year, reaching 95.7% full, slightly lower than the record high reached last year (97.8% on 28 October). Since mid-October however inventories have been back in the historical 2014-2018 range. This year began with storage 73.7% full.

The Covid-19 pandemic will continue to restrain EU demand and hence import needs. But as we have long been writing, Gazprom is not the only producer to swing supply any longer. All producers are sharing the burden of reducing volumes to Europe. 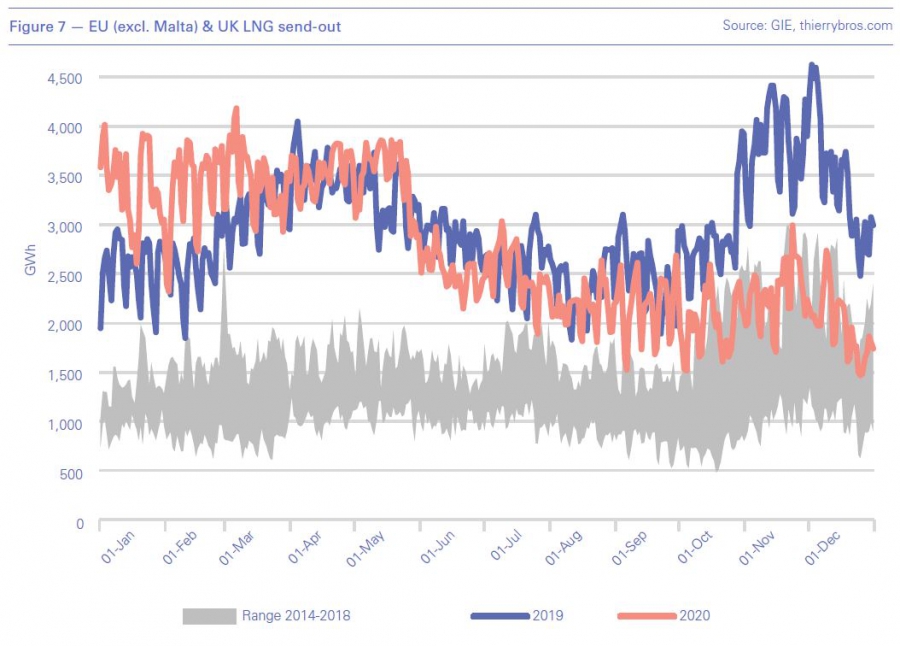 Comparing Gazprom pipe exports to Europe and LNG regasification, the graphs show clearly that if LNG has an optionality value – it can move to where it provides the highest profit – it lacks flexibility. It cannot be turned on and off at short notice and so it kept arriving long after the economics had stopped making commercial sense. In an energy transition, where Europe and Asia are long on energy in the summer thanks to high solar and low demand and very short in winter thanks to low solar and high demand – and very low wind on occasion leading to blackouts – LNG production will need to become flexible. LNG producers should think of implementing new ”produce less, earn more” contracts where they swing supply in summer to tighten the winter balance.