For the 22 EU member states that report timely data in the Jodi database, gas demand in Jan-July 2019 was up 3.2% compared with the same period last year. The top three markets saw contrasting developments: while in the UK demand was down by 3.6%, it was up in Germany (+4.4%) and Italy (+5%). This can be explained by the coal-to gas switching that is happening in Germany and Italy owing to low gas prices. Coal-fired generation is nearly finished in the UK thanks to its carbon floor price, introduced a few years ago.

The UK being the leader in fighting climate change, this shows that quick coal-to-gas switching could be followed by gas-to-renewable switching. This real-life example should push the gas industry to think now about its post-2025 narrative once coal has been fully displaced in Europe. 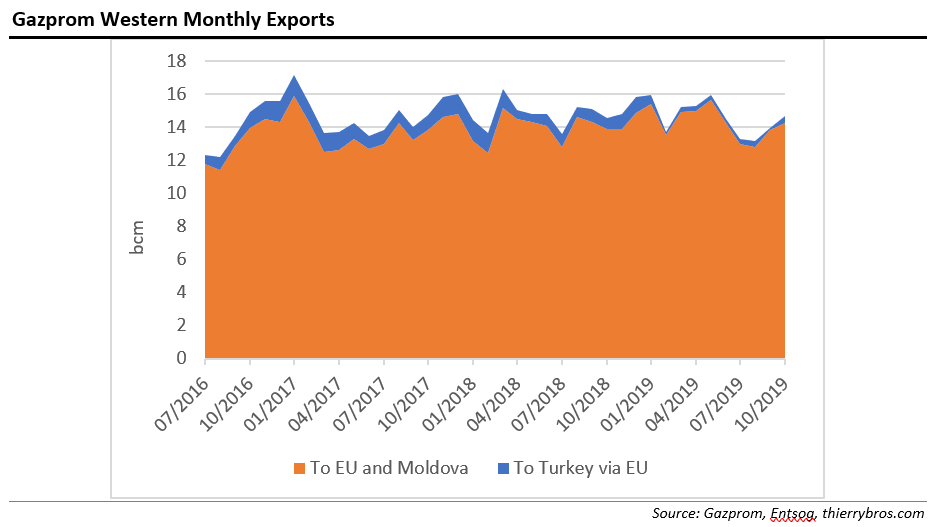 After low Russian transit to Turkey via EU since February, transit completely stopped between September 17-30. Since October 1, flows have resumed. 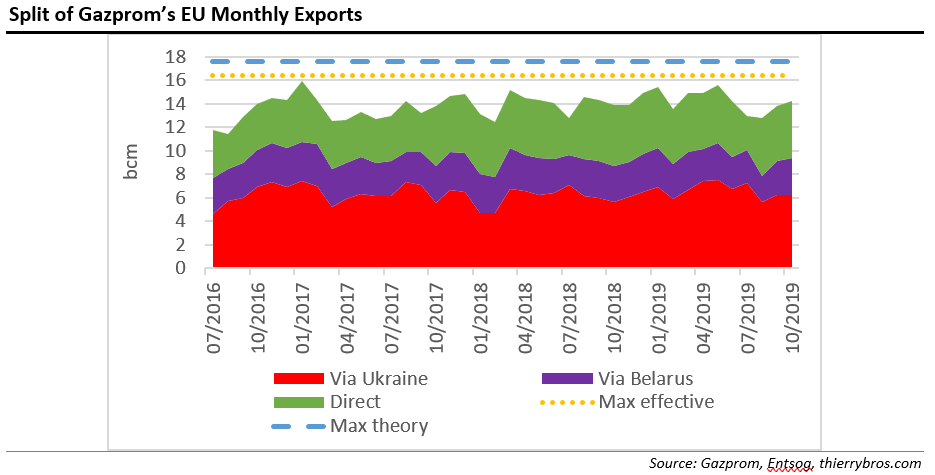 The European Court of Luxembourg annulled September 10 the European Commission’s 2016 decision that allowed Gazprom to book all Opal capacity. The court’s ruling means Gazprom is now restricted to the entitled volumes under a 2009 decision exempting it from EU internal energy market rules approved by the EC and the German regulator. The two outgoing pipes from Nord Stream 1 are NEL (with a capacity of 62mn m3/d); and Opal (now with 65mn m3/d allowed out of the 100mn m3/d total capacity). This means that Nord Stream 1 is now theoretically limited back to 127mn m3/d out of a total 151mn m3/d or 84% on an annual level… 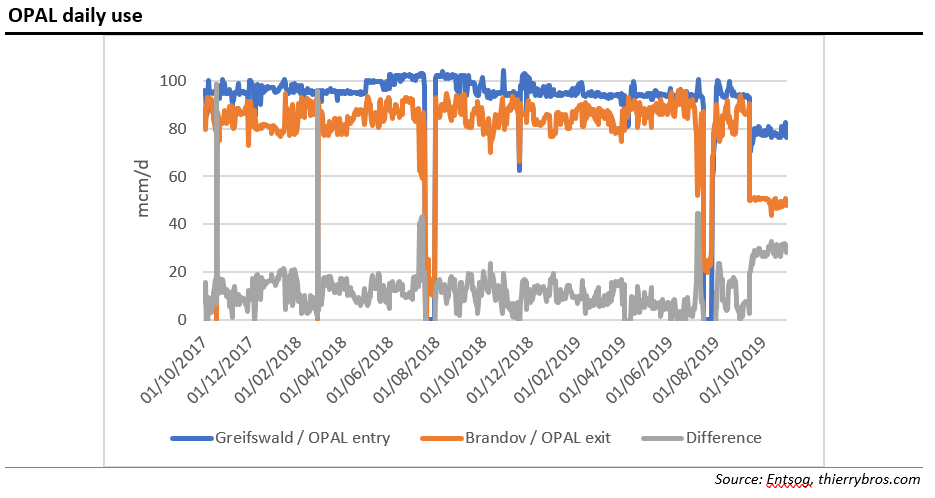 As the graph shows, Gazprom has managed to implement the full Court ruling reduction at the exit of the Opal pipe without reducing so much the flows at the entry level. It also managed to incrementally increase NEL flows by up to 15mn m3/d. 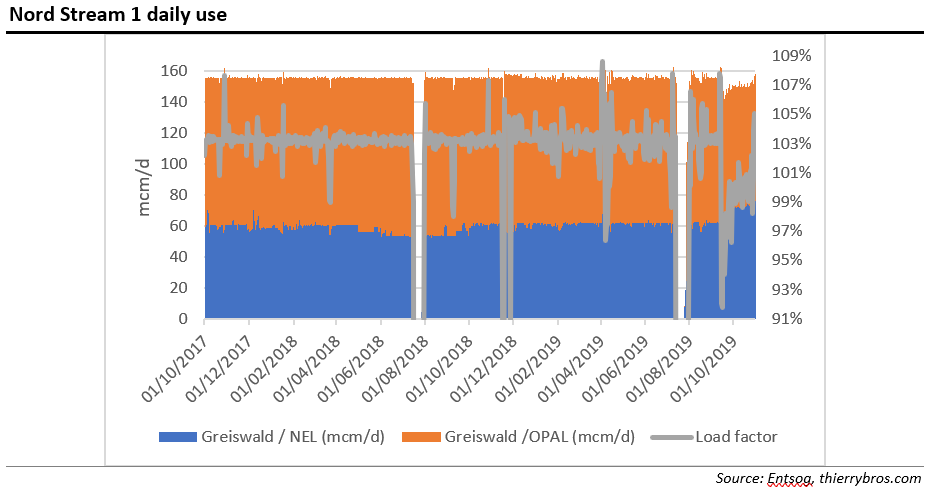 So, technology and astute management of flows have only marginally reduced in practice Nord Stream 1 load factor… This is reflected in the Entsog data where, since 13 September 2019, the actual load factor of Nord Stream 1 is moving up, back nearly to its former full use on a daily basis[1]. This is also reflected in our monthly data with direct flows[2] up 4.5% month on month. We can now expect Nord Stream 1 to continue to operate around 105%, ie only 4 points lower than its former 109% record.

On October 30, the Danish Energy Agency granted a permit to Nord Stream 2 to construct the 147 km section of the pipeline southeast of the Danish island Bornholm in the Baltic Sea. Nord Stream 2 will have to wait another month before starting construction as the Danish law gives parties the option to lodge complaints for up to four weeks after the decision. After the Danish section is completed, the laid pipelines have to be connected to the German sections through a special procedure that can only happen between mid-May and the end of October, due to environmental concerns.[3] This means too late for Nord Stream 2 to be operational in H1 2020. But this Danish approval could tilt the power in favor of Gazprom when negotiating a transit contract with Ukraine... 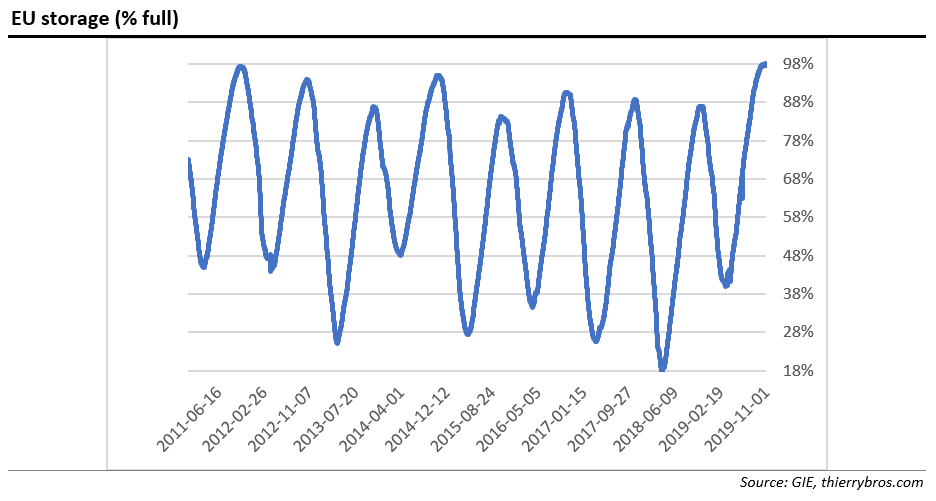 Storage in Europe hit a 98% all-time high on 27 October. The market is therefore ready for whatever could happen in Q1 2020… My scenario is that after an interconnection agreement between Gas Transmission System Operator of Ukraine and Gazprom to be signed in December 2019, Gazprom should be able to nominate day ahead volumes in early January. This short-term transitional solution should sustain gas prices (even with high storage). Then, mid-January, there could be a long-term agreement (ship or pay 600bn m3 over a 20-year contract) with gas prices going down. But Gazprom should push less gas via Ukraine in H1 2020 than in H1 2019, as this would: 1/rebalance the market; 2/ allow Gazprom to push more gas once/if NS2 is operational later in the year. Stay tuned!

[1] Actual daily flows could be above nameplate capacity as annual capacity needs to take into account maintenance periods.