According to Gas Infrastructure Europe, after a new record daily regasification record was set on 4 April 2019, the regas send out was again lower in June. As expected with the return of the Asian premium since mid-April, we’ve seen some decline in LNG arriving into Europe. So far we haven’t seen any producer curtailing production. But if Dutch hub (TTF) prices were to go for an extended period below $3/mn Btu at a time when storage were nearly full, we could see US liquefaction trains and/or Norwegian production curtailed. 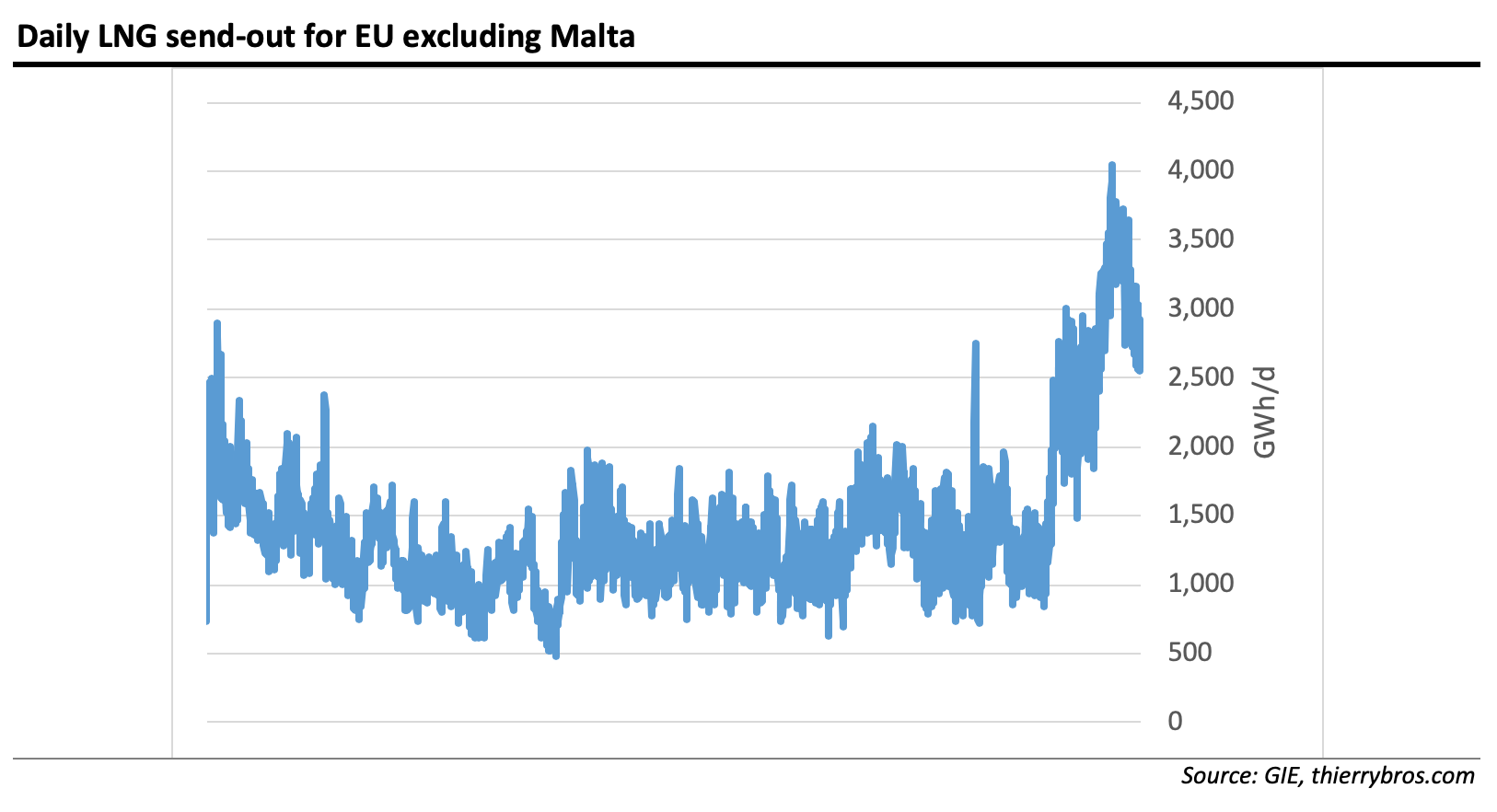 In June, even with less LNG arriving in Europe as it was more profitable to send cargoes into Asia, Gazprom’s flows were down vs last month (-9%) but slightly up vs last year (0.9%). This proves that Gazprom is more interested in balancing the market than in engaging in a costly price war. 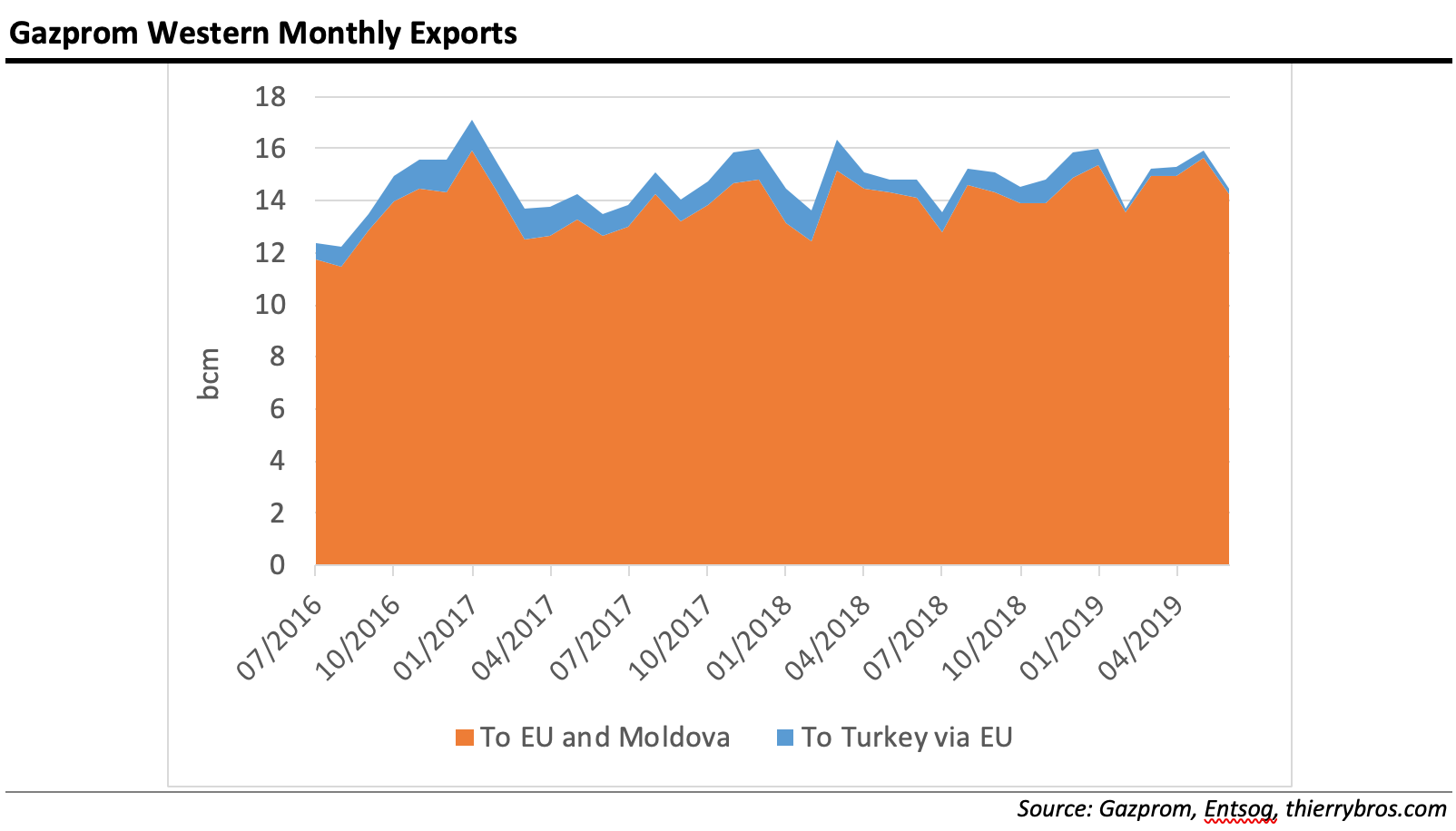 The low transit to Turkey via EU is still on-going as, since February 12, this line has seen very little gas flowing. This can be explained by a severe drop in gas demand in Turkey since last year. According to the latest BP Statistical Review of World Energy, 2018 was a year of very high gas demand (+5.3%) with Turkey experiencing a major drop in consumption (-8.3%)… 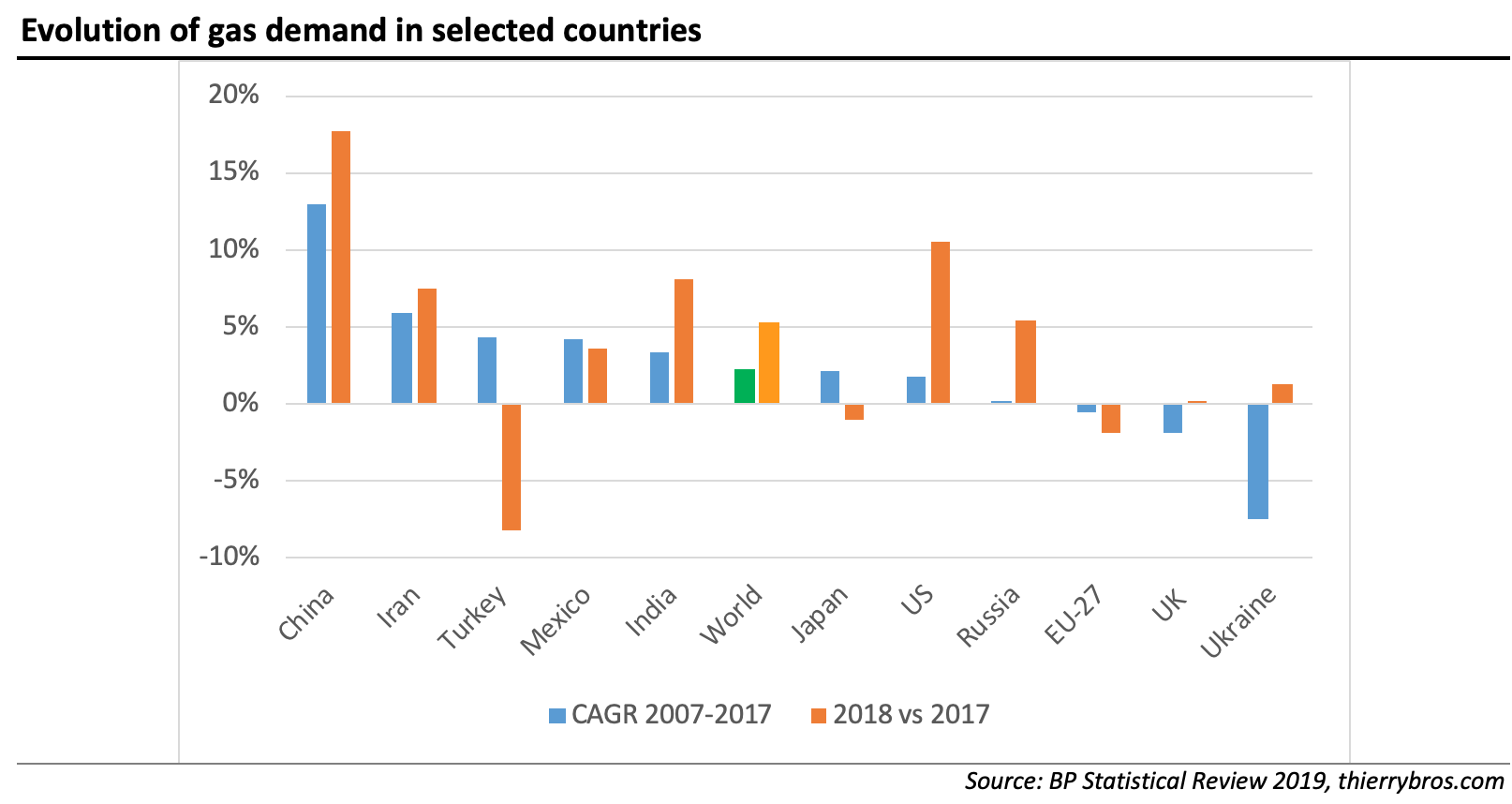 In June, all routes were down. As usual the direct route through Ukraine (-3.6%) was the least affected. 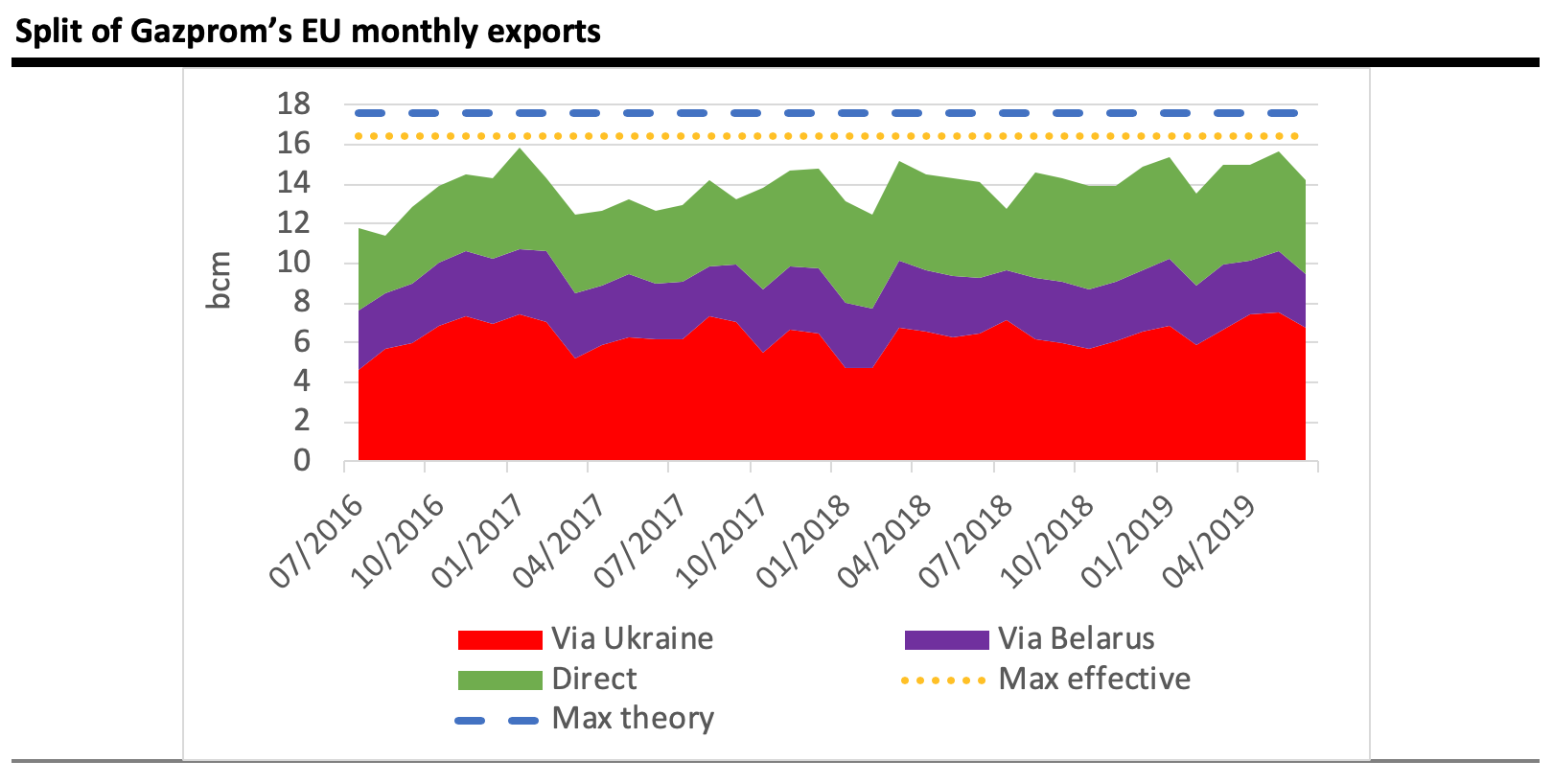 With so much LNG and pipe gas arriving in Europe, injection started early this year and storage should be full to record level ahead of next winter. With 73% full at the end of June, EU-28 storage facilities are as full now as they were at the end of August last year! 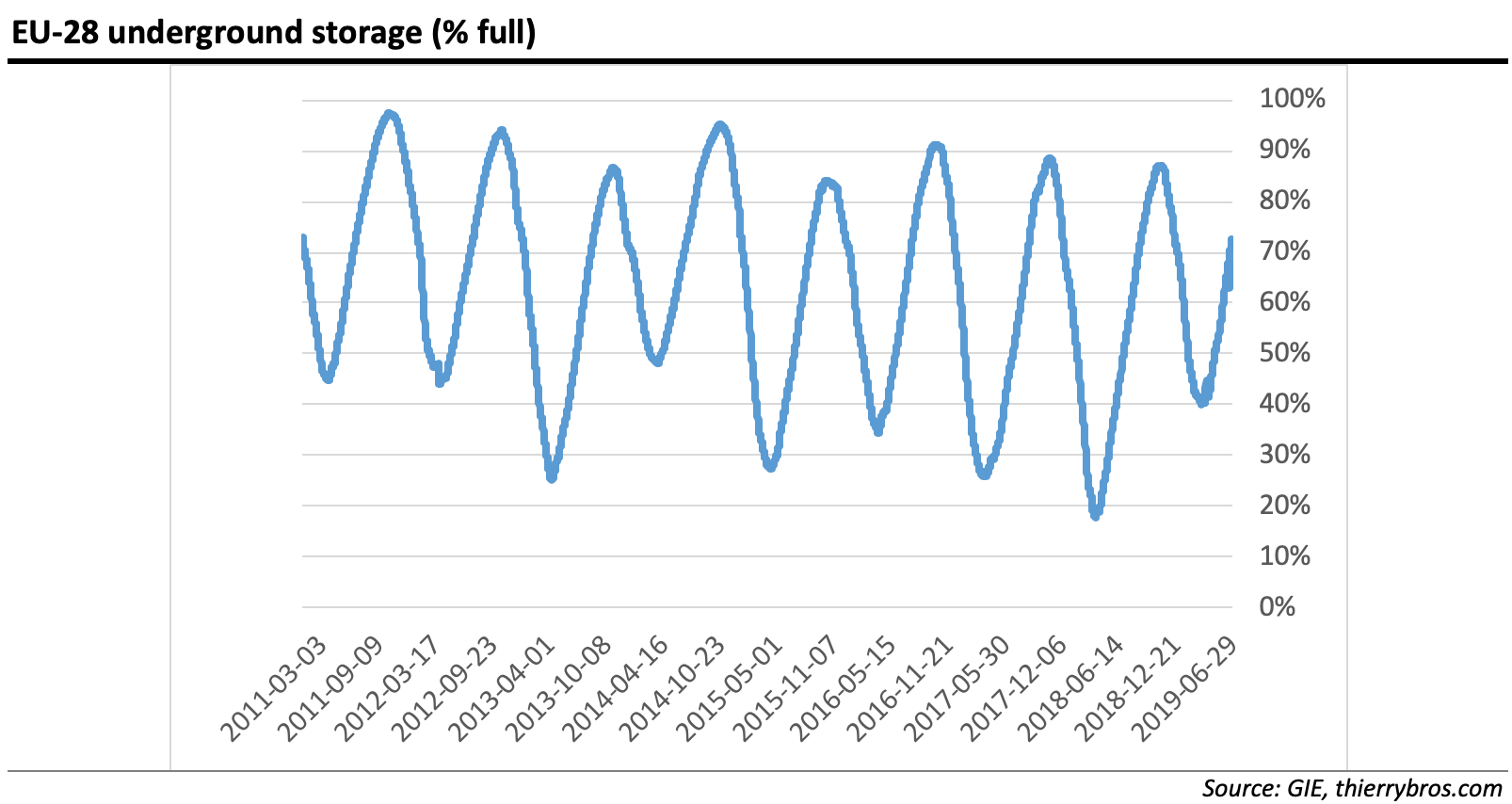 Full storage level and high regasification send outs are the best options to mitigate a no-deal Ukrainian transit risk as Nord Stream 2 will not be operational January 1, 2020. Markets are perfectly working, leaving the next (green) EU energy commissioner to concentrate on more fundamental climate issues.