Russian natural gas giant Gazprom believes that winter 2014/2015 may be “colder than usual”. At least such were the Hydrometcenter forecasts analyzed in Gazprom Management Committee which on the 22 October examined company’s preparation to supply clients in Europe with natural gas.

Gazprom indeed may be getting ready to supply Europe with gas during the coming winter but, in the case of gas contracted by long-term agreements, for a lower price than it would like to. This would happen for the very same principles of oil pegged prices and take-or-pay commitments (on average 85%) that Gazprom was so heatedly advocating all those recent years. The underlying fundamental of the oil-indexed gas prices, crude-oil prices, have already been falling for more than three months. By the end of winter and early spring this fall should be reflected in contracted European gas prices by delivered Gazprom.

Gazprom's activities in the European gas market rely on long-term, usually up to 25 years, contracts with oil-derivatives indexed prices and take-or-pay commitments which usually presume that a customer would pay for the volumes that have not been off-taken over the course of year.

In those pricing formulas, prices of heavy fuel oil and its derivatives, such as diesel and gasoil, and subsequently, prices of crude oil for the previous 6-9 months are taken into account.

That means that the price of one kind of fuel, natural gas, depends on the demand and supply conditions in the petroleum markets of other kinds - with a 6-9 month delay. Moreover, the crude oil prices are being played out in the global market while gas markets are regional at most. That means that the events and factors influencing natural gas prices in Europe sometimes take place on a totally different continent.

Prices in the hub-based natural gas markets, unlike in Gazprom’s oil-pegged contracts, are set closer to the fundamentals of supply and demand in the regions, including the reaction of market players to geopolitical events. In winter gas prices usually rise and during summer they fall. If winter 2014/2015 is indeed colder than usual and unrest in Ukraine continues, possibly threatening the security of gas supply of Europe, prices in most liquid gas trade hubs, such as British NBP, Dutch TTF, Germany's NetConnect or Belgium’s Zeebrugge Hub may skyrocket.

Starting from 2008 because of slackening economic activities due to the global financial crisis and so-called global “gas glut” caused by the US shale gas revolution, hub based gas prices slipped below Gazprom’s contracted gas prices. Major Gazprom’s clients in Europe, such as German E.ON Ruhrgas, German RWE, Italian Edison, French GDF Suez and others, rushed to review the oil-price indexation in their contracts. Attempting to keep the status quo, Gazprom even took some of its clients to court. For example, in 2010, Gazprom Export initiated arbitration proceedings before the ICC International Court of Arbitration in Paris against RWE for the failure to fulfill its “take-or-pay” obligations.

Despite resistance, from 2010 through 2014, Gazprom had to revise its pricing system with many of its major customers and introduced spot price element into the formula. However, such revisions were taking place mostly in the old EU member states and, according to various accounts, by 2013, from half to two-thirds of major European gas consumption were still oil-indexed.

In the meanwhile, new developments appeared in the global oil market. The Brent crude oil prices reached its peak on the 19 June with USD 115.06 per barrel and since then have been falling. By the end of the second week of October it dipped below USD 84 per barrel and currently seems to have somewhat stabilized at around USD 85-86 per barrel, or 25% below its peak in June. 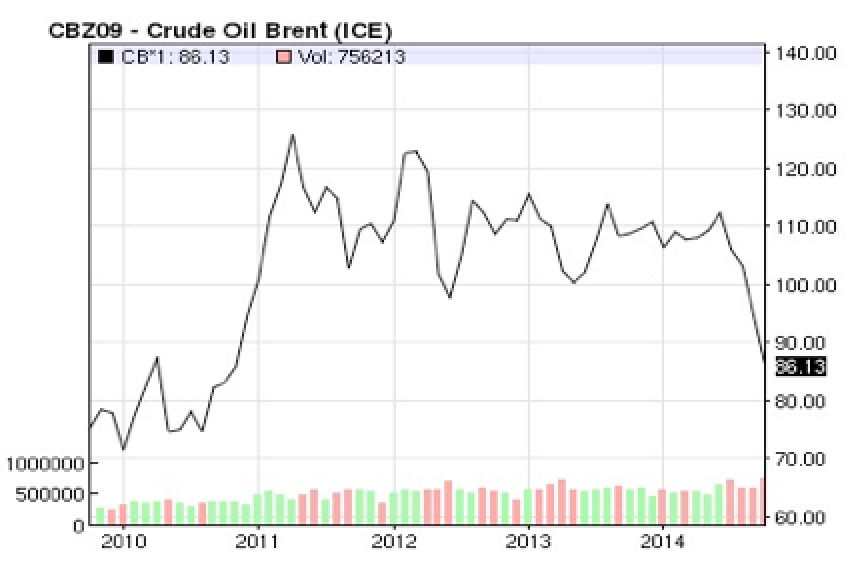 That effectively means that from December 2014, June’s peaked oil prices will begin to be reflected in oil-indexed gas prices for gas delivery bills to Gazprom’s long term customers. It will be especially felt in the newest EU member states – but not for long. The falling oil prices will start to be reflected by January 2015. The level at which crude oil prices stabilized during recent weeks in October, around USD 85-86 per barrel, could be reflected starting from March 2015, still a very cold month in some parts of Europe.

Will long-term contract-based gas prices fall below the hub-based prices this winter? It depends on the geopolitical situation in Ukraine, the winter temperature and the USD/EUR exchange rate. Besides that, every particular occasion will depend on contracted prices for a particular client of Gazprom and particular trading hubs that we would compare.

In those countries where Gazprom’s clients successfully negotiated the inclusion of a spot price element, the falling crude oil prices will be transposed to a lesser extent. Currently almost every single EU member state except for maybe Latvia or Bulgaria, have a gas trading platform but only more liquid ones in Western Europe would react to weather conditions and the geopolitical situation more fully.

Even if the relative positions of the contracted and traded gas prices are difficult to predict, the direction of Gazprom’s oil indexed prices by the end of the winter 2015 is clear – downwards.

Vija Pakalkaite is a PhD student at the Doctoral School of Political Science, Public Policy and International Relations, Central European University, and a researcher at CEU Energy Policy Research Group (energy.ceu.hu). Vija‘s main research interests are energy policy, security of supply and competitiveness, especially in the natural gas markets of the European Union.

Gazprom decides against dividend for first time since 1998