Gazprom Exports up on Higher Transit

The court’s ruling means Gazprom is now restricted to 65mn m³/d, the volume it was allowed under a 2009 decision exempting it from EU internal energy market rules approved by the EC and the German regulator. This is a clear win for Poland, Latvia and Lithuania against the EC and Germany as the court recognised that the 2016 decision was taken disregarding the solidarity principle.

The court applied the article 194 of the Treaty on the Functioning of the European Union in a much broader way than EU energy directives that rely on a solidarity mechanism only for extraordinary situations. On September 13, the German federal network agency finally ordered the operator of Opal and Gazprom to implement this EU court decision or face fines.… 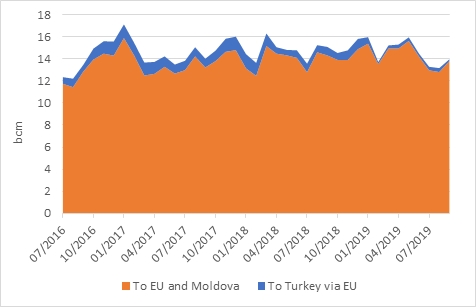 After low transit to Turkey via EU since February, transit completely stopped September 17. 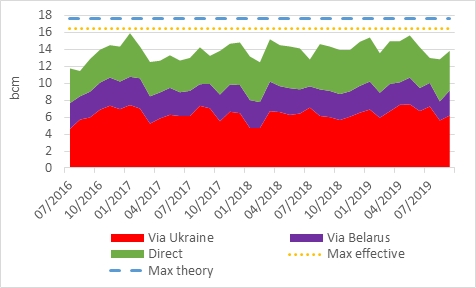 This means that Nord Stream 1 is now limited to 127mn m³/d out of a total 151mn m³/d or 84% on an annual level. This is reflected in the actual data with direct flows down 5.9% month on month while transit via Belarus and Ukraine has gone up by respectively 31.2% and 10.6%. As the Opal decision was implemented in mid-September, we can expect this trend (lower direct flows and more transit) to continue in October.