On December 2, Gazprom commenced gas pipeline supplies to China[1]. This major infrastructure project was delivered on time with using solely Russian service and technology. Even if the ramp up is supposed to be gradual to 38bn m³/y in 2025, I would expect Gazprom to be flexible enough to meet the Chinese requirements if domestic gas demand growth were to re-accelerate above the actual 10%/year.

Those Russian exports are outside this monthly analysis, but we must keep in mind that they provide not only a new additional revenue flow to Gazprom but also the ability to impact global gas markets. With Power of Siberia, Gazprom moves into a new league: the biggest gas producer is becoming a worldwide actor despite having very little LNG production. We can safely assume that Gazprom’s target to reach 13% market share in China by 2035 is going to be successful.

On 8 January 2020, TurkStream[2] was formally inaugurated and should allow Gazprom to reduce Ukrainian transit flows by 15bn m³/y from this year. TurkStream 2 to the Balkans is delayed but we can expect it to be fully operational from 2025. Gazprom’s target is to maintain its European market share, that should stay around 35%+ in the 2018-2035 period. Hence once fully operational, TurkStream and Nord Stream 2 provide the option for Russia to get rid of the Ukrainian transit.

With the laying of the Nord Stream 2 now suspended since 21 December[3], it is now very difficult to even assume when the building of Nord Stream 2 will effectively be finished… Failure to start Nord Stream 2 on 1 January 2020 pushed Gazprom into sign a transit deal on 29 December. But the Nord Stream 2 saga is still unfolding and could have impact on Ukrainian transit post 2021. Gazprom’s flows were up both vs November and vs last year. 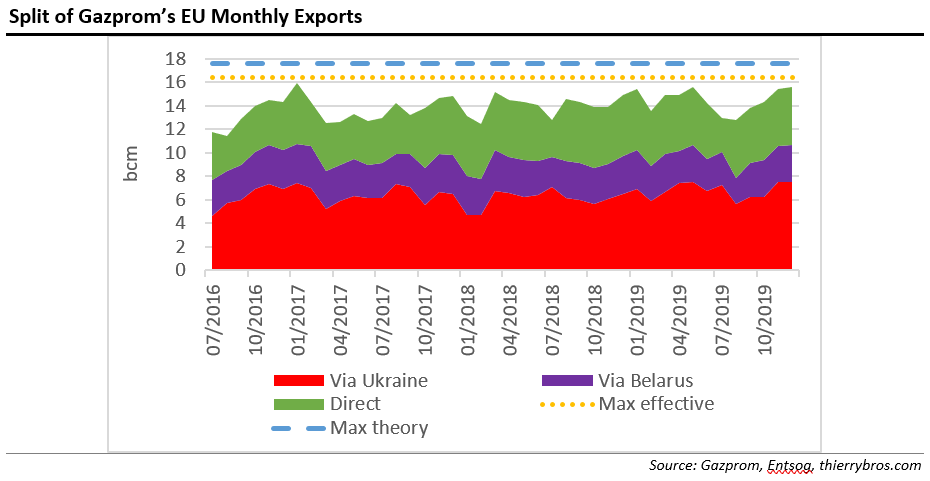 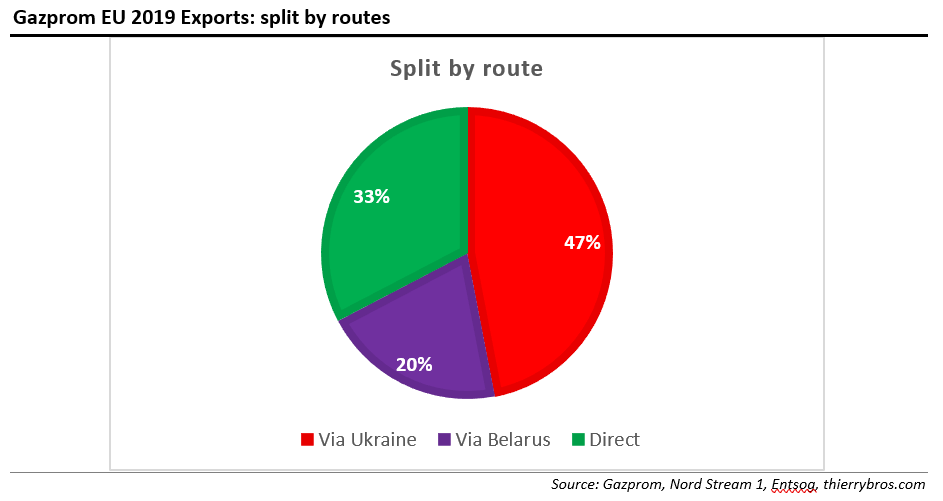 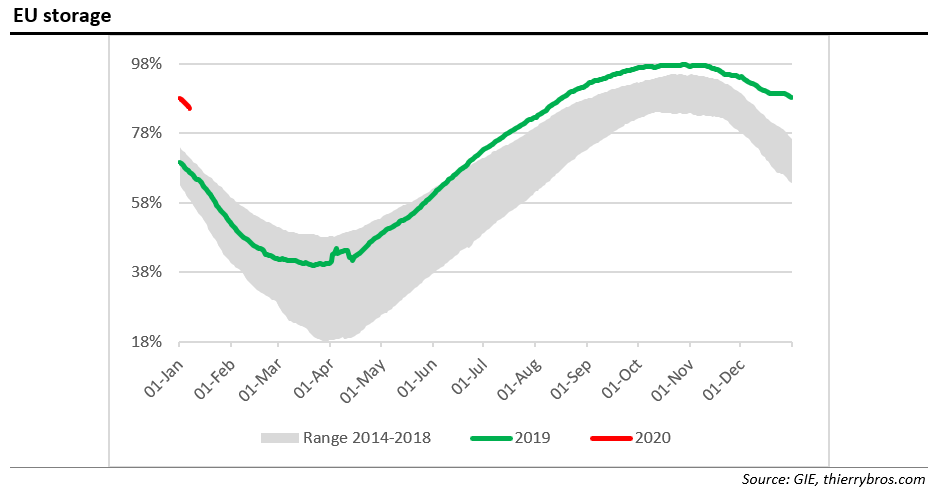 If we assume that Gazprom will transit via Ukraine exactly the set amount stipulated in the contract ie 65bn m³ in 2020, Gazprom would under our assumptions witness a drop in European exports of 7bn m³ in 2020 vs 2019.

We could also expect less LNG to reach Europe… Gazprom is in the driving seat to rebalance the EU system, but the path is narrow as it needs to fine tune its own exports and the EU price to reduce LNG arrivals while staying profitable to provide the economic benefit the Russian state is expecting… The 65bn m³ to transit in Ukraine gives us a good idea of Gazprom’s thinking for 2020: Gazprom is prepared to reduce slightly its exports but not to take all the pain. This means that other suppliers will have to do the same, either proactively or following a market signal (ie lower prices).

Finally, the 7bn m³ less exports in 2020 could not directly translate into lower sales this year than last. If we assume that Gazprom had “at least 11.39bn m³ in Europe”[7] gas in storage and a proprietary capacity of 4.8bn m³, this means that Gazprom had filled an extra 6.6bn m³ in 2019, that it does not have to fill in 2020. This scenario means the same level of sales in 2020 vs 2019 with less transit but more withdrawal. This is exactly what the January Gazprom accounts should show: less exports but same level of sales, thanks for the withdrawal of gas injected in 2019.

Given the transit deal was signed December 29, allowing Gazprom to benefit from the price risk premium until the last minute, transit via Ukraine to Slovakia shows an unexpected collapse this year. This could be a way for Gazprom to: 1/rebalance the market by withdrawing more gas from its storage and 2/test the limit of the Ukrainian grid. Further, with only 40bn m³/y transit for 2021 to 2024 and Nord Stream 2 likely not operational by 2021, the market will need to refill storage to the max again in December 2020, so a tightening the market now makes sense. It could also demonstrate that Gazprom will not transit more than the agreed minimum volume via Ukraine and hence the need to have Nord Stream 2 operational by 2021…

As for the transit fee Naftogaz said it “could not announce the tariff rate outlined in the contract between Naftogaz and Gazprom because of the condition of confidentiality, but it almost did not change in accordance with the current year (in October 2019, Naftogaz predicted that the transit tariff for the Russian gas in 2019 will be $2.61/’000 m³/’00 km).”[8] For the 225bn m³ minimum transit volumes fixed in the contract for five years, the total revenues is $7.2bn (or $32m/bn m³)[9].

“Gazprom is in a position to deploy a strategy designed to create uncertainty about the price of natural gas, rather than simply starting a price war” as was perfectly defined by my friends Catherine Locatelli and Sadek Boussena in a 2017 visionary paper[10]. In a fully liberalised market, the lower cost provider has always more market power. By deciding to send very low volumes via Ukraine in early January when the market was then expecting a business as usual scenario, Gazprom proved its ability to create uncertainty. Traders now have to live with this new uncertainty!

[2] https://www.gazprom.com/press/news/2020/january/article497324/?from=mail even if, as expected, TurkStream onshore section 1 dedicated to Turkey alone has already begun to flow gas earlier this week

[4] Data for EU only from Gazprom and Entsog. The press is often mentioning Gazprom exports down in 2019 vs 2018 but this is for EU and Turkey. This growth can also be explained by the high level of gas put in storage.

[8] https://www.naftogaz-europe.com/article/en/basisforcalculatingtariffsbetweennaftogazgazprom this is very close to the below 2€/1,000 cubic meters /100 km for shorter Nord Stream disclosed by Nord Stream 2

[9] With an assumption of 1,240km for the transit distance in Ukraine.