The energy transition to decarbonise the EU’s economy fully by 2050 will be felt economically in all member states. An illustrative example of this is that even before the start of this transition, the announcement of a green tax on fuel in France has already evoked a wave of protest from the yellow vest movement. Clearly, it is important to decarbonise the EU’s economy at the lowest possible cost. These costs can be substantially lowered through producing hydrogen by gasification of biomass and coal in combination with CO2 capture and storage.

The current transition model in Europe focuses primarily on stimulating wind energy. The fluctuating supply of wind energy entails extra costs via extra investments in network capacity and backup power when wind is absent. On the other hand, the surplus of wind turbines can be used outside the electricity peak, whenever it is windy, to produce hydrogen by ‘free’ wind without carbon emissions.

Whilst the European Commission stated that hydrogen is useful for energy transition in several transport applications (EC 2018), the climate bill can be further reduced by large-scale use of hydrogen through the gasification of biomass or coal in combination with CO2 storage. The use of hydrogen does not lead to air pollution or carbon emissions and, in addition to transport applications, it can secure supply in a flexible power plant as well as being used in all kinds of processes in industry – even in heating installations as a replacement for natural gas. The negative emissions of biomass gasification with CO2 storage can also increase the emissions budget of other sectors, thus enabling us to postpone or avoid more expensive measures such as energy-neutral buildings.

Moreover, coal gasification with CO2 storage has so much hydrogen potential that it eliminates the need to expand expensive nuclear power plants while at the same time providing clean fuel for other applications.

Figure 1 illustrates two alternative transition models to electrolysis via wind energy. In one model, biomass can be used for gasification to produce hydrogen while, in the second alternative, it is also possible to opt for coal gasification. Hydrogen is a clean fuel, and hydrogen production through gasification can also be clean as long as the CO2 produced during the gasification process is captured and stored under the North Sea.

Model simulations of the energy transition

We calculate the effects on the energy price of the various transition scenarios using a global climate-energy economic model, the Model for Evaluating Regional and Global Impacts of the Greenhouse Gas Effect (MERGE) (Aalbers and Bollen 2017a, Blanford et al. 2015), which distinguishes between the most important regions, including Europe. MERGE calculates the energy consumption and supply of coal, oil, and gas, the associated CO2 emissions, the prices of fossil energy, and the use of options and costs to counter greenhouse gas emissions up to 2100.

To analyse the effect of different transition models on the climate bill, the following scenarios with different ways to produce hydrogen are examined:

1. An ‘wind only’ scenario, where hydrogen is produced only via electrolysis from wind-energy

3. A ‘+grey’ scenario, which, in addition to scenario 2, also produces hydrogen from gasification of natural gas or coal gasification with carbon capture storage. 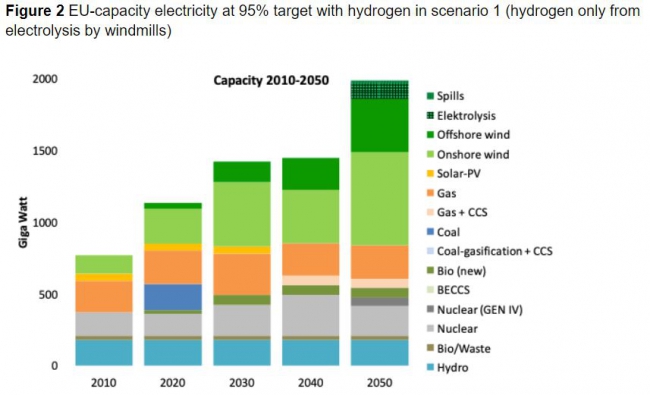 Next to the rise in the carbon price, the price of electricity will more than double to €120/MWh in 2050. The increase in the wholesale price is due to the expansion costs of the network, which must be able to absorb the high peaks of large capacities of wind power in 2050 (60%). However, investments are also required in clean but expensive nuclear baseload technology (replacement and expansion). In off-peak periods when there is an ‘overcapacity’ of wind energy, the wind turbines switch from electricity production to green hydrogen production via electrolysis or they are turned off (‘spills’).

Because wind energy provides a volatile supply of electricity, this transition model also requires a number of relatively expensive options that guarantee the security of supply. This involves, on the one hand, full-time operation of biomass or nuclear power plants (relatively expensive) and, on the other hand, the use of flexible gas-fired power plants that operate part-time. In 2050, the capacity of gas in Europe will be approximately 220 gigawatts (share is around 15%). The capacity of biomass power plants rises to 70 gigawatts (4% share) while nuclear expands to 270 gigawatts (13% share). The current coal-fired power stations will be phased out before 2030 because of the high CO2 price in 2030.

The rising prices of electricity and CO2 lead to adjustments in the European economy, resulting in 2050 in a 2.3% reduction of GDP, compared to a scenario without climate policy. Similarly, if we compare the full GDP trajectories of the two scenarios, we see that the net present value of the GDP losses is equal to 0.5%, or €8,000 per person in Europe.

In this transition model, we expand the palette of clean energy production options with biomass gasification plus carbon capture storage (BECCS). The climate bill will decrease because the negative emissions of BECCS enable a smart reallocation of sectoral emissions. If the emissions from the electricity sector go down and those from other sectors go up, the more expensive measures such as energy-neutral homes or buildings can be avoided. The CO2 price in 2050 is lower than in scenario 1: almost €200/tCO2 instead of €350/tCO2. 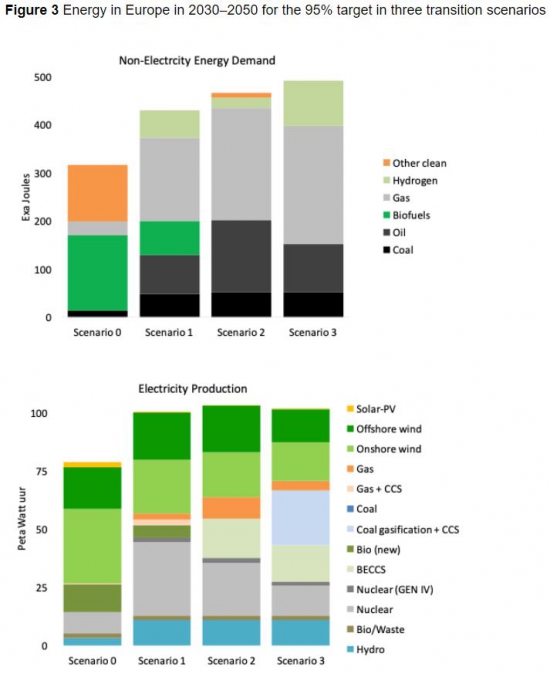 We also see the reallocation of emissions in the changes in energy demand and production. Figure 3 shows the demand for energy (top panel, per energy carrier) and energy consumption in the electricity sector (bottom panel, per technology) for all three scenarios for 2030–2050. The expanded carbon budget is filled with cheap oil and gas, while expensive biofuels become redundant.

BECCS also reduces the climate bill by expanding the range of clean electricity options. The question is how important that is. The bottom panel of Figure 3 shows that the production share of wind energy decreases slightly. Although the investment costs of wind turbines are half of BECCS, the relatively expensive BECCS in this scenario reduces the average electricity price because BECCS displaces nuclear energy (of which investment costs are 30% to 165% higher than BECCS). As a result, the electricity price in 2050 will be €110/MWh instead of €120/MWh in scenario 1.

With this scenario, the climate bill is further reduced because the electricity supply is diversified and more expensive measures possibly avoided, such as building energy-neutral buildings or installing heat pumps in existing buildings. Figure 3 illustrates these shifts. Hydrogen becomes more important, which is driven by the increase of hydrogen for electricity production by ‘coal-gasification + carbon capture storage’.

More importantly, coal gasification with carbon capture storage produces so much hydrogen that, in addition to its use in hydrogen plants, it can also be used for heating or transport (overall demand for fossil fuels decreases because oil demand drops strongly and gas demand rises slightly. See left panel, Figure 3). As such, overall CO2 emissions fall and the carbon price drops by almost 20%.

The average energy price drops by 33% because the extra hydrogen from coal gasification with carbon capture storage is cheaper than the hydrogen from BECCS and wind energy in scenario 2. Expensive measures such as CO2-neutral living become redundant again (the category ‘other clean’ disappears in Figure 3).

Wind energy also exists in scenario 3. Over time there will be extra capacity, but it will expand at a lower rate than in scenario 1.

Hydrogen from electrolysis only exists in the more expensive transition models with very large production shares of wind energy. Gasification leads to a broader and more evenly distributed electricity portfolio. Coal gasification with carbon capture storage makes climate policy 20% cheaper again. The climate bill then drops to €4,900 per European, or a GDP loss in 2050 of 1.4% instead of 2.3% in scenario 1.

Offshore wind energy now has a business case, because this technology is and was stimulated with subsidies. However, it offers no support for gasification with CO2 storage, the distribution of hydrogen, and hydrogen applications.

The business case for gasification is held back by several policy choices. It lacks government subsidies, it lacks a high emissions trading system price and the emissions trading system directive does not grant negative emissions of BECCS (Aalbers and Bollen 2017b). If we now start upscaling of gasification with CO2 storage, it will be easier/cheaper to scale it up further in the future. A positive business case for gasification with carbon capture storage renders more expensive climate measures obsolete and lowers the climate bill substantially.

From the editor: The future of gas is blue [GasTransitions]