Gas to remain staple in Europe even in net-zero future: study [Gas in Transition]

A “holistic” and “detailed” study undertaken by research centres IFPEN (France) and SINTEF (Norway), led by Deloitte France and sponsored by the oil and gas industry, concludes that the European energy system will need similar amounts of natural gas for primary energy in a feasible net-zero future as it does today. According to energy expert Ralf Dickel, the study shows that large scale carbon capture and storage (CCS) is indispensable. “But what surprised me,” he adds, “is that to ensure sufficient dispatchable power, gas-fired power generation with post-combustion CCS turns out to be the sensible option.” 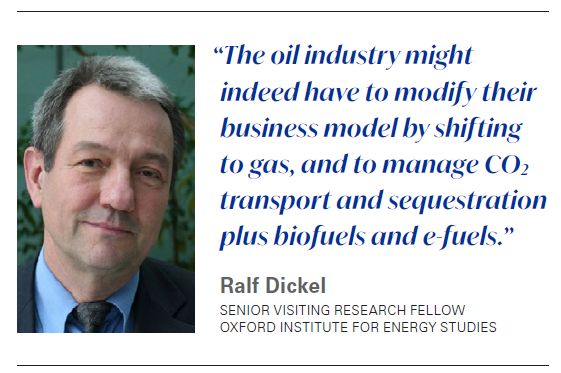 Gas remains “an element of continuity in the energy mix” in the EU, even in a net-zero emission future, according to the study commissioned by the Hydrogen4EU consortium. The study group included BP, ConocoPhillips, Equinor, Shell, TotalEnergies, Wintershall Dea, Eni and ExxonMobil, as well as industry associations IOGP, Concawe, Zukunft Gas and Hydrogen Europe.

The study, Charting Pathways to Enable Net-Zero, relies on “a detailed model-based analysis with a full representation of the European energy system and its transition from 2020 to 2050”. According to the authors, it is “among the first to consider explicitly the latest European targets (the 55% CO2 emissions reduction by 2030 and climate neutrality by 2050).”

An element of continuity

In their Technology Diversification pathway, the researchers look at a scenario that harnesses a wide range of decarbonisation technologies, and conclude that it is a cost optimal means of reaching the net-zero target. Contrary to other scenarios, this one does not look at a given instrument mix leading to the EU’s emissions targets. Instead, it starts with the targets and derives the instrument mix by cost optimisation. 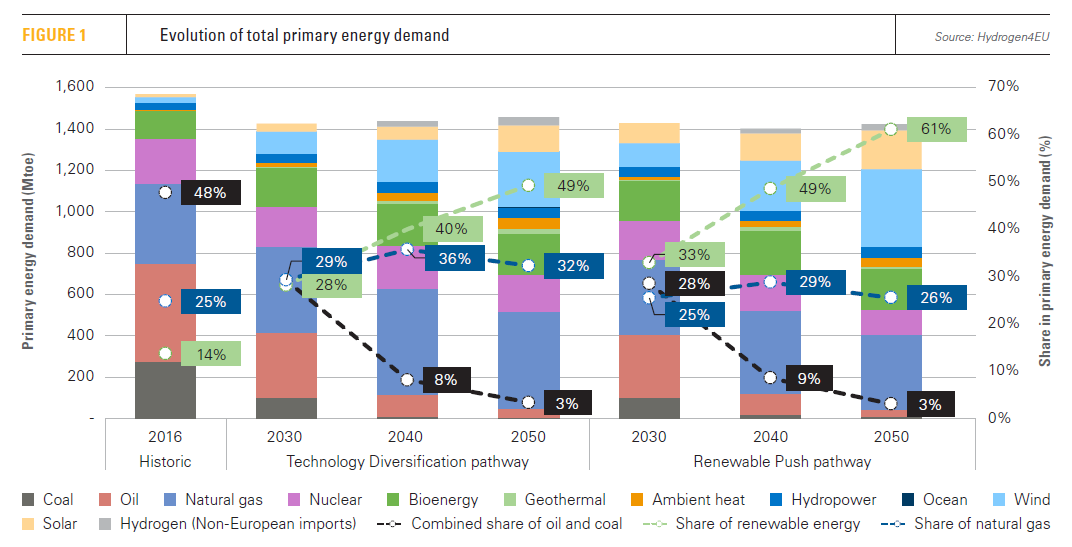 In contrast, the study’s Renewable Push scenario is defined by deliberately setting more ambitious targets for the share of renewables in final energy consumption: 60% in 2040 and 80% in 2050. Interestingly, even in this scenario natural gas remains “an element of continuity in the energy mix,” as shown in Figure 1.

Oil drops out almost completely, as it is reduced to just 3% of the energy mix in both scenarios. “Negative emissions” from biomass and direct air capture with CCS serve to offset residual emissions from hard-to-abate sectors.

Continued use of gas for power generation “unavoidable”

As for hydrogen, this plays a major role in both pathways, as can be seen in Figure 2. 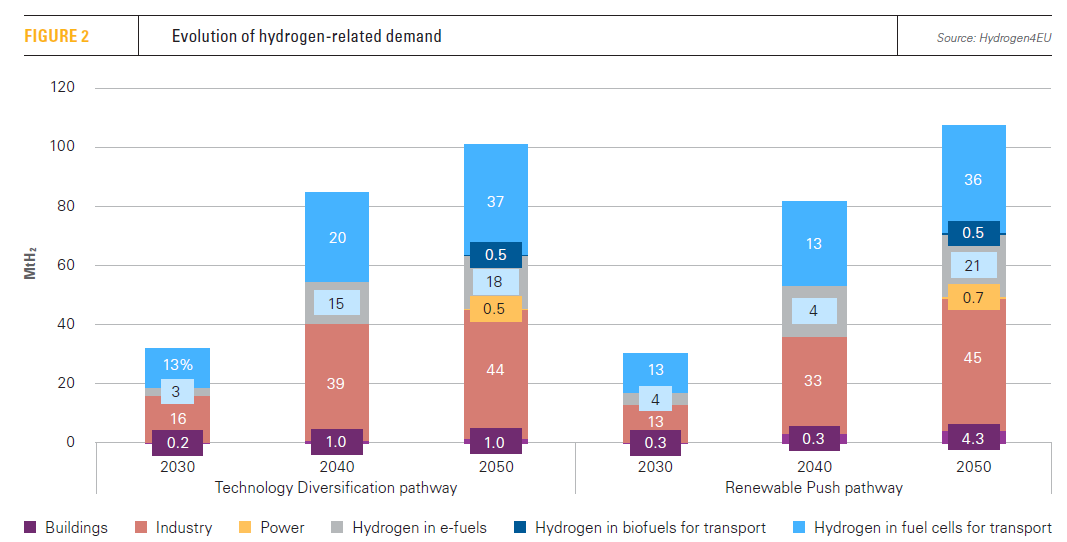 What is interesting to note is that hydrogen will be important particularly in industry and transport, but not in the building sector or power generation. This is ascribed to “trade-offs between a wide range of available options to decarbonise those sectors such as biogas, direct renewables, heat pumps – and continued use of natural gas.”

Ralf Dickel, a senior visiting research fellow at the Oxford Institute for Energy Studies (OIES) who formerly worked for the Energy Charter Secretariat, the International Energy Agency (IEA), the World Bank and German gas company Ruhrgas and who was involved in the steering committee of the study as advisor for Zukunft Gas, says he was surprised by the results of the study with regard to power generation. “What the researchers found is that it is practically unavoidable to continue to use gas in power generation for load balancing and decarbonise it post-combustion.”

The need for dispatchable power generation is unquestionable, according to Dickel. “At the end of the day you need at least 20% of dispatchable power generation. These are quite large volumes. The potential of hydropower is limited due to geography. You can use a certain amount of nuclear power also. But load following will have to be supplied predominantly through gas-fired power.”

The main reason why gas-fired power with post-combustion CCS comes out better than hydrogen-based power generation is that “the infrastructure for gas is already there,” says Dickel. “You only need to add CCS at the end of the power plant. If you want to decarbonise power generation with blue hydrogen, you first need to produce large amounts of blue hydrogen and you need a new hydrogen transport infrastructure and to adapt the turbines to run on hydrogen. That’s possible, but it adds costs, more technical uncertainty and not least complexities.”

Converting gas pipeline systems to run on hydrogen is not a simple task, notes Dickel. Hydrogen has only about 30% of the net calorific value of methane, but it flows about three times faster so that – everything being equal – the energy transport capacity of a pipeline transporting hydrogen instead of methane is only slightly lower (about 15%). “One challenge is that you need to ramp up compression considerably in line with the volume throughput. For example, if you wanted to convert the first Nord Stream twin pipeline to run on hydrogen, you need to triple the compression drive capacity in Portovaya from the current 350 MW to more than 1,000 MW.” The Hydrogen4EU study sees only a limited potential for imported hydrogen of between 10 and 15% of overall supply.

According to Dickel, it may make sense to build hydrogen pipeline systems in a small country like the Netherlands or in northern England, but in a large country like Germany, “you will have tremendous configuration problems, not least because Germany is a large transit country.” Even more problematic is the idea of building a hydrogen pipeline from Spain through France to Germany. “France does not rely much on hydrogen in its own energy plans. There will be no market there.”

According to Dickel, a hydrogen backbone only becomes feasible when there is a well-functioning hydrogen market in place, which is not likely to happen any time soon, as it is not clear how the extra costs for producing hydrogen will be paid for. “Hydrogen can be produced locally based on a functioning EU electricity and gas market. What do you gain by transporting it and selling it elsewhere? There is no demand for this currently.”

A different case for gas than oil

But whichever solution is chosen – whether it is natural gas with post-combustion CCS or hydrogen – there is no question that substantial volumes of CCS will be indispensable to meet net zero, says Dickel. “That is a solid outcome of the report.”

There is no way that Europe could produce enough renewable energy by 2050 to make a net-zero energy system possible without CCS, according to Dickel. That is even true in the Renewable Push pathway in the study (Figure 3). 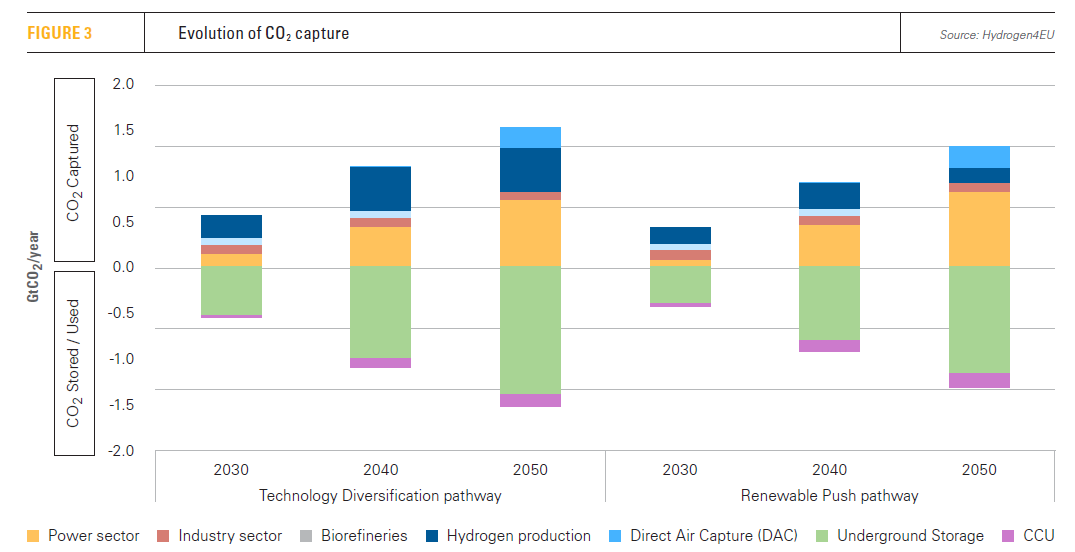 Even though both pathways rely strongly on CCS, there is one big difference between them: investment in the Renewable Push pathway is €2 trillion ($2.4 trillion) higher than in the Technology Diversification Pathway. In terms of total energy system costs, the Technology Diversification pathway would help save more than €70bn/year on average for 30 years, according to the study.

In view of the continued need for natural gas in the European energy system, what does Dickel think of the IEA’s recent Net Zero by 2050 roadmap, in which the agency calls for an immediate end to investments in new oil and gas projects?

“I believe the IEA net zero roadmap is a necessary wake-up call to policymakers and the industry,” he says. “Given the need – and an increasing political will – to drastically reduce CO2 emissions in this decade the main instruments are first of all replacing almost completely coal-fired power by renewable power generation by 2030 but also reducing substantially CO2 emissions from transport and reducing demand for oil correspondingly by more than 25%, which will make the need for further exploration for oil obsolete. This is very much in line with the Hydrogen4EU study which also sees a drastic decline on oil consumption.”

However, “the case for gas looks different”, he adds, “because gas can contribute to decarbonisation immediately by switching from coal to gas while renewables are rolled out and by decarbonised hydrogen for all segments and by gas fired power with CCUS. The oil industry might indeed have to modify their business model by shifting to gas, and to manage CO2 transport and sequestration plus biofuels and e-fuels. This will need support by politics by putting a price on CO2 abatement, which allows earning a reasonable profit. I do not see why this should not be workable to the benefit of all.”