Written in collaboration with Accenture Strategy and the Paul Scherrer Institute, the World Energy Council’s World Energy Scenarios 2019 provides an inclusive and strategic framework that enables big-picture thinking. The report describes life under three scenarios, “designed to be used as a set to explore and navigate what might happen and support a better-quality global strategic dialogue on the future of energy systems.” 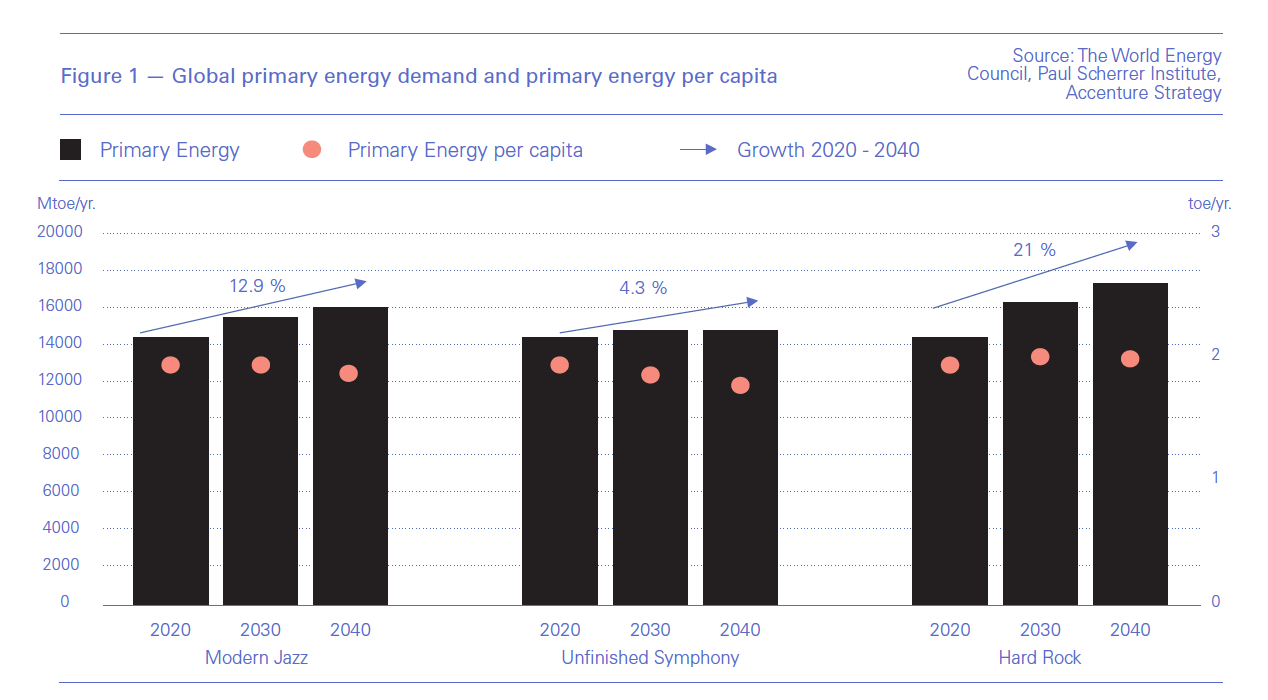 Introducing the report, Christoph Frei, the head of the WEC, said that in the journey of energy transition, “we have entered a new energy era, which promises clean energy abundance and the benefits of sustainable energy for all. It is a promise that still needs to be met.

These scenarios are a tool to help guide leadership decisions through rapidly changing energy realities and a platform to realise the importance and benefits of a collaborative approach.”

WEC says that the world has entered the age of disruptions. Technological innovations, climate change and geopolitical tensions are reshaping the world of energy. The WES provides a tool for assessing these major uncertainties, based on three scenarios:

Since WES 2016, the world has experienced three years of comparatively high energy demand and a marked acceleration in renewable energy developments, but also increased carbon emissions. In addition, trade wars are further straining the multilateral system and impacting global trade, it says.

However, what has changed most is the speed and volatility of changes and unevenness of impacts. Fragmentation and polarisation of leadership and poor economic returns, which limit investments, are emerging as some of the biggest risks to energy transition. Also the speed of innovation, and the disruption it causes, is having a strong impact on the energy sector.

The key energy implications resulting from the WES are:

Interestingly, the WES report concludes that the Hard Rock scenario is no longer seen as an extreme scenario. But the world is becoming more divided and the outlook for effective global co-operation, which is assumed in the Unfinished Symphony scenario, is receding. The Modern Jazz scenario is the most likely, while raising a lot of questions about increasing inequality, active consumers and effective market design. 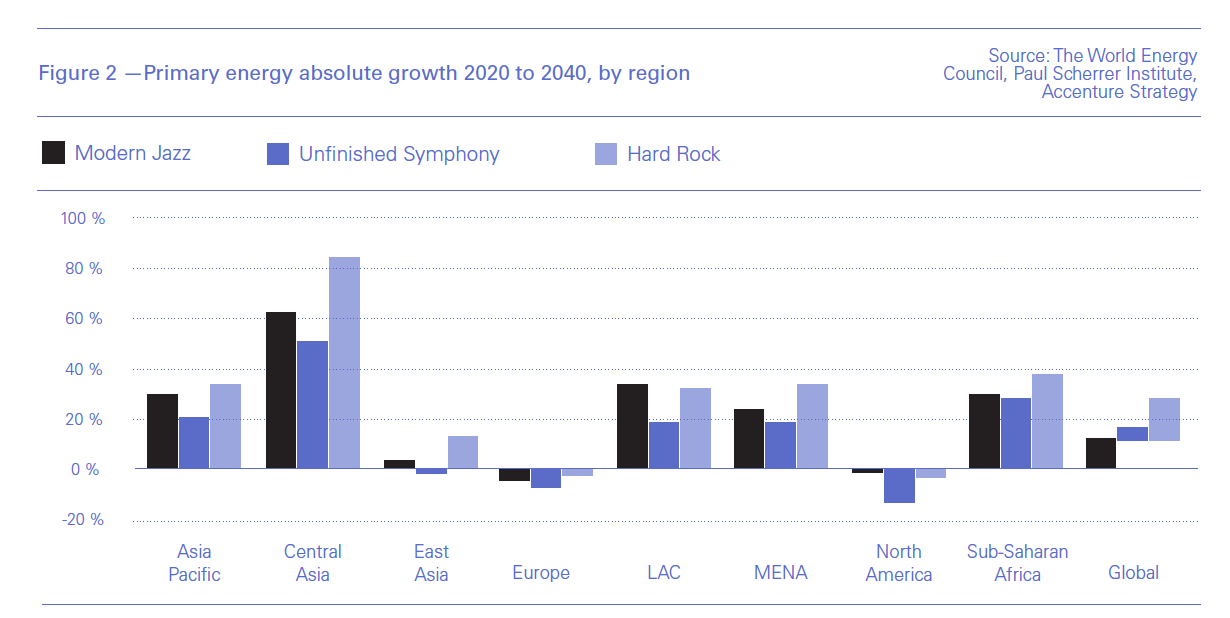 But in all scenarios – in spite of strong multilateral policies and co-operation efforts – it seems clear that the world will fail to achieve the 2 °C Paris Agreement target. This means that, in addition to addressing what needs to be done to keep temperature increases below 2 °C, more mitigation and adaptation may be needed to make the world more resilient as the effects of climate change are likely to be felt even more strongly over the coming decades.

The report makes recommendations for business leaders, policy makers and international community to avoid complacency and fragmented action, to address challenges and to intensify collaborative innovation.

Global primary energy demand is expected to grow in the period to 2040, but the growth rate it is highly dependent on the scenario (Figure 1). In accordance to the Modern Jazz scenario, driven by markets and innovative systems, a 13% growth in demand is forecast over the period to 2040. 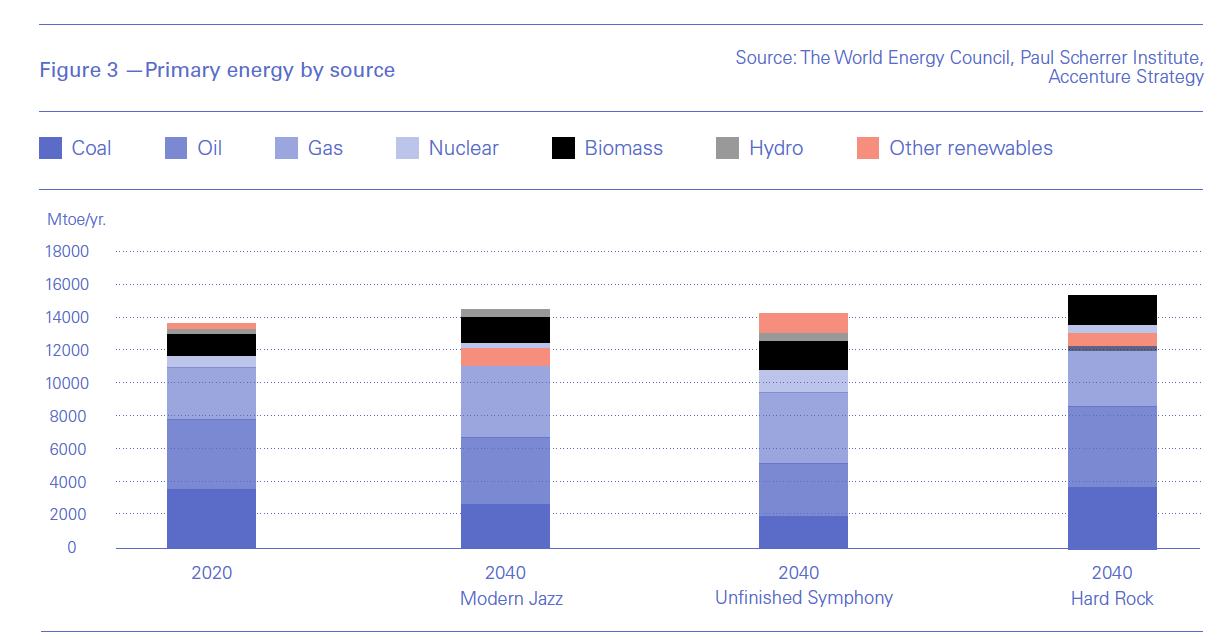 According to WES, the growth in primary energy demand would have been significantly higher but for efficiency gains and particularly advanced digital solutions. Their combined impact is weakening the historical relationship between economic growth and primary energy demand.

Not surprisingly, most growth is forecast to be in Asia for all scenarios (Figure 2). Interestingly though, east Asia, which includes China, succeeds in bringing primary energy demand growth under control, while central Asia, which includes India, is the largest driver of growth.

Fossil fuels continue to meet more than two-thirds of primary energy demand across all three scenarios (Figure 3). In real terms oil and coal decline in Modern Jazz, with oil demand expected to peak between 2025 and 2030. Under the combined effects of policies and technologies, demand for coal is forecast to peak in the early 2020s. Nuclear continues to play a role under all scenarios.

However, gas increases in real terms under all scenarios – in part replacing coal – with the strongest growth in Modern Jazz. Key factors contributing to this are its low cost and high availability.

Oil and gas will prove resilient thanks to falling production costs, demand growth in petrochemicals, and rising demand in not-yet-electrified and non-electrified, hard-to-abate, sectors – in particular, aviation, freight and energy-intensive construction materials.

The good news is that the dramatic decline in the costs of solar energy coupled with abundance of natural gas and LNG is challenging the economics of coal in many countries and the role of oil in energy security. With the growing global demand for energy, gas demand stays steady beyond 2040.

This abundance of gas keeps prices low, securing LNG exports to Europe and Asia in what is becoming a global, commoditised, LNG market.

Demand for electricity continues to grow as heating, manufacturing and mobility move to electric power (Figure 4). Under Modern Jazz, the share of electricity in final energy consumption grows to 28% by 2040, in comparison to a 19% share in 2018. 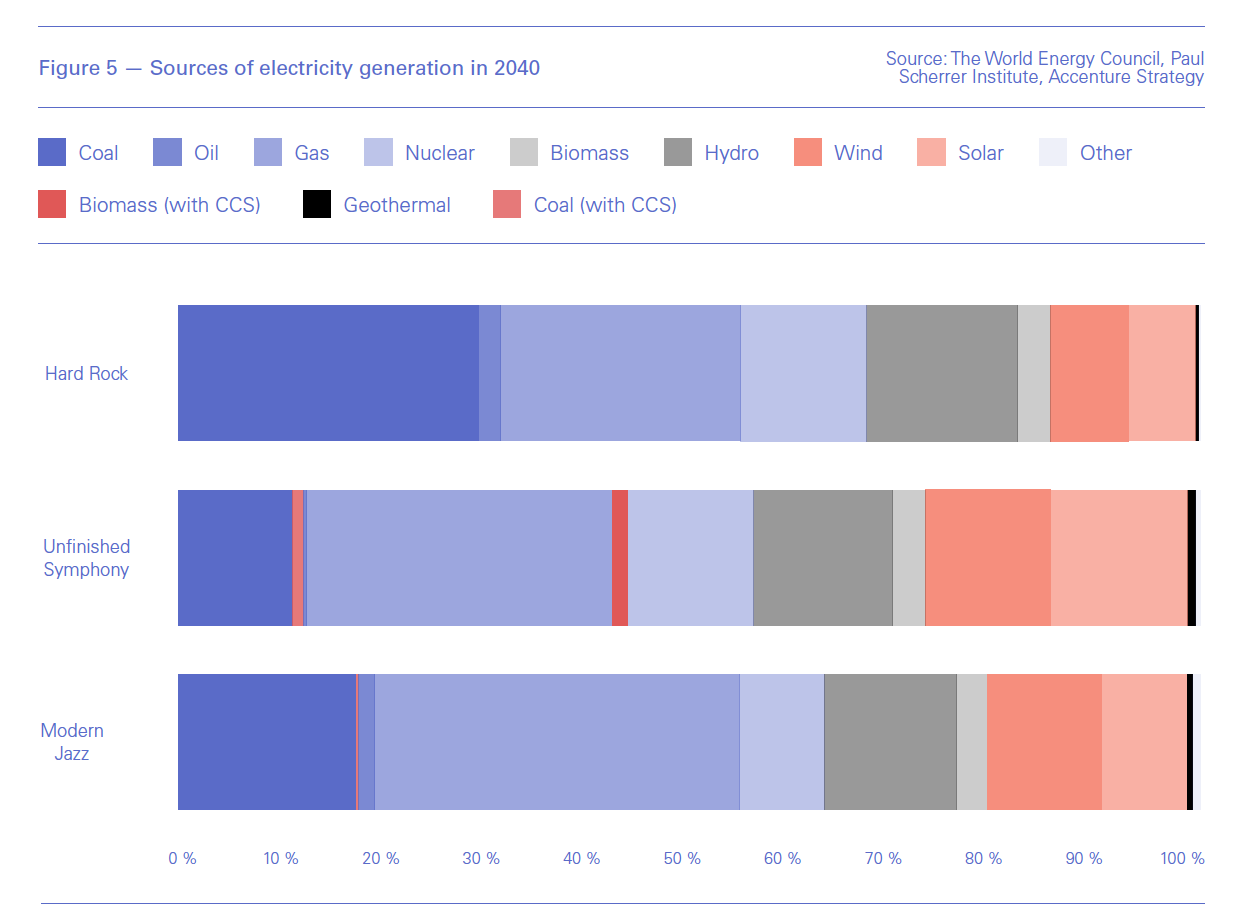 However, these findings are at odds with other outlooks, such as those by BP and the IEA, which forecast faster growth of renewables, providing a much bigger share of electricity demand by 2040, and gas less so.

However, wind and solar provides the bulk of the growth in electricity production between now and 2040, while gas accounts for about a third. But up to a third of coal capacity will be retired. These developments will require massive new investments.

Efficiency is at the forefront of decarbonisation of electricity, supported by better systems integration, smart grids and improved load management.

China will lead the world in renewable energy innovation, as it ramps up renewable energy, electric vehicle development and smart charging, and through integration with digital technology.

Flexibility in energy systems will be provided through the production of low-carbon synthetic fuels – such as hydrogen, methane, ammonia or methanol – using excess renewable power capacities.

Implications for carbon and climate

Not surprisingly, the forecast growth in primary energy demand (Figure 1) and the significant contribution from fossil fuels (Figure 3) under all scenarios mean that that none of these scenarios meet the well-below-2 °C target in the Paris Agreement (Figure 6).

Modern Jazz achieves a 0.06% compound annual reduction in the period to 2040, which limits the global temperature increase to 2.5 °C. Hard Rock would lead to an increase of 3 °C. In spite of carbon emission reductions in Europe and North America, the decline in global energy-related emissions is relatively slow, mostly because of south and east Asia.

The Unfinished Symphony is the most plausible high decarbonisation pathway of the three, leading to a global temperature increase of just above 2 °C. This is achieved through higher energy efficiency, deployment of best available technologies and a shift to low-carbon fuels, including doubling of electricity by 2040 in comparison to 2015 (Figure 4). 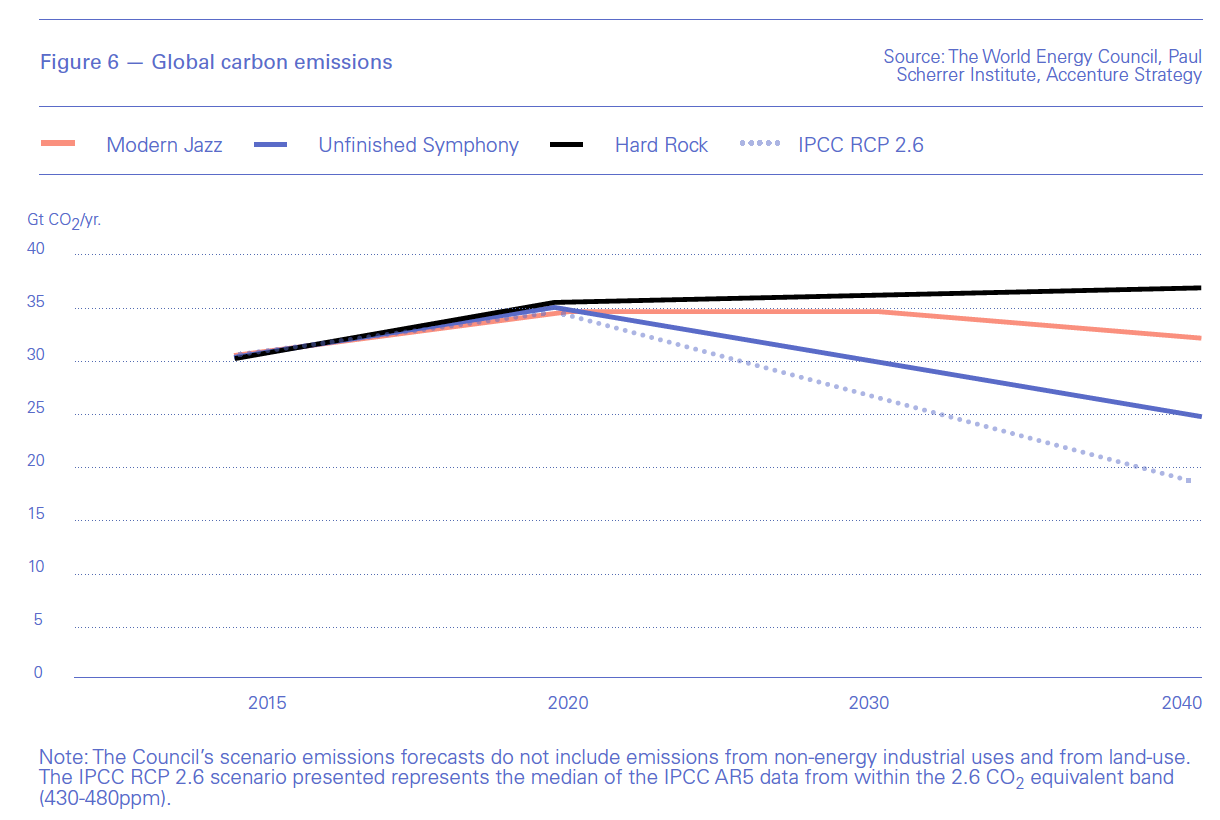 Across all scenarios, energy infrastructure planning and development are key factors in determining the reach, scale and affordability of decarbonisation. Carbon pricing, hydrogen and CCUS become increasingly important towards 2040. Digitalisation is expected to play a key role in eliminating fugitive methane emissions.

But a worrying development is that despite their nationally determined commitments (NDCs), some countries appear to be slowing their drive to decarbonise their economies and energy systems. On the positive side are the demands for higher living standards, better health and a cleaner environment.

The WEC states that “the emerging trends and new insights highlighted in this report make it clear that disruptive innovation is opening up significant new business opportunities for those energy leaders and organisations that are prepared to seek and create them.” Innovation is accelerating the energy transition.

WEC recommends that policy-makers should implement sector-coupling policies to enable faster, socially affordable and deeper decarbonisation of the whole economy. In addition, they should encourage energy system integration between consumers and producers.

Digitalisation is impacting the whole energy value chain and enabling huge improvements in energy efficiency within existing production and delivery, as well as for wider and new energy uses. In the oil and gas sector, digitalisation not only increases efficiency and brings costs down – enabling the development oil and gas reserves at lower costs – but it also helps reduce its environmental footprint. In addition, Big Oil morphs into Big Energy as their portfolios shift away from oil to gas, petrochemicals and renewables.

Digital giants capitalise on artificial intelligence, their capacity and their direct interaction with individual customers allowing them to integrate energy systems and manage the grid. This enables them to make money from electrified mobility and other energy-related services too.

The speed of decarbonisation is challenging the pace of economic and social reforms in major fossil fuel resource-holding countries, through its impact on fossil fuels, as they find it difficult to adjust their economies to this change. On the positive side, global geopolitics will no longer pivot on oil and gas.

But domestic energy security is becoming an important issue for an increasing number of countries. This leads to a reduction of reliance on energy imports, favouring the development of domestic energy sources instead. These can include coal, nuclear and renewables.

WEC states in the report that “with peak demand for fossil fuels expected to occur in the coming decades as a result of declining energy consumption per capita and an accelerating supply of renewable energy, oil and gas companies and major resource holders are facing a new phenomenon of ‘peak value’ and the associated challenge of managing stranded assets.”

WEC gives as an example the coal industry which has “already experienced a peak value effect, with the four largest US companies having lost nearly 90% of their value from 2011 to 2018.” Some parts of the oil and gas business, such as oilfield services, are already exposed to this dynamic, with valuation reductions exceeding 70% for the largest players.

Muqsit Ashraf, senior managing director energy, Accenture Strategy, sounded a warning. “Disruptive innovation is driving change in the energy system at an unprecedented scale and pace... Our new Energy Scenarios highlight the impact of technology, policy, social, and business model changes on the demand and supply side. Our report suggests that under plausible scenarios, the climate targets are elusive” – issues still in need for answers.