What are the prospects for natural gas in Europe, during the bloc’s 30-year transformation into a ‘net zero’ economy? Can it expect a slow decline, or are there areas where it has value in the medium or long term?

Although the EU and its institutions continue to invest in gas infrastructure, analysis of investment by the EU’s flagship European Investment Bank (EIB) show a continued decline in gas financing in favour of electricity projects.

Gas has been a key fuel in the power sector in markets such as Great Britain. It meant coal plants could be superseded by more efficient and less carbon-intensive power plants that also offered ‘like for like’ grid management services – flexibility, inertia and so on – to help power system operators who were grappling with rising levels of renewables. 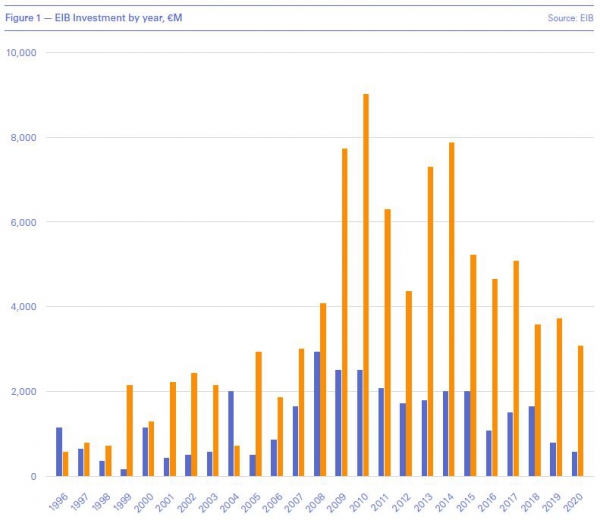 The story for gas now in most countries is one of stasis or gradual decline as levels of renewable generation increase and system operators find alternatives for their system services. But two countries have still to make this transition from heavy reliance on coal and they stand out as potential new markets. The two biggest coal users in EU are Germany and Poland, although otherwise they represent energy extremes.

Germany set its face towards a green future early and has made huge investment in renewables. Poland has been a leader in attempts to slow down the EU’s exit from fossil fuels. But they have found it equally hard to reduce the contribution from coal and manage structural changes relating to their large extractive industries for ‘brown coal’ or lignite and ‘hard coal’ or anthracite.

Now both countries have long term energy and climate planning in their sights, not least because the EU requires two-yearly updates on member states’ climate and energy plans, agreed as part of 2019’s Clean Energy Package.

Germany’s Climate Action Plan promises no further government support for coal, leaving a flexibility gap that it expects to be filled at least partly with gas. It says: “On the way to an economy that is entirely based on renewable energy, we will still need gas-fired power stations because they are highly efficient, have relatively low CO2 emissions and are controllable, which makes them essential for our sup­ply security.” But this is a transition. The plan adds: “Over the coming decades, we must replace natural gas with CO2-neutral gas from renewable sources.” 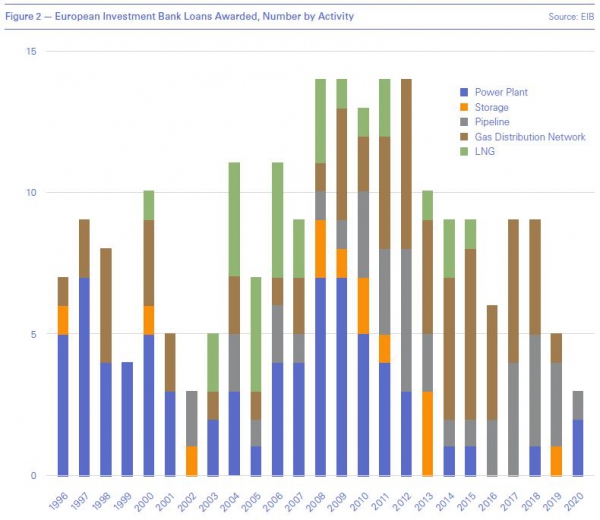 In addition, “combined heat and power production, preferably based on natural gas, will continue to play an im­portant role,” but it is supposed to incorporate renewable heat production, so that it will gradu­ally become possible to phase out fossil fuels completely in this market too.

Poland’s plan specifically mentions gas as a ‘transition fuel’. In large-scale power production gas would be competing with large renewables (offshore wind) and nuclear to capture the lion’s share of a post-coal market. The choice will be partly determined by how tightly  the EU sets emission limits in a new ‘taxonomy’ for the power sector; plants whose emissions are too high cannot be classified by investors as ‘sustainable’ or ‘transitional’ plants.  The taxonomy is still in debate.

But Poland has some other low-hanging fruit that could be tackled, such as converting 54 GW of district heat projects from coal to gas.

It’s not about power

While the EU has slowed its investment in gas-fired power stations, its institutions have not stopped funding gas infrastructure.

Investment in gas-fired power projects peaked around a decade ago – but the EIB, for one, retains an interest in funding other gas projects. Further analysis of its gas investment reveals that the bank’s support has shifted to the transport of gas, rather than its end-use. That is partly because of gas’s continuing role as a source of flexibility. But perhaps more important in the long run is the pressing need to decarbonise heat and the growing recognition that gas networks are a source of large-scale energy transfer and storage.

As a result, gas investment is focusing more and more on networks. EIB funding has been given the go-ahead for international pipelines, LNG terminals and for the upgrade and expansion of low-pressure gas distribution networks (GDNs) that deliver gas to homes and businesses.

The EIB is not the only EU institution providing support for gas networks. The EU’s ‘Projects of Common Interest’ are priority energy network projects that cross member states’ boundaries, agreed after consultation by the European Commission’s Energy Directorate. Projects in the list get a somewhat easier ride through national development consent procedures and have an open door to financial support from the EU’s dedicated fund, the Connecting Europe Facility. The PCI framework goes back to the EU’s 2013 ‘TEN-E’ regulation on cross-border energy infrastructure planning. 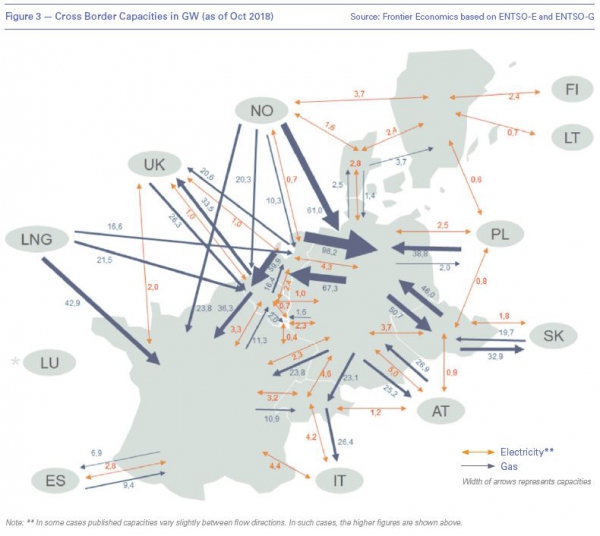 In 2019 the priorities in the gas sector remained substantially the same as they were a decade earlier, with projects in the following clusters:

Southern Gas Corridor: enabling receipt from the TransAnatolian/Adriatic pipelines via Turkey and from the eastern Mediterranean from Greece to Italy.

Baltic Energy Market Interconnection: including connections between the Baltics and Poland and Denmark, as well as underground storage.

The PCI list is undergoing its two-yearly review and the new list of PCIs will be revealed at the end of 2021. But behind the choice – and the continuing investment – lies the consideration that the networks may no longer be used to transport gas but instead could carry ‘low carbon gases’ and in particular hydrogen.

There are significant lobby groups in the EU that would like to see the bloc move away from gases entirely, in favour of full electrification, or away from natural gas towards ‘low-carbon gases’, which could encompass hydrogen or a pared-down system using ‘bio’ gas.

This is ambitious because, as Christoph Reichmann, director, Frontier Economics UK, pointed out, it requires policy consistency across the bloc. Speaking in June at the Energy Trading Central and South Eastern Europe conference – which was held virtually in 2020, and is due to be held this year in Prague – he noted that while the EU had a comprehensive framework to drive investment in low-carbon electricity, as regards low-carbon gases the policy objectives were unclear, with existing measures that were often overlapping and contradictory – especially when considered in a world of ‘sector coupling’. He cited German rules, for example, that penalised the use of green electricity if it were used to produce green gas.

Transfers of gas across European national boundaries are much greater than electricity transfers, as Frontier Economics showed in a report for the industry’s lobby group European National Transmission System Operators-Gas (Entsog, see chart). And most important, the transfers and local networks would require consistency in managing, transporting and paying for low-carbon gas mixes that have different composition and calorific values. It is anyone’s guess how long it would take to bring those requirements into alignment.

Ten-year network development plans now under consultation by Entsog look forward to energy systems dubbed ‘decentralised’ and ‘centralised’, both of which continue to use gas but in different ways.

In a consultation meeting Entsog had push-back on the scenarios from participants. One said that instead of characterising the scenarios as centralised or decentralised, “it is rather ‘electricity-centred’ versus "gas-centred". Another asked, “Why is there the need for 'gas system' planning? This should be changed to 'heat system' requirements because heat is a service provided by many sources, like electricity. Otherwise, your scenario is locked into gas provision not heat.”

Another point of contention is whether ‘green’ hydrogen can include hydrogen sourced from gas with carbon capture and storage. In December, the parties compromised: member states agreed to “rapidly upscale the market for hydrogen at EU level,” recognising that “emphasis should be given to hydrogen from renewable sources” of energy such as wind and solar power. But at the same time, the European Council also emphasised that “there are different safe and sustainable low-carbon technologies for the production of hydrogen” – comfort for countries planning to support hydrogen produced from natural gas (or nuclear power).

The crunch will come this year. A revision of the TEN-E regulation will exclude cross-border natural gas infrastructure. But it recognises that a hydrogen grid will probably be based on a repurposed national gas grid, and as above, the EIB has already provided loans to networks that are upgrading their pipework to accept hydrogen.

The UK, in an Energy White Paper published in December, said: “By 2050 we expect low-carbon options, such as clean hydrogen and long-duration storage, to satisfy the need for peaking capacity and ensure security of supply at low cost, likely eliminating the reliance on generation from unabated gas.” The UK’s careful use of the term ‘clean hydrogen’ means that it could refer to either hydrogen produced from electrolysis or that produced from steam methane reforming, with carbon capture and storage.

Similarly, the EU will probably continue to invest in the infrastructure that enables ‘clean gas’ to be an important energy vector across the bloc. Whether that encompasses hydrogen from natural gas will continue to be one of the bloc’s big policy battles next year. Decisions over which gas routes and pipeline connections remain among the next version of the EU’s PCI. They are therefore eligible to receive funding and general support for permits and paperwork on the grounds that these are agreed to be necessary. The list is due to be completed at the end of 2021 and it will show where the battle lines are drawn.