Gas in the doldrums [NGW Magazine]

Spot LNG prices in northeast Asia, still by far the world’s biggest LNG market, dropped 50 cents to $4.30/mn Btu ($14.6/MWh or 36 pence/therm (p/th)) in the first week of July, before edging back up to $4.40/mmBtu as NGW went to press. This is a ten-year low and follows a similar dip a month ago. 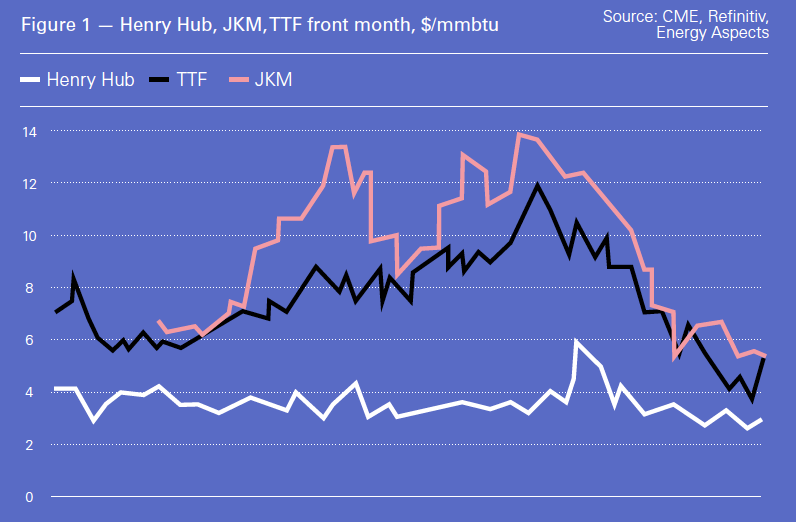 Unusually, the UK hub, the National Balancing Point, has been trading at close to parity or even a slight premium to TTF, reducing Interconnector UK flow – partly because of record high storage levels in Europe this spring, which have built up on a mild winter and heavy Russian pipeline gas and many LNG arrivals.

The relative movement has meant a dramatic increase in LNG flow to Europe. As well as increased deliveries from the US, rising output from Russia’s Yamal LNG has weighed on European markets, with many cargoes re-exported – although the opening of the Arctic route to Asia in late June eased this factor, allowing deliveries to Japan for the first time ever.

Then, in the second week of July, a string of unplanned maintenance shutdowns cut Norwegian flow, which has now pushed European price levels above those in Asia for the first time in four years – reopening arbitrage flow to Europe from as far east as west Asia and closing Atlantic flow to Asia.

One trader commented July 12: “We [the UK] are, for now at least, well above Asian LNG pricing; so a few more [LNG] tankers should be heading our way, so long as they make it through the Strait of Hormuz, I guess.” On July 15, August TTF prices were at $4.56/mn Btu while NBP was $4.48/mn Btu, while Asian spot LNG for August was at $4.40/mn Btu. The trend continues out to October.

The slump in the Asian LNG spot premium to other regions had already cut flow into the Pacific basin, with nearly all Atlantic and Mideast LNG exporting countries, with the exception of Egypt, seeing sales to northeast Asia decline this year relative to last. US LNG flows to northeast Asia in particular have fallen sharply after expanding significantly in 2018. In the first four months of 2019, US deliveries dipped about 13%, and exports to China fell by three-quarters to just 268,000 metric tons, according to the US Energy Information Administration.

Nevertheless, global LNG arbitrage flows are generally growing as markets become geographically diverse with more countries importing and exporting. Supply from the US is an important driving force in this because of its numerous spot sales, along with the sale of term cargoes on flexible terms that allow reselling and do not specify destinations – suppliers are thus free to pick the most attractive market at any point in time.

The US is set to become the third-largest LNG exporter by the end of this year, behind Qatar and Australia. New trains are coming onstream all the time, with the latest at the beginning of July, when Cheniere produced its first cargo from its new Corpus Christi Train 2. However, the fall in European prices is proving tough for lifters that have signed up high priced deals, and LNG sellers that have yet to place cargoes. Some existing term contracts are being sold to buyers from markets where prices are far lower than anticipated, while the price paid is normally linked to a US benchmark.

A number of these term contracts are due to start up as new capacity comes onstream this year. These include Centrica’s deal with Cheniere Energy beginning September: supply will come from the fifth unit of Sabine Pass, which started commercial operations earlier this year. Centrica has agreed to pay Cheniere a fixed fee of $3/mn Btu and a commodity fee of 115% of the Henry Hub price, to cover the purchase and liquefaction of the gas. So, if that were to be priced today at current US/UK prices – $3+(1.15x2.39) = $5.75/mn Btu (or 48p/th) – it would be well above current UK prices, and only just above the current assessment of the Q1 2020 NBP price, although the company says much of the early part of the deal is hedged. Centrica has the right not to lift cargoes, but would need to notify the seller in advance if it wishes to do so.

US LNG producers have the longest route to Asia (from east and US Gulf coasts) and – as the import numbers show – they have also been hit by Chinese tariffs, imposed in retaliation against the US. This, combined with the low prices, is making it even more difficult for some export projects to secure financing, although most appear to be pushing ahead. Banks want to see traditional oil-linked sales and purchase agreements before committing capital, but buyers in today’s well-supplied market are keener to link to gas markers.

Bearish market sentiment has also prompted talk of US production shut-ins. But, so far, low feedstock gas costs (Henry Hub prices remain well below other markets at $2.39/mn Btu as of July 15, although still well off record lows of $1.57/mn Btu); and the longer-term global demand outlook as the winter heating season looms – as well as the long term offtake commitments – has kept flow steady.

Some market sources are cutting estimates of northeast Asian price forecasts for the upcoming winter to as low as $6.50-$7.50/mn Btu from earlier forecast of above $8.00/mn Btu. Prices for cargoes delivered in September are now priced around $4.70/mn Btu. An increase in coal-powered capacity of over 10 GW in Japan over the next few weeks has further weighed on bearish Asian sentiment.

But if demand is sharply down in northeast Asia, there are a few brighter spots in Europe. Spain is seeing higher demand on reduced hydropower output; and in Europe air-conditioning demand is up as the heatwave continues. In the UK, gas demand has been higher than normal through most of the second quarter, partly owing to consistently low windspeeds – for the second year in a row – and also the lack of coal use. In that respect, the records have kept tumbling, including a few weeks without coal in June – and heavy nuclear maintenance.

German coal use is also sharply down in power generation, making room for more gas, although gains were capped by record solar output which supplied almost a fifth –19% of the total – in June.

In a Nutshell - Season 1, Episode 1 - The role of natural gas in the UK power market