At one time Southeast Asia was synonymous with LNG exports, with deliveries in 2008 from Brunei, Indonesia and Malaysia accounting for almost 30% of global LNG sales. No longer. While still a significant exporter with 12% of the global market in 2020, the region is also now an important destination for the fuel, and much of the growth in demand has come from gas-fired power plants. 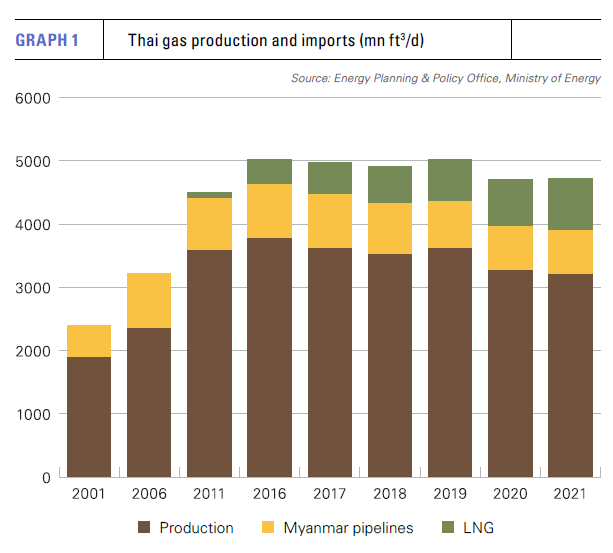 Nowhere is this truer than in Thailand, which is the largest single natural gas consumer in Southeast Asia. According to BP data, the kingdom used 1.69 EJ (46.9bn m3, 4.52bn ft3/d) of gas in 2020 (see graph 1), with the fuel accounting for a third of the country’s total primary energy consumption.

Thai gas demand has been growing strongly for decades. Consumption increased from about 2.4bn ft3/d in 2001 to almost 4.4bn ft3/d in 2021, according to statistics published by Thailand’s energy ministry

However, the COVID-19 pandemic and other factors meant that the latter figure was down from almost 4.8bn ft3/d in 2019, double the level of 2001.

Much of the gas is used for electricity generation, with ministry data showing that last year just over 2.6bn ft3/d – 59.2% of total gas consumption – was used in power stations (graph 2). Gas-fired generation totalled 113.1 TWh, according to the ministry, representing 54% of the 209.7 TWh of total Thai electricity supply. But, if the 33.4 TWh of power imported by Thailand last year is excluded, gas accounted for almost two-thirds of the country’s actual generation. 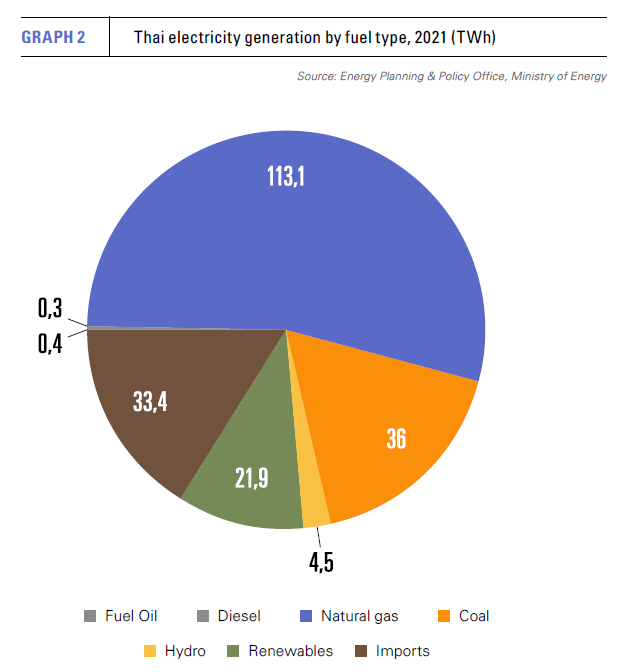 Until relatively recently it was officially projected that gas’s share of Thai power generation would fall significantly as more electricity was generated from renewables and coal. Renewable output has certainly grown, increasing more than fivefold between 2011 and 2021 to almost 22 TWh. But the potential for renewable generation is constrained by factors including geography, climate and the limited availability and high cost of land, with most of the renewable energy currently generated coming from biofuels rather than wind or solar facilities.

Meanwhile, the amount of coal-fired generation capacity under development has almost completely dried up, in large part because of environmental and local opposition. The 2015 National Power Development Plan had anticipated that coal-fired output would more than double from 34.6 TWh in 2015 to 73.7 TWh in 2036, based on the construction of 7.39 GW of new capacity. The great majority of these projects have been cancelled.

Global Energy Monitor’s Global Coal Plant Tracker said in January 2022 that Thailand had no coal-fired plant under construction and only 0.6 GW under development, whereas 11.67 GW of plant had been cancelled between 2010 and 2021.

The latter included long-standing plans by the state-owned Electricity Generating Authority of Thailand (Egat) to build 3 GW of coal-fired capacity in Krabi and Songkhla provinces in southern Thailand. In July last year, Egat said that instead it planned to build 1.4 GW of gas-fired generating units in the Phunphin district of Surat Thani province for commissioning between 2027 and 2029.

In common with Chana, Egat’s project in Surat Thani is predicated on the use of LNG. While Kogas will be responsible for supplying LNG to the Chana plant, the latter project will be supplied with LNG from a regasification terminal planned by a joint venture between Egat and state energy company PTT.

Integrated gas-fired plants and LNG terminals are becoming increasingly common in Thailand. In February, Egat and PTT signed a joint-venture agreement for a 7.5mn metric tons/year LNG terminal at Nong Fab in Rayong province that would serve the Bang Pakong and South Bangkok power plants. Known as LMPT2, the terminal is already under construction and is scheduled to enter operation in 2022. It will complement PTT’s operational 11.5mn mt/year terminal at Map Ta Phut in Rayong.

The switch to LNG reflects the worsening problems facing Thai gas production and piped imports. Thailand’s reserves-to-production ratio had slipped to a parlous 4.4 years by 2020, while production from several operational fields, including the major Erawan field, have faced problems.

It is likely that Thailand’s domestic gas output will increase from current levels as investment in the sector revives, not least since agreements to resolve a protracted dispute over the handover of Erawan from Chevron to the local PTTEP were signed in late 2021. The dispute on who will pay the decommissioning costs for the field has stymied investment in the complex.

Thai gas production is nevertheless unlikely to return to anything like its former levels, with the shortfall in output being exacerbated by constrained pipeline imports from Myanmar’s Zawtika field and the limited options for the replacement of gas-fired generation by alternative fuels. With gas demand expected to continue growing strongly in the power sector and other markets, LNG imports will have to grow in tandem in the near to medium term at least.

Thailand’s need for additional LNG imports to fuel existing and planned gas-fired generators is far from unique in Southeast Asia. For instance, in the Philippines, a joint venture between the local power company First Gen and Japan’s Tokyo Gas began development of a floating storage regasification unit (FSRU) at Batangas on Luzon in 2021. 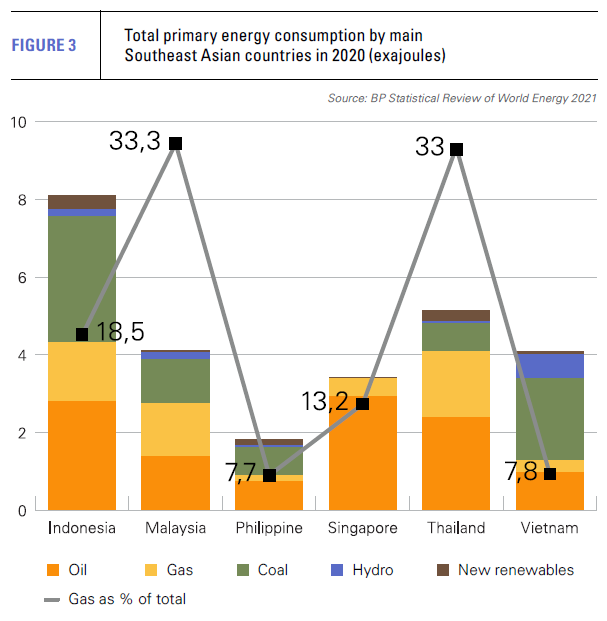 LNG from the 162,400 m3 facility will supplement and eventually replace gas from the Malampaya field, which is expected to be depleted by 2027.

In Vietnam, several integrated projects have been proposed, including a 3.6-GW generating plant and 3mn mt/yr LNG terminal being developed in Binh Thuan province by a joint venture including Thailand’s B.Grimm Power. These projects are on top of plans by the state-owned energy company Petrovietnam to develop at least ten LNG terminals.As in Thailand, many proposed gas-fired projects are looking at integrating the plant with LNG import facilities. For instance, a subsidiary of Thailand’s TTCL said in 2021 that it was developing a 388-MW gas-fired independent power producer project and associated LNG terminal at Ahlone in Myanmar.

Quantifying the amount of new gas-fired capacity and the associated demand for LNG across the region is not easy. For instance, some integrated projects are predicated on selling LNG solely to the generating plant, while others see the generating plant as merely a foundation customer. In part this depends on how liberalised the LNG, power and overall energy markets are in the particular country. 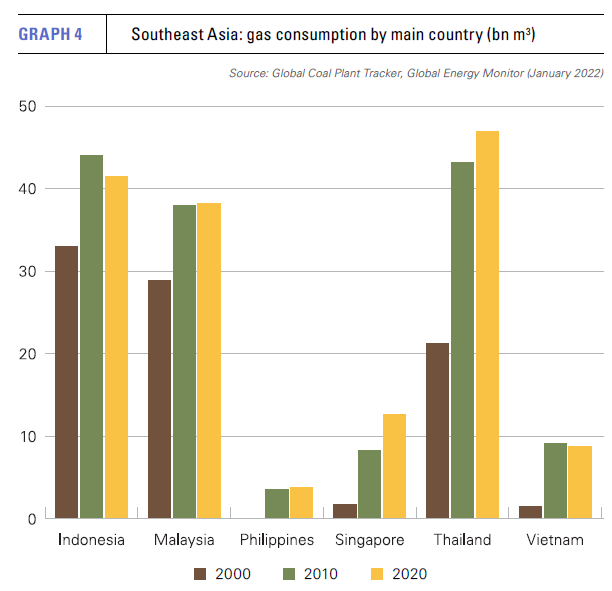 There are also a great many speculative projects both on the generating and regasification side of the equation. Indonesian and Vietnamese prospects are particularly difficult to assess, with the financing, regulatory and other uncertainties that affect both countries being magnified by the size of their economies.

However, in most countries in the region the same issues that have affected Thailand are at play, and suggest that there will be significant growth in LNG demand (see graphs 3 and 4).

Domestic gas production is declining or stagnant in many countries, with limited prospects for large-scale expansion in existing fields or new areas. Transboundary issues, including the ownership of some key prospects in the South China Sea, are also a significant factor.

In terms of competing fuels, the region’s renewable energy prospects are mixed, but there are constraints on the development of large amounts of efficient capacity in many countries. New coal-fired generation plants are increasingly problematic throughout the region, not only because of the rising tide of environmental and local opposition, but also because of financing and regulatory issues. As a result, about 132.04 GW of coal-fired capacity has been cancelled in ASEAN countries since 2010, according to the Global Coal Plant Tracker (see table 1).

While assessing how much new LNG will be needed in the region is problematic, it does seem certain that the amount will be substantial, especially in countries where there is a preponderance of existing or planned gas-fired generating plants. In other countries, high LNG prices, now and in the future as Europe increases LNG use to reduce its dependence on Russian gas, may prove a significant deterrent. Yet it still seems likely that LNG will be a key bridging fuel in southeast Asia and, in many cases, it seems likely to involve a very long bridge.