Natural gas continues to dominate the US power generation mix, while coal-fired generation falls to new lows. This trend has been supported by low gas prices and, more recently, a growing focus on cleaner energy. In turn, gas appears set to be increasingly edged out by renewables in the coming years.

To some extent this would confirm claims that it can act as a bridge but not destination fuel, though it is not expected to be phased out altogether. Nonetheless, it is possible that the Covid-19 pandemic could help accelerate the energy transition rather than slow it, and this would have implications for the power generation mix.

Gas in the lead

Data from the US Energy Information Administration (EIA) show that gas overtook coal to become the primary source of power generation in the country in 2016. Prices for the fuel have remained low since – having already been relatively depressed since the shale gas boom first began, but sinking even further as the US gas glut worsened. 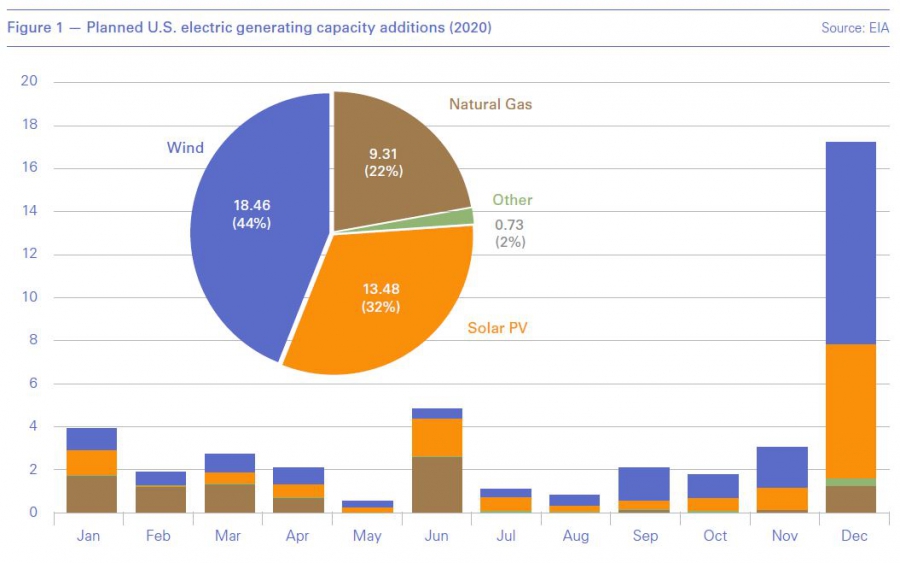 This combination of ample supply and low prices has made gas an increasingly popular option for power plants. The impact of the shale boom on power generation is illustrated by the fact that many of the gas-fired power plants built in recent years are near major gas-producing regions, though other factors play into the location of such plants too.

“There can be certain advantages with developing gas-fired generating capacity in close proximity to gas-producing regions,because it could help with securing access to the resource,” the EIA told NGW in emailed remarks. “In that regard, a large share of new gas-fired power capacity recently has been built in the states of Texas, Ohio, and Pennsylvania to take advantage of rising production from major shale gas plays,” the agency said. Access to gas transmission and regional factors have an impact too, though, and indeed gas-fired power plants have proliferated across the US.

Coal out, renewables in

The expansion of gas in power generation has come at the expense of coal, which has found it increasingly difficult to compete. This is despite the US president, Donald Trump’s, pledge to revive the coal industry upon taking office.

“If you look at it purely from an economic standpoint, [coal] just wasn't competitive anymore,” a Lux Research senior analyst, Yuan-Sheng Yu, told NGW. “So unless there were going to be some heavy subsidies and incentives to boost up that industry, it just couldn't compete, because natural gas prices are so low in the US.”

Even though coal prices have also been gradually declining, from around $2.25/mn Btu on average in 2015 to less than $2.00/mn Btu in late 2019, this does not go far enough. The EIA estimates that the delivered cost of coal must be at least 30% lower than gas to make up for the differences in efficiency between coal-fired plants and gas-fired ones. And in the case of more efficient natural gas-fired combined-cycle plants these differences are even greater.

The benchmark Henry Hub gas price, meanwhile, averaged $1.74/mn Btu in April – a level at which there is no threat of competition from coal – having traded below $3.00/mn Btu for most of 2019. The EIA reported in mid-May that US coal-fired power generation totalled 966,000 GWh in 2019, marking the lowest level since 1976 and a 16% decline – the largest ever in percentage terms.

These figures show how renewable power is gathering momentum, with its growth now outpacing that of gas slightly. The trend is forecast to continue this year, with the EIA anticipating that renewables will be the only source of power generation that grows in 2020, while gas-fired generation stays roughly flat. 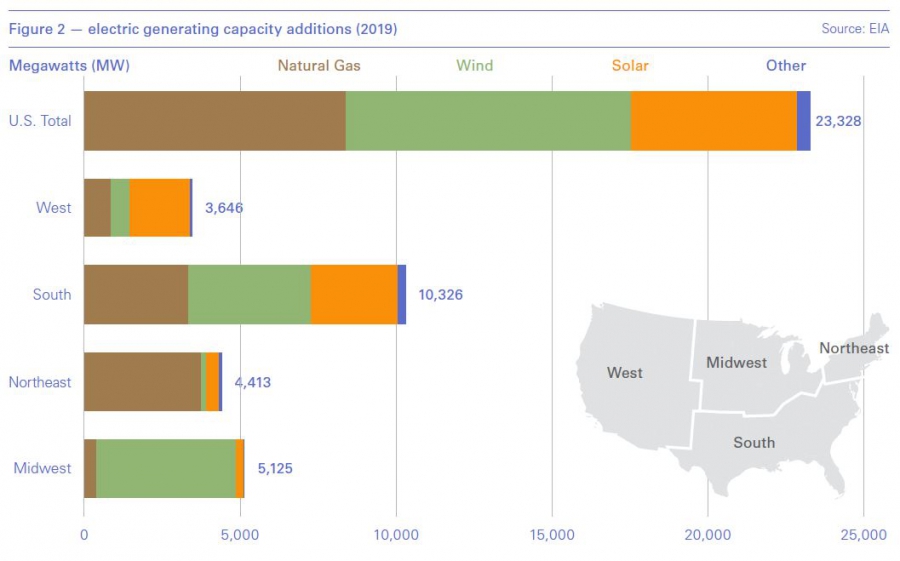 “We expect the corresponding increase in the share of generation from renewables to affect the share of generation from natural gas and coal, especially in 2021 after most of the new renewables capacity has come online,” the EIA said. “However, a large amount of uncertainty exists as to how the current economic downturn and other restrictions resulting from mitigation efforts related to Covid-19 will affect the construction of new solar and wind capacity over the coming months. If realised growth in renewables differs from what EIA is currently expecting, this could also impact the resulting mix of generation from natural gas and coal.”

Much about the overall impact of Covid-19 and the steps taken to combat its spread remains unknown. For now, the EIA forecasts that US power generation will fall by 5% this year, but the impact on coal will be particularly pronounced. Even as gas-fired generation is being forecast to stay flat – with some new capacity additions made in 2020 – coal-fired generation is projected to fall by 25%.

Nonetheless, the EIA appears more optimistic on coal’s medium-term potential, projecting that its share of generation in 2021 will rise slightly while the gas share falls as a result of higher prices. By contrast, Lux Research has suggested that Covid-19 could result in the demise of the US coal industry. “The trend has already been there, Covid was just the final nail in the coffin,” said Yu.

The latest data from the US Department of Labor paint a bleak picture for coal, showing that the number of coal-mining jobs dropped 12% in April to 43,800 – the fastest rate in decades.

Questions have been asked regarding the impact Covid-19 would have both on current construction of power generation infrastructure – which could be affected across the board – and the longer-term pace of the energy transition. Within this is a further question about the role gas will continue to play, and to what extent it can truly be a bridge fuel. Lux Research is of the view that Covid-19 could in fact help to accelerate the energy transition.

“In some situations, an investment in upstream asset right now is actually less attractive than investing in a renewable project, just because there's uncertainty of oil and gas demand and uncertainty of price volatility,” said Yu. “There might actually be a purely economic incentive to go renewable right now if you are aggressively investing during this time.”

He added that in the US, some new LNG developments were being delayed in response to conditions caused by Covid-19, and that capital may end up being redirected from such projects towards renewables. Despite this, he maintains that there is an important role for gas to play in US generation.

“It will probably continue to make up a very large portion of power generation in the US,” he said of gas. “It's part of the country's economic strength, so I highly doubt that they will be phasing that out for environmental purposes.”

Indeed, the EIA’s long-term outlook has renewables taking the lead to account for 38% of gas generation by 2050, but forecasts that gas will not be far behind, at 36%. What remains to be seen, though, is how these percentages will shift if coal fails to survive the impact of Covid-19.

Cracking on with hydrogen [NGW Magazine]