Canada’s gas-weighted producers have lived in the shadow of their oil-producing brethren ever since crude oil prices topped US$100/b in the not too distant past.

But the global demand destruction visited on crude oil and refined product markets as a result of varying degrees of lock-down restrictions in response to the Covid-19 pandemic – including a near elimination of international air travel – has pushed Canada’s gas producers into favour with investors.

Shares of most of Canada’s top gas-weighted producers, including Tourmaline Oil, the country’s largest gas producer, and Peyto Exploration & Development, one of the largest producers in the predominantly dry gas Deep Basin of Alberta, have increased dramatically from troughs reached in the days following the World Health Organisation’s pandemic declaration on March 12.

Beyond higher share prices – shares for oil-weighted producers have also increased, but not nearly as sharply as those weighted to gas – heightened investor interest in gas plays manifested itself for Return Energy in April, as it moved to acquire gas-heavy Bellatrix Exploration for C$87.4mn cash and the assumption of about C$14.8mn of liabilities.

The assets to be acquired represented more than 25,000 barrels of oil equivalent (boe)/day of production – 70% gas and 30% crude oil and natural gas liquids – some 130,000 net acres of stacked rights in the heart of Alberta’s Deep Basin and “strategic working interest ownership” in three gas plants, including one operated deep cut facility.

As part of the transaction, Return planned a concurrent equity financing to raise C$20mn from the sale of 1bn subscription receipts priced at C$0.02 each. After close, Return planned to rename itself Spartan Delta.

Before that came to pass, however, Spartan Delta was forced to “upsize” the equity financing, to $64mn of proceeds on 3.2bn subscription receipts, due, it said, to “excess confirmed and committed institutional demand.”

Feeling better all the time

The resurgent interest from investors, combined with consensus views that gas-weighted producers will weather the impacts of Covid-19 much better than their oil cousins, has the sector feeling better about its future than it has for at least the last couple of years.

“This is the most optimistic I have seen it for Canadian gas since early 2018,” RBN Energy analyst Martin King told NGW in a late-April email communication. But like many Canadians on many issues, he offered a ‘but’ to his optimism: “It could be reversed quickly – demand pull back for gas in the oil sands could be larger than expected over the next few months – so let’s keep our fingers crossed.”

In King’s eyes, Canada’s gas industry is now largely reaping the rewards of cost-control measures it has been forced to take since 2018 merely to survive weak demand, a flood of shale gas produced in the US, which has long been Canada’s main export customer, and the inability to access Asian export markets with LNG.

“There is an expectation – and mounting evidence – that US gas supplies are starting to head lower, especially in the associated gas plays such as the Permian, Eagle Ford and the Bakken, so this should ease the competitive pressure on Canadian gas exports to the US, and maybe create some additional room for more Canadian gas in a few US export markets,” King said. “Gas exports into the US Midwest, for instance, have already moved materially higher as less associated gas is being produced in the Bakken.” 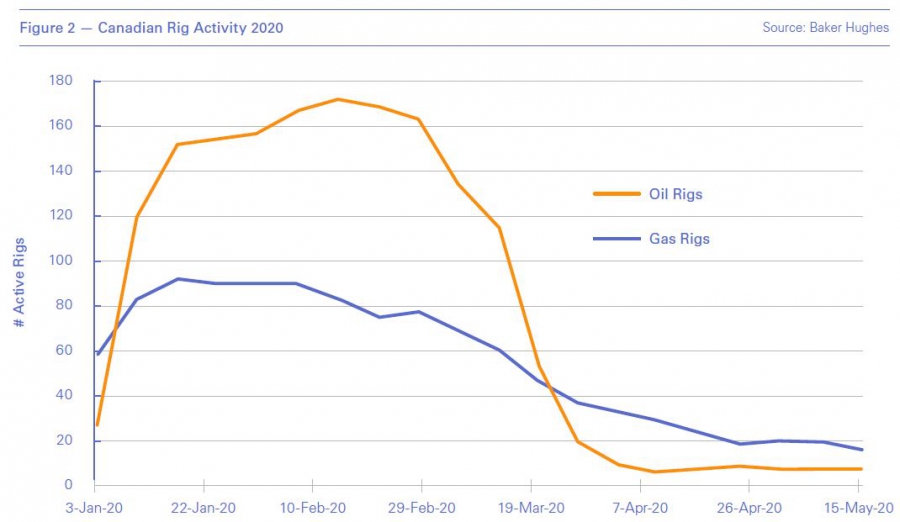 By the middle of May, Bakken producers had shut in 7,500 wells, representing 510,000 b/d of crude oil production, according to the Bakken Restart Task Force, established by the state’s department of mineral resources to formulate ways to help the industry recover from the Covid-19 measures. The task force didn’t say how much associated gas was shut in, but it did note that gas plants serving the Bakken were “close to maximum turn down capacity (35%).”

Also by the middle of May, the much-watched Baker Hughes North American rig count, was showing just 16 rigs active in North Dakota, down from more than 50 in January and February and from 56 at the same time a year ago.

At the same time, dry gas production from the massive Marcellus and Utica basins in the US northeast Appalachian region is heading lower as operators across the US – and Canada – pull back capital spending in an effort to preserve liquidity. May production from the basins, according to the US Energy Information Administration (EIA), is expected to average 326mn ft3/day lower than it did in April; Norwegian research firm Rystad Energy, in a May 19 report, put projected lower 48 US (excluding the Gulf of Mexico) output at 86bn ft3/day in May and predicted gas production would bottom out at 84.5bn ft3/day in November this year, before gradually recovering to about 86.5bn ft3/day by the end of next year.

The pull-back in spending is evident in rig activity data from Baker Hughes. While drilling is down broadly across the industry and across North America, there has been a far greater impact on oil-directed drilling, especially in Canada.

In late February, when winter drilling was at its peak, there were 244 rigs working in Canada, and the vast majority – 69% or 169 – were drilling for oil; only 75 were on the hunt for gas.

By mid-May, drilling in Canada had been decimated, and only 23 rigs were actively working in Canada, a drop of more than 90%. The oil/gas ratio, however, had completely flipped: 16 rigs – or 70% of the total – were drilling for gas, and only seven rigs – or 30% – were targeting oil.

In the US, rig activity is also down sharply, with only 339 active rigs in the May 15 Baker Hughes count compared to nearly 800 in the first week of March. The oil-gas ratio, however, hasn’t moved much, with oil-directed drilling down about eight percentage points and gas-directed up about eight points.

Slowing field activity in the US is seen as a harbinger of falling production, as operators in the short-cycle shale basins fail to keep pace with rapid decline rates. And falling production south of the border can do little but help Canadian gas producers, who could regain export market share lost to US shale gas over the last few years and enjoy more robust commodity prices.

“With reduced dry gas development budgets in both the US and western Canada, we expect an increased call for Canadian gas from US demand centers,” consultancy Sproule said in a May 6 special market report optimistically titled Finding the Silver Lining: North American Natural Gas. Combined with post-pandemic demand restoration, the report says, Canadian producers can look forward to prices at the main Aeco hub more closely aligned with those at Henry Hub in the US: basis differentials, Sproule says, should again approach average transportation costs between the two hubs of about US$0.90/mn Btu. Last July, the differential peaked at more than US$1.80/mn Btu. 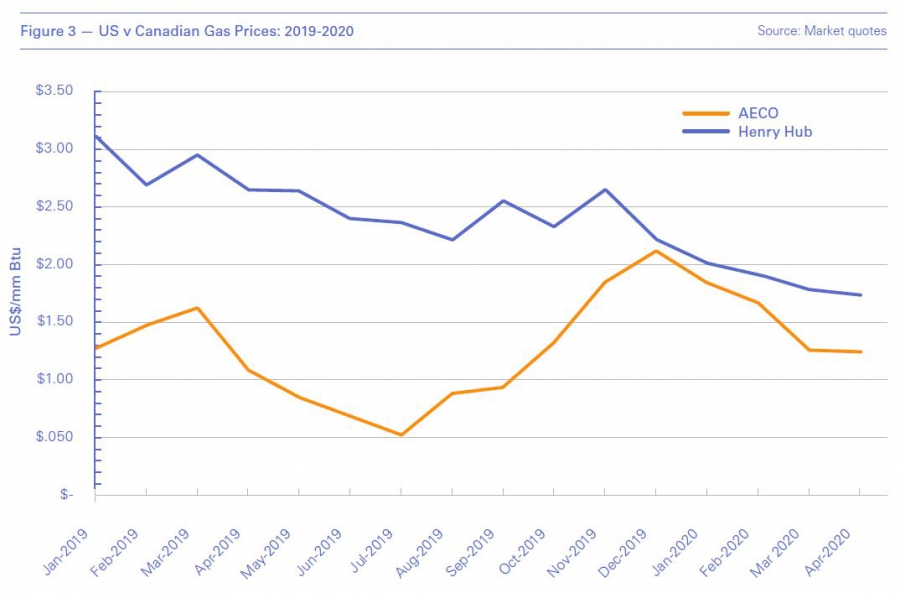 The spot price at Aeco, in fact, has been trending higher against Henry Hub since October 2019, when regulators approved a temporary service protocol (TSP) on TC Energy’s Nova Gas Transmission Limited (NGTL) system, which moves most of the gas produced in the Western Canadian Sedimentary Basin (WCSB). The TSP allows additional service flexibility for producers to access storage when the NGTL system is constrained by summer maintenance work – a key relief valve when demand softens.

Prior to implementation of the TSP, producers were unable to inject gas into storage during the 2018 and 2019 summers. With the TSP in place, the EIA says, western Canadian producers will be better able to move their gas into storage this summer, rather than to low-priced markets.

Still, Sproule takes note of one of those ‘buts’ that RBN Energy’s King cautions about: the loss of gas demand from Alberta’s unconventional oil sands sector as bitumen production – which relies on thermal energy generated from natural gas – is shut-in.

“We see the possibility of losing up to 25% of oil sands natural gas demand over the next several months, or 10% of total natural gas demand in Alberta,” the report warns. “This presents as a potential disruption to the positive momentum for Aeco gas prices prior to the Covid-19 outbreak.”

As the prospects grow for Canada meeting a greater share of North American gas demand, King says Canadian producers are well-positioned to meet that growth: they’ve been “relentless” in driving down costs, and many are now still profitable at Aeco prices under $2.00/mn Btu.

Peyto Exploration CEO Darren Gee says cost-control is in his company’s DNA – it’s been doing it so long, and has been so successful in working close to the bone, that it’s now recognised as an industry leader in low-cost, high-margin operations.

“Running a lean, tight operation, with very high levels of ownership and control, along with facility ownership and a concentrated, sweet production base with no associated water production all contributes to this advantage,” Gee wrote in the May edition of his monthly President’s Report for shareholders. “Add to that a continuous focus on grinding costs out of our business and that’s how we maintain that advantage over the industry.” 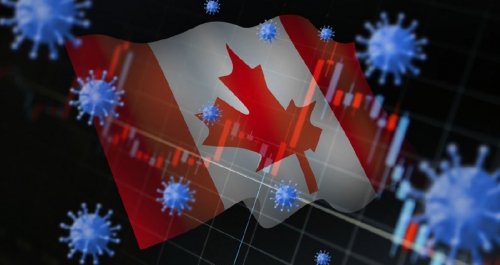 Earlier this year, when news of Covid-19’s spread beyond China began to leak out, Gee and Peyto saw what could be coming and began to stockpile completion equipment and chemicals ahead of anticipated supply chain disruptions that might come with lock-downs and border closures. Combined with higher power costs due to extreme cold in January, Peyto’s operating costs rose to  C$0.39/’000 ft3equivalent (ft3e) in Q1 2020 from C$0.35/’000 ft3e a year ago – an increase of about 11% – while its netback fell to C$1.27/000 ft3e, the lowest in its 21-year history; that, and an C$80mn impairment on reserves valuation, brought a Q1 loss of C$67.7mn – Peyto’s first quarterly loss in 15 years.

“It was a bit of a tough quarter, but we managed to make it through intact and we’re looking forward to some improvement for the rest of the year,” Gee told analysts on Peyto’s Q1 conference call May 13.

Other producers fared somewhat better in the first quarter. Tourmaline cut operating costs by 15% in Q1 2020 versus Q1 2019, Seven Generations Energy trimmed its operating costs by 8%, while ARC Resources cut its Q1 operating expense to C$4.40/boe from $5.24/boe a year ago.

Even with the Q1 speed bump, Peyto’s Gee remains confident in the rising fortunes of Canadian natural gas through the rest of 2020, he said on the conference call.

“We’re hopefully through the worst of it now, with respect to both the pandemic and perhaps some of the commodity market disruption, and hopefully we’re on the recovery side, slow as it may be,” he said. “The bright spot for natural gas obviously is that as we take oil off-line because we’ve got too much in storage, then the associated gas comes off and we’re short gas in North America.”

And he’s optimistic that being short on gas will finally lead to some more constructive gas prices in Canada, not just now but for at least a little while to come.

“We’re a gas company, with 85% of our production focused on natural gas, so all of that is very good for our cash flows and makes us quite a bit stronger,” he said. “We’re looking forward to getting through this summer and into next winter, when we can enjoy even stronger gas prices.”