Gas trade between the US and Mexico is evolving as new infrastructure continues to come online. While the Covid-19 pandemic has proved to be a setback – as it has elsewhere – on the whole the gas trade has stayed relatively resilient and flows from the US to Mexico have reached record highs. The trend is set to continue with further pipeline capacity additions on their way, driven in large part by growing gas demand from power generation plants in Mexico.

A further significant development in the US-Mexico gas trade picture will be the liquefaction of US-sourced gas on northern Mexico’s Pacific Coast for onward shipment to Asian markets. The plan, being developed by US-based Sempra Energy, has various hurdles to overcome before it can be realised, but there is relatively high confidence that it will come to fruition.

The gas trade between the US and Mexico received a major boost last year with the start-up of the Sur de Texas-Tuxpan pipeline in September 2019. The 800-km pipeline runs almost entirely under the Gulf of Mexico, from South Texas to the Port of Tuxpan in Mexico. The pipeline has a capacity of 2.6bn ft³/d, and its start-up increased Mexico’s natural gas import capacity by 40% – allowing it to take advantage of low-cost US gas supplies. 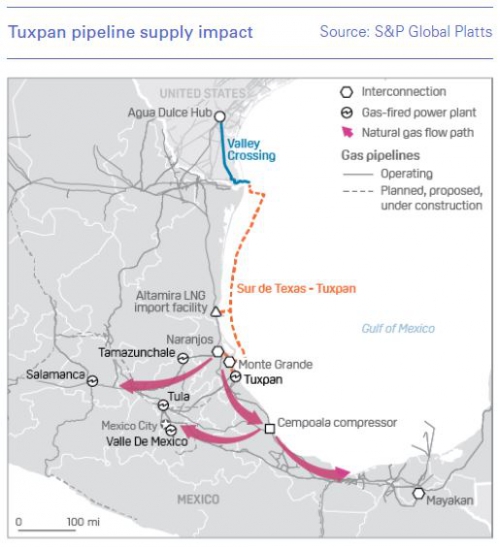 This has gone some way towards displacing Mexican demand for LNG imports, notably at the Altamira terminal on the country’s Gulf Coast.

“That was a big moment for the Mexican gas market because in short, it meant a shift in the primary sources for the eastern and northeastern regions,” a Mexico gas analyst at Genscape, Ricardo Falcon, told NGW. “With [Mexican utility] CFE being a major offtaker, this was a big move towards a more dynamic Mexican Gulf corridor in terms of pipeline infrastructure,” he said.

More pipeline infrastructure linking the US and Mexico has followed, though like the Sur de Texas-Tuxpan project, other projects have also suffered delays.

Falcon said that most of the pipelines had not come on line as expected for structural, non-technical challenges or other risks, and not just because of Covid-19.

Given its far-reaching impact, including on energy projects, it is not surprising that Covid-19 caused a drop in gas flows from the US to Mexico earlier this year. Independent Commodity Intelligence Services (Icis) estimates that US-Mexico pipeline flows dropped by around 1.5bn ft3/d from late March to mid-April, from a peak of near 5.9bn ft3/d to a low of around 4.4bn ft3/d.

However, flows have been quick to rebound, and RBN Energy analyst Jason Ferguson told NGW that US exports to Mexico had recently risen above 6.3bn ft3/d, which he noted was a new record. “August exports are up 0.5bn ft3/d versus last year,” he said. “It does appear there was an impact from Covid-19 earlier this year, as year-to-date exports are up only 0.175bn ft3/d.”

Despite this setback, however, gas trade between the two countries continues to expand. And a further increase in cross-border gas flows is expected when the final section of the Wahalajara system goes into service. The northern Tarahumara pipeline segment is already online and delivering gas from the Permian Basin into Mexico. Meanwhile, start-up of the southern Villa de Reyes-Aguascalientes-Guadalajara (VAG) segment has been delayed, even though construction on the pipeline was completed earlier this year. The delay has been attributed to a dispute between anchor customer CFE and pipeline builder Fermaca, with no news as yet on its resolution.

Once the VAG segment is online, gas will be able to travel all the way from the Waha Hub in Texas to Guadalajara, potentially displacing LNG imports at the Manzanillo terminal on Mexico’s Pacific Coast.

James Fowler, Americas energy market development manager for Icis, told NGW that depending on when the final segment comes online, he would expect cross-border gas flows to rise by at least 300-400mn ft3/d. “The idea would be that once you have the Wahalajara pipeline completed, you'd be able to replace LNG imports with the gas pipeline imports from the US,” he said.

Genscape, for its part, also considers the start-up of the system in full to be significant. “Once Wahalajara comes online, which is something we believe could happen this year, that could be another change of the game,” Falcon said. He warned, however, that there was a downside risk. “The longer Wahalajara's lower leg takes to come online this year, the less impactful it may be,” he said, explaining that a delayed start-up would face off potentially lower demand from both power generation and the industrial sector during the colder season in particular.

There is also potential for yet another game-changing development for US-Mexico gas flows – the liquefaction and export of US-sourced gas from Mexico – in the not-too-distant future. Sempra is proposing to convert an existing LNG import terminal on the Pacific Coast in Baja California to liquefaction under its Energia Costa Azul project. However, in the wake of Covid-19’s impact on the global LNG market, the company has postponed its final investment decision (FID) on the project, with a deadline for this now uncertain, having previously been pegged for the second quarter of 2020. Start-up had been scheduled for 2023 before the latest delay.

Sempra’s Mexican unit, IEnova, also still requires an export permit for Energia Costa Azul. However, Reuters reported in late August, citing sources familiar with the matter, that the Mexican government had asked IEnova to commit to another LNG export facility in the Port of Topolobampo before it would issue the export permit.

Sempra told NGW that it continued to “work closely with local authorities as well as the highest levels of the Mexican government on advancing the permit process”. The company said that as it had offtake and engineering, procurement and construction (EPC) contracts in place, it was ready to move forward with an FID subject to receiving the export permit.

Falcon noted that a government push to secure a commitment to the Topolobampo export project was not surprising, if it was true, and would not be the first time a similar initiative had been put forward. “The reality is that you see this almost every year, and that's just because the government realises that at some point it over-contracted capacity to secure supply to major combined cycle power plants,” he said. “Of course, demand dynamics change and with Covid-19 that was more evident. What they're trying to do is just to work around that market reality and find new outlets to eventually send gas out of Mexico.”

Fowler noted that as well as being considerably less advanced than the Energia Costa Azul plan, a new facility at Topolobampo would be harder to justify given the cost of a greenfield development and the recent collapse of LNG prices amid a global oversupply.

There is a good deal more confidence, meanwhile, that Energia Costa Azul will go ahead, he said: it is “just a matter of time… it obeys different incentives. In this case, it will be more of an integration of a market that is more mature, I would say, and I'm referring to the upper part of Baja California.”