Gail Gets Creative with LNG, Power

India’s biggest gas transportation and marketing company Gail will be marketing 9mn metric tons of LNG in the current financial year which ends March 31, 2018 compared with 8.5mn mt the year before. The year after next the company is expected to market 9.5mn mt of LNG, its CEO BC Tripathi told journalists May 23 in Mumbai.

Gail imported 55 cargoes (or 3.5mn mt) of LNG last year, which is likely to rise to 60 cargoes this year, while next year the number of imported LNG cargoes is expected to be 60. The 55 LNG cargoes that Gail imported (through spot purchases as well as short and medium terms deals) last year were over and above the LNG that it gets from Qatar. India’s biggest LNG importer Petronet LNG has a long-term deal with Qatari RasGas to import 7.5mn mt/yr of LNG,of which almost 5mn mt/yr goes to Gail. Late 2015, Petronet LNG and RasGas signed a revised deal.

However, Tripathi said from next year some of these 55 LNG cargoes will come from the US. Gail has an agreement to buy 3.5mn mt/yr of LNG from Sabine Pass on a FOB basis for 20 years. It also has a second 20-year deal with Dominion Resources for 2.3mn mt/yr of LNG. Out of the total 5.8mn mt/yr LNG that is contracted, Gail has already sold about 0.5mn mt, so from next year the company will get a little over 5mn mt/yr of LNG. The supplies are expected to begin in 1Q of next year (which is 2Q of calendar 2018). 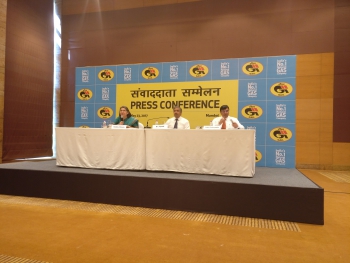 In order to keep down the cost of its US supplies, Gail has entered into a swap deal to sell some of that LNG. Tripathi said under the agreement, Gail will get 15 cargoes or about 0.8mn of LNG from a trader and in return the company will sell 10 cargoes or about 0.6mn mt from Sabine Pass next year. The idea is to trade US LNG in exchange for supplies shipped from projects closer to home.

Tripathi said the 1.967-GW Ratnagiri power plant was producing just 500 MW of power and its 5mn mt/yr LNG import facility was grossly underutilised at just 1.5 mt/yr in the absence of a breakwater to shield the port from high tidal waves. He further stated that the project is being demerged by separating the power and LNG units. Gail will have about 70% stake in the demerged LNG unit while NTPC will control the power unit. The new LNG unit will become a Gail subsidiary eventually.

At the moment Gail and utility National Thermal Power Corporation (NTPC) each have a 25.51% stake and the rest is owned by the Maharashtra government, financial institutions and banks. The company was set up to take over and revive the assets of Dabhol Power Company. RGPPL owns an integrated power generation and an LNG facility.

The capacity utilisation of the LNG unit is expected to rise from 1.5mn mt/yr to 2.5mn mt/yr in the near future, Tripathi said, and once the breakwater is in place, it will rise further, to 4mn mt/yr. The company will spend about rupees 10bn ($150mn) building the breakwater for which a contract will be awarded soon. Last year the LNG plant regasified 16 LNG cargoes, Tripathi said.

Gail reported its results May 22 and said that its net profit in March quarter (4Q) dropped almost 69% to rupees 2.6bn. The fall was due to impairment of investments of rupees 7.83bn in RGPPL. The quarterly profit without the impact of the above impairment is rupees 10.4bn, which is higher by 25% year-on-year.

US expects increase in gas-fired electricity