From the Editor: LNG market strength sustained [Gas in Transition]

Record prices for spot LNG in Asia-Pacific emerged in the fourth quarter of last year, owing to a combination of factors: a recovery in Asian LNG demand, unexpected production outages, delays at the Panama Canal and reduced LNG carrier availability.

The expectation then was that the sharp spike in prices would dissipate, owing to a surplus of production capacity, primarily the result of the rise of US LNG and dampened demand growth, the result of the Covid-19 pandemic.

Yet other factors have intervened, some structural and some seasonal, and spot LNG prices have maintained not record levels, but sustained high prices in comparison with 2020.

Even in India, which remains hard hit by the pandemic, cargoes which could have faced cancellation have been flipped back into the wider Asian market at a profit, signalling that far from a resurfacing of the LNG glut, demand is for the moment outstripping supply.

Meanwhile, Norway’s Hammerfest LNG plant remains out of action, and is expected to remain offline until March 2022, while LNG trains have been down in Australia and at Russia’s Far East Sakhalin plant in the first half of the year. In-fill drilling off Trinidad and Tobago has not resulted in the volumes of gas expected and this has left Atlantic LNG short of feed gas.

At the same time, new market dynamics are playing out in Europe, the most salient difference from last year being the price of carbon. Carbon prices have been on the rise since 2018 when it became clear that reforms to the system would do much to remove the huge surplus of allowances that had built up. Since the end of 2020, they have been on an even sharper upward trajectory, reaching over €50/mt in May, increasing the incentive for gas burn at the expense of coal.

One of the key factors behind this in the short term has been a combination of higher electricity and heat demand in Europe, coupled with low renewable energy output, which drove up demand for gas, thereby increasing demand for carbon allowances. In addition, neither Norway nor Russia stepped up pipeline supplies, meaning European buyers faced a shortage of gas in a market in which LNG cargoes were being pulled into Asian markets. 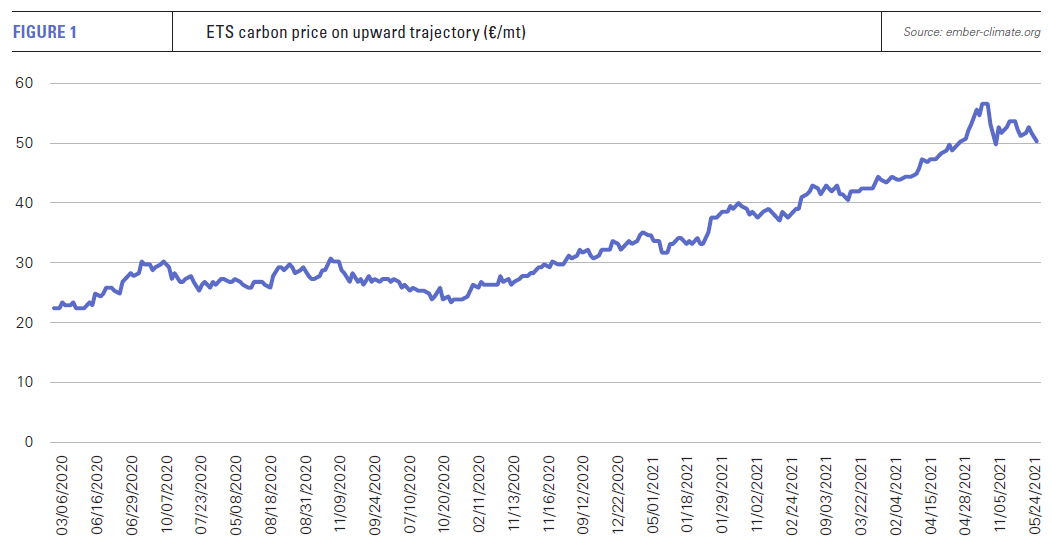 European gas storage levels are low as a result. April was cold in northern Europe, but wind generation was weak and both hydro and nuclear availability limited, again pushing up gas burn, supported by the effervescent carbon price. This combination of factors meant that April and May saw very low gas injections, leaving storage levels well below the norm.

The weather always has a huge impact on the LNG market, not just at the time of unusual warmth or cold but in the lagged effect on storage volumes. Europe’s low tank levels will need to be refilled over the summer and this should support LNG prices.

LNG spot prices thus look set to outstrip last year’s dismal Q1-Q3 performance by some margin, although capacity returns and a potential slowdown in Asian demand in the fourth quarter could still bring them off the boil. However, while European gas inventories are low, so too are commodity and manufactured inventory levels in general. Global restocking of international supply chains should be a key driver of economic activity this year.

Another important factor is the timing of the completion of Nord Stream 2, which US President Joe Biden has decided not to actively oppose.

Head of the energy committee of Russia’s state Duma, Pavel Zavalny, said in May the pipeline could be finished in one to two months and two Russian pipelaying vessels are working on the roughly 90 km of pipe still to be laid in Danish waters, while around 15km needs to be completed on each of the two lines in German waters. The pipe sections also need to be tied into above-water infrastructure and the completed pipeline will need to undergo design verification.

Zavalny’s expectation looks optimistic, and it is not impossible that the pipeline’s opponents come up with new inventive ways to delay the final stages of construction or operation. However, even with these caveats, Nord Stream 2 looks likely to move towards completion over the summer, potentially coming on stream in the fourth quarter. Completion will allow Russian gas supply to be more reactive to north European gas demand and reduce Europe’s appetite for LNG, leaving Asia as the primary driver of demand and prices.

Next year could see the re-emergence of weak LNG spot pricing. The critical factor is likely to be the weather. First the heat of summer could drive forward an already strong outlook for LNG demand in China. Five Chinese provinces have warned they could face power shortages as homes and businesses ramp up their air conditioning amid post-pandemic economic recovery. Second will be the severity or otherwise of the northern hemisphere winter over 2021/22.

But while the weather remains as unpredictable as ever – maybe more so – 2021 looks likely to be at least a supportive interlude for an LNG market technically in surplus and one which brings the rebalancing of supply and demand closer.

Morgan Stanley, for example, now sees a capacity shortfall as early as 2023 and the need for another 60mn mt/yr of new project sanctioning to meet demand expectations by 2030. Meanwhile, US developer Tellurian’s announcement of an offtake agreement with trader Gunvor for its proposed Driftwood LNG plant is a sign that the outlook for new project sanctions is improving.