Despite the limitations caused by Clovid-19, this year’s FLAME conference, which took place November 2-4 in Amsterdam, lived up to expectations. The central theme was the impact of energy transition for the gas and LNG sectors, including transition to low-carbon gases.

Even though FLAME paralleled the first few days of COP26, the Glasgow summit’s shadow was looming throughout the conference. Accelerating transition to a more sustainable and resilient gas industry became the central theme. 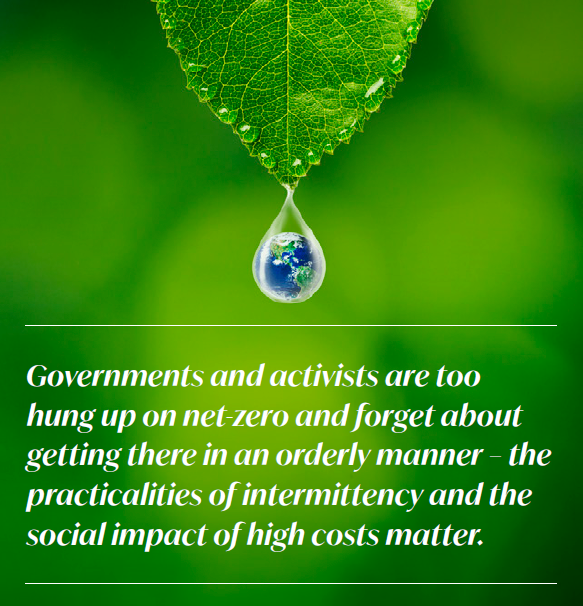 In a keynote speech, Sir Dietrich Helm, professor of energy and economic policy at Oxford University, delivered some sobering thoughts and warnings about what this means.

The often-repeated statement that “renewables are good – gas is bad” is too simplistic. Intermittency challenges this.

Producers of fossil fuels reduced production last year due to Covid-19 and are holding back now leveraging their advantage for higher prices. Any claim that they were unprepared for the rapid economic recovery this year or that there are insufficient reserves do not stack up.

Europe has to think seriously about security of energy supply. It needs reliable and affordable gas supplies – repeatedly the spot market produces spikes and high prices. It is not surprising that long-term contracts are coming back on the agenda

Increasing renewables and reducing gas for flexible power generation will lead to increased price volatility, as clean energy technology has not scaled-up yet to the level required to replace gas. EU’s targets translate to 16% less gas by 2030, but replacing gas with green hydrogen is costly and will take time.

Politicians need to be honest about the cost implications of dealing with climate change. Their actions are making energy transition a costly and volatile process. 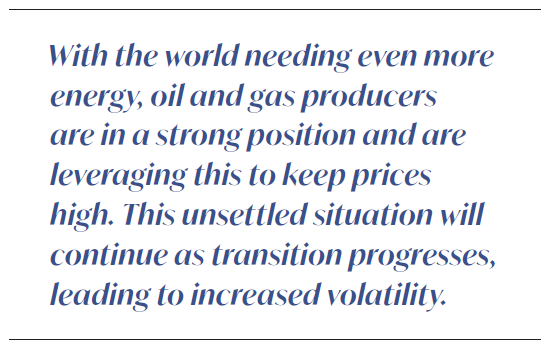 Nevertheless, COP26 is accelerating decarbonisation. Industry must respond by reducing the carbon and methane footprint of gas/LNG if they are to retain their transition fuel status.

Governments and activists are too hung up on net-zero and forget about getting there in an orderly manner – the practicalities of intermittency and the social impact of high costs matter. Consumers are price-sensitive and will react if prices stay high. It is essential to do cost-benefit analysis of each and every solution, otherwise it could backfire.

Security of energy supply does not come automatically. As we go further and further into renewables, intermittency will become more challenging until new technology becomes available to address it. We need the energy market to be reformed accordingly and the right regulatory framework to deal with it. Clear policy and regulations are essential if we are to avoid future disruptions.

In a keynote speech, International Energy Agency’s (IEA) chief economist, Laszlo Varro, said natural gas has a very important role to play as a partner to renewables in supporting orderly energy transition. Gas is important for energy security until renewable generation scales-up and hydrogen is ready to play a serious role. But the gas industry must move fast to low-carbon.

Varro said that gas is important for energy security as of today, but the elephant in the room is methane leakage. However, batteries are playing an increasingly crucial role and as capacities increase inevitably they limit the role of gas as back-up to renewables in power generation.

There is increasing pressure on oil companies to curtail investment in new oil and gas, coming from investors, environmental and climate activists and governments. The IEA supports this, saying that current, reduced, oil and gas investments are now broadly in line with net-zero requirements.

Available oil and gas reserves are sufficient to cater for future demand as this adjusts in response to pledges made at COP26 – the world does not need more oil and gas. The IEA agrees and does not expect the level of future investment to change significantly.

Indeed, majors like ExxonMobil and Chevron do not plan any significant increase in capital spending in the foreseeable future, beyond the current massively reduced levels – down by 60%-70% compared to the highs of 2014 – and that must also include increasing spending on low-carbon projects.

Varro said the European majors are influenced by their investors who are pushing them further towards clean energy and net-zero by 2050. US majors rely heavily on external finance and are also under increasing pressure to decarbonise while maintaining high dividends.

Gas buyers and consumers were traumatised by high prices last winter and they see a repetition now, but worse. This is not helping natural gas. It encourages users to look for alternatives and it accelerates the drive for energy efficiency.

With the world needing even more energy, oil and gas producers are in a strong position and are leveraging this to keep prices high. This unsettled situation will continue as transition progresses, leading to increased volatility.

Green hydrogen, bioLNG and other green technologies will have to become price-competitive against other fuels if they are to gain energy market share. That will take time, giving a lease of life to natural gas and LNG. The expectation that most future natural gas demand will be in Asia, displacing coal and enabling renewables.

Optimism seems to prevail with LNG producers. Most expect LNG demand to carry on growing, with some forecasting by as much as 50% by 2040, with Asia being the main destination. But this largely ignores COP26 and net-zero commitments and their impact, even though increasingly customers are asking for green LNG.

High gas prices in Europe are due to ‘sentiment’ caused by the currently very low liquidity in gas supply. However, the expectation is that they will drop down to normal levels by spring, especially now that Gazprom has started filling European gas storage. Prices are responding to this, already over 40% lower from the highs seen early October.

Without a plan to deal with this, it risks becoming a recurring theme during energy transition, causing disruption and price volatility.

Russia sees its gas exports growing in the future but mostly to Asia in the form of LNG – about 150mn mt/year is being planned. But Gazprom is not planning any new pipelines, except to China.

Combined with Qatar’s plans, new LNG from the two countries – some of the cheapest in the world – is likely to capture any new markets, providing stiff competition to any other projects still at the planning stage.

Gazprom said it has met its contractual obligations in Europe in full, and that in fact from January to October supplies to its European partners actually increased by more than 13%.

Gazprom stressed that it prefers long-term gas contracts, saying that they make the market balanced and predictable, and warned against hub-indexation and short-term trading. The current gas market in Europe, driven by spot-pricing, is not good for sellers or buyers.

Gazprom is not interested in record low or record high gas prices and prefers a balanced and predictable market that only long-term contracts can provide. It needs this to justify and support its long-term investment plans.

Oil-indexed LNG contracts have come down to 10-11% Brent. The conference was told that given the energy crisis and high gas price volatility, future contracts are expected to be based mostly on oil-indexation. Despite the current energy crisis, competition for long-term contracts remains intense due too high level of supply.

Financing new gas/LNG and hydrocarbon projects is becoming increasingly difficult and expensive as pressure on fossil fuels grows. The cost of capital is up. Based on data produced by Goldman Sachs, the “threshold of projected return that can financially justify a new oil project is now at 20% for long-cycle developments, while for renewables it has dropped to somewhere between 3% to 5%”.

Goldman Sachs says this year will mark the first time in history that renewable power will be the largest area of energy investment.

Natural gas has a role in energy transition, particularly in Asia, displacing coal and enabling renewables. But price volatility and uncertainty about the future make investment decisions that much more difficult.

With the world needing even more energy, oil and gas producers are, at least for now, in a strong position to use their leverage and this will increase as energy transition progresses, but without careful planning the risk is that this could backfire, leading to further volatility and market loss.

Natural gas must step up environmentally. The gas industry must focus on carbon and methane leakage reduction. It ignores these at its peril.