China’s potential demand for hydrogen as it decarbonises swathes of smokestack industries from steelmaking to cement means a combination of hydrogen production pathways – including natural gas-based blue hydrogen – will need to be developed in parallel to ensure sufficient supply. 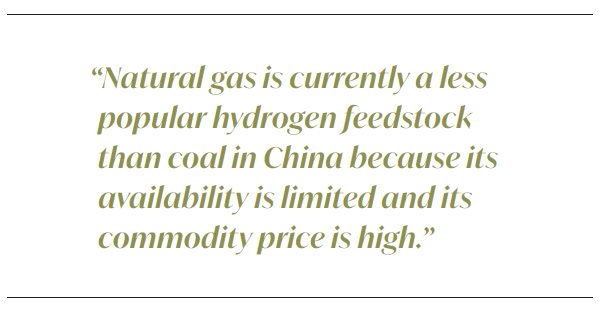 China’s hydrogen demand is anticipated to grow modestly this decade, increasing by 11-20% before accelerating in the 2030s. The size of the Chinese hydrogen market could grow to about 90mn metric tons/year by 2060 – which is when Beijing has pledged to reach net-zero emissions – and make up around 6% of the country’s final energy consumption, according to the International Energy Agency (IEA).

The China Hydrogen Alliance (CHA), a government-backed industry group, is more bullish in its forecasts as it predicts demand could reach up to 130.3mn mt in 2060 – of which 100mn mt will be green hydrogen. The CHA expects blue and green hydrogen supplies to dominate China’s hydrogen supply mix by 2035.

China produced 34.66mn mt of hydrogen in 2021 that mostly came from unabated coal and natural gas, or as an industrial byproduct. A long-term industry development plan released in March 2022 calls for green hydrogen output via water electrolysis powered by renewable electricity to reach 100,000-200,000 mt/yr by 2025. This compares with a goal of 1mn mt/yr by 2024 proposed by the European Commission in 2020, while the more recent RepowerEU plan is targeting 10mn mt/yr by 2030.

Like other prospective hydrogen economies, China has zeroed in on green hydrogen as the main production pathway for the zero-emission fuel in the long term. But the central government and domestic industry are also working in the interim to transition from grey to blue hydrogen, as much more renewable capacity needs to be in place and the intermittency of wind and solar energy needs to be resolved before significant volumes of green hydrogen can be realised.

Blue hydrogen technologies are still in the early stages of development, but are expected to mature by 2030 and play an important role in China’s path to carbon neutrality. Hydrogen and carbon capture, utilisation and storage (CCUS) are set to play important and complementary roles in meeting China’s pledge to peak CO2 emissions before 2030 and achieve carbon neutrality before 2060, the IEA and the Administrative Centre for China’s Agenda 21 said in a joint report released at COP27 in Egypt last month.

China is the only country in the world that produces hydrogen from coal at significant scale, with the dirtiest fossil fuel supplying 21mn mt of the 33mn mt produced domestically in 2020 and emitting 360mn mt of CO2 in the process, according to the IEA.

Steam methane reforming using natural gas is the other main means of dedicated hydrogen production with output reaching 5mn mt in 2020 – equivalent to a 15% share. The remaining 7mn mt originated as an industrial byproduct of several processes, including coal-coking in steelmaking, chlor-alkali electrolysis in chlorine and caustic soda production, and dehydrogenation.

Coal’s dominance of the Chinese hydrogen supply mix contrasts with the rest of the world. Natural gas supplied almost 47% of global hydrogen production last year, nearly equivalent to the combined share of 27% for coal and 22% for oil, according to the International Renewable Energy Agency.

Natural gas is currently a less popular hydrogen feedstock than coal in China because its availability is limited and its commodity price is high – underlined by the spike in European gas prices this year that has pushed green ahead of blue in the hydrogen queue. The main consumers of natural gas-derived hydrogen are the ammonia, methanol and oil refining industries.

But there is scope to increase the share of blue hydrogen going forward. China is investing heavily across the gas value chain – from upstream E&P to regasification terminals and cross-country trunk lines – as it looks to the cleanest-burning fossil fuel to decarbonise its energy structure while renewable capacity is ramped up. Chinese gas demand is not expected to peak until 2040 at 650bn m³/yr, according to researchers at state-controlled CNPC, the country’s biggest gas supplier.

At the same time China’s biggest gas suppliers are ramping up their CCUS development, which could be paired with fossil fuel-based hydrogen production routes. Equipping existing hydrogen production facilities with CCUS could be a complementary strategy to reduce emissions and scale up China’s low-emission hydrogen supply, which is essential if hydrogen is to play a meaningful contribution to China’s 2060 carbon neutrality goal.

For China’s NOCs, hydrogen and CCUS have plenty of synergy. Beijing is already leaning on its deep-pocketed oil and gas majors to prove out the technology and economics of CCUS. China will need to scale up its CCUS capacity by more than 400 times in the next four decades to 1.3 gigatons/yr of CO₂ by 2060, as a shift to cleaner energy sources and improved energy efficiency will not be enough to reach net-zero, according to Shell. 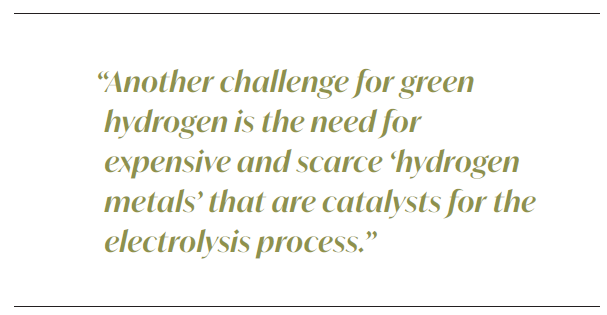 Sinopec, China’s largest refiner, brought its first megaton-class CCUS project online at the mature Shengli Oilfield in the eastern province of Shandong in late August. The facility will be able to sequester 1mn mt/year of CO₂ – equivalent to the annual emissions of nearly 600,000 economy cars. Sinopec aims to build another two pilot projects over the next few years in the nearby Huadong and Jiangsu oilfields. Last year, Sinopec captured 1.52mn mt of CO2 and utilised 308,000 mt of it for enhanced oil recovery (EOR), increasing oil output by 89,000 mt.

CNPC meanwhile announced in March it had started building a demonstration project in the Songliao oilfield with a designed capacity of 3mn mt/yr. This forms an early part of the major’s efforts to lift CCUS capacity for internal use to 3.7mn mt/yr by 2025, 25mn mt/yr by 2035, and then 100mn mt/yr by 2050.

Offshore-focused CNOOC signed a memorandum of understanding with Shell and ExxonMobil this summer to study the development of a world-scale offshore CCS hub in the southern province of Guangdong that could capture 10mn mt/yr of CO2.

The several synergies that exist between hydrogen and CCUS can be fostered to mutually reinforce one another, according to the IEA. For instance, revenue streams from CO2-EOR and other commercial end uses can support investment in CO2 capture at existing and future hydrogen plants.

And as hydrogen production from coal and natural gas offers low-cost CCUS opportunities, this application could serve as a stepping stone to CCUS deployment in other sectors. Industrial clusters and ports would be ideal places to develop shared transport and storage infrastructure for both CO2 and hydrogen.

Natural gas-based blue hydrogen could be a good middle ground between coal and renewable options. Producing hydrogen from natural gas with CCUS would cost 13-24 yuan ($1.84-3.40)/kg – more expensive than the 9-20 yuan/kg for coal with CCUS but considerably cheaper than 20-62 yuan/kg for hydrogen from green electricity.

Meanwhile, with a high carbon capture rate of 95% and low upstream fuel emissions, producing 1 kg of hydrogen using natural gas and CCUS would generate 2.6-3.1 kg of equivalent CO2 emissions. This compares favourably with 3.5-4.5 kg of CO2 equivalent produced per kg of hydrogen for coal-based production, and 29-31 kg for hydrogen produced with electricity from China’s current grid.

Benefiting the role of blue hydrogen in the medium term is that China will need decades to install enough renewable electricity capacity to produce the volumes of hydrogen needed to meet the demand projections of the IEA and CHA.

China’s installed capacity of solar projects and wind farms is expected to reach 4,810 GW by 2060, Shi Yixiang, a member of the hydrogen energy technology expert group for the National Key R&D Plan under the Ministry of Science and Technology, said at a recent international hydrogen forum. 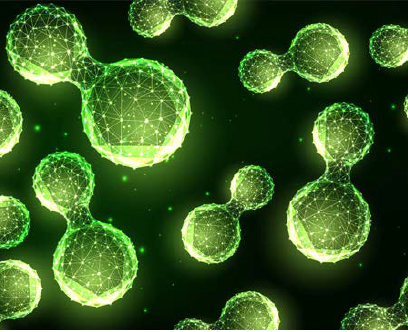 The installed capacity will be enough to generate 7,900 TWh/yr, and the surplus from this will be enough to produce 100-150mn mt/yr of green hydrogen, said Shi, who is also a professor at the energy and power engineering department of Tsinghua University in Beijing.

Another challenge for green hydrogen is the need for expensive and scarce ‘hydrogen metals’ that are catalysts for the electrolysis process – chief among them being platinum group metals (PGMs) including platinum, iridium and ruthenium.

Traditional alkaline water-based systems dominate the Chinese market for electrolysis-derived hydrogen, accounting for a near-90% market share. These systems are the most technologically mature and generally use cheap nickel-based catalysts instead of PGMs, so they have lower capital costs than a competing technology known as proton exchange membrane.