The costs of Southern Gas Corridor, including the development of the 16bn m3/yr gas field, Shah Deniz 2, have fallen from the original estimate of $48bn in 2013 to just $38.52bn today. The value may prove to be even lower when the project is completed next year.

This makes the breakeven price for delivery in the European Union much lower, allowing Azeri gas to compete against rival suppliers, officials told NGW on the sideline of the annual oil and gas exhibition and conference in Baku late May. 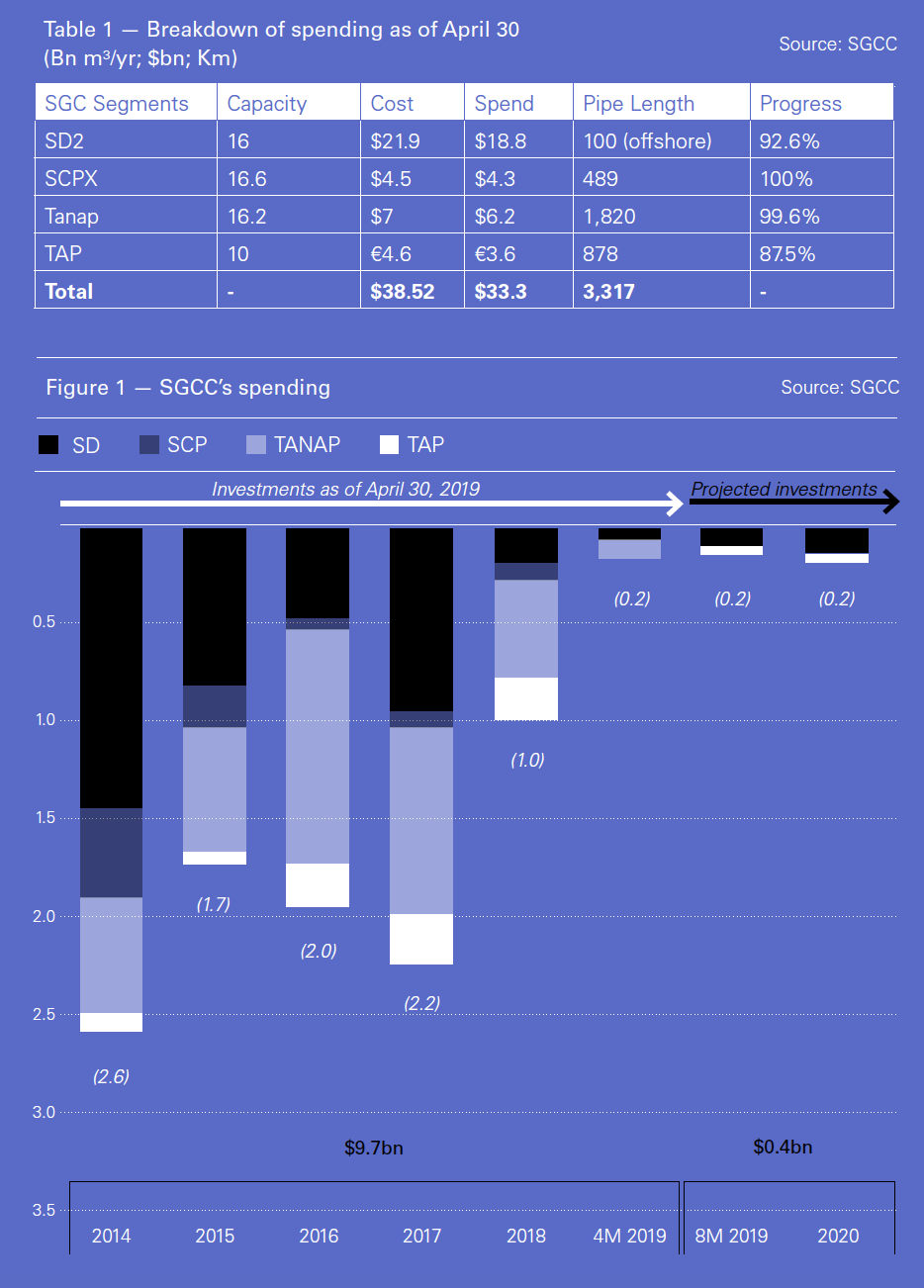 Azeri’s state-owned Southern Gas Corridor Company (SGCC) told NGW that as of April 30, the partners have paid in $33.3bn, or 86.4% of the total $38.52bn. The figure had previously been put at $48bn in 2013 and $40.42bn in mid-2018, but costs have since fallen. Shah Deniz stage 2 and the Southern Caucasus pipeline expansion (SCPX), which crosses Georgia, is almost complete.

The first stage (1,345 km) of the TransAnatolian Pipeline (Tanap) was completed last year and restricted gas flows to Eskisehir began in mid-2018.

The tests on its 476-km second stage, from Eskisehir to the border with Greece, started in February 2019.

Tanap CEO Saltuk Duzyol told NGW that both hydro and gas injection tests on Tanap phase 2 finished successfully on June 1. The whole Tanap is almost ready and gas flows to EU are expected to start in the second half of 2020.

“Tanap’s projected costs declined from $12.5bn to $7bn currently and the actual costs might even stand at about $6.5-6.6bn in 2020. It makes the project profitable and the transited gas to Turkey’s western regions, as well as the EU, will be competitive.”

Turkey will receive 6bn m3/yr and the remaining 10bn m3/yr SD2 gas will be delivered to the EU, of which four fifths goes to Italy. There is however a spur line being built from Greece to Bulgaria.

Last October an Azeri official told NGW that “there is no doubt that our gas will be competitive in the Italian market, even with our $250/’000 m³ price redline for EU”.

He said that the pipelines would need expanding or compressor stations added. Socar will need to limit its share of supply contracts to 50% to comply with EU market rules. 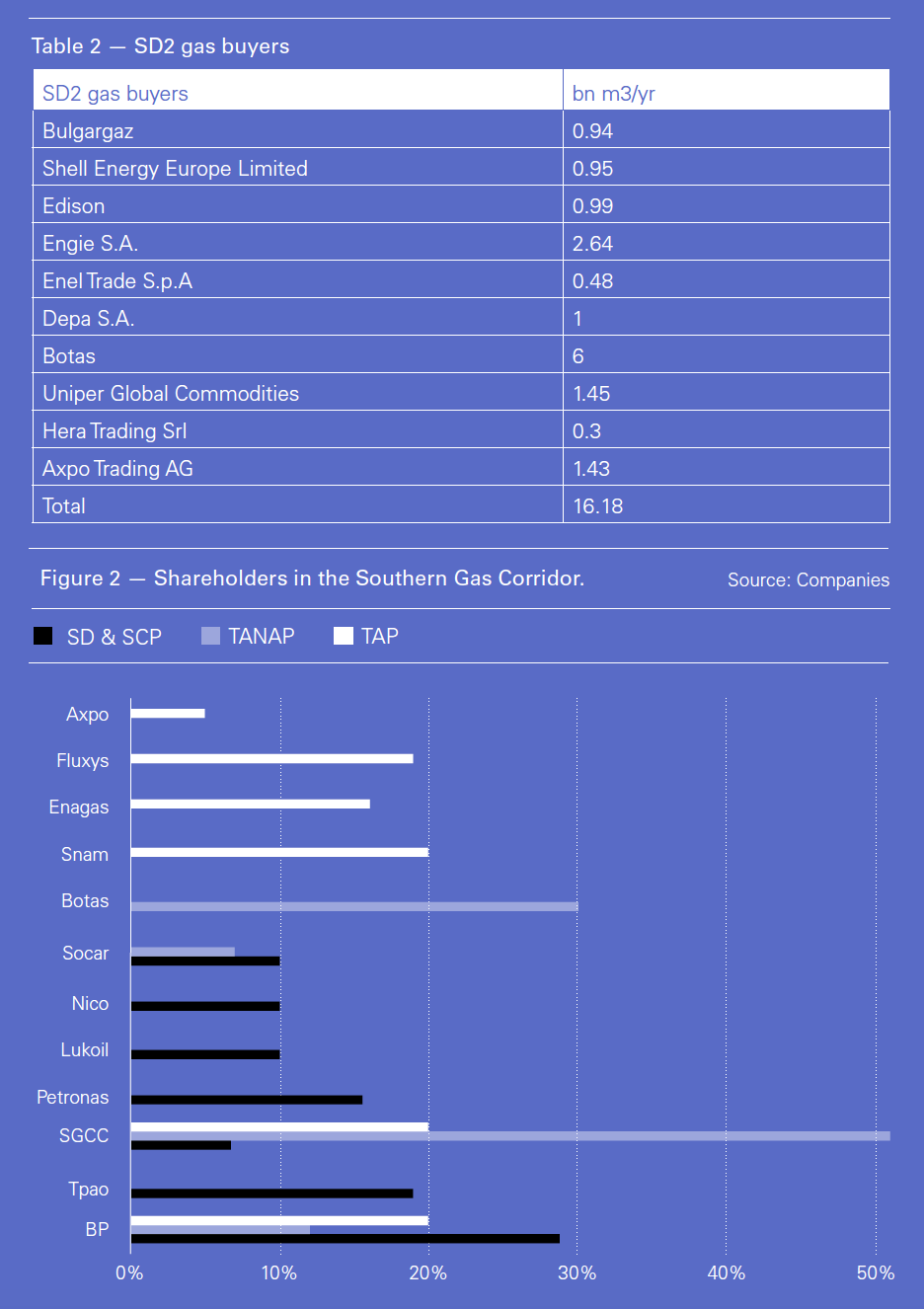 BP regional president Gary Jones confirmed preparations for expanding the SGC and told NGW on May 30 that the main source of gas for that would be Shah Deniz Stage 3, the biggest layer of the offshore field, which is estimated to contain as much as SD1 and SD2 together.

Azerbaijan has extracted 106bn m3 of the estimated recoverable 1.2 trillion m3 reserves in the three reservoirs. BP is the operator of project.

Jones said that an appraisal well was planned for 2020. “The process will take a year and after that we can evaluate the situation and decide on the development of project,” he said.

SD3 could be operational by the late 2020s. Over half of the SD1 reserves have been extracted and production will be zero by the early 2030s, by which time SD2 production will also start declining. Some of the SD3 production will offset the drop from SD2 output fall and the rest will be marketed to new buyers in Europe.

Azerbaijan has contracted to supply ten Turkish and European clients with 16bn m3/yr gas in total through SGC by 2045.

The TransAdriatic Pipeline is the last leg of the SGC and its current capacity is 10bn m3/yr. This is planned to double.

According to Europe’s Third Energy Package, Azeri gas can only account for half the SGC expansion and at least one extra source is needed for the rest of that (5bn m3/yr). However, SD3 is not the only source.

BP’s rival, French Total, which is developing offshore Absheron field, told NGW on May 29 that the drilling of one well is 90% complete. “Alongside vertical drilling (6,200 metres as of now), about 1,200 metres horizontal drilling was also done to evaluate the reserves: “Before, we had estimated about 350bn m3 gas in the reservoir and now we are sure that at least 350bn m3 gas are recoverable”.

The company said the vertical drilling would continue until it had reached 7,411 metres in October, making it the deepest well in Caspian Sea.

A joint venture equally owned by Socar and Total is developing the project. The negotiations on transporting the gas from the second stage through SGC are continuing.

Indonesia to start 27 midstream projects in Asia through 2025