Explainer: Why US Natural Gas Prices Have Increased During The Pandemic [GGP]

That makes sense: We’ve seen a large drop in global economic activity and therefore oil demand. Even with the largest coordinated production cuts in history from OPEC & cooperating countries like Russia, prices today are still well below pre-pandemic levels.

The pandemic additionally exacerbated the fall in global natural gas prices that began pre-COVID as new abundant supply entered the market at the beginning of the year. But as prices of gas in Europe and Asia dropped precipitously due to the pandemic’s outbreak, there was been a notable exception: in the US prices remained relatively steady and even rose at times. (Figure 1). (Oil and gas prices are back on the rise today globally due to the economic recovery, aided in the case of gas by typical seasonal increases in demand.) But the persistent (relative) strength of US natural gas prices has been an interesting phenomenon that, as we discuss in this post, could have important implications. 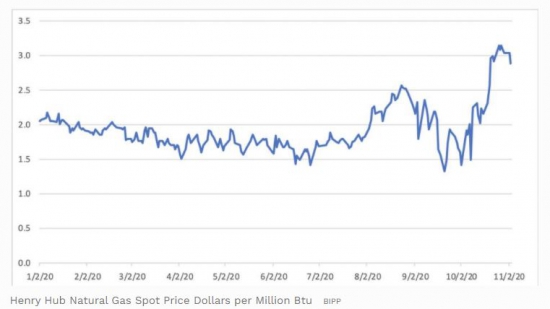 So what’s going on?

It’s not a demand story. While the pandemic hasn’t hurt natural gas demand as badly as oil, it sure had some negative effect. The IEA estimated earlier this year that natural gas demand would fall by 5%; here in the US, the EIA expects it to fall by about 2%. Lower demand should equal lower prices. Why not this time?

For answers look to supply…of oil!!!

The Energy Department expects US natural gas supply to fall more rapidly than demand this year but the fall in supply is not the same among all producers.

The shale revolution has made the US into the world’s largest producer of both oil and natural gas. It began with a natural gas focus but quickly expanded into oil shale plays as well. But it’s not a clean distinction: Most shale reservoirs have both oil and natural gas, although the mixture varies widely. Most shale gas plays have some liquids (natural gas liquids or NGLs) produced in association with gas-focused production operations. There are also places where natural gas constitutes almost the entire output. The latter have in recent years been the least profitable as generally returns on natural gas were much lower than returns on crude or NGLs. Before the pandemic, there were more than six times as many rigs looking for oil in the US than for natural gas. 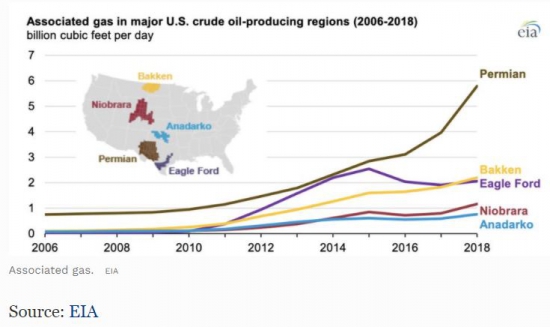 But as US crude production soared so did natural gas output as byproduct (Figure 2).

Since 2006, the share of associated gas in the total US production has roughly doubled (Figure 3). And, per EIA, in 2018 and 2019 most of the growth in US natural gas production came from associated gas.

When oil prices briefly went below zero in late April, US oil production collapsed. Unable to cover their operating costs, US producers shut in over 2 million b/d of production in May—the sharpest decline of US production ever seen.

And as oil production collapsed in the US shale plays, so did associated gas production. Overall US crude production fell by nearly 20% between March and June, while natural gas production fell by about 10%. Production of both has since recovered, but remains well below pre-COVID levels. As of August (the last full month for official data), US crude oil output remains more than 15% below March levels while the decline in natural gas output has moderated to about 5%. 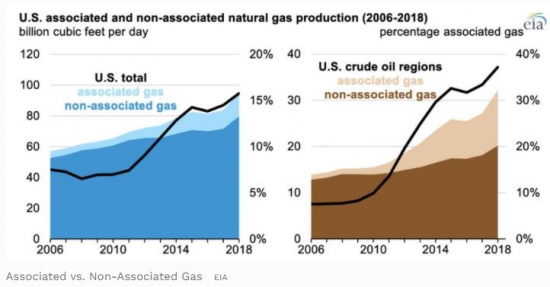 Indeed, the oil-focused shale plays (Permian, Eagle Ford, Bakken, and Niobrara) accounted for about 40% of shale-related natural gas production pre-COVID…but accounted for over 80% of the decline in gas production, according to the EIA’s monthly Drilling Productivity Report. In contrast, production in the main gas-focused shale play (“Appalachia” in the DOE data, largely the Marcellus) has remained relatively flat…and indeed is slightly higher now than it was pre-COVID.

How does this matter for natural gas prices? When gas is produced in association with oil, the economics are largely driven by the economics of oil. When oil prices do not support production, associated natural gas production also stops with little to no consideration of natural gas prices. Less gas production in oil shale plays could mean two things: 1) increase in production elsewhere; 2) higher prices. The latter is what happened in the US; indeed the gas-focused rig count has fallen along with the oil rig count since the pandemic broke out, as the increase in Henry Hub prices have not been substantial enough to justify additional drilling.

Meanwhile, even marginally higher domestic prices at the time when global prices collapse can erase whatever remains from competitiveness of US LNG exports against other suppliers. In fact, European spot prices of LNG have at times matched the level of Henry Hub prices here in the US. (The flexibility of US LNG contracts that allow for cancellations has dealt another blow.) As a result, US net natural gas exports fell by nearly half between March and August (again the most recent full month of official data), almost exclusively due to a collapse in exports of LNG (-54%). (Preliminary data suggests exports have begun to recover more recently.)

Another interesting wrinkle occurs on the spectrum of hydrocarbons between natural gas and crude oil—the NGLs mentioned above. These lighter liquids are generally separated from natural gas and sold because they tend to have higher value. But that’s not always the case…at times, ethane (the hydrocarbon closest to methane—C2H6 vs CH4) can be left in the natural gas stream, due to economics or processing bottlenecks, a condition known in the industry as “ethane rejection.”

And there is some evidence that ethane has been shifting between the oil & gas streams this year. Energy Department monthly data shows that production of both crude oil and natural gas is lower now than pre-COVID, yet ethane production in the country’s NGLs stream has actually increased—an indicator that some ethane volumes are being pulled from the natural gas stream (where it is counted as natural gas) and into the liquids stream (where it is counted separately). This also contributes to reduced natural gas supply in the US.

The pandemic has revealed that much of the cheap supply of US natural gas that we have gotten accustomed to depends on incentives for crude oil production. This may give us a clue for future domestic gas pricing dynamics. Without support from associated gas production, US natural gas prices may need to rise to incentivize gas-focused drilling. In the short-term, we’ve seen how this impacts the competitiveness of US gas exports, and, if prices are high enough, it could justify return of some of the coal generation that has recently been lost to cheap natural gas. Moreover, growing global focus on climate change and prospects for a potential decline in oil consumption and production (in the US and globally) may hold the same implications for natural gas pricing over the longer-term.

Mark Finley is the Fellow in Energy and Global Oil at the Baker Institute. Before joining the Baker Institute, Finley was the senior U.S. economist at BP. For 12 years, he led the production of the BP Statistical Review of World Energy, the world’s longest-running compilation of objective global energy data.