Expert Commentary: Potential and Benefits of Blue Ammonia as a Clean Fuel of the Future

According to the latest edition of the GECF Global Gas Outlook 2050 [1], the demand for natural gas is expected to increase by 50% from 3,950 billion cubic metres (bcm) in 2019 to 5,920 bcm by 2050. Therefore, natural gas would be an integral part of the world energy supply for the following years. Meanwhile, gas producers perceive natural gas as a vector of the energy transition, notably hydrogen, and thus in order to achieve long-term emission reduction targets, they have begun to consider hydrogen as a crucial fuel for sustainable global decarbonisation. In this regard, blue ammonia has also emerged as a prominent feedstock to boost a low-carbon economy.

In 2021, the GECF is developing its “Hydrogen Scenario” (HS) as well as “Carbon Neutrality Scenario” (CNS). Within these two scenarios, a wide range of energy majors’ pathways towards decarbonisation in energy transition, such as blue hydrogen, blue ammonia and the application of carbon capture, utilisation and storage (CCUS) will be captured. Initial results show that blue ammonia has a potential as a future fuel for the maritime and power generation sectors.

The GECF Member Countries are well-positioned to support a sustainable supply of blue ammonia. Currently ammonia is one of the largest contributors to Trinidad and Tobago’s (T&T) economy. The country boasts 11 ammonia plants with a total capacity of 5.2 million metric tonnes per annum, which positions T&T as one of the world's largest exporters of ammonia [2]. Moreover, as a new project, Russia and Japan are planning to jointly study the possibility of transporting blue ammonia produced in Russia's Siberia for utilisation at coal-fired power generation plants in Japan. The generated carbon dioxide (CO2) from the production process, will be captured and injected into eastern Siberian oil fields for enhanced oil recovery [3].

According to the Ammonia Energy Association, production levels of ammonia is currently approaching about 200 million tonnes per annum, out of which around 10% is traded on the global market. Almost 98% of the feedstock for global ammonia production is originated from fossil fuels, out of it 72% uses natural gas as a feedstock [4]. It should be noted that ammonia is classified either as ‘blue’ when it is produced from natural gas feedstock and the released CO2 is captured by CCS/CCUS technologies, or it can be labelled as ‘green’, when it is derived from electrolysis hydrogen produced by renewable resources [5, 6].

In the recent past, the continuing growth in gas production and LNG inflow has enabled gas producers and industries to expand the production of blue ammonia. Accordingly, the growth in ammonia production and its declining carbon intensity are in line with global targets of transitioning away from carbon-based fuels [7].

Currently, ammonia enjoys the advantages of an existing broad user-base as it is the basis of fertiliser production. Besides, well-developed infrastructure and large-scale ammonia production facilities are available around the world, making its production more feasible. Furthermore, recent advances in turbine engine technologies have led to the increased use of ammonia, either directly for combustion or indirectly by reforming it back into nitrogen and hydrogen as an industrial feedstock. Compared to hydrogen, ammonia does not require cooling to extreme temperatures and also features a higher energy density than liquid hydrogen, making it more efficient to transport and store. In contrast a significant challenge for hydrogen is the high cost of storing systems, the purity requirement, and transportation. These advantages suggest that ammonia could readily be a competitive option as a solution for decarbonising the energy-intensive industry, particularly in the power generation and transport sectors [7, 8, 9].

In spite of this, ammonia faces certain challenges, such as its toxicity and corrosivity, due to the production of nitrogen oxide (NOx), flammability, and combustion in traditional engine and turbine, namely high ignition temperature and low flame velocity [10, 11]. Moreover, at the moment, producing green ammonia at the commercial scale is expensive given the capital costs of the electrolyser plant for hydrogen production [12].

In this context, blue ammonia has emerged as one of the alternative fuels to support the shipping industry’s decarbonisation. Beginning January 2020, the shipping industry has been obliged to limit the sulphur content in marine fuels. The International Maritime Organization (IMO) set the goal to reduce greenhouse gas (GHG) emissions by 40% by 2030, and up to 70% by 2050, compared to 2008 levels, eventually fully eliminating all harmful emissions [13].

To meet IMO’s ambitions on reducing GHG emissions, there is a strong increase in demand for alternative fuels. Even though today LNG appears as one of the best options to achieve IMO’s goals, but blue ammonia has also been identified as one of the key solutions in the shipping industry’s pathway toward IMO’s decarbonisation objectives in the maritime sector, in particular over the longer-term period. 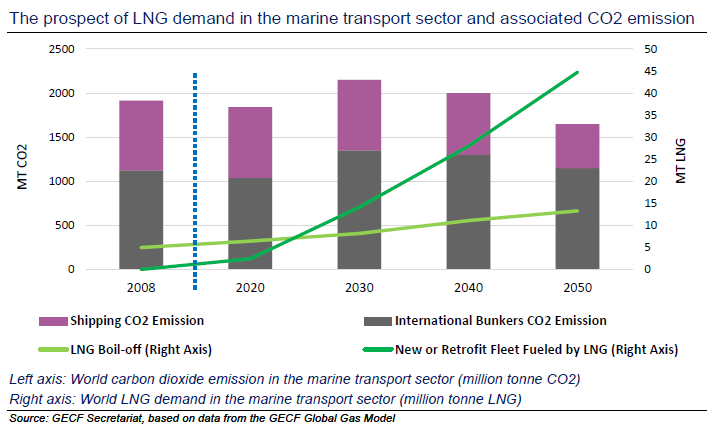 The other application of ammonia is in decarbonising coal-fired power plants. In this regard, Japan is aiming to increase the utilisation of ammonia to achieve the country's 2050 decarbonisation goal. As an opportunity for oil and gas producers, in September 2020, the world’s first shipment of blue ammonia was dispatched from Saudi Arabia to Japan, where it was used for power generation. Indeed, at a plant in Saudi Arabia, natural gas was used to produce hydrogen and then combined with nitrogen to create blue ammonia. The CO2 extracted from gas was captured and used at a methanol plant and enhanced oil recovery [14]. According to Japan’s Institute of Energy Economics, blue ammonia is critical to Japan’s zero-carbon emission ambitions to sustain the balance between the environment and the economy. About 10% of Japan's power could be generated using 30 million metric tonnes per annum of blue ammonia [15].

Meanwhile, yet another potential usage of ammonia rests in fuelling the traditional vehicles running on an internal combustion engine (ICE).

In conclusion, ammonia has the potential to play an important role in the transformation of the global energy system as a green and less-CO2 intensive energy source to meet the world’s growing energy demand. The power sector, which would undergo perhaps the most drastic structural shift in this transition when considering the global ”greening the energy industry’’ drive, could greatly benefit from utilising ammonia - whether blue or green - in meeting its emissions obligations.

The widespread adoption of this energy source in the energy industry requires significant investment in terms of research and development and infrastructure along with the introduction of adequate policies, which would bring to the fore its myriad advantages.

Accordingly, the GECF Member Countries, as the pivot of natural gas producers in the world. can penetrate blue ammonia markets for two reasons. First, they can benefit from vast natural gas resources in producing blue ammonia, which provides them with a competitive position in supplying the global demand. Second, they can leverage blue ammonia production as one of the carbon reduction policies in contribution to the low-carbon global economy. Therefore, it is projected that in coming years more GECF Members will optimise their ammonia production facilities for generating blue ammonia.