The Japanese Chiyoda Corporation is successfully demonstrating the use of a catalyst, SPERA, that promises to greatly facilitate international hydrogen trade. According to Setsuo Iuchi, Senior Vice-President in charge of hydrogen at Chiyoda, the development of the international hydrogen market is less about competition at this stage than about collaboration. “We have to build an integrated global hydrogen system linking continents and companies through state-of-the-art technologies” 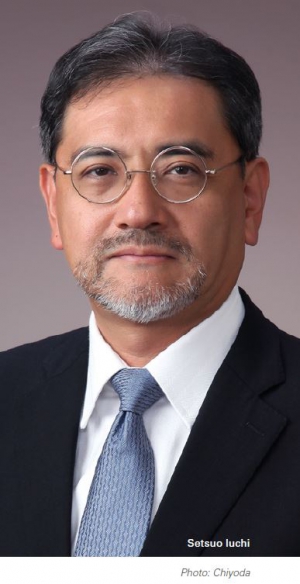 Chiyoda is a well-known name in the international hydrocarbon business. The Japanese company has been active as EPC contractor since 1948, building refineries, gas and LNG facilities, petrochemical installations and many other plants in over 60 countries. Although this business will remain a mainstay of the company’s activities, Chiyoda has been broadening its horizons, says Setsuo Iuchi, Senior Vice President in charge of the hydrogen business, in an interview with Gas Transitions.

In recent years Chiyoda has been awarded contracts to construct or invest in a large battery storage project in North Toyotomi, Japan, a solar PV and battery installation in Toshima, Japan, a bio jet and diesel fuel (“green oil”) plant in Japan, and in post-combustion flue gas CO2 capture technology, to mention just a few examples. And of course in the hydrogen space.

Chiyoda’s current eye-catching hydrogen technology is called SPERA. It is a high-performance dehydrogenating catalyst, which makes it possible to transport hydrogen safely and easily by ship or container in the form of methylcyclohexane (MCH). At this moment, the company is carrying out a demonstration project, in which MCH, produced in Brunei from natural gas, is shipped every week to the Mizue Thermal Power Plant in Japan, where it is used to generate electricity. (See box)

Setsuo Iuchi, who joined Chiyoda in 2018 after having worked for over 30 years at the Japanese Ministry of Economy, Trade and Industry (METI), explains that his company is increasingly active as a technology provider in addition to its contracting business. The times are changing and the company is changing with them, he says. “Over the summer many oil majors have announced ambitious greenhouse gas reduction programmes. All these companies are working on this, and not just in Europe. Here in Japan our Prime Minister Suga has just announced a national goal of net zero emissions in 2050, which I believe will create a big momentum to develop renewable energy and hydrogen.” 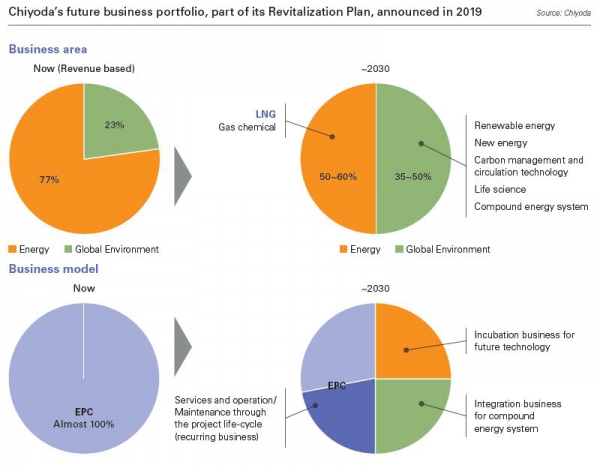 Financial investors are also putting pressure on business to drive the energy transition forward and the COVID-19 crisis is only adding to that pressure, says Setsuo. “We have not yet been greatly affected by COVID-19, but our EPC portfolio of future projects is shrinking for the moment. There is a lot of uncertainty in the market.” Chiyoda started a “Revitalization Plan” in 2019 after a troubled period. Part of the plan is to invest more in low-carbon energy and environmental technologies, working together with other players in the value chain, as well as governments and academia. “We are very open,” says Setsuo.

For Chiyoda, hydrogen is a big part of its new future, Setsuo adds. “It is not the only solution. We need all possible solutions. But it is one of the keys to make renewable energy supply stable. It is also very versatile. It can be produced from various sources. That makes it possible to produce it in large volumes. And it can be procured from various parts of the world, both from the traditional oil exporting countries and from new regions. So it enhances geopolitical stability.”

For Japan, putting efforts into hydrogen is nothing new. The country has been working on hydrogen technologies for decades in all parts of the value chain. Chiyoda too has a long history in hydrogen, notes Setsuo. “We believed hydrogen would be the key to the future more than 20 years ago. We also started developing catalysts back then to make this happen. SPERA was not born yesterday. We started research on it back in 2002. Now we have backing from the Japanese government to make it market-ready.”

Based on Chiyoda’s corporate philosophy “Harmony between energy and the environment”, Chiyoda has continued to develop various technologies and catalysts related to the process of oil and petrochemical industries as well as environmental protection, says Setsuo. “We are familiar with hydrogen in construction and maintenance of oil refineries. We are the largest contractor to construct industrial hydrogen production facilities for refineries in Japan. These experiences naturally led us to develop the new catalyst related to hydrogen.”

The demonstration project is proceeding very smoothly, according to Setsuo. He believes the successful introduction of SPERA will greatly facilitate the development of an international hydrogen commodity market. “The transport of hydrogen is not a simple matter. In Europe of course there is a large interconnected gas pipeline network which can be used to transport hydrogen. But we don’t have that in Asia. And if you want to import hydrogen from far away, pipelines are not an option in any case.”

The solution, says Setsuo, is to transport hydrogen in the form of MCH. “It is a very stable liquid, which can be transported and stored safely under a wide range of temperatures and pressures, over any distance. We believe this is what the world needs. It will be a catalyst for the hydrogen trade, literally and figuratively.”

SPERA is already starting to make waves, Setsuo says. In addition to the demonstration project, Chiyoda earlier this year signed a MOU with Singapore to support that country in its ambitious climate strategy. “They are very interested in using SPERA for utility, mobility, and other applications.”

Setsuo, who is intimately familiar with the thinking in the Japanese government, believes that the hydrogen market will develop faster in the coming years than many may imagine. “It has huge momentum across the world. All governments are keen on it.” Are we headed for a hydrogen economy, as some would have it? “Well, if major parts of society use it, we may call it a hydrogen economy. The Japanese government has used that term. But we look more broadly. The goal is net zero emissions. To reach that we also need to recycle carbon. So re-utilisation – the U in CCUS – is very important too.”

Although there are challenges across the board, the biggest one is probably cost, Setsuo believes. “Technologically, hydrogen is an established business. It needs to be scaled up to bring costs down. This does not only fall to the supply side. On the demand side too, it is crucial that the market is scaled up.”

What does all this imply for LNG and natural gas? Setsuo is convinced, like the Japanese government, that so-called blue hydrogen, based on natural gas in combination with CCUS, will be part of the future mix. “Natural gas will be a leading energy source for a long time. Even in the very long term, humanity will always need some hydrocarbons, even if only as a source of hydrogen and for the chemical industry. The key question for the sector is how natural gas can be utilized in an environmentally friendly way. We can develop new technologies to make that possible. That’s our goal.”