China’s natural gas vehicles (NGVs) – once touted as a future driver of domestic gas demand – are being edged out of the conversation on how to decarbonise transport by more popular electric vehicles (EVs), which are proving to be more cost-competitive and have snatched policy momentum away from NGVs.

China has the world’s largest fleet of passenger vehicles running on gas, with 7.32mn on the road in 2020, but development of the market has slowed significantly since 2014. Lack of policy support and shrinking economic advantages over other fuels have stalled consumer uptake and limited infrastructure expansion. 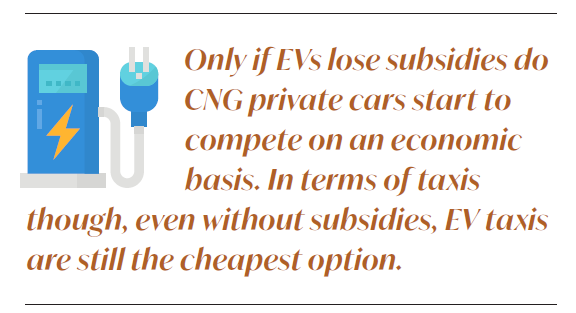 Passenger EV adoption has continued to accelerate while NGVs have lost ground. Passenger NGVs grew at a compound annual growth rate (CAGR) of 5% in the three years between 2017 and 2019, a fraction of the 76% CAGR enjoyed by EVs. In 2020, the Chinese compressed natural gas (CNG) vehicle fleet shrank for the first time in its 32-year history, by 100,000 vehicles to 6.62mn, according to a PetroChina-affiliated oil industry newspaper. By the end of 2020, China’s “new energy vehicle” fleet – battery electric, plug-in hybrid and fuel cell vehicles – had reached nearly 5mn, from less than 10,000 just a decade earlier.

Passenger NGVs accounted for more than 80% of China’s total NGV fleet in 2021 but less than 3% of the national passenger vehicle fleet. The fleet size expanded rapidly in the early 2010s, with growth rates above 40% during 2011-2014 – mainly driven by high gasoline prices – while provinces with a CNG-to-gasoline price ratio lower than 60% saw faster deployment of both NGVs and refuelling stations.

More than three-quarters of passenger NGVs are converted from cars that used internal combustion engines (ICEs). Both retrofitted and new passenger NGV additions have decreased since 2014, which has led to stagnant gas consumption since 2015 at around 10bn m³/yr. Consumers have gradually lost interest in passenger NGVs as they care more about the driving experience and other factors, rather than cost alone.

Passenger NGVs enjoy far less policy support at the national level when compared with EVs. The government’s prioritisation of EVs in terms of manufacturing supply chain and gas demand for sectors other than transport have created headwinds for the further development of passenger NGVs in the country.

Even in southwest China’s Sichuan province, which has one of the largest passenger NGV fleets, EVs are being rolled out quickly. The entire taxi fleet in Sichuan’s provincial capital of Chengdu will potentially be converted to EVs by 2025.

The total cost of ownership of private cars running on gas is slightly lower than for ICE vehicles, but higher than EVs at current prices. Only if EVs lose subsidies do CNG private cars start to compete on an economic basis. In terms of taxis though, even without subsidies, EV taxis are still the cheapest option. Passenger NGVs may only see growth in smaller cities where residents are more sensitive to cost and EVs have not penetrated the market yet.

Passenger NGVs are mostly retrofitted from originally gasoline-fuelled vehicles. They began to emerge in Sichuan due to the local dearth of oil supply but abundance of gas resources. The fleet gradually expanded into other gas-rich provinces such as Chongqing municipality and Shanxi province.

From 1996 to 2000 local governments began to pay more attention to NGVs as a cleaner form of transport and started to promote their use. In 1999, 13 ministries jointly initiated a pilot operation of gas-fuelled taxis and buses. The 2000s saw early adoption as passenger NGVs and refuelling stations began to spread nationwide on the back of China’s double-digit economic growth, with Xinjiang, Sichuan and Shandong spearheading development. 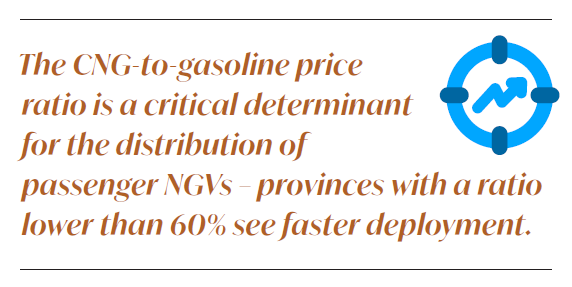 The Chinese NGV market’s growth accelerated sharply during 2011-2014 when the fleet size grew by more than 40% in the four consecutive years thanks to higher gasoline prices.

But growth has slowed significantly since 2015 amid receding policy support and slower economic gains. Consumer preferences also played a role as weaker performance and less trunk space made passenger NGVs less attractive. The allure of NGVs took a further hit in the winter of 2017-2018 when severe nationwide gas shortages left many passenger NGVs without access to fuel, hindering further expansion.

The CNG-to-gasoline price ratio is a critical determinant for the distribution of passenger NGVs – provinces with a ratio lower than 60% see faster deployment.

An additional headache for NGVs is that refuelling infrastructure buildout has stalled since 2014. China had some 5,800 CNG refuelling stations in 2019 that were all mostly concentrated in major NGV distribution areas.

But companies have started to trim their exposure to CNG refuelling stations as sales revenue declines. The number of and sales volume at CNG refuelling stations for major players such as China Gas Holdings, ENN Energy Holdings and China Resources Gas has stagnated since 2014 – when oil prices crashed and CNG prices increased due to China’s gas pricing reforms.

Compared to conventional refuelling and EV charging stations, CNG stations have a longer permitting process and tend to be located in more remote areas due to public safety concerns. Long queues at stations during winter and the slow growth rate has added to the arguments against further CNG infrastructure developments.

Both retrofits and new CNG passenger vehicle sales have decreased since 2014. In the golden days of the industry, car owners chose passenger NGVs for either cheaper fuel costs compared with ICE cars and or less range anxiety compared with EVs.

But these advantages have been eroded over the past several years by lower oil prices, improvements in fuel economy for ICE cars, and better range and reliability of EV models.

As previously noted, over 75% of passenger NGVs in China are converted from gasoline-fuelled cars. Conversion needs to be done in government-authorised workshops or factories, where engines will be retrofitted and a gas tank will be installed in the trunk. Turbocharged direct injection engines – widely installed in private cars – are not suitable for retrofitting.

Generally, owners only consider conversion if their cars have naturally aspirated engines, cost less than 100,000 yuan ($15,700) and travel more than 10,000 km/yr. Converting vehicles from gasoline to gas was most popular before 2014, mostly as a result of low CNG-petrol price ratios.

Similar to the reasons behind limited growth in refuelling stations, conversions began to drop when oil prices fell in 2014 and consumers became less interested in the smaller trunk space in passenger NGVs.

Passenger NGV gas consumption has remained around 9-10bn m³/yr since 2015 as the size of the passenger NGV fleet stagnated. Taxis and vehicles employed on Uber-like ride-hailing platforms represent more than half of the gas burned by passenger NGVs despite the smaller fleet size compared with private vehicles.

Widespread replacement of CNG taxis and ride-hailing vehicles by EVs has impeded further growth of CNG for transport consumption. Total transportation sector gas demand in 2020 is estimated to reach around 40bn m³ or equivalent to 12% of China’s total gas demand – a share that has remained relatively unchanged since 2009.

While this share has remained, the structure of gas consumption in the transportation sector has changed significantly. The share of gas demand by passenger NGVs declined rapidly while LNG vehicles have been filling the gap. Passenger NGVs consumed an estimated 10bn m³ in 2020 or 25% of transport’s total gas demand – a huge drop from 41% in 2014.

Two things have worked against the adoption of NGVs. First is that passenger NGVs still use ICEs, which is an area where some Chinese automakers lag behind international peers. By comparison China has a more comprehensive industry supply chain for EVs and is first less dependent on foreign counterparts.

Second is that despite growing domestic gas production in recent years, China’s gas import dependency has climbed to around 45% of total consumption. The concern among policymakers in Beijing is mass adoption of NGVs would further strain available gas supply and heighten energy security concerns.

Passenger NGVs did enjoy one main financial supportive policy in the early 2010s, but it was only applicable to new CNG vehicles classified as energy-saving by the central government, which was an insignificant portion of the total passenger NGV fleet.

Similarly, the fiscal incentive still enforced today only applies to these energy-saving CNG vehicles. Passenger NGVs have no national policy support in the form of targets, bans or limitations while there are at least 10 of these in support of EVs. China’s more tailored and comprehensive EV policies include purchase subsidies, tax exemptions and reductions, licensing, public procurements, deployment targets, and other infrastructure incentives.

The challenging outlook facing NGVs can be seen in Sichuan, the previous poster child for NGVs that is now electrifying its transport. The province had China’s largest CNG vehicle fleet until 2012 thanks to cheap local gas prices. But even low fuel costs have not protected Sichuan’s passenger NGVs, which are facing serious headwinds and threats of contraction amid Beijing’s ongoing push to develop the EV industry.

EV taxis have become a more popular consumer option with strong national and provincial support. In Sichuan’s provincial capital of Chengdu, CNG vehicles made up the majority of the taxi fleet until 2018. Since then city officials have pushed to replace CNG taxis with EVs with a subsidy of 42,000 yuan per vehicle.