Eurozone energy shock to have ripple effects on inflation and consumption

The energy crisis that Europe is currently facing is one of the big unknowns for the economic recovery, and the inflation path, in the months ahead. The spike in gas prices, accompanied by oil prices at a seven-year high, is causing a lot of uncertainty for households as it results in large question marks surrounding energy bills for this winter and possibly beyond. The outcome of this crisis remains quite uncertain, and the severity of the European winter will matter a lot, but currently futures contracts imply a rapid decline of prices over the course of 2022. Even if that’s the case, the impact on consumers is likely to last for quite some time, denting private consumption and keeping inflation at elevated levels.

Energy will push headline inflation higher for some time

Clearly, the impact of the gas price shock and higher trending oil prices is inflationary. The question is, just how much will prices rise? Looking at the relationship between consumer prices for electricity, gas and heating fuel and the natural gas spot price, we find some evidence that the impact of a gas price increase on energy inflation is more lagged than for oil price increases, indicating that the effect of the gas price shock could last for quite some time. This has to do with different pricing regimes across the eurozone.

A good illustration of this is the impact of the 2008 gas price shock, which resulted in elevated eurozone consumer gas prices for a protracted period. A year after the initial spike, market gas prices had fallen back to levels below the pre-shock readings, but consumer prices were still about 12% higher. This means that the impact of the gas price shock on consumer prices is set to last well into 2022, delaying the negative base effect of energy prices on headline inflation and complicating ECB policy. 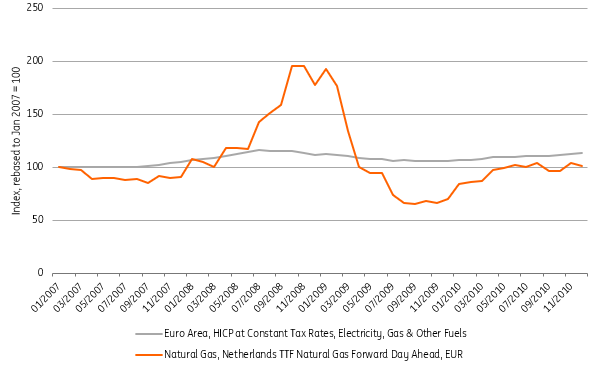 Those negative base effects from energy were expected to kick in by early 2022, but the soaring gas prices have mitigated the dampening effect of energy prices. Furthermore, oil prices themselves have risen more than forecast, so this has also pushed up energy inflation more than expected. From here on, we do expect a moderation in oil as well, but this effect will be dampened by elevated gas prices over the course of 2022. We expect the energy contribution to inflation to only turn negative in the third quarter next year. That contributes to a higher headline inflation rate than we initially expected for a large part of 2022.

The impact on consumption will come from a crowding out effect. When prices of household energy rise, this results in the share of energy consumption in total consumption rising in the eurozone. It’s interesting to note though that this is not the same for all eurozone countries. In fact, some countries actually see the energy contribution decline, indicating that households adjust their energy consumption when prices go up. In Finland, Belgium and Slovakia, for example, available data shows that people tend to wear an additional jumper during the winter rather than change their consumption patterns. For the eurozone as a whole though, the higher energy bills are likely to result in some crowding out effect of other consumption.

Because of this, we expect a modest reduction in our household consumption forecast for the winter months. While this will not derail the overall GDP recovery, we do expect a reduction of 0.2ppt to our GDP forecast for 4Q 2021.

A jump in electricity and gas prices results in a higher share of consumption of energy, implying a crowding out effect 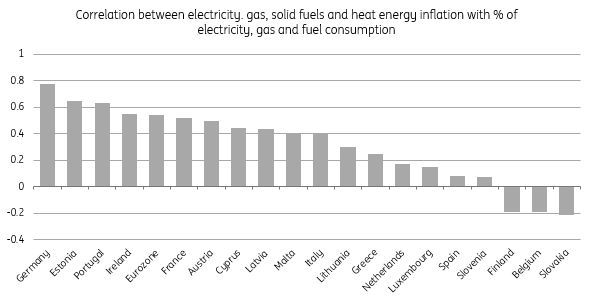 In our view, higher energy prices and their impact on inflation and private consumption are clearly stagflationary forces, though this is by no means a return to the 1970s. The ECB can keep the flower shirts and flared trousers in the wardrobe for now, but higher energy prices will clearly heat up an already heated debated at the ECB’s December meeting. A further upward revision to the ECB’s inflation forecasts now looks unavoidable. Yes, the more dovish ECB members can still call the inflationary period transitional but the transitional period is set to last much longer. At the same time, weaker private consumption could be used as an argument not to withdraw monetary stimulus too early. For the hawks, another upward revision to the inflation forecasts should be a welcome argument in favour of tapering. To some extent, the eurozone energy crisis could accentuate the rift between the doves and hawks and specifically between the ‘inflation is transitional’ and the ‘inflation will be structurally higher’ camps. To keep tensions at bay, a decision to start tapering earlier and more significantly than markets currently believe could be a good compromise.