European gas prices, like those elsewhere in the world, have been depressed over recent months. There had been some support for winter prices from the risk of an interruption to flows through Ukraine, which has encouraged high storage levels. But as of late December, the risk had gone and with the winter so far relatively mild, the support has gone. Prices have slipped close to LNG breakeven levels, despite recent crude strength. However, fresh US sanctions halted work on Nord Stream 2 December 21, which could hamper Russian imports later in the year, and may have helped Russia’s minds on the Ukraine transit deal.

The transit route for Russian gas to Europe via Ukraine is key to maintaining supply to the continent. In 2018, Gazprom delivered 80bn m³ – out of total sales to the EU of 198bn m³ – through Ukraine, which is about a sixth of the total market.

The threat to this flow propped up the European forward curve this autumn (in what has otherwise been a very bearish market), which has encouraged traders to maintain high storage levels. On November 20, for example, February was priced at 44.1p/th in the UK, almost 5p/th above the balance of November price of 39.5p/th, discouraging storage withdrawals. Similar spreads were seen in Europe, pushing German gas stocks up to 98.7% of available storage capacity in late November, compared with 83.1% a year ago, according to infrastructure group GIE.

Now that the transit deal seems secured, February prices have fallen back to just above 39 p/th (late December). At the time of writing, Russia and Ukraine had agreed to transit 65bn m³ in 2020 and 40bn m³/yr from 2021 to 2024, “on condition that, by the time of the reservation, there is a competitive tariff established by NKREKU [the regulator] that is recognised by the operator and that is equivalent to the level of transport tariffs that apply in central and eastern Europe,” according to the protocol. The higher 2020 total could reflect delays in Nord Stream 2. 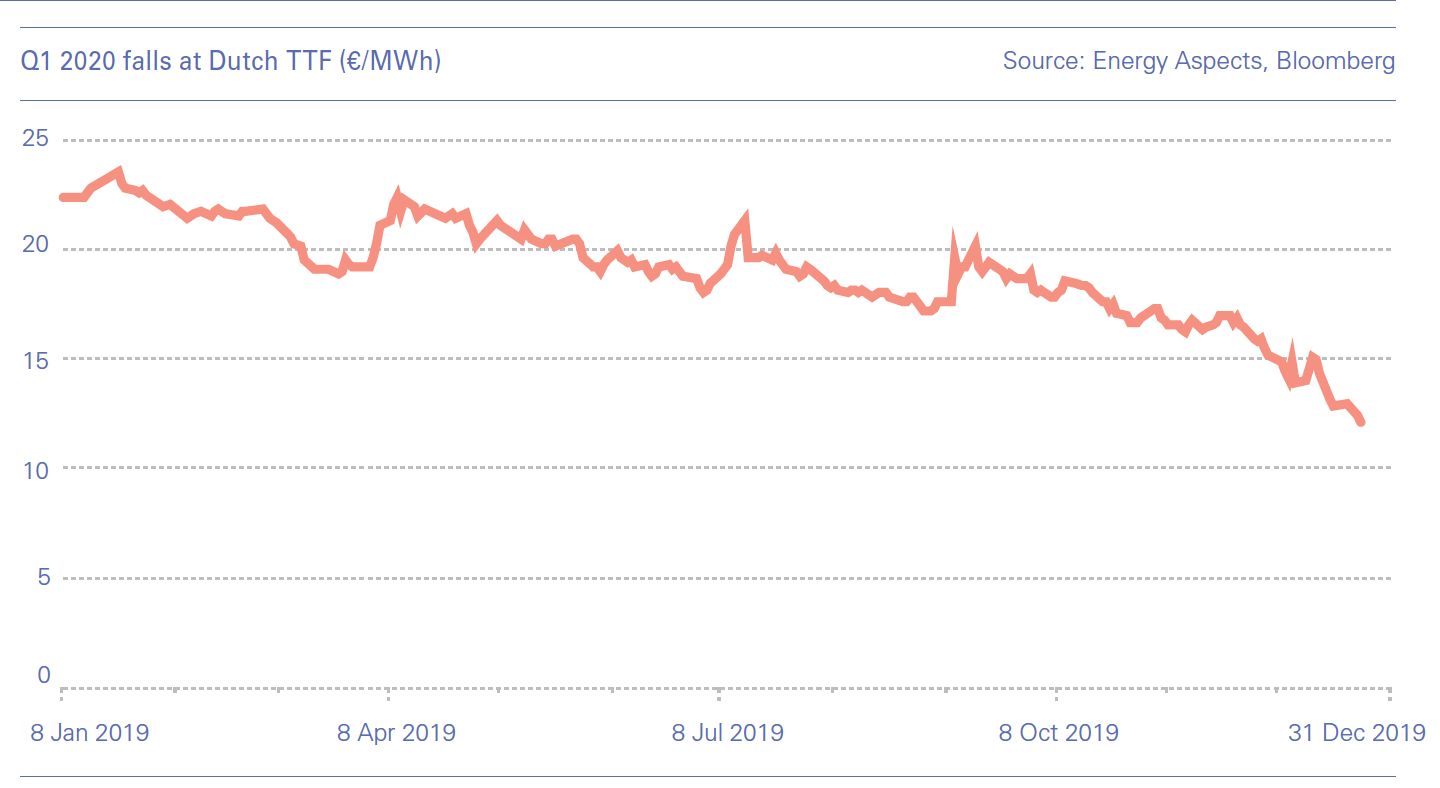 In the transit negotiations, Ukraine had said it wanted a 10-year 60bn m³/yr deliveries, while Gazprom was after greater flexibility, so the five-year lower commitment appears to be a compromise that should satisfy both parties. The high gas stocks and a weak price environment had weakened the Russian position, along with the threat of US NS 2 sanctions.

A tight schedule on unbundling under EU rules had worked against the Ukrainian position. The 65bn m³ for 2020 is higher than expected – Wood Mackenzie had estimated 30bn m³, although the consultancy noted this could rise depending on the commissioning date for NS2 and TurkStream.

With no Ukrainian interruption, the European market is likely to end the heating season with 45-54bn m³ of gas still in storage compared to an average of 40bn m³, depending on the severity of the winter, according to Woodmac. This has been worrying some suppliers as it would weigh heavily on prices – on top of high LNG availabilities, and current mild weather.

One trader said in early December: “The period to watch now is summer pricing… If colder weather proper doesn’t materialise in Q1 there will be one hell of a storage overhang at the start of summer. Out of the 11 LNG tankers to arrive by mid-month, five originate from the US. To balance things out [in future] it could be that NBP prices have to dip below the equivalent Henry Hub price to curtail those US cargoes.”

Aside from the Ukraine issue, European market fundamentals are very weak thanks to high LNG arrivals, made worse by exiting last winter with storage higher than average. The latest winter price falls have once again narrowed summer/winter spreads, which will undermine the profitability of storage, after some support this autumn. European storage played a huge role in balancing the global LNG market in 2019, but if stocks are even higher coming out of this winter, that might not be possible in 2020 – which would add to pressure on short-run economics of marginal suppliers across the world.

Swiss-based Allseas halted its pipelaying work on NS2 after the sanctions came into force December 21. The sanctions are attached to a wider defence spending bill, and target “vessels that engaged in pipe-laying at depths of 100 feet or more below sea level for the construction of the Nord Stream 2 pipeline project, the TurkStream pipeline project or any project that is a successor to either such project.” Those vessels and identified executives involved with those vessels could then be sanctioned.

Denmark had only given approval for NS2 to pass through its waters on October 30, which was followed by a four-week period for appeals, which ended on November 28 – allowing for an estimated 115 days of construction to begin on the 147-km section. After this approval, NS2 start-up had been expected in mid-2020, but the start date is now unclear. It will depend on Gazprom finding an alternative specialist pipeline laybarge, but had not commented to NGW on this by time of press.

The market reacted only modestly to the news, with traders aware that there are plentiful LNG supplies available to make up any shortfall: “Where is the make-up gas going to come from though? You guessed it – ship ahoy,” said one trader.

The sanctions came too late to affect the two 15.75bn m³ TurkStream pipelines as the offshore work on both of those was already complete. One of the two lines though is awaiting an onward connection at the Turkey-Bulgaria border, while the other is for delivering gas to Turkey only.

Continued large volumes of new LNG supply capacity, combined with weaker than expected Asian demand is maintaining an ample availability of LNG cargoes for Europe. Despite the high storage levels and weak fundamentals, LNG arrivals into Europe are still likely to rise in 2020, according to Woodmac.

Qatar is expected to remain the number one supplier, and Russian Yamal LNG number two. US supply is expected to catch up once the summer Arctic route to Asia opens, and as US projects continue to ramp up, the US is likely to overtake Russia and establish itself as Europe’s biggest supplier.

Looking further ahead, current record project sanctioning is likely to weigh on prices in the mid-2020s too. So far, the capacity of new projects given the go-ahead is 63mn mt/yr for 2019, beating the previous record of 45mn mt/yr in 2005. Woodmac expects another 60mn mt/yr in 2020, including Rovuma off Mozambique at 15mn mt/yr. Such high totals are likely to lead to another oversupply cycle in the mid-2020s, which will challenge high cost suppliers again, and may put some off going ahead next year.

Chinese tariffs on US LNG could also delay project sanctioning, making it particularly tough for major independent LNG export projects, and many analysts are less bullish than Woodmac.

On the demand side, Germany’s gas demand is rising, buoyed by the closure of coal-fired and especially nuclear power generation capacity (which is due to be phased out by 2022), as well as lower gas prices. Some gas-fired plants were previously mothballed, and in November it was reported that Germany’s Uniper was preparing to bring up to 3.5 GW of gas-fired power generation capacity back online, or almost a third of its gas-fired capacity, owing to high carbon prices and the nuclear closures.

The country imported/transited 117bn m³ in the first nine month of 2019, which was 25.6% up on the same period in 2018. Falling domestic output means Europe is producing less generally, outside Norway, leading to rising imports overall. Germany is also building at least two LNG import terminals over the coming years, although the first is not expected until 2023. At the end of November Qatar met with German officials to discuss the possibility of direct LNG sales to Germany and Qatari investment in an import terminal.

Demand elsewhere is proving less robust, however. In the UK, Spain and Denmark, new wind capacity is eating into gas-to-power demand, while a lack of cold weather has also depressed heating demand last winter and early this winter – leaving UK daily gas demand totals struggling to reach average over the last few months. That trend could accelerate as plans for more ambitious offshore schemes are announced.