European power prices rise on falling gas supplies, and the US deals with a heatwave and soaring demand

European power prices jumped as a result of lower gas supplies and renewed concerns for the winter balance.
Spot power prices have increased in tandem with European gas prices as supply disruptions are creating a tighter European balance.

The German baseload day ahead price has gone from an average of €177 per MWh during the first ten days of June to €300 per MWh at the time of writing.

Exports from Russia to Germany via the Nord Stream pipeline have dropped from a level of 167 million cubic meters per day (mcmd) at the end of May to 67 mcmd yesterday.

The lower supplies are reportedly the result of a technical issue in the pipeline’s systems but there is also speculation that the decline in exports could be politically driven.

Whichever is the case, the situation has added to the nervousness in the market.

European countries had already defined guidelines to gradually reduce their dependency on Russian gas supplies over the next ten years, but the current supply situation has pushed some countries to look for more short-term alternatives.

The German government is trying to extend the life of 10 GW of mothballed coal capacity until March 2024.

These plants have the potential of adding around 26.3 TWh of new electricity supply over the next six months, equivalent to 9% of the country’s total electricity generation.

By substituting 28.3 TWh of German gas power generation with more coal and renewables, the country has the potential to reduce 5 billion cubic meters (Bcm) of its gas consumption, equivalent to one-fourth of the gas consumed by the power sector.

The shift in the energy mix will not come without leaving a big environmental footprint.

Rystad Energy estimates that the higher coal power generation would result in an additional 10 million tonnes of carbon equivalent emissions released into the atmosphere.

The measure adopted by the German government will help reduce the need of gas-fired power generation but will not eliminate the need for this source of supply completely meaning that gas power will continue to be the price setter.

As a result, the German winter power contracts have increased substantially over the last few days to a level of €300 per MWh.

This level is even above the cost of gas power generation proving that the power market is pricing in an additional risk. 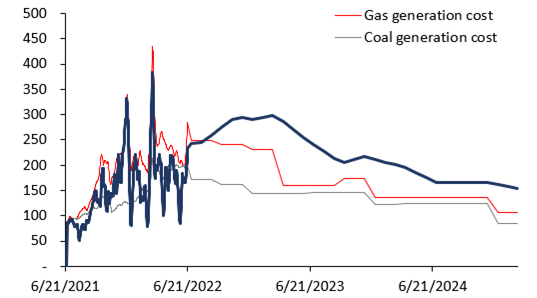 Most of the coal plants in Germany that are planned to be brought back online burn hard coal which was traditionally imported from Russian into Germany.

The main traded thermal coal benchmark (API2 specification 6,000 kcal/kg coal delivered into Amsterdam-Rotterdam-Antwerp) is currently trading at around $377 per tonne, up almost $250 per tonne since the beginning of the year.

Across the Atlantic, power markets are also under stress but for different reasons.

A heatwave affecting most of the Southeast United States has resulted in electricity demand reaching an all-time high.

Temperatures in Houston are expected to be close to 40oC during the coming days and could result in electricity demand in the ERCOT region increasing from the already high level of 1813 GWh on Monday to a new record of 1854 GWh.

Despite the record-high demand, power prices in the state have declined.

Gas prices in the Eastern United States have declined over the last week as an outage at the Freeport LNG facility is creating less gas demand for exports.

The Henry Hub day-ahead gas prices, which is the main benchmark for Southeastern US, dropped from $8.99 per MMBtu on 13th June to $6.60 per MMBtu.

This decline has reduced the cost of gas power generation which is also the marginal source of supply in the ERCOT market driving the decline in power prices.

However, the EIA forecasts that ERCOT prices could trend back to $90 per MWh during the summer.