European inventories are low and falling
We are moving towards the peak of winter with European gas storage at its lowest levels in at least a decade for this stage of the year. It's around 65% full compared to a 5-year average of around 82% at this stage of the year. Inventories are also drawing at a quicker than usual pace, and with heating demand set to only increase, the pace of draws will also probably pick up.
If we assume a similar pace of inventory declines as we saw last year from early December all the way through to the end of March, European gas inventories would fall to below 100 TWh by the end of the heating season which would be the lowest in at least a decade. If we assume a similar pace of withdrawals as the 5-year average, the inventory situation at the end of the heating season is not as bad but it's still historically tight, with inventories hitting around 200 TWh.
The prospect of inventories falling to extremely uncomfortable levels suggests that prices will remain well supported through much of the winter. If winter is warmer and there's less demand, clearly inventories will be at much more comfortable levels.
Either way, we will likely finish the winter season with lower than usual inventories, which should mean that going into spring and summer we'll see strong demand for injections. This suggests that while prices might come off from the elevated levels seen over the winter, seasonally they will still be high for much of 2022. 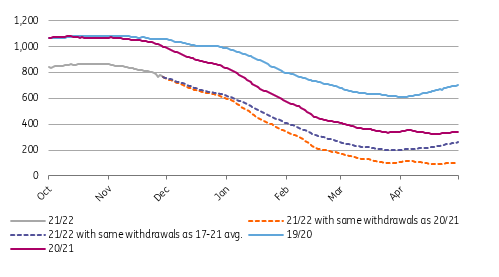 Russian gas flows still struggling
The key issue for Europe has been reduced Russian gas flows. The market will remain sensitive to how this situation evolves over the heating season. While Russian flows to Europe have improved from the levels seen in early November, they are still well below what we normally see year-on-year.
Quick approval of Nord Stream 2 may lead to a pick-up in flows. However, we think it is unlikely that this new pipeline will offer any relief to Europe over the winter. Already, the regulatory process from the Germans has been delayed. A start-up is more likely towards the end of 1Q22, which would be near the end of the heating season. While there is capacity via Ukraine that Russia could use, they appear to be limiting how much of this additional pipeline capacity to book.

Demand destruction prospects
One would expect that the higher gas prices we are seeing would lead to some demand destruction as end users move to cheaper alternatives or simply choose to reduce operations due to high prices. We have seen this with fertilizer producers, whilst some metal processors have reduced operations due to higher electricity prices (which have been driven by the gas market). On the power generation side, it makes sense for gas-to-coal and gas-to-oil switching. Asian spot LNG is trading at an oil equivalent of a little more than US$200/bbl, whilst TTF is trading at an oil equivalent of around US$180/bbl.
In Europe, looking at the dark and spark spreads for 2022, it is more profitable to burn coal than natural gas for power generation. This is even after taking into consideration the rally in EU carbon allowances. We already saw coal demand from the European power generation sector falling 4% YoY in 3Q21.
However, given that European gas inventories are falling at a fairly quick pace, we are not seeing the demand destruction that some might expect, or think is needed.

Asian demand remains robust
The LNG market has offered little relief to Europe, with robust demand from Asia and in particular China. Spot Asian LNG has largely traded at a healthy premium to European prices. Therefore, there has been a clear incentive to send cargoes into Asia. China’s LNG imports are up 23% YoY over the first 10 months of the year. China has also overtaken Japan this year to be the world’s largest importer. Chinese demand has been supported by strong industrial demand along with growing demand from the power sector. China’s ambitions for emissions to peak before 2030 should continue to prove supportive for LNG demand in the coming years.
Looking at the forward curve, the Asian market is at a premium to Europe all the way through 2022, with the premium being at its widest early next year. Therefore, do not expect the LNG market to solve Europe’s tightness. The region will need to continue to compete against Asia for spot LNG through 2022.

Limited growth in LNG export capacity in 2022
The robust demand growth that we are seeing in Asia is coming at a time when there is limited LNG export capacity set to come online over the course of 2022. We estimate around 12mtpa of export capacity starting up over 2022 which would take total capacity to around 477mtpa. This compares to additional capacity of around 24mtpa in 2020 and 42mtpa in 2019. In fact, between 2021 and 2025 capacity is expected to grow at an annual rate of 3% vs. 8% between 2015-2020. It is only towards the end of 2025 and onwards where we see some significant capacity growth coming through from Qatar.
This suggests that the LNG market should stay in a relatively healthy state through 2022. However, the clear risk to this view is a demand hit due to renewed Covid-related lockdowns or restrictions.

Power of need: Energy security in the Western Balkans