Until 2021, when the fourth phase of the EU’s emissions trading system (ETS) came into force, both oil and gas producers received a high number of EU carbon allowances for free. However, free allocation is now being phased out for gas, albeit not for the oil sector. The reason is that natural gas extraction is not included in the carbon leakage list for the 2021-2030 period which covers the fourth phase of the ETS.

Carbon leakage refers to the risk of energy intensive sectors relocating to other jurisdictions if the cost of polluting in the EU is too high. EU regulators consider the oil industry more prone to carbon leakage compared with gas. For example, an energy intensive oil refinery is considered more likely to be relocated overseas than a gas processing plant. 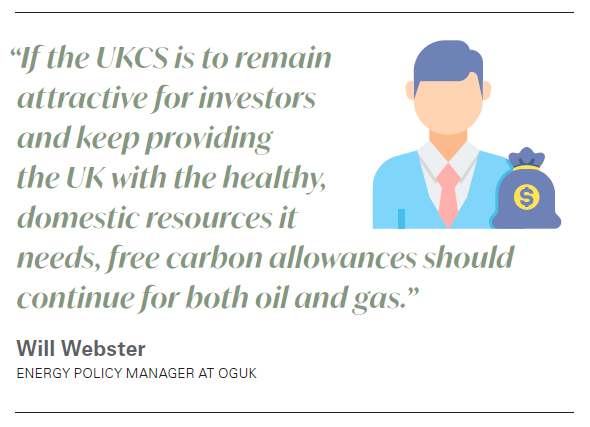 The same principles of free allocation apply to the UK ETS which came into force in May this year. This means gas producers, for example in the North Sea and the Black Sea, must buy more allowances to cover their CO2 emissions than was the case before. This could add considerable costs to operations and, in some cases, potentially lead to premature asset closures.

Stakeholders in the UK offshore industry, for example, have voiced concern that the phasing out of free allowances would squeeze profit margins for North Sea gas producers.

“If the UKCS is to remain attractive for investors and keep providing the UK with the healthy, domestic resources it needs, free carbon allowances should continue for both oil and gas,” Will Webster, energy policy manager at industry association Oil & Gas UK (OGUK) tells NGW. “Home production can ensure we remain in control of our own emissions and don’t increase our reliance on overseas, potentially unhealthy, production.”

The UK ETS is currently under review, and the industry is hopeful that policy makers will have second thoughts about phasing out free allowances for gas producers.

“We hope to see the reintegration of free allowances for gas once the UK ETS review has been completed,” says Webster.

This nevertheless seems doubtful. The UK ETS is modelled on the EU ETS and the potential linking of the two systems in the future means that the framework design is expected to remain broadly similar, including for rules on free allocation.

The phasing out of free allowances for gas producers comes at a time when carbon prices under the UK and EU ETS have reached new highs, trading above €50 ($59)/metric ton. The anticipation of fewer available allowances in the market, as the EU implements further market reforms to align the ETS with more ambitious 2030 climate targets, have propelled prices upwards from a range of €20-30/mt last year. Moreover, in the UK, polluters have to pay a carbon price floor of £18 ($25)/mt on top of the price of UK allowances. And in Norway, Western Europe’s largest gas producer, producers have to pay both the ETS price and a carbon tax. Companies on the Norwegian continental shelf pay a total of almost €97/mt of CO2 they emit and the carbon tax is expected to increase.

The free allocation of EU and UK allowances to oil and gas producers is considerable, but many companies are not transparent about the number of credits they receive. Others only share partial data. Austria’s OMV, for example, revealed in its 2020 annual report that it received around 3mn free allowances in 2020, or about 25% of the total number of allowances it needed to cover its 2019 emissions. Meanwhile Italian major Eni said it received 6.84mn allowances for free in 2020, or almost 40% of the allowances it needed. That means the company still had to purchase over 10mn allowances in the market at a cost of over €500mn based on current prices. Information shared in Shell’s 2020 results suggests it received free allowances with a value close to $400mn in 2020. However, the aforementioned companies did not break down the figures for free allocation to oil and gas separately.

The European Commission this week tabled a set of proposals that, if adopted by the other EU institutions, will see the supply of allowances decline. The linear reduction factor will, according to the proposal, be increased from the current 2.2% to 4.2%/year, meaning the number of new allowances supplied to the market each year will shrink faster. Other measures proposed by Brussels include phasing out free allocation for the aviation sector and reforming the market stability reserve so that it can take more surplus allowances out of the market.

The EC’s proposal for a Carbon Border Allocation Mechanism (CBAM) – or border tax – is more controversial. It means that importers of goods such as steel and aluminium from non-EU countries will have to buy certificates equal to the carbon price that would have been paid if the item had been produced in the EU. This is a move to address carbon leakage and, if adopted, means that free allocation of ETS allowances to energy intensive industries will gradually be phased out from 2026. Fewer free allowances will be a boost for demand. As will adding the shipping sector to the ETS, which the commission has also proposed.

Purchasing allowances in the market will be costly if prices rise in line with expectations. Many analysts expect carbon prices to stay above €50/mt in the foreseeable future and to continue to climb upwards as the reforms start to bite.

Higher carbon prices could help speed up deployment of carbon capture and storage (CCS) and other abatement technologies, but probably not at a significant scale anytime soon.

“The carbon allowance scheme will significantly contribute to industry meeting net zero by 2050 and other carbon reduction commitments. However, some production emissions will remain unavoidable – hence the move to reduce these at pace through our North Sea Transition Deal,” says Webster.

Of course, higher carbon prices are not all doom and gloom for the gas industry.

On the demand side, the surge in carbon prices – since the lows of around €5/mt in 2016 – has helped squeeze coal out of the power generation mix whereas gas has defended its market share. In the UK, coal accounted for less than 2% of generation in 2020 while gas had a share of 37%, according to data from the European Commission and Agora Energiewende. There are only four coal-fired power plants remaining in the UK and these are expected to be shut by 2024.

Yet there is a risk that the EC’s CBAM could force steel and aluminium producers out of Europe and reduce demand for natural gas in the industrial sector. In addition to steel, cement, iron, aluminium and fertilisers, electricity imports from non-EU countries – for example from Israel and Morocco – would also be subject to the CBAM levy. MEPs in the European Parliament have also called for oil imports to be included.

But the CBAM is still a long way from implementation and would also have to be compatible with WTO rules. James Whiteside, global head of multi-commodity research at Wood Mackenzie, said in a note that implementation of the CBAM could prove to be a “logistical nightmare.”

“There is little transparency around carbon emissions associated with products. Determining the country of origin of products can also be problematic. Robust certification schemes must be adopted – and adhered to – to effectively administer border taxes,” said Whiteside.