In a Nash Equilibrium the successive actions of gamers can lead to a stable equilibrium where any additional action would leave each gamer individually only worse off. In the negotiations over the future of Russian gas transit through Ukraine, the gamers are Gazprom and the Ukrainian state. The European Commission (EC) is playing the game’s honest broker, while also being hostage to a no-deal outcome.

The second round of tripartite negotiations between Gazprom, Ukraine and the EC were held on 19 September 2019. It reached an agreement of principle that in the future Russian gas transit via Ukraine should conform to European network codes of gas network operations. This agreement was a significant improvement over the existing 2009 contract that will expire at the end of 2019. It can be expected that the next round of negotiations, to be held at the end of October 2019, will be about tariffs and the duration of shipping commitments. Unlike the expiring 2009 contract, the next transit contract will be scrutinised while it is being negotiated. The EC’s role as a notary public for this contract will cement the relationship.

For Ukraine, adherence to European Union rules will bring legal clarity and operational benefits on matters such as balancing and nomination procedures[1]; most importantly tariffs will be based mainly on booked capacity rather than on actual flows. For Gazprom, signing a contract respecting EC rules ensures that the new transit contract will not be challenged later on its compatibility with the third energy package rules. It also implies that Gazprom will perpetuate its monopoly on pipeline exports of Russian gas to Europe, including on the Ukrainian route. Gazprom has been fighting off domestic challenges from Novatek and Rosneft on its monopolistic right to export gas from Russia by pipeline.

The progress and preparation on the Ukrainian side has been impressive. Technically, Ukraine’s gas transportation operator (GTS) has been modernising its compressor stations to allow them to work in reverse mode and import gas from Europe. The urgency of reaching an agreement on transit combined with European community pressure have kick-started the process of separating the GTS operator from incumbent Naftogaz.

Many questions remain on the rights and responsibilities of the new operator, but a series of resolutions from Ukraine’s cabinet of ministers point in the right direction. Still, the Ukrainian side still has much to achieve: its tariff offering must be compatible with EU regulation on form, “reasonable” on economics, and the new operator must be certified as independent by Ukraine’s energy regulator. This status must then be confirmed by the Energy Community Secretariat. That’s a tall hurdle to clear in the three months that are left to year’s end.

In Ukraine the temporary transportation tariffs in force since 21/12/2018 for cross-border flows are 100% capacity-based and it are differentiated by exit point but it has no commodity component. Naftogaz’s latest tariff offer is flow-based, with a volume discount: $3.21/000 m3/100 km for bookings of 60bn m³/yr and $2.56/000 m3/100 km for bookings of 90bn m³/yr. These amounts should be multiplied by 11 to approximate the cost of transit. These proposed tariffs are in the range of the one currently in effect under the 2009 Ukraine-Gazprom contract, but it has the merit of making explicit the ship-or-pay obligations.[2] In 2009 this crucial question was left vague and it became one of the central issues of Naftogaz’s arbitral claim against Gazprom.

Duration of the capacity bookings

The EU’s capacity allocation mechanism currently in force (2017/459 of 16 March 2017) is designed to maximise the use of existing capacities. Thus, it requires the offering of quarterly and monthly capacities, as well as yearly. Nothing obliges Gazprom to book yearly capacities, let alone over multiple years. However, the opposing argument can be made that for such a significant client as Gazprom, Ukraine’s GTS operator needs long-term visibility – say over ten years – to plan its investments. Gazprom will naturally try to commit to only short-term capacity bookings, hoping that the obstacles in the way to completing North Stream 2 will away wither eventually. As a reminder, the obstacles to NS2 are:

-        the need for Denmark to authorise the NS2 pipe to be laid in its territorial waters;

-        the risk of impounding NS2 assets as a result of court decisions in several European jurisdictions to enforce a net arbitral award of $2.56bn in Naftogaz’s favour announced February 28, 2018. An additional Naftogaz claim against Gazprom for $12bn announced on 9 January 2019 might add to the litigation risk;

-        the threat of US sanctions against companies participating in the NS2 project, including financing it;

-        the re-imposition restriction on Gazprom’s access to Opal by the European Court of Justice 9 days before the tripartite negotiations. This decision was a timely and significant boost to Ukraine’s negotiating position.

In the immediate, the main effect of the decision was the re-direction of flows from the southward Opal line to westward NEL pipeline. Transit flows via Ukraine seem to have benefited in absolute terms and as a percentage of Gazprom exports to Europe, but the persistent volatility of flows via Ukraine somewhat blurs that effect. 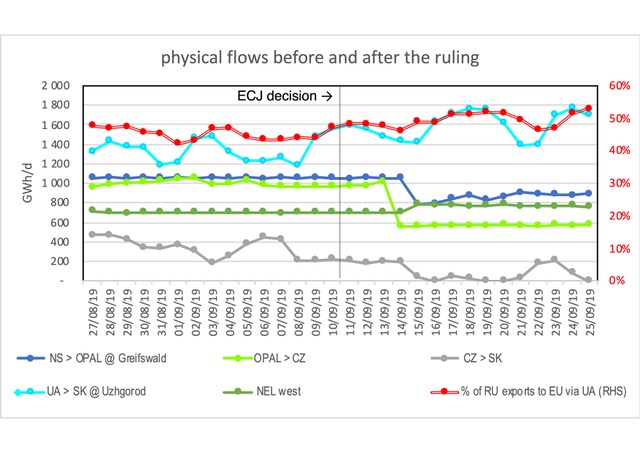 With the Turkstream project, a similar gas battle will play out on the southeastern front. The project will face some of the same challenges from the US Senate and from the EU. Turkstream’s intended effect is to obviate gas flows entering southeastern Europe via Ukraine and Romania. If one adds up capacities of gas that could enter Europe via Turkey and Bulgaria (17bn m³/yr), the amount is very close to the volume entering southeastern Europe via Ukraine and Romania.[3] Things will not be so simple for Gazprom, however. For one, the same solidarity principle that was applied on the use of Opal by Gazprom could also be applied to Bulgartransgaz, the TSO taking in these new gas flows.

The EU is also fighting back by supporting Projects of Common Interest of its own, including the 3bn m³/yr Interconnector Greece Bulgaria, which received regulatory approval from Greece in July 2019. Considering that Turkstream’s offtaker in Bulgaria and a line connecting to Serbia will not be ready before the summer 2021 and if Turkstream’s access to Bulgaria were to be curtailed based on the solidarity principle, a no-deal on Ukraine transit to southeast Europe would be costly to Gazprom on the long term. A supply disruption to Romania might encourage the country to finally modify its upstream legislation to attract investment in the development of its Black Sea reserves. Finally, there is no alternative to Ukraine transit if Russia is to supply gas to Moldova and to the Kremlin-supported breakaway region of Transdniestria.

In the classical prisoner’s dilemma, each prisoner has an incentive to snitch on his cell-mate to avoid the worst possible outcome, even though both parties would be individually better off if they co-operated to minimise total jailtime. In this gas game, both parties would gain from co-operating and reaching a long-term deal. The sunk costs of the delayed NS2 and Turkstream projects will strengthen Ukraine’s hand in the short term. In the long term, Russia probably expects that its bargaining position will be strengthened by its increasing share of gas supplies to Europe. Both parties need to realize that this is not a zero-sum game, and reducing supply uncertainty beyond the upcoming heating season is a prize worth having for all.

[1] For example on 21 August 2019, send-out at the main Russia-Ukraine interconnexion increased by 250 mcm, or 1.7 times North Stream’s capacity. It fell by back by as much the following day.

[2] The latest tariff proposal also represents a discount on  April 2016 transit tariff of $45/000m3 that Gazprom did not acknowledge.

Fluxys Profits Up on Belgian LNG

Italian Snam to Work with Saipem on Transition