On May 5, a draft document prepared by the European Commission (EC) about the future of natural gas was leaked to mass media and published by the biggest European news portal Euractiv[1]. According to the publicly available information, the EC envisages three possible scenarios for the energy transition each involving different scales of changes in the natural gas sector:

(i) “Gradual shift away from natural gas,” which entails continuing support to natural gas markets and infrastructure with a gradual integration of new gases;

(ii) “Green gas grid”, which foresees a phase out of funding of any traditional natural gas projects and an exclusive focus on renewable carbon-free gases such as hydrogen and biomethane;

(iii) “Full electric”, which foresees a large scale development of electricity and smart grids without any specific support to natural gas.

This is the EC's launch of a pivotal debate about the future of natural gas in energy portfolios. Interestingly enough, this debate was somehow anticipated in a Policy Brief co-authored by Andris Piebalgs, a former EU Commissioner for Energy (2004-2010) and myself, which was published by the Florence School of Regulation earlier this year.[2].

That document focuses on the Baltic States and emphasises the positive effects that regional gas market integration has had on a competitive transition to a low-carbon economy. The paper further describes successful gradual penetration of new gases into the existing natural gas markets in the Baltic area. In parallel, a new paradigm based on the three Ds –decarbonisation, decentralisation and digitalisation – will define the long-term path to carbon neutrality.

The core argument consists in a bottom-up approach to the European Green Deal with a focus on regional task forces for a more effective setting and implementation of the targets. The regional focus of the Policy Brief proved to be a useful exercise in working out the possible potential of, and impediments to, the European Green Deal. Meanwhile, the EC’s options aim to co-ordinate priorities at the EU level so far as the allocation of financial and regulatory resources is concerned. In that context it is worth highlighting the main threats and challenges, partly observed at bottom-up levels, for each of the three proposed options.

A shift to the ‘full electric’ option has been in focus since the EC’s Communication ‘Clean Planet for All’.[3]  The electrification of different businesses allows the share of carbon-neutral sources in the energy mix to grow, mostly because of renewables but also nuclear power generation.

However, the direct use of electricity leads to higher expenses in transport, heating and industrial facilities. Added to that, if average wages are taken into account, electricity prices are significantly more expensive in eastern Europe and therefore electrification risks to amplify both social and political divides within the EU. 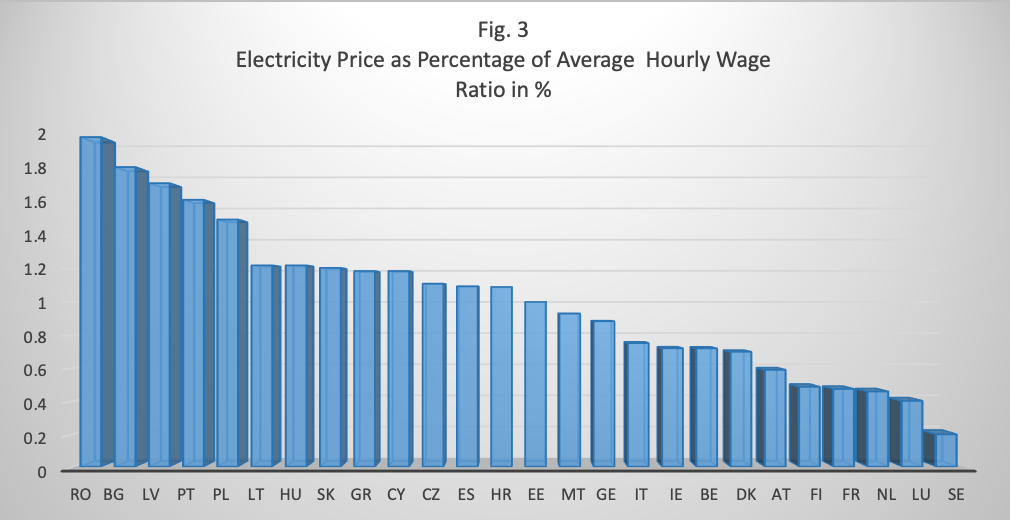 The direct use of electricity on a larger scale implies more electricity production. A recent report produced by Bloomberg NEF indicates that ‘full electric’ option would require 75% more on top of what exists by 2050 [4]. The issue of costs associated with the option provoked a storm of protest from industry. Among others, the Secretary-General of Gas Infrastructure Europe expressed doubts that the conflict between electrons and molecules was a real one. Instead he said both are needed to maintain both sustainability and competitiveness at home and abroad.[5]

As the EC's ‘full electric’ option is inconceivable, much policy attention has been devoted to the second scenario: ‘green gas grid’. Under this option, gas industries must find ways of decarbonising the natural gas sector by promoting carbon capture and storage (CCS) and carbon capture usage (CCU), renewable gases based on biomethane, and using hydrogen instead of methane (see Table 1).

The EC’s second option is still a difficult target to achieve. Thus far, the most successful alternative form of gas has been biomethane. And even though biomethane has already been a success story across a number of European states since the mixture with compressed natural gas used in transport, further growth prospects will depend on the quantity of  biodegradable feedstock necessary for biogas.

Unlike biomethane, hydrogen is attracting attention as a possible path for full decarbonisation by 2050. Theoretically, renewable energy over-generation can be used to produce hydrogen, reducing the waste of energy. [7] At the policy level, Germany and the Netherlands have already pioneered national hydrogen strategies.

In view of the paradigm shift towards decarbonisation of the gas sector and increasing uncertainty as to long-term priorities, EU policy-makers and legislators will have to identify the barriers at the industrial stakeholders’ level. These may be economic, technical or even cognitive in nature.

Insufficient economies of scale may engender risks – either perceived or real – of higher hydrogen prices for the chemicals industry, where hydrogen is the key element in many processes and for which demand will rise from other sectors, such as energy-intensive manufacturing.

Given the headwinds associated with both ‘full electric’ and ’green gases’ options, the business-as-usual reliance on natural gas seems the closest to economic reality, at least at this stage. Despite the growing criticism of gas, expert communities still mostly see gas as the best mid-term solution to the Green Deal. The economic crisis provoked by Covid-19 has only exacerbated the doubts surrounding ambitious decarbonisation targets. As an example, an influential French think tank Fondation de Recherches Strategiques recently proposed renaming the European Green Deal the European Gas Deal mostly because of the economic implications stemming from the pandemic.[8]

But natural gas is still a major source of carbon dioxide and methane emissions particularly upstream and midstream and so generally outside the import-dependent EU. There needs logically to be international co-operation on reducing gas flaring and limiting fugitive methane emissions.

Meanwhile, reliance on natural gas in Europe implies a development of mixed solutions involving penetration of hydrogen and biomethane into the market scheme. Under this option, hydrogen-enriched natural gas (HENG)[9] may speed up the transition to full decarbonisation of natural gas as it implies using the existing pipeline infrastructure, a cheaper option.[10] However, HENG would require further market reforms in order to integrate hydrogen into the existing regulatory framework.

In May 2020 Geode – an industry association focused on electricity and gas grid companies – issued recommendations for regulation prioritising hydrogen’s integration into the market. For instance, Geode points out shortcomings in the existing single market regulatory framework for alternative gases and argues for additional reforms of the single natural gas market and regulation of the pipeline infrastructure.[11]

For example there is still no uniform definition of new gases or what the role of hydrogen is to be. In short, more certainty with legal terms is still needed for HENG to gain a stronger footing in the gas market.

What is more, HENG is still impractical in LNG because of different liquefaction temperatures: -239 °C for hydrogen and -160 °C for methane. And LNG has been the only option for lowering the carbon intensity of the maritime sector particularly when LNG is used as a cryogenic fuel. Thus, bio-LNG solutions based on biomethane liquefaction might gain commercial relevance in the context of decarbonisation targets.

However, liquefied biomethane still remains at the very embryonic stage of development. In this context, one may argue that permit trading would be helpful to integrate biomethane into the fast-growing conventional cryogenic gas market in the maritime sector. Permit trading would make bio-LNG more attractive compared with a direct mix of conventional and bio-LNG. Once again, the regulatory framework needs to be clarified in order to increase validity of bio-LNG in the European markets.

A brief overview of major challenges to the decarbonisation shows that the most affordable of the EC's proposed three solutions is to gradually use less natural gas and more renewable gases, but this option implies additional market reforms, new permit trading schemes and enhanced co-operation with non-EU gas producers mitigating climate change. A regional approach certainly provides more effectiveness in European Green Deal implementation, where some regions move faster than others.

Adjunct Professor at the University of Eastern Finland,

[3] European Commission, A Clean Planet for All: A European Strategic long-term vision for prosperous, modern, competitive and climate neutral economy, Communication to the European Parliament, the European Council, the European Economic and Social Committee, the Committee of Regions and the European Investment Bank, Com (2018)773 of 28.11.2018

[5] Euractiv, Webinar on 13 May 2020, URL: https://events.euractiv.com/event/info/decarbonisation-of-lng-expanding-the-pathway-for-clean-energy-sources-in-europe

[11] Geode. Towards the New Age of Gas Networks Proposal on the Regulation of a European Hydrogen Infrastructure, May 2020, URL: file:///C:/Users/Andrei/Downloads/20200518-GEODE-PAPER-HYDROGEN%20(1).pdf